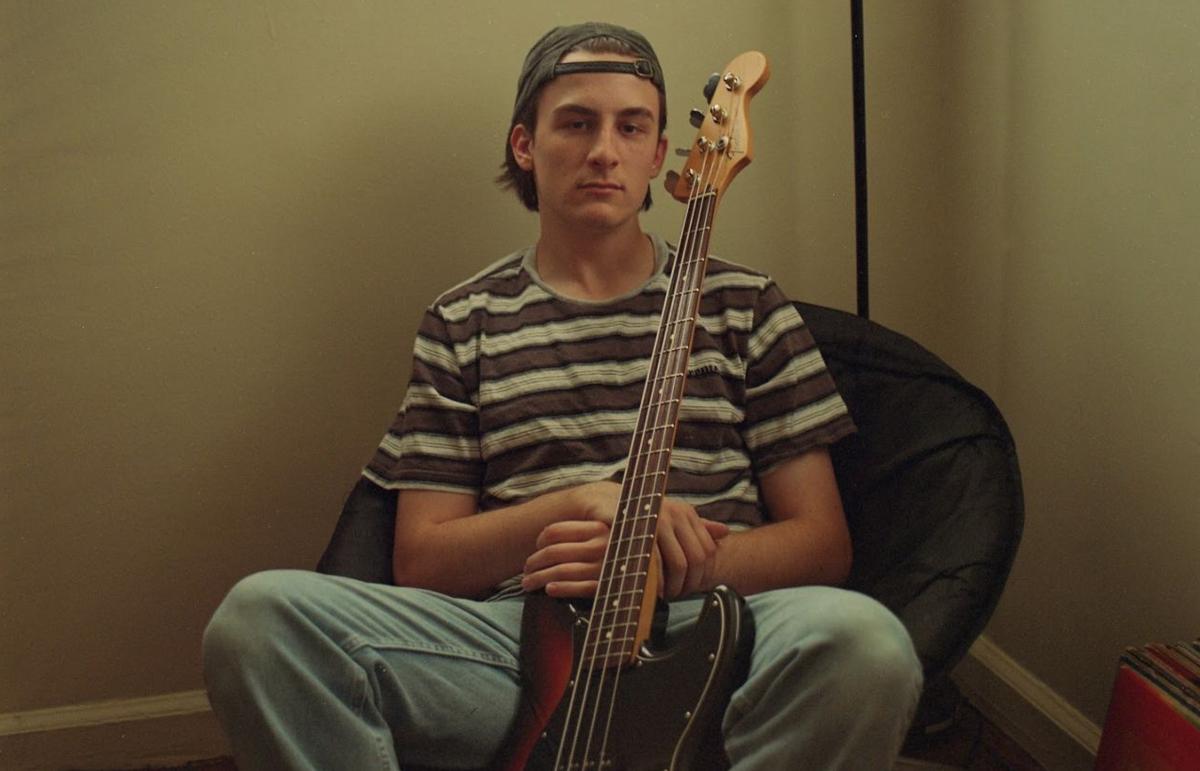 Julian Creech-Pritchett said, “my interest in music stems from my parents having it around.” 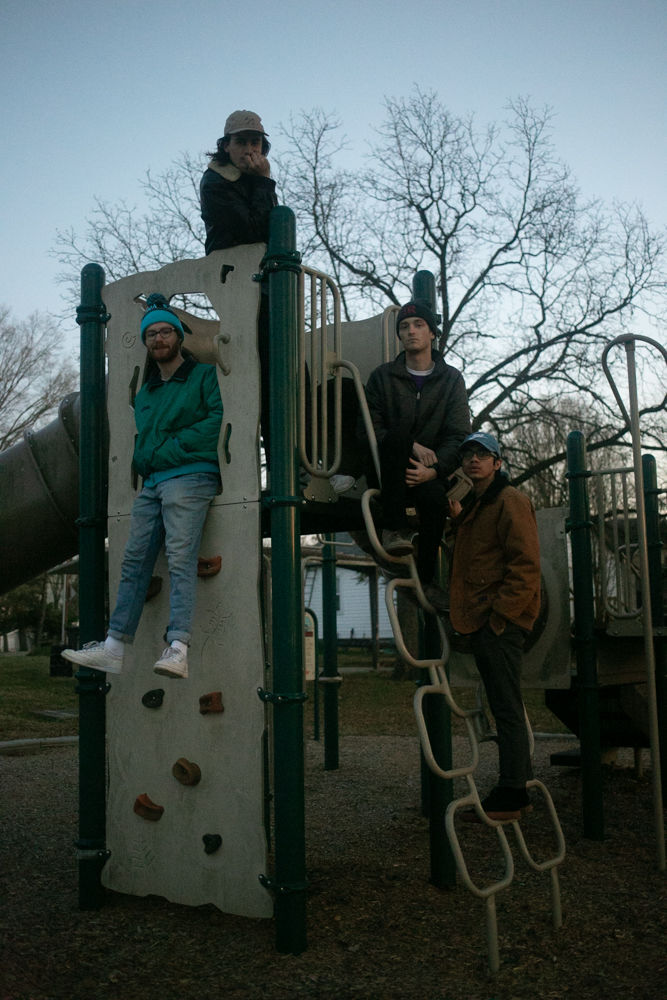 Julian Creech-Pritchett asks for a moment to flip through his record crate while discussing his influences.

“There’s Pink Floyd,” he says. “I’m way big into Pink Floyd right now. Also, King Gizzard & the Wizard Lizard, which is a psych-rock band from Australia. Oh, there’s Tame Impala. Mac DeMarco. The Beatles. The Beatles is a top influence for pretty much every rock band.”

Creech-Pritchett, who plays with local group Sweet Dream, draws inspiration from sources as varied as AC/DC, Wynton Marsalis and Herbie Hancock. On the album “Caricature,” one can hear ‘80s synth and straight-up rock.

In a recent interview, he spoke about his eclectic sound, about Sweet Dream, and about how he derives satisfaction from watching people slow dance.

Both my parents are very musical. They were both in band in high school. My mom played flute, and my dad was a saxophonist and drummer. And, so for me, my interest in music stems from my parents having it around.

As a kid, I spent a lot of time in the backseat of my dad’s car, listening to stuff he was listening to. And that really ignited my love for rock ‘n’ roll. Some of the bands that he really turned me on to were The Replacements, Fishbone, Metallica. I can remember, in particular, when I was 7 or 8 my dad and I were driving around, and he got a CD of “High Voltage” by AC/DC. I listened to a minute of it, and I was like, “Please give me the CD case, I need to see what this is.”

And, my uncle Clyde came over to my parents’ house not too long afterwards with a Fender Stratocaster and a little Fender amp. He heard his little nephew wanted to play, so might as well give him some quality materials.

I think rock or indie rock is a pretty easy general classification. But, I think that if you listen to our album “Caricature,” the music is more than indie rock. There’s some early ‘80s like ballads, some super airy, jangly Mac DeMarco-like vibes. There’s one song that has a drum machine that gives it a club-like feel. The music is pretty diverse.

How long has Sweet Dream been around?

I write all the songs, play all the instruments. But when we play live, I have three other band members, all better musicians than I am. I can take my song, show it to them, and they can figure it out really fast. I’m endlessly thankful to my bandmates — James McLaughlin who plays keyboards, guitar and does backup vocals; Ramon Garcia on the bass; and Nick Moshinski on the drums.

I don’t have a particular set-in-stone creative process, where something happens the same way every time or most times. But, two-thirds of the time, I’ll start with a guitar part, because I’m primarily a guitar player. I’ve been getting more into writing songs from the drum set, just because I’m trying to bring in as much rhythmic stuff as I can, and I’m just listening to stuff like Tame Impala’s album, which just has really fantastic drum parts all over it. I think there’s always more to learn and more to try.

I probably record the drum set on a track first. I figure if I record the drums first with a click track, it’ll be on time. Then, I’ll play the additional instruments along with the drum. And then, after recording, I’ll spend a lot of time mixing.

If I’m playing with Sweet Dream, I have to say Pond (a psychedelic rock group from Australia). I almost got to see them in 2018, and I passed up on the opportunity, because I wasn’t hip to them yet, but then I got really into them two months later. But opening for them is a bucket list (item).

Do you ever sing karaoke or sing in the shower, and, if so, what do you sing?

I’ve never sang karaoke in the formal sense, as in going to a bar and getting on a karaoke machine. But, I definitely sing all the time, including the shower. But most recently, I’ve been singing in the car a lot, because I’ve been doing DoorDash to pay my rent since the pandemic started. So, I’ve been taking opportunities to get more in touch with songs that I love and sing those songs.

We have a song, “With Me,” on the album “Caricature.” It’s one of those ‘80s-type ballads. And I tell people when I play it, “Hey, if you want to slow dance, if you’ve been looking across the room at a certain person, now’s the time.” It has an ‘80s prom kind of vibe. And people will slow dance. That shoots me to the moon every time.

What’s your favorite song to play?

My favorite cover to play is “In the Flesh” by Pink Floyd. We did a tour last year, and we started every show with that song.

We also have a song on “Caricature” which is called “Free.” Both those songs are in the key of A. So we would do a transition, and not stop between the songs. Starting with “In the Flesh,” it’s pretty epic.

My favorite original song to play live is “Heartbreaker by Design.” There’s a section on the recording that goes into a little drum solo. When we do it live, I tell Mr. Moshinki to just go off. He’s a classically trained percussionist, and he has a lot of tricks in his bag. And then after the drum solo we add a bit of “Take Five,” by Dave Brubeck, so that’s a little interlude part, and then transition back to “Heartbreaker by Design.”

Regarding Sweet Dream, I have one and two-thirds albums in various states of being finished. So you can probably expect another album within a year.

And I started making some not-quite-house-music, but some dance beats with my friend. Maybe we’ll put out a project.

Julian Creech-Pritchett was nominated for this questionnaire by The Dune Sea. To read that feature, go to greensboro.com/gotriad.

Arts Council of Winston-Salem & Forsyth County will host a premiere tribute concert honoring the life and legacy of pianist and friend, th…

Julian Creech-Pritchett said, “my interest in music stems from my parents having it around.”