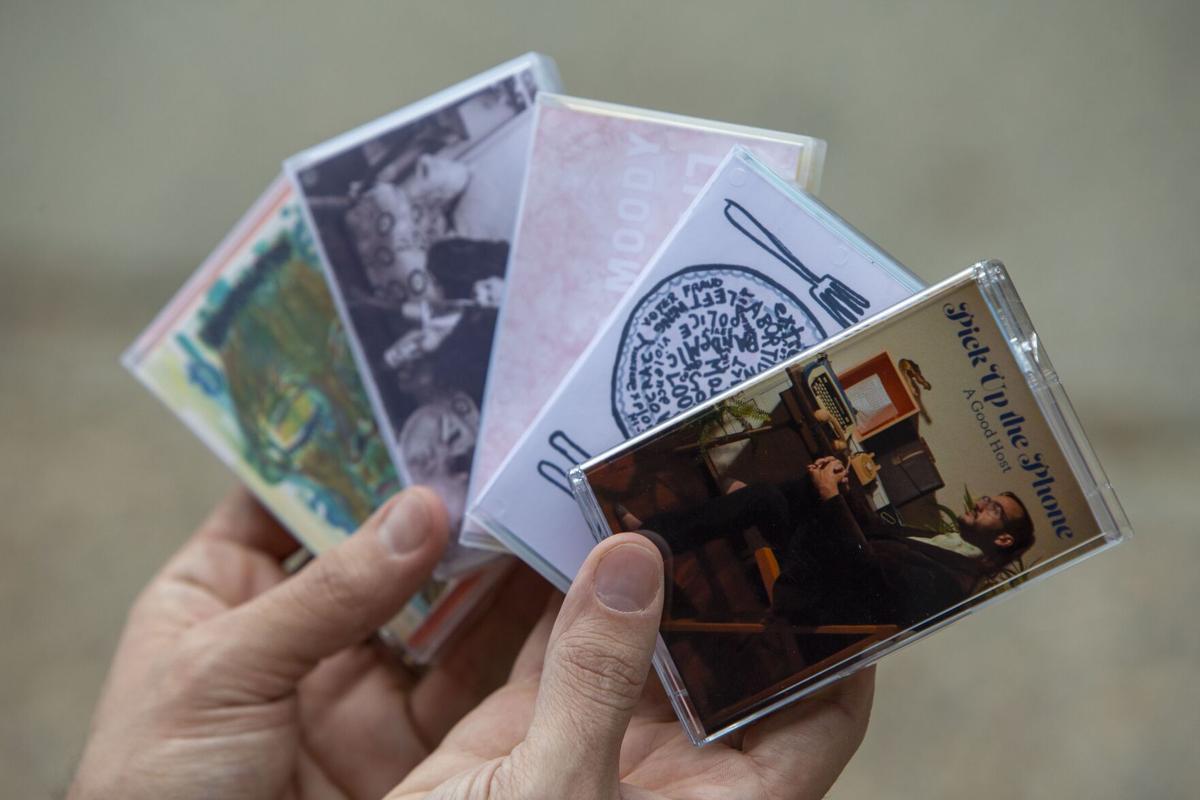 Joseph Carlough of Philadelphia owns the all-cassette music label This & That, which he runs from his East Falls home. He’s part of a new revival for the beloved old format. 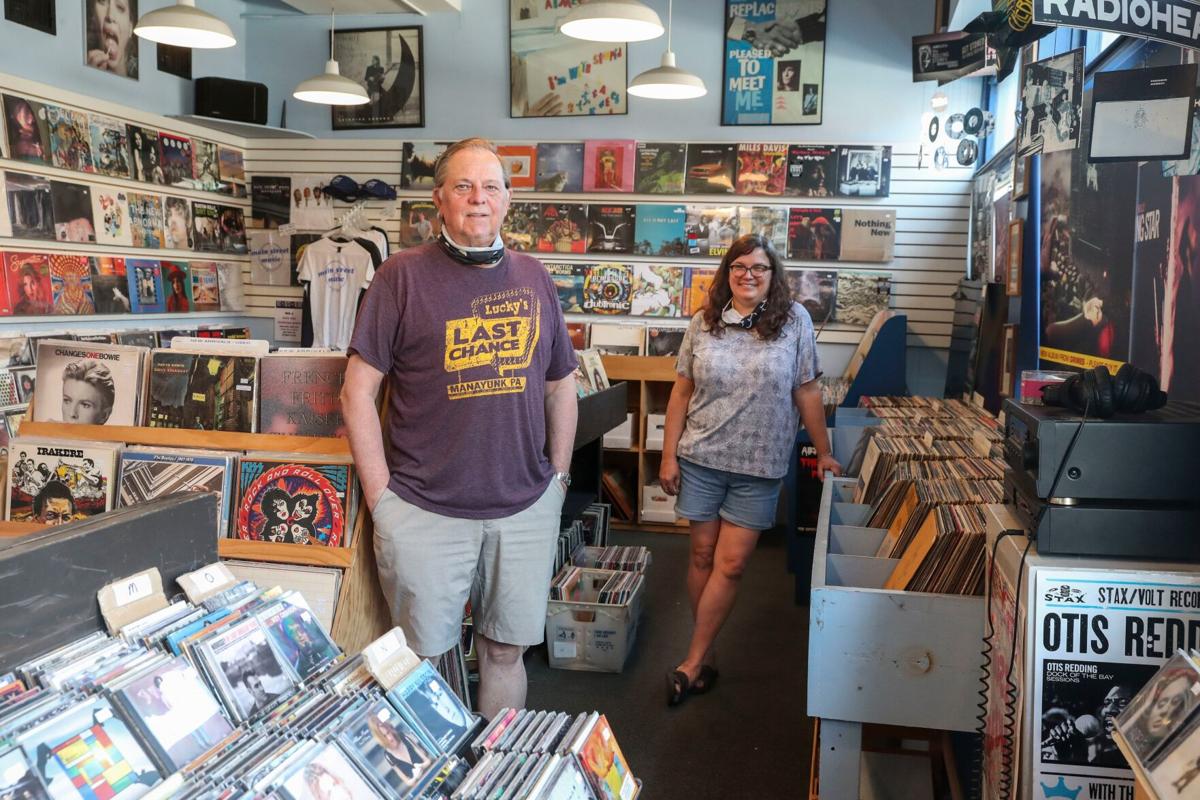 PHILADELPHIA — The vinyl resurgence has been keeping independent record stores alive for years, and it hit a milestone in 2020: Music fans spent more money on LPs than CDs last year for the first time since 1986.

But the desire to possess an analog recording that you can actually hold in your hands — in a streaming era when everything seems ephemeral — isn’t limited to records. It’s now also about cassette tapes, which are making a comeback.

On Discogs, the online database where fans buy and sell vinyl and other physical products, U.S. cassette tape sales were up 33% last year.

Part of the appeal? New tape releases are cheaper than new releases on vinyl. Phoebe Bridgers’ 2020 album “Punisher” sells for $23 on vinyl, said Pat Feeney, owner of Manayunk’s Main Street Music, which this month started to once again devote store space to cassettes. In a florescent green limited edition cassette, “Punisher” went for $10.

The rare-cassette market is also robust, particularly for hip-hop releases from the golden age of the genre, when cassettes were also at their peak. A mint copy of “Illmatic,” the 1994 debut album by Nas, was on sale on Discogs this week for $13,999.98.

Beyond that, there are music labels, such as This & That Tapes, which Joseph Carlough runs out of his East Falls home, that deal exclusively in cassettes.

For Carlough, 34, who founded the label in 2019, the appeal of the cassette is its homemade quality. “Cassettes are like the zines of the music industry,” he says. “Anyone can make a cassette.”

The fragility of the medium — and even the tape hiss — is part of the aesthetic appeal, Carlough says. “There’s something satisfying about watching the wheels turn while you listen, and knowing, ‘I made this.’”

When the medium’s inventor, the Dutch engineer Lou Ottens, died this month at age 94, he was remembered internationally for creating the iconic object, which gave rise to the cherished mixtape.

While it takes just minutes to put together a playlist on Spotify or Apple Music, making a cassette mix takes time and tender loving care. As Rolling Stone writer Rob Sheffield put it in his 2007 memoir about music and grief: “Love Is a Mix Tape.”

“I love cassettes,” says Talcum, 58, whose given name is Joe Genaro. “I have a love-hate relationship with them — they’re in boxes in my house all over the place. They were the first thing I started recordings on when I was a teen.” He has an ongoing project digitizing old Milkmen shows recorded on cassette tapes and posting them on jacktalcum.com.

The medium still appeals, he says. “A mixtape is cooler than a mix CD, or a playlist. You can put strange funny things and sound effects in there. There’s something human about them.”

Most This & That tapes — like the 2021 release “Mourning Moon,” by Tacoma, Wash., songwriter Lauren Napier and “Pick up the Phone,” a recent one under Carlough’s own synth-pop stage name, A Good Host — are issued in batches of a few hundred.

But cassettes aren’t just small business. The medium took a turn back into the mainstream with 2014’s “Guardians of the Galaxy,” in which Chris Pratt’s character listens to a mixtape of ’70s hits on his Walkman that’s his only connection to his mother. That soundtrack mix was issued on cassette and became a hit, as have three recent volumes of soundtrack tapes from the Netflix series “Stranger Things.”

In a sure sign that cassettes are a cool object of the moment, Urban Outfitters now sells both cassette tape releases and cassette tape players.

Hot cassette releases on the Urban website include Taylor Swift’s “Evermore” and Arcade Fire’s score to the 2013 sci-fi movie “Her,” which came out last month and is designed to look like a homemade cassette.

Demand for vintage tape players is also spiking. “I bought so many Walkmen for $4,” says Carlough. “Now they’re going for $30 or $40.”

“The kids see ‘Stranger Things’ and then they find a bag of cassettes in their parents’ basement, and it starts from there,” Perez says. “A lot of people, millennials, people in my generation, are really into thrifting, looking for clothing, or anything old. That’s a big part of the culture.”

The medium has a strong emotional hold on Perez. His parents emigrated from Bolivia, where his father had owned a record store. Relatives kept in touch by sending tapes with a mix of songs and personal messages.

“My grandparents would be like, ‘We miss you, have you forgotten about us?’ And by the end of Side B, everyone would be a little tipsy. It was beautiful.”

For me, digging through racks of old tapes and excavating the past has made pandemic lockdowns less lonely.

Sometimes even the empty case from a long-ago homemade mixtape send me to Spotify to re-create a playlist. That happened with a 1990s road trip mix I made called “Lost Highway” that had included two versions of the title song, by Hank Williams and Jason & the Scorchers.

An office cleanup turned up a stellar mix made by a friend of a friend sometime around 1993. Titled “Charlie Parker, Forgive Me for Not Answering Your Eyes,” it featured Jack Kerouac, Sonic Youth, Katie Webster, and Thomas Mapfumo. My life flashed before my eyes.

This week, I came up with a haul of used tapes from Common Beat Music in West Philly, bringing home Pete Townshend’s “Empty Glass,” Jimmy Witherspoon and Ben Webster’s “Roots” (for $1), Kris Kristofferson’s “The Silver Tongued Devil and I,” and “Burn in Hell” by the metal band Sinister Purpose.

My favorite acquisition, though, was “Sound Defects,” by Philly punk stalwarts F.O.D., on the local SRA label. I bought it mainly because its cover is an homage to “Sound Affects,” the 1980 album by one of my favorite bands, The Jam.

When I opened it, I not only found a download code for the digital album, which was a nice bonus, but also learned the cover was designed by renowned Philly album cover artist Perry Shall, which he made exclusively for the cassette release. Score!

The national tour of the Broadway megahit "Hamilton" will make its Triad premiere in April 2022 at the new downtown Steven Tanger Center for the Performing Arts in Greensboro.

Scaled-back EMF will return with summer of live music

“We are thrilled to be among the first arts organizations in our community to return to live and in-person concerts and educational programs this summer,” said Chris Williams, executive director of Greensboro-based Eastern Music Festival.

Back in the day, an inexpensive Italian restaurant served as backdrop for my college date nights. Red and white vinyl tablecloths. The wafting…

GREENSBORO — Graham Sharp had never made a record outside Steep Canyon Rangers, the Grammy Award-winning bluegrass band with which he has play…

For the first time since 2019, the VF Seasonal Plaza fountain will reopen on Saturday at LeBauer Park, 208 N. Davie St. Weather and public safety permitting, the fountain will operate from 10 a.m. to 8 p.m. daily.

Author among those participating in upcoming Greensboro Bound festival

John Hart, the author of six New York Times bestsellers, will be among those participating in the upcoming Greensboro Bound festival, which is…

Joseph Carlough of Philadelphia owns the all-cassette music label This & That, which he runs from his East Falls home. He’s part of a new revival for the beloved old format.