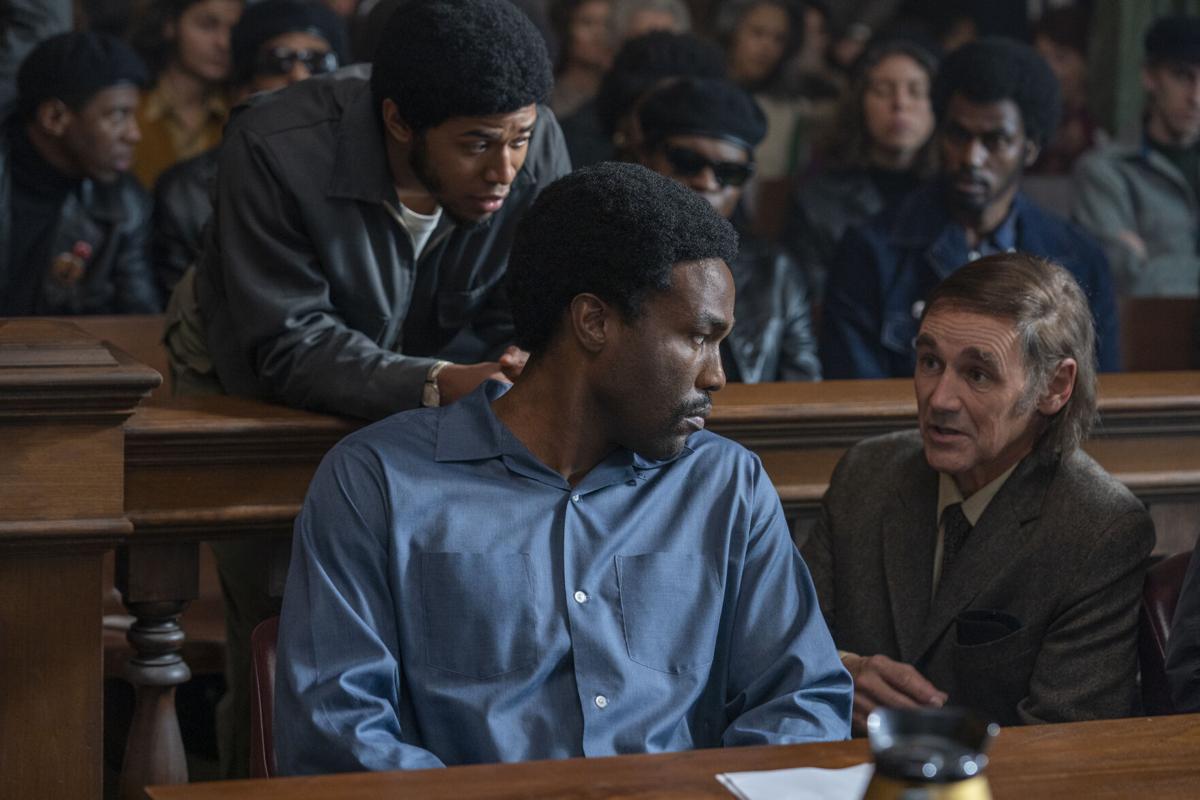 Kelvin Harrison Jr. (from left), Yahya Abdul-Mateen II, who portrays the co-founder of the Black Panther Party, and Mark Rylance (right) in a scene from "The Trial of the Chicago 7." 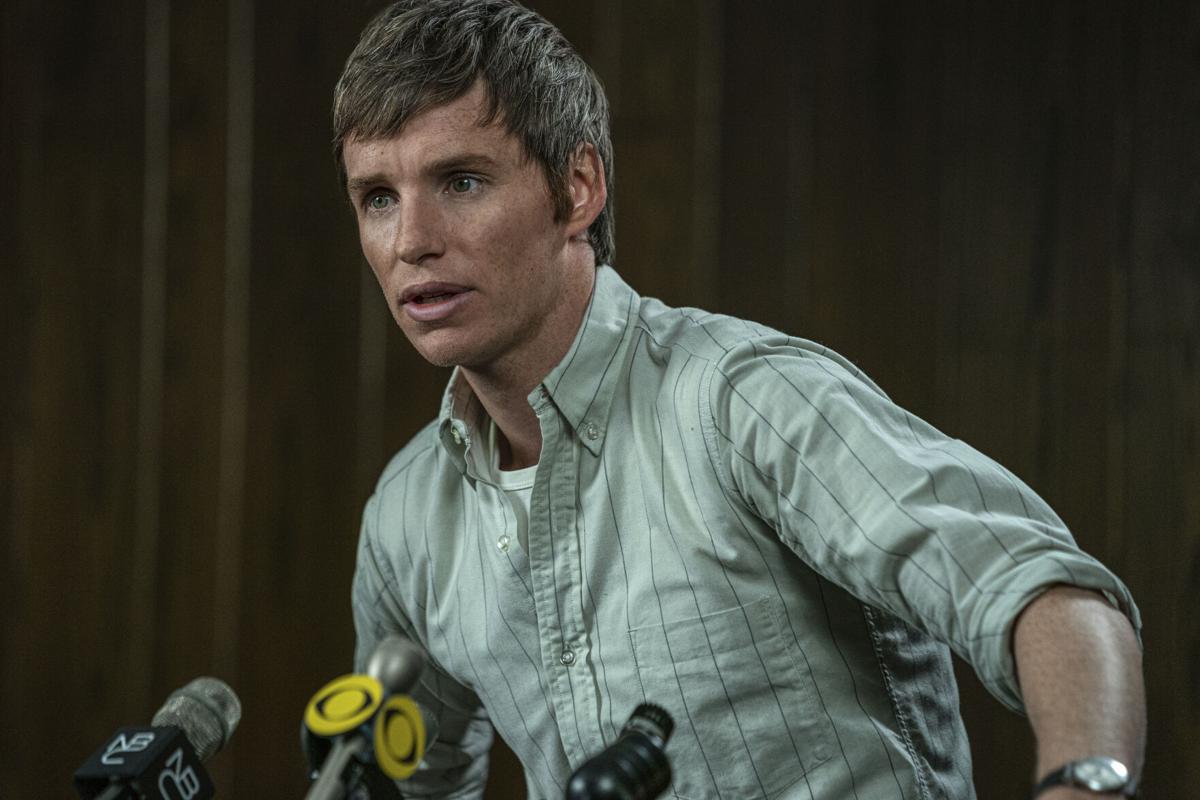 Eddie Redmayne stars in "The Trial of the Chicago 7," a film by Aaron Sorkin, who wrote the script in 2007 (and eventually inherited the directing reins from Steven Spielberg).

J.C. Mackenzie (left) and Joseph Gordon-Levitt, who plays lead prosecutor Richard Schultz, in a scene from "The Trial of the Chicago 7."

Mark Rylance (left) and Eddie Redmayne, who is the Students for a Democratic Society leader Tom Hayden, in a scene from "The Trial of the Chicago 7."

Eddie Redmayne in a scene from "The Trial of the Chicago 7."

These are a few of the things we see and hear in "The Trial of the Chicago 7," Aaron Sorkin's slick, garrulous new movie about the bloody chaos that erupted outside the 1968 Democratic National Convention and the trumped-up legal circus that followed. The echoes of our political present, booming at us from across half a century, are about as subtle as the shouts we hear during the protests and later on the courthouse: "The whole world is watching!" Indeed it was, as it is now.

"The Trial of the Chicago 7" is a juicy courtroom drama, a sweeping '60s panorama, an epic of liberal hand wringing and an all-you-can-eat actors' buffet rolled into one. It also, to its credit, rarely exaggerates its own topicality.

Sorkin, who wrote the script in 2007 (and eventually inherited the directing reins from Steven Spielberg), understands that the story being told here is never not timely. And he and his collaborators have applied their considerable skill to telling that story in as crisp, cogent and streamlined a fashion as possible and to let the present-day implications follow on their own.

One of the pleasures and shortcomings of this kind of Hollywood history lesson is that it seeks to impose a sense of order on events, movements and personalities that are by nature complicated and resistant to easy summary.

Curiously, that narrative strategy subliminally mirrors the tactics of the prosecution, which contends — at the insistence of President Richard Nixon's newly installed attorney general, John Mitchell (John Dolan) — that eight men deliberately masterminded and instigated the 1968 unrest. It's a dubious allegation, privately doubted even by the lead prosecutor, Richard Schultz (Joseph Gordon-Levitt), who notes that some of the defendants had never even met before crossing state lines into Illinois.

We meet them ourselves in a sleek opening montage that immediately casts doubt on the notion that these guys could have agreed on where to have lunch, let alone how to stage a revolution.

In one corner are the Students for a Democratic Society leaders Tom Hayden (Eddie Redmayne) and Rennie Davis (Alex Sharp), who head to Chicago eager to show off the moral and political seriousness of a younger generation of activists.

Thumbing their noses at seriousness, meanwhile, are Abbie Hoffman (Sacha Baron Cohen) and Rubin (Jeremy Strong), whose raucous Yippie spirit — why not protest a war and throw a massive free-love celebration in Grant Park? — will make them the undisputed celebrities of the whole debacle.

Despite their very different aims and methods, the men intend a peaceful protest. Their commitment to nonviolence is echoed by another defendant, the conscientious objector David Dellinger (John Carroll Lynch), and upheld by two mild-mannered scapegoats, Weiner and John Froines (Daniel Flaherty), who have been indicted mainly to make the other defendants look worse.

The worst-looking one of all, in the prosecution's racist estimation, is Bobby Seale (Yahya Abdul-Mateen II), co-founder of the Black Panther Party, who's so incensed at being dragged into the proceedings that he refuses to be represented by the defense's hard-working attorneys, William Kunstler (an especially good Mark Rylance) and Leonard Weinglass (Ben Shenkman).

Seale, forcefully played by Abdul-Mateen, makes clear that he's the defendant with the most to lose. He's also the one most openly scornful of the judge, Julius Hoffman, whose glowering pettiness and bias against the defense couldn't come through more clearly in Frank Langella's supremely belligerent performance.

Seale's eventual mistrial — granted only after he is physically bound and gagged, in a horrifying re-enactment of the trial's most troubling episode — accounts for how the Chicago Eight ultimately became the Chicago Seven, though the numbers have rarely been consistent.

Sorkin takes pains to establish the political-historical frenzy of the late '60s, with early nods to the assassinations of Dr. Martin Luther King Jr. and Robert F. Kennedy, as well as the ever-rising number of American soldiers being sent to Vietnam. But he keeps the fallout at a tasteful, dramatically strategic remove.

The tumultuous four-day convention itself is revisited in archival clips and scripted flashbacks, with a heavy assist from Alan Baumgarten's agile editing and Daniel Pemberton's suitably anguished score. But the full trauma of the riot itself, culminating in ghastly images of blue-helmeted cops assaulting protesters with nightsticks and tear gas, is only briefly allowed to break the movie's meticulously well-argued surface.

As was already clear from "A Few Good Men" and "The Social Network," the legal drama has always been Sorkin's sweet spot, the most natural fit for his pugilistic, process-oriented writing style.

The result is an unsurprising feast of Sorkinese, full of insults and rebuttals, argumentation and one-ups-manship, and it's never more satisfying than when Michael Keaton turns up in a beauty of a performance whose context I wouldn't dream of giving away.

The courtroom's behavioral divide — between the unruly, disruptive language of protest and the judge's authoritarian insistence on civility and order — is shown to be an implicitly political one. Another version of it plays out between the two most adversarial defendants: Tom Hayden, brought to impassioned life by Redmayne, and Abbie Hoffman, whose streak of performative anarchy is such a natural fit for Cohen that it makes the actor's restraint all the more gratifying. (He and Strong's genially stoned-out Rubin make a crack comic duo.)

Hayden wants to play by the rules and effect meaningful change within the system; Hoffman mocks the idea of decorum and seeks a more radical overhaul. Whether or not that strikes you as a nod to contemporary liberal-progressive animus, it's one more reminder, as if we needed reminding, of just how frustrating the pursuit of solidarity can be.

"The Trial of the Chicago 7," smoothly entertaining as it is, may also elude clear consensus. Democracy is a messy business, but an element of real, lived-in messiness seems beyond this movie's purview.

Nearly every major character is forced to grapple with some inner weakness, some unexamined hypocrisy, and you can practically see their arcs snapping into place from the opening frames.

The dialogue pops but rarely overlaps, the way it does in real life, because if it did, you wouldn't be hearing the voice of Sorkin the screenwriter, with his perfectly engineered setups and comebacks. You might actually risk hearing the voices of the characters themselves.

'The Trial of the Chicago 7'

Rating: R (language throughout, some violence, bloody images, drug use)

How to watch: Streaming Friday on Netflix

Television Q&A: What French song is used in a recent Allstate ad?

Some area chain restaurants are celebrating fall and Halloween with specials:

Chocolate and blueberry muffins, whoopie pies and peanut butter and chocolate crackle bars are among the items offered at the Oh Goodness bakery.

Kelvin Harrison Jr. (from left), Yahya Abdul-Mateen II, who portrays the co-founder of the Black Panther Party, and Mark Rylance (right) in a scene from "The Trial of the Chicago 7."

Eddie Redmayne stars in "The Trial of the Chicago 7," a film by Aaron Sorkin, who wrote the script in 2007 (and eventually inherited the directing reins from Steven Spielberg).

J.C. Mackenzie (left) and Joseph Gordon-Levitt, who plays lead prosecutor Richard Schultz, in a scene from "The Trial of the Chicago 7."

Mark Rylance (left) and Eddie Redmayne, who is the Students for a Democratic Society leader Tom Hayden, in a scene from "The Trial of the Chicago 7."

Eddie Redmayne in a scene from "The Trial of the Chicago 7."