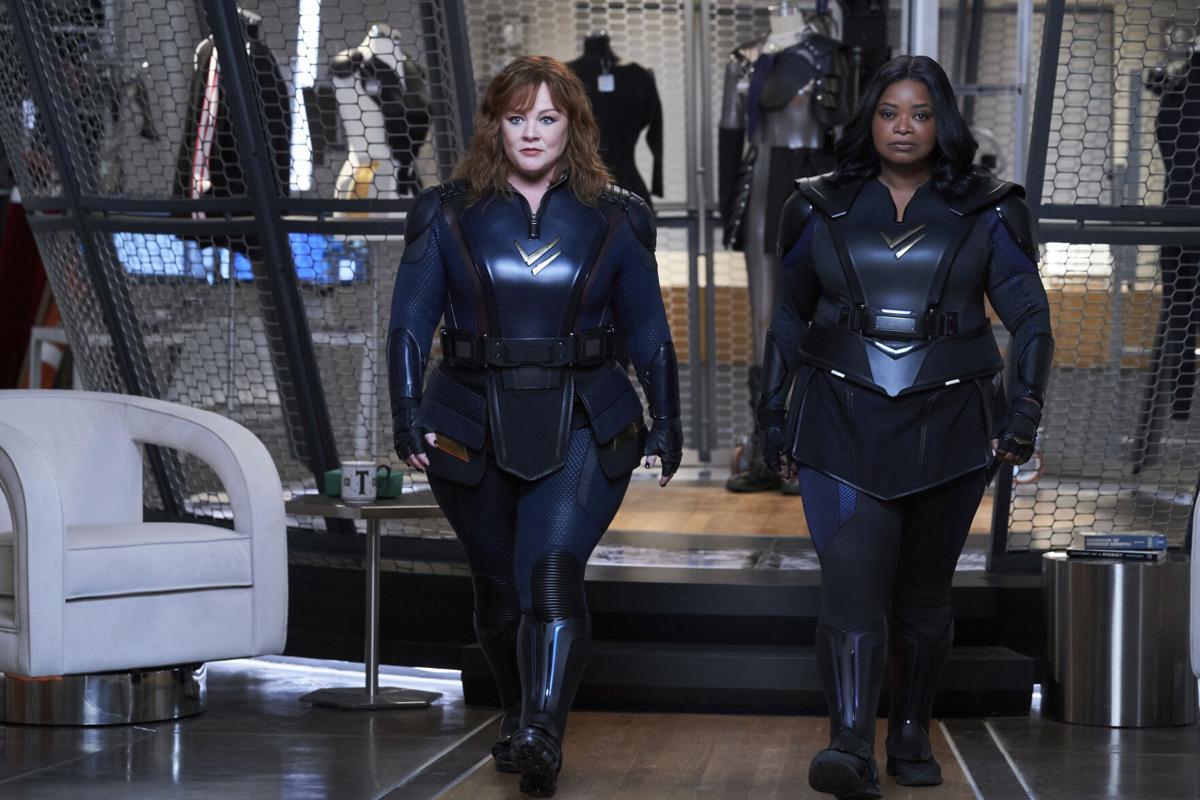 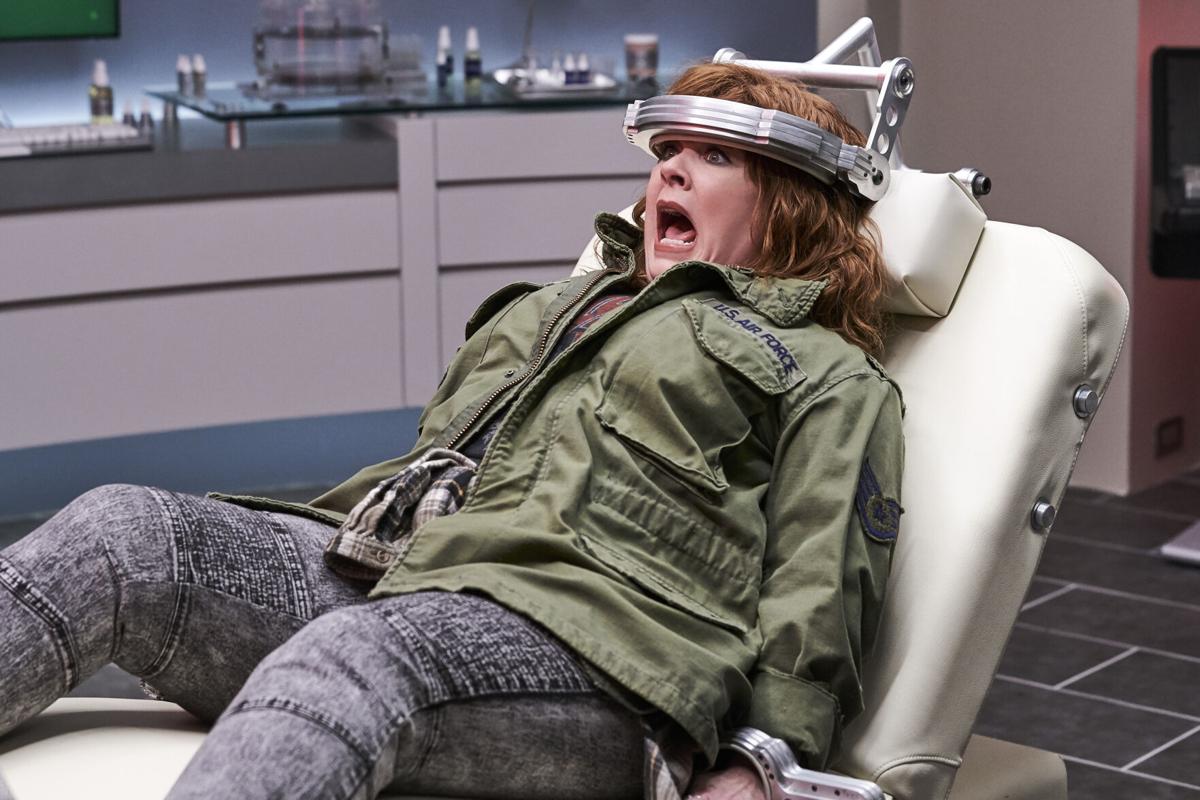 Melissa McCarthy in a scene from the comedy “Thunder Force,” which she co-created with her husband, filmmaker Ben Falcone.

Melissa McCarthy and her husband, filmmaker Ben Falcone, have managed to put out not one but two movies during this pandemic. It prompts two questions: What did we do to deserve them? And how do we stop it?

McCarthy enlists — and immediately wastes — the services of Oscar-winner Octavia Spencer for the superhero buddy comedy “Thunder Force,” a meandering nothingburger of a film.

It’s the fifth team-up between McCarthy and Falcone — they previously did “The Boss,” “Tammy,” “Life of the Party” and “Superintelligence.” It’s clear they’ve gotten progressively worse and McCarthy’s welcome manic, anarchic energy is no longer disarming.

This time around, McCarthy and Spencer play two middle-aged friends who become superheroes after one invents a formula that gives ordinary people superpowers. We’d settle for a formula that makes this film work.

The movie starts in the 1980s as we are introduced to the two girls in high school — Emily is smart and sensible, while Lydia is messy and impulsive. (McCarthy and Falcone’s own daughter, Vivian, plays a younger McCarthy). Emily wants to grow up an be a geneticist. A “lady part doctor?” asks Lydia. Emily responds: “That’s a gynecologist.”

Flash forward to the two as adults. Emily has become a tech millionaire and Lydia a beer-swilling loser still wearing hair-band T-shirts and drinking expired milk.

In this alternative universe, mysterious cosmic rays have turned some humans into super criminals called Miscreants, led by a slumming Bobby Cannavale. Emily vows to stop them by creating her own superhero juice that will offer super strength and invisibility. Unfortunately, Lydia accidentally gets the strength formula.

Cue the montage of McCarthey’s Lydia lifting 20,000 pounds, making 14-foot vertical jumps and pulling a tractor-trailer. Together, Emily and Lydia are Thunder Force.

“Let’s get swole and kick some Miscreant butt,” McCartney says.

Along the way, such bizarre and genuinely funny bits are offered about Glenn Frey, Urkel, Jodi Foster, “The Super Bowl Shuffle” and Seal. And Jason Bateman, McCarthy’s “Identity Thief” co-star, plays a Miscreant with crab claws for arms and is so consistently funny that you’ll wish he had his own film. “What’s his power? Tasting delicious with melted butter?” McCarthy jokes.

This film was in the can before the death of George Floyd and there are a few sour notes, as when a goon is excessively tasered until his skin burns while Emily asks a bystander not to film it on his phone. (“Oh, that’s messed up,” says the store clerk. You bet.) And having a Black woman with the skill of turning invisible in 2021 comes off as a sour note.

But to have two middle-aged actors scrap with bad guys is a treat, even if scenes of them huffing and puffing as they squeeze into a tiny purple Lamborghini is played for laughs a little too long.

There’s also the theme of two women who are complete opposites somehow managing to compliment each other and learning to appreciate what the other offers to their friendship.

“Sometimes I don’t know if I’m mad at you because you always go crazy or if I’m really just mad at myself because I never do,” says Spencer’s Emily.

But that’s just putting makeup on a crustacean: The trailer for the film is way better than sitting through it. It’s a tedious mess to endure and seemed like way more fun making than watching.

How to watch: Streaming on Netflix

Matt Damon hopes Ben Affleck and Jennifer Lopez are back together

Matt Damon hopes Ben Affleck and Jennifer Lopez are back together

Now 90, Avant is a music executive, entrepreneur and film producer. His impact on the music industry was highlighted in the 2019 Netflix documentary, “The Black Godfather."

A list of the events planned for this free festival celebrating books, authors and writing.

Mychal-Bella Bowman, who is from Winston-Salem, will appear in four episodes of the Amazon Prime Video series “The Underground Railroad,” which will premiere May 14. The 11-year-old actress is also a model and is enthusiastic about philanthropy.

WATCH: N.C. A&T senior Victor Solomon continues to semifinal round on "The Voice"

Amid outcry, NBC says it will not air Golden Globes in 2022

Amid growing pressure on the Hollywood Foreign Press Association, NBC said Monday that will not air the Golden Globes in 2022.

The Carolina Theatre of Greensboro has offered thanks to essential workers by giving them complimentary movie tickets. Tickets are available for screenings through June 25.

Applications opened at noon Wednesday at ncfolkfestival.com for the "Not Your Average Folk Contest." The public will get a chance to vote to pick the winner, who will perform at the annual N.C. Folk Festival in September and get an eight-hour professional studio recording session.

A 16-year-old "American Idol" contestant has dropped out after a video circulated of him sitting next to someone wearing what appears to be a Ku Klux Klan hood.

Meet a Musician: Emily Stewart says a songwriting club holds her accountable for her craft

Emily Stewart grew up in the journalism business. Her parents owned a newspaper in Monroeville, Ala., and she jokes that she and her brother w…

Melissa McCarthy in a scene from the comedy “Thunder Force,” which she co-created with her husband, filmmaker Ben Falcone.