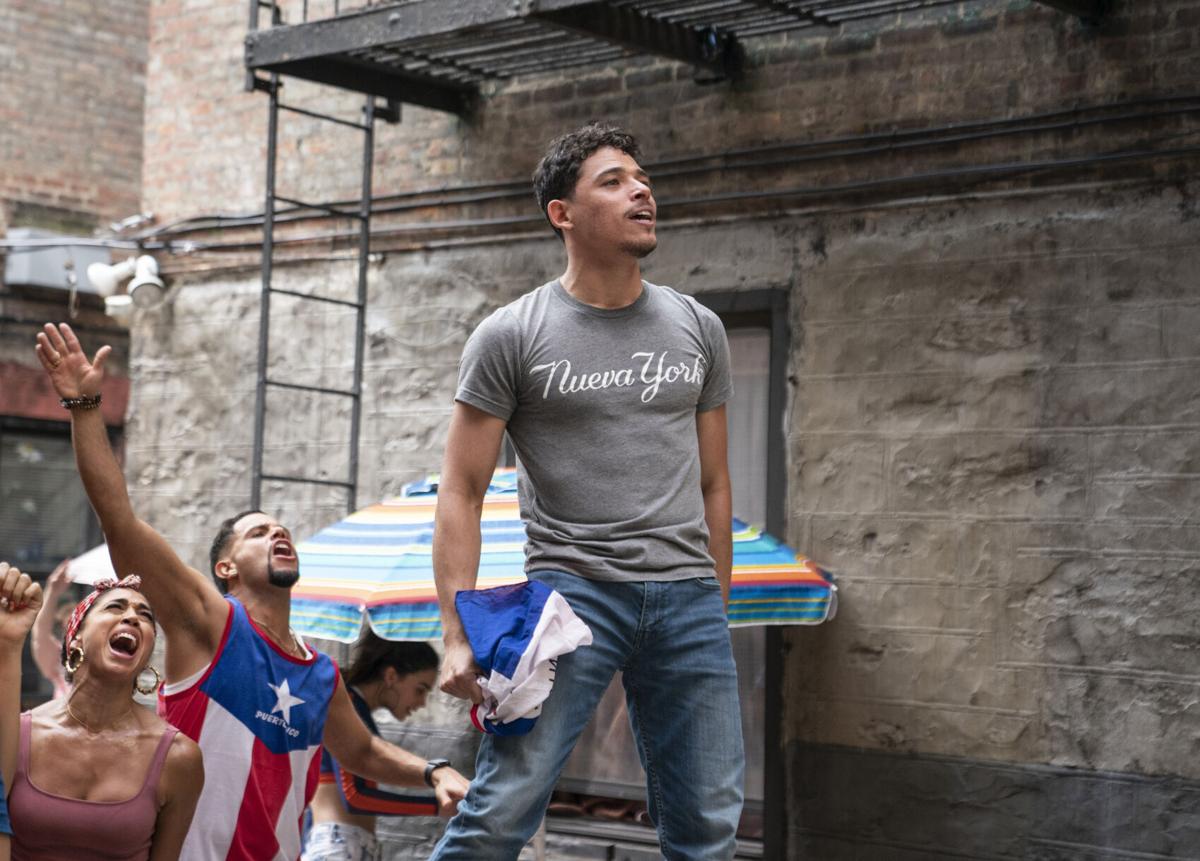 Anthony Ramos in a scene from “In the Heights.” Ramos co-starred in the stage musical of the same name, as well as in “Hamilton.”

Melissa Barrera (from left), Daphne Rubin-Vega and director Jon M. Chu on the set of “In the Heights.”

Noah Catala (from left), Gregory Diaz IV, Corey Hawkins and Anthony Ramos in a scene from “In the Heights.”

Jimmy Smits in a scene from “In the Heights.”

Dascha Polanco (from left), Daphne Rubin-Vega and Stephanie Beatriz in a scene from “In the Heights.”

Before his blockbuster Founding Fathers remix “Hamilton,” Lin-Manuel Miranda burst onto the scene with his Tony-winning ode to his hometown, the musical “In the Heights.”

Set in the gentrifying Manhattan neighborhood of Washington Heights, the earnestly ebullient “In the Heights” firmly established the Miranda signature sound, a blend of hip-hop and Latin music with big, bold, brassy Broadway ballads; a style born and bred of New York City.

The play is seemingly a direct descendant of “West Side Story,” or at least in conversation with it, but Miranda’s outlook is far sunnier than the Jerome Robbins classic. Now, the cinematic adaptation of “In the Heights” seeks to cement the musical’s place in movie history.

Director Jon M. Chu is behind the camera for “In the Heights,” with Anthony Ramos stepping into the lead role of young Dominican bodega owner Usnavi (Miranda plays a local piragua vendor). Chu, who got his start directing the “Legion of Extraordinary Dancers” web series, several “Step Up” installments, as well as the “Jem and the Holograms” movie, a “G.I. Joe” sequel, and “Crazy Rich Asians,” is the perfect filmmaker to adapt “In the Heights,” combining his experience and skill directing dance, music, action and romance to liberate this story from the stage. His version allows the musical to soar above Washington Heights, combining magical realism with gritty urban details.

It’s summer in the city, and a ticking clock counts down the days until a blackout that will push the community to its brink. It’s hot, humid and the hormones are racing. Will Usnavi work up the courage to ask out aspiring fashion designer Vanessa (Melissa Barrera) before he departs New York for the Dominican Republic? Will sweethearts Benny (Corey Hawkins) and Nina (Leslie Grace) reunite while she’s back home from Stanford? What does Sonny’s (Gregory Diaz IV) future hold as a young “Dreamer”? Who holds the winning lottery ticket? These dramas play out against the landscape of a tight-knit but quickly changing community, as rents rise and the older generation transitions.

This will no doubt be a deserving breakout performance for the immensely talented and magnetic Ramos, who co-starred in the stage musical, as well as in “Hamilton.” However, it’s Hawkins, who co-starred as Dr. Dre in “Straight Outta Compton” who stuns in his first screen musical role, as Benny. Who knew he had that voice? Those moves?

Grace and Barrera are also superstars in the making. Mexican actress Barrera owns the screen in every moment, especially in a sizzling nightclub number. The entire film is a brilliantly woven tapestry of performances, music and environment, as well as the choreography by Christopher Scott and cinematography by Alice Brooks, two longtime collaborators of Chu’s.

With Miranda’s music, and a screenplay by Quiara Alegria Hudes, who wrote the book for the stage musical, Chu crafts a brash, culturally specific and celebratory film that is a whole lotta musical. There are Busby Berkeley-style musical numbers, a cast of thousands and characters bursting into song and dance at every moment. It’s sincere, deeply felt and completely, refreshingly unabashed about it.

It’s oh-so-easy to give yourself over to the rapid rhythms and heightened emotions of “In the Heights”: The lights are twinkly, the beers are cold, the pants are tight, the hips are loose and the beat is impossibly infectious.

Be sure to see it as big and as loud as possible to fully experience all the joy this film has to offer. You’ve earned it.

How to watch: Opens today at The Grande, AMC Greensboro 18, Four Seasons, Palladium and AMC High Point 8 or streaming on HBO Max

'In the Heights,' 'The Fast & Furious' franchise, and worst final films, all on the latest 'Just to Be Nominated' podcast!

The hosts of the 'Just to Be Nominated' podcast talk 'In the Heights,' recommend films that 'Fast & Furious' heads would love, take a dip into entertainment news, and more!

GREENSBORO — Grab the popcorn and take a seat on LeBauer Park’s Great Lawn this summer. Greensboro Downtown Parks has announced the return of …

All pairs on this list have the same basic plot once you strip away the details.

Blink and you missed some info about Loki.

In 2018, Pink dazzled audiences in arenas on her “Beautiful Trauma” tour.

Anthony Ramos in a scene from “In the Heights.” Ramos co-starred in the stage musical of the same name, as well as in “Hamilton.”

Melissa Barrera (from left), Daphne Rubin-Vega and director Jon M. Chu on the set of “In the Heights.”

Noah Catala (from left), Gregory Diaz IV, Corey Hawkins and Anthony Ramos in a scene from “In the Heights.”

Jimmy Smits in a scene from “In the Heights.”

Dascha Polanco (from left), Daphne Rubin-Vega and Stephanie Beatriz in a scene from “In the Heights.”