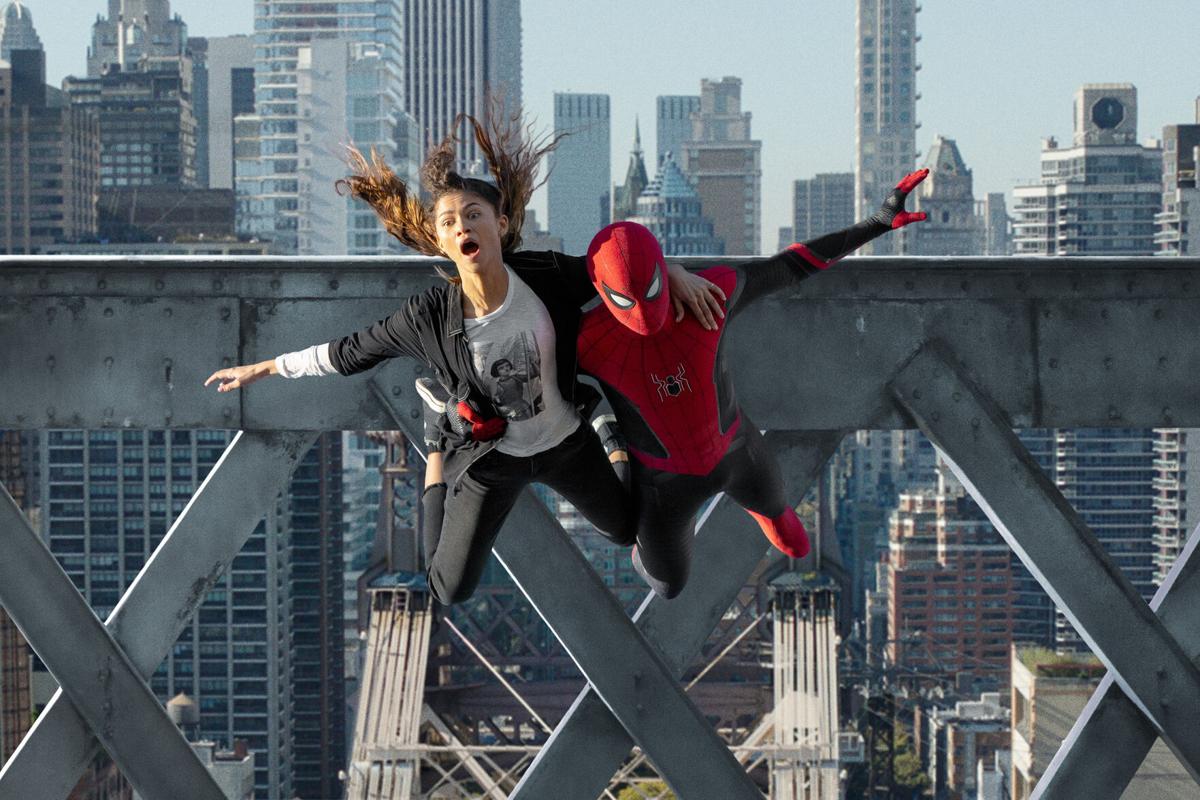 MJ (Zendaya) and Spider-Man (Tom Holland) jump off a bridge in a scene from “Spider-Man: No Way Home.”

Kathryn Hunter in “The Tragedy of Macbeth,” premiering in select theaters on Dec. 25 and on Apple TV+ on Jan. 14. 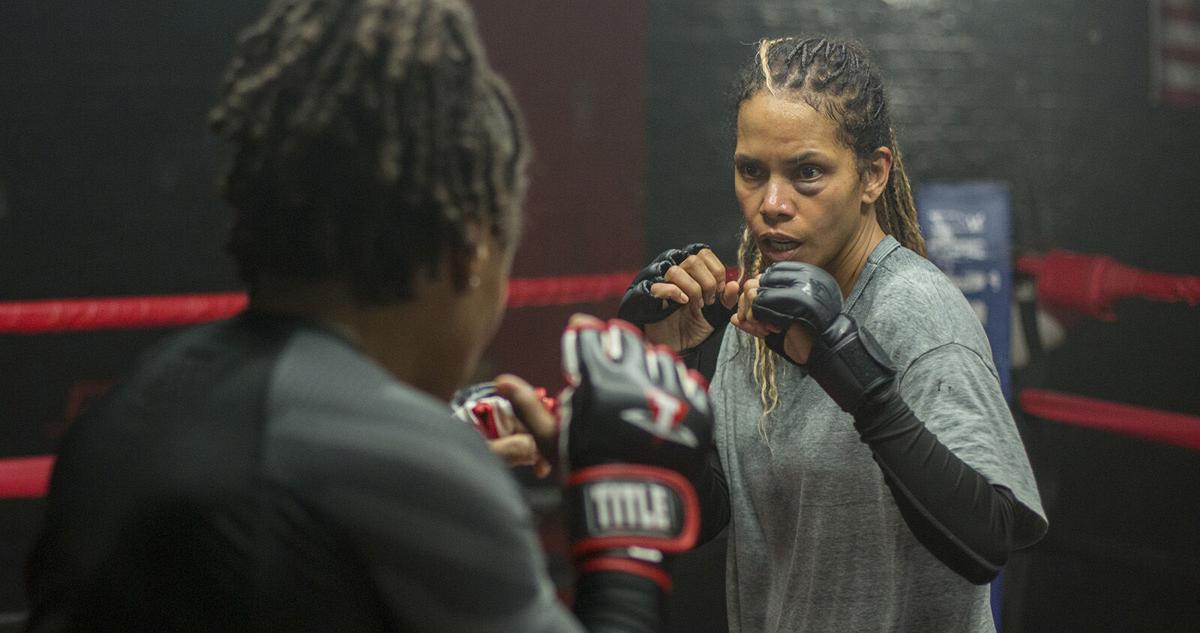 Halle Berry as Jackie Justice in a scene from “Bruised.” 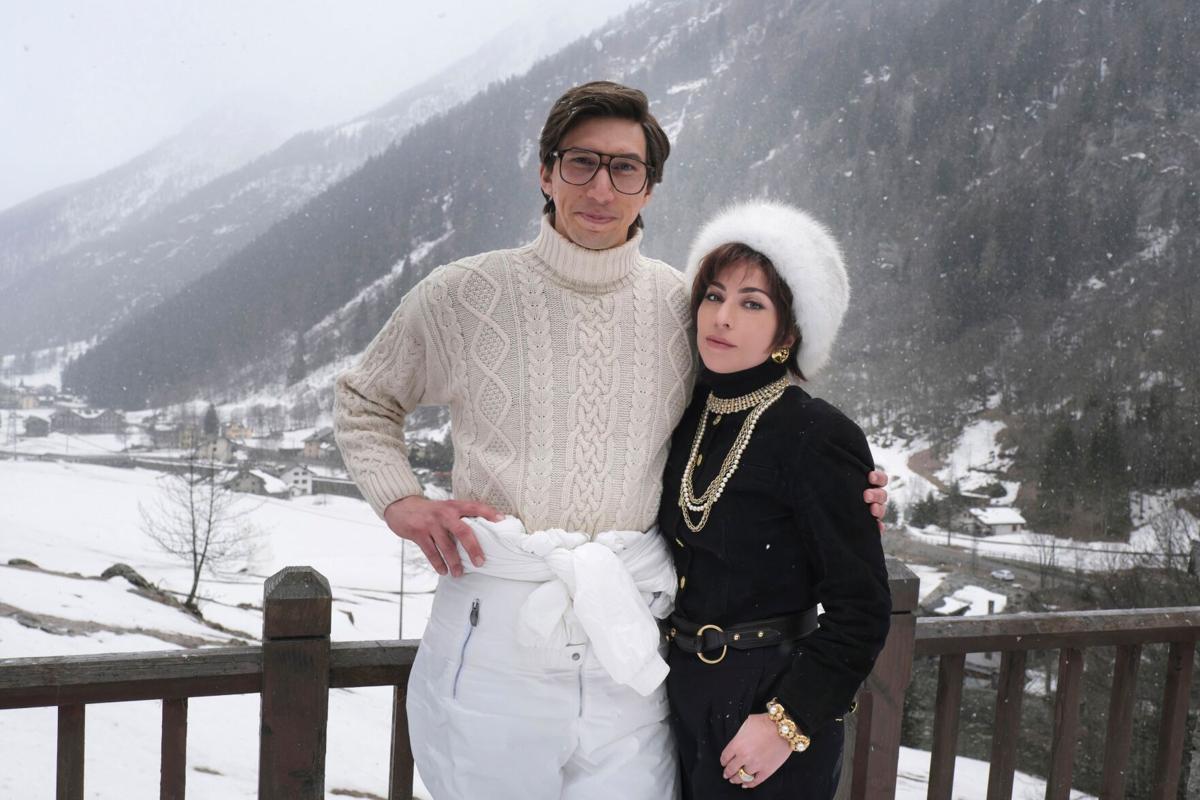 Adam Driver (Maurizio Gucci) and Lady Gaga (Patrizia Reggiani) in a scene from “House of Gucci.” 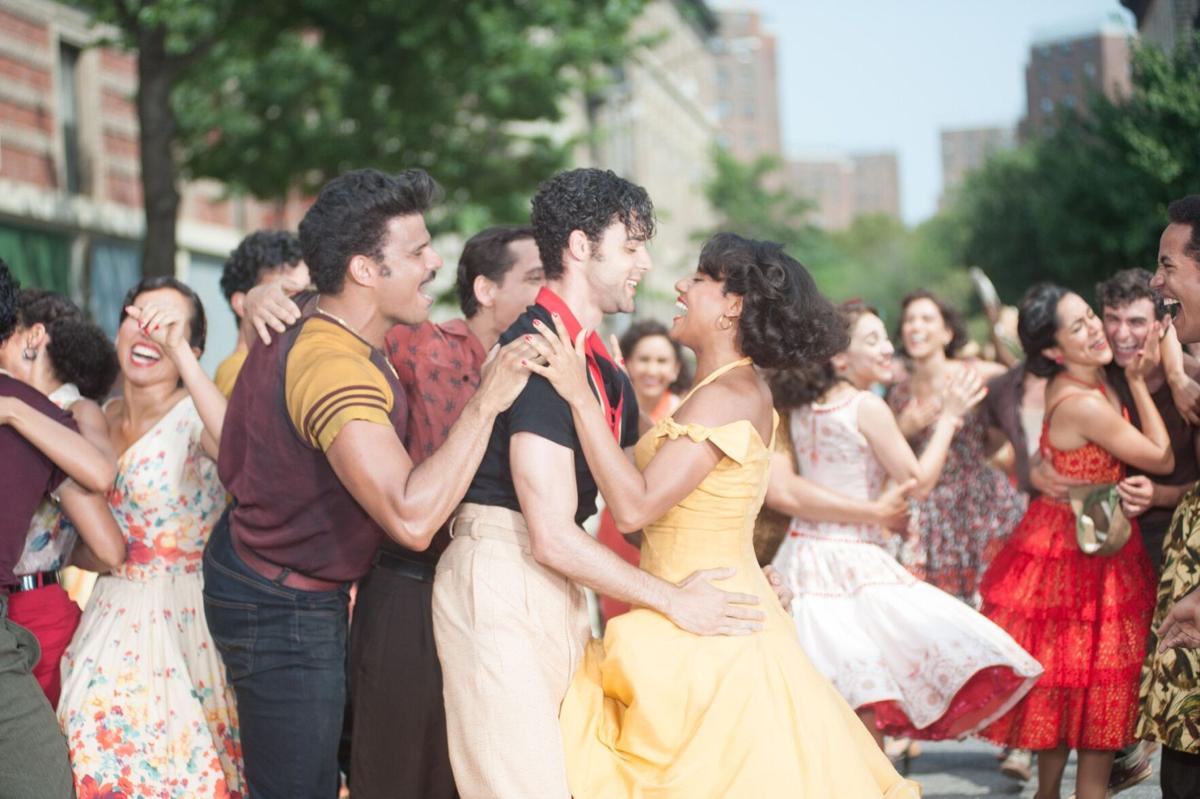 David Alvarez and Ariana Dubose in the “America” scene from “West Side Story,” the movie musical.

Traditionally, the holiday season means family, food, shopping and movies. This year is no exception as Hollywood serves up a wide variety of releases from now till New Year’s. There are animated films, superhero movies, Oscar contenders, sequels, prequels and more.

Here are the films we’re looking forward to the most.

Note: Films are being released in theaters except where noted. Release dates are subject to change.

Synopsis: Disney’s animated fantasy is about a Colombian family who lives in a house that gives every member except for one — a daughter named Mirabel — magical powers. But when the magic is threatened, it’s up to the ordinary girl to save the day. The film features new songs from “Hamilton” creator Lin-Manuel Miranda.

Synopsis: Oscar-winning actress Halle Berry makes her directorial debut and stars in a gritty drama with “Rocky” vibes about a down-on-her-luck former UFC fighter drawn back to the ring with hopes of providing a better life for the young son she gave up when he was born.

Synopsis: This drama about the family empire behind the iconic fashion brand Gucci has everything: a star-studded cast, big-name director, beautiful clothes, not to mention a salacious, based-on-true-events story full of sex, betrayal, scandal and murder.

Synopsis: The seventh film in the franchise based on the popular video game is a reboot and origin story that uncovers the circumstances behind the Umbrella Corporation’s exodus from Raccoon City and the zombie apocalypse that followed.

“The Power of the Dog”

Synopsis: Under the threat of an alien invasion, a decorated Marine goes on the run with his two young sons.

Synopsis: The greatest director of our time takes on one of the most beloved musicals ever. Set to the timeless music of Leonard Bernstein and Stephen Sondheim, the film tells the story of Tony and Maria, young lovers tragically torn apart by their allegiances to rival gangs, the Jets and the Sharks, in 1957 Manhattan.

Synopsis: Nicole Kidman is Lucille Ball and Javier Bardem is Desi Arnaz as writer-director Aaron Sorkin (”The Trial of the Chicago 7″) takes the audience inside the complicated relationship between the Hollywood legends during one eventful week on the set of “I Love Lucy.”

Synopsis: Sandra Bullock plays Ruth Slater, a woman who served 20 years in prison for killing a police officer. Upon her release, she goes in search of her estranged younger sister only to find the sins of her past keep blocking her path to redemption.

Synopsis: From visionary director Guillermo del Toro (“The Shape of Water”), Bradley Cooper plays a con man who teams up with a deceitful psychiatrist (Cate Blanchett) to hustle unsuspecting carnival-goers out of their money.

Synopsis: In the near future, a devoted father (Mahershala Ali) facing a terminal illness is given an unusual choice: to secretly replace himself with a clone to spare his family from the grief of losing him.

Synopsis: Peter Parker’s life is sent into chaos after his identity as Spider-Man is revealed. He goes to Dr. Strange for help, causing a disruption in the multiverse and leading to the return of familiar foes like Alfred Molina as Doc Ock from the Tobey Maguire “Spider-Man” films.

Synopsis: Pulitzer Prize-winning author J.R. Moehringer’s memoir focuses on the writer’s formative years, from growing up in his uncle’s bar to pursuing his passions at Yale.

Synopsis: Buster Moon (Matthew McConaughey) and his talented animal friends dream of putting on a spectacular show in Vegas-like Redshore City. But their hopes hinge on finding and convincing a reclusive lion rock legend voiced by Bono to join them.

Synopsis: The prequel to “Kingsman: The Secret Service” and “Kingsman: The Golden Circle” explores the beginnings of the first independent intelligence agency when the first agents banded together to stop an evil plot by Rasputin.

Synopsis: Hopped up on blue pills, Neo (Keanu Reeves) has no memory of the Matrix, Trinity (Carrie-Anne Moss) or his previous life as the Chosen One. But then a younger version of Morpheus (Yahya Abdul-Mateen II) offers him a red pill, opening his eyes to the post-apocalyptic reality.

Synopsis: Wow, what a cast! Jennifer Lawrence and Leonardo DiCaprio play low-level astronomers who discover a planet-killing comet is on a collision course with Earth. The problem? Nobody seems to be taking them seriously.

“The Tragedy of Macbeth”

Synopsis: Academy Award-winning director Joel Coen tackles Shakespeare in his first film without brother Ethan. Denzel Washington plays an ambitious general who takes matters into his own hands after a prophecy by three witches says he will rise to become King of Scotland.

“A Journal For Jordan”

Synopsis: Based on a true story, Michael B. Jordan (”Creed”) plays an Army sergeant who is deployed to Iraq, where he writes a journal for his newborn son. Bring a lot of tissues.

Synopsis: Peter Dinklage and Haley Bennett reprise their roles from the stage musical based on Edmond Rostand’s classic love story about a man who falls in love with a beautiful woman named Roxanne but deems himself unworthy because of his appearance. Instead, he helps another man win her heart by writing her letters.

Synopsis: Actress Maggie Gyllenhaal makes her directorial debut with this festival favorite, a psychological drama starring Oscar winner Olivia Colman (”The Favourite”) as a woman on a beach vacation whose obsession with a young mother and daughter forces her to confront the sins of her past.

This Thanksgiving weekend is offering a box office feast with two genres that have been lacking on the menu so far this year: family movies and non-franchise films aimed at adults.

The casting, with Kristen Stewart as Princess Diana, is brilliant, and the ending, in a top-down convertible, is sublime. So why is the rest o…

Here's a list of films set to premiere this holiday season through Jan. 28.

Who's going back to the movies? So far, not everyone

While certain segments of moviegoers are closer to pre-pandemic levels, older moviegoers and family audiences have been slower to return.

Ranking the 100 best horror movies of all time

Looking for something scary to watch this weekend? Here's a look at the 100 best horror movies of all time, according to Metascore and IMDb ratings.

MJ (Zendaya) and Spider-Man (Tom Holland) jump off a bridge in a scene from “Spider-Man: No Way Home.”

Kathryn Hunter in “The Tragedy of Macbeth,” premiering in select theaters on Dec. 25 and on Apple TV+ on Jan. 14.

Halle Berry as Jackie Justice in a scene from “Bruised.”

Adam Driver (Maurizio Gucci) and Lady Gaga (Patrizia Reggiani) in a scene from “House of Gucci.”

David Alvarez and Ariana Dubose in the “America” scene from “West Side Story,” the movie musical.