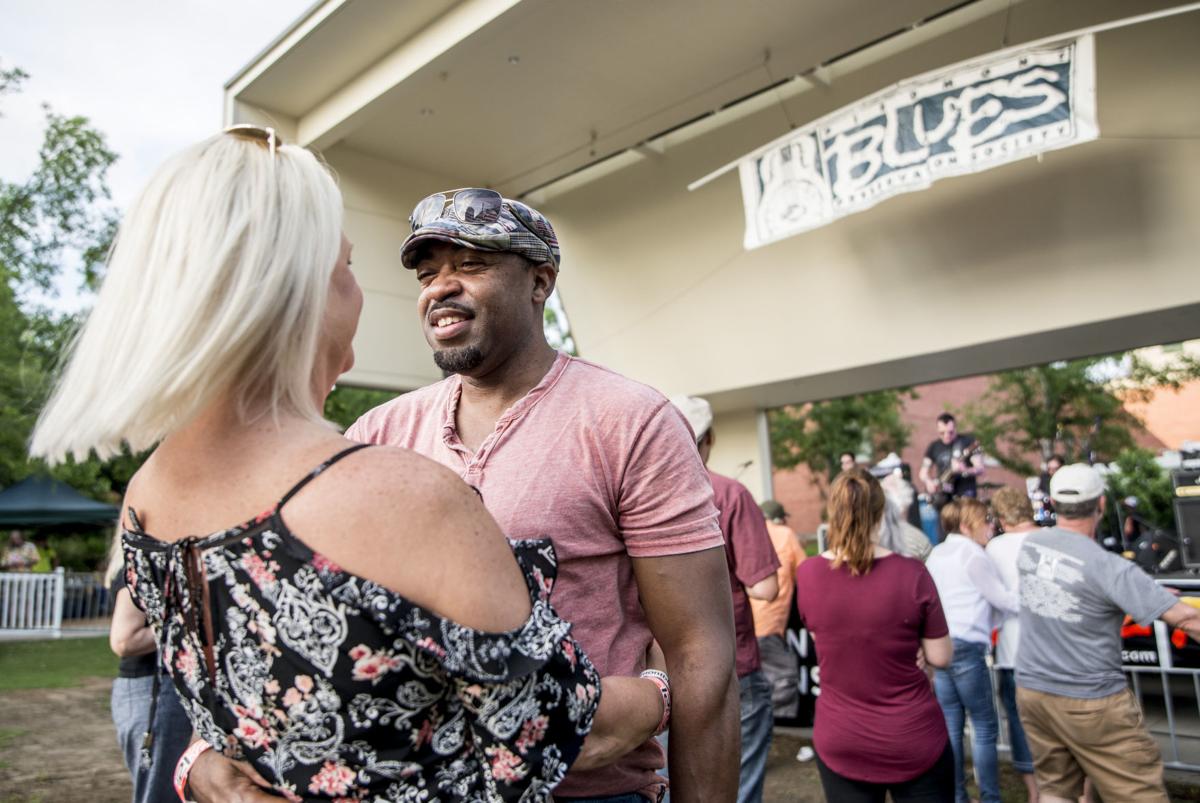 Leslie Cyriaks and Reggie Campbell dance at the 2018 Carolina Blues Festival at LeBauer Park in Greensboro. 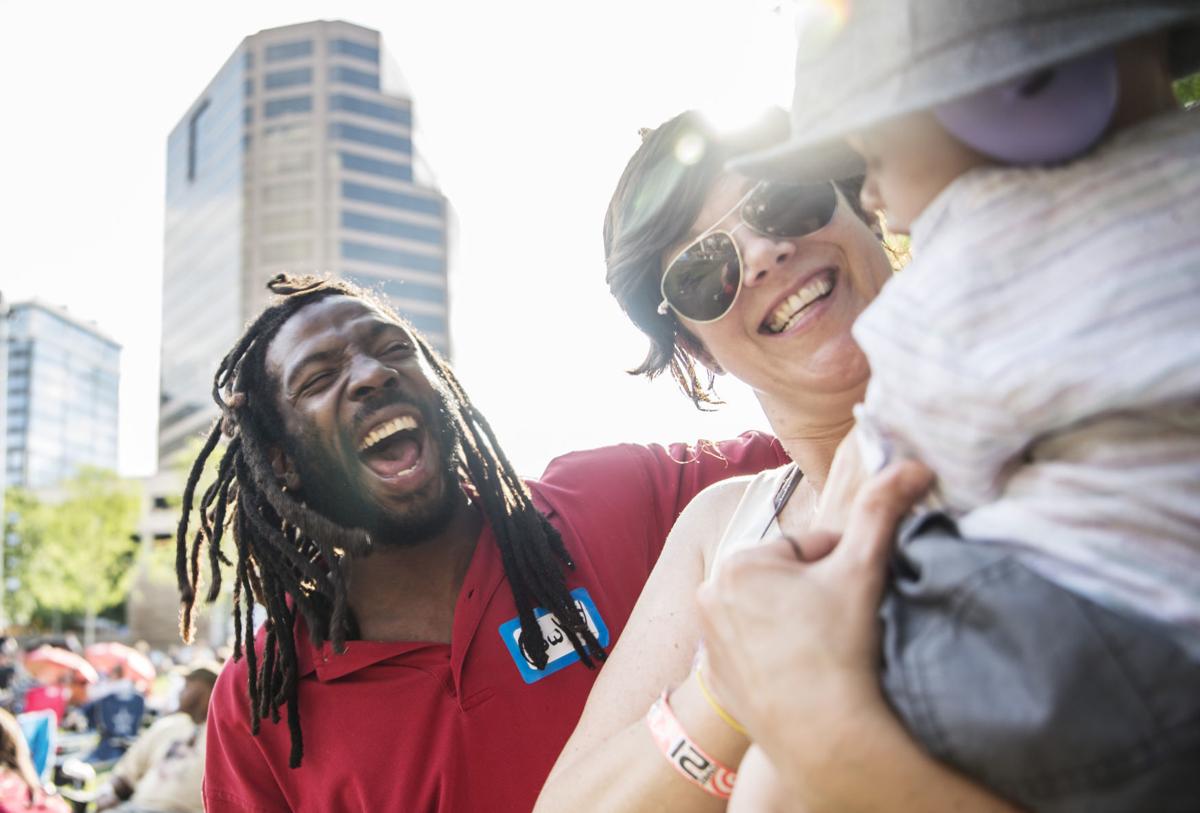 Cowboy Hemphill (left) laughs at 8-month-old Everett Ellington and his mom, Tanya Sheek at the 32nd annual Carolina Blues Festival at LeBauer Park in Greensboro, N.C., on May 19, 2018. 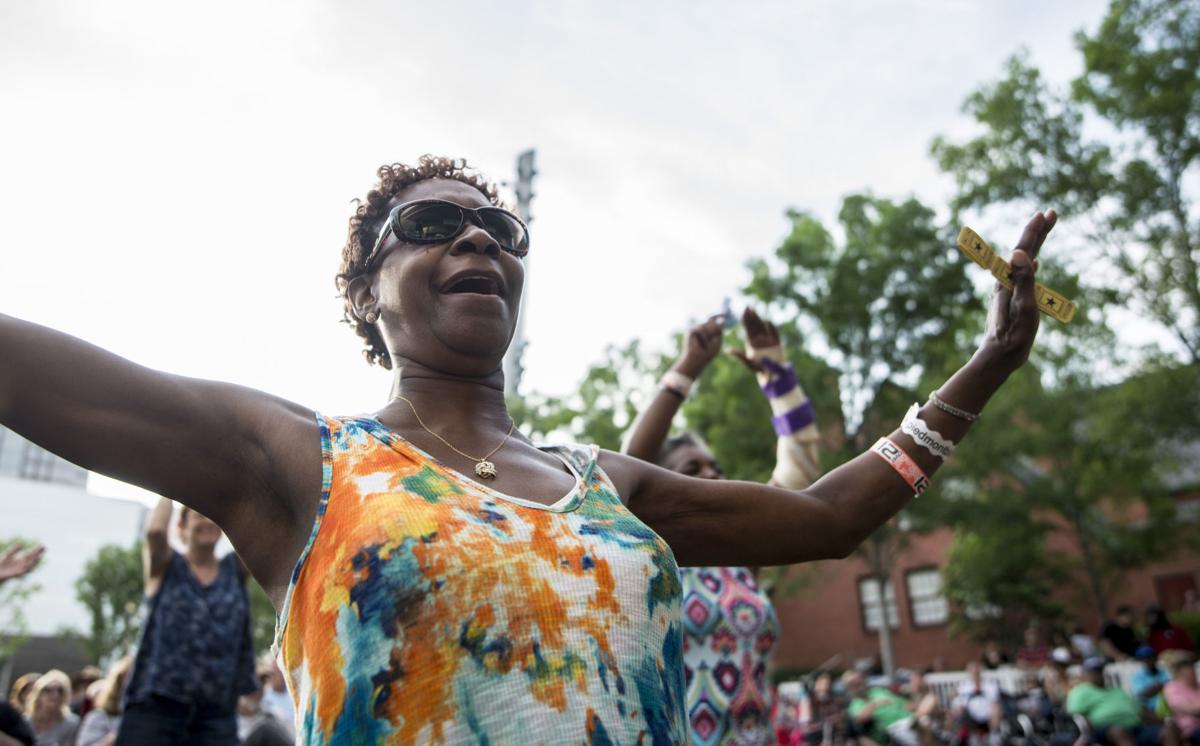 Patsy Swift cheers at the end of a song at the 32nd annual Carolina Blues Festival in 2018. This year’s festival will be May 18-19. 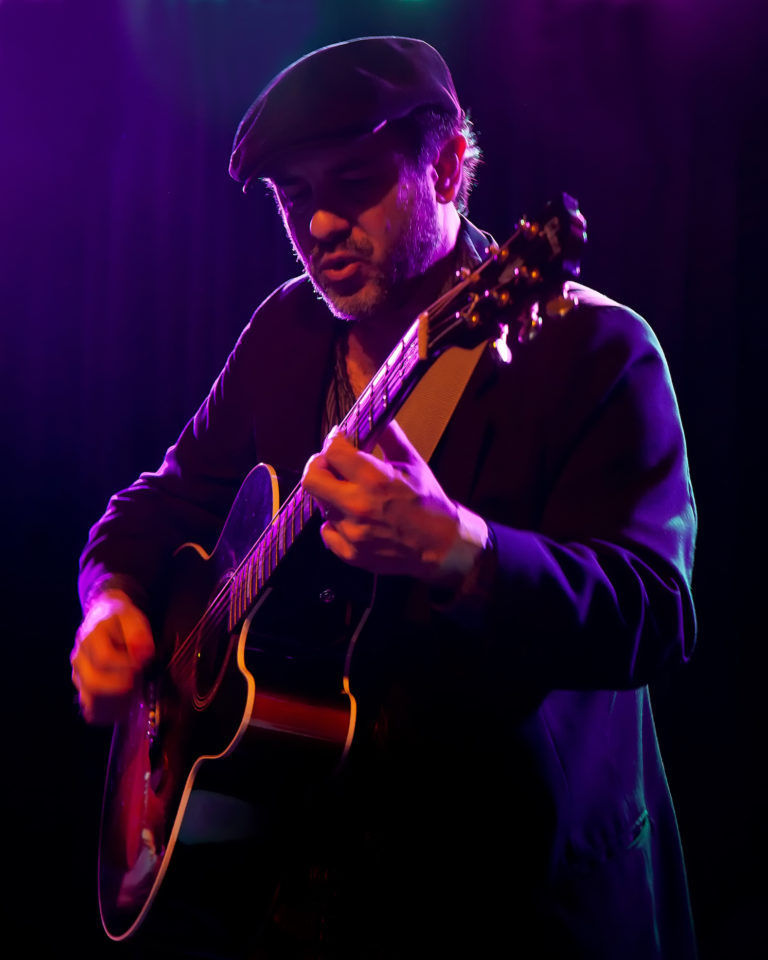 Guitarist Jon Shain beat out 200 competitors to take first place in the International Blues Challenge’s Best Solo/Duo challenge in Memphis. He will perform at the 33rd annual Carolina Blues Festival in downtown Greensboro. 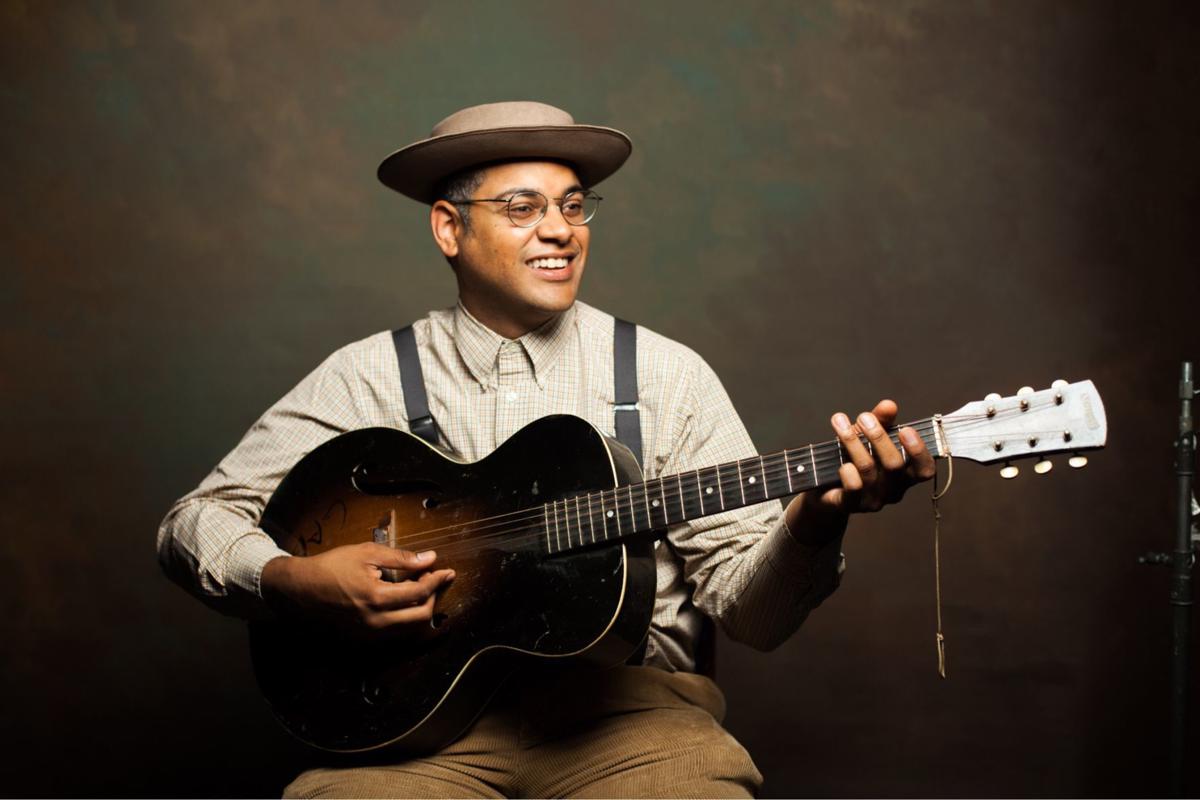 õ Dom Flemons will headline the festival. Also playing will be

À House of Dues of Greensboro and Ã Melva Houston of Mount Airy. 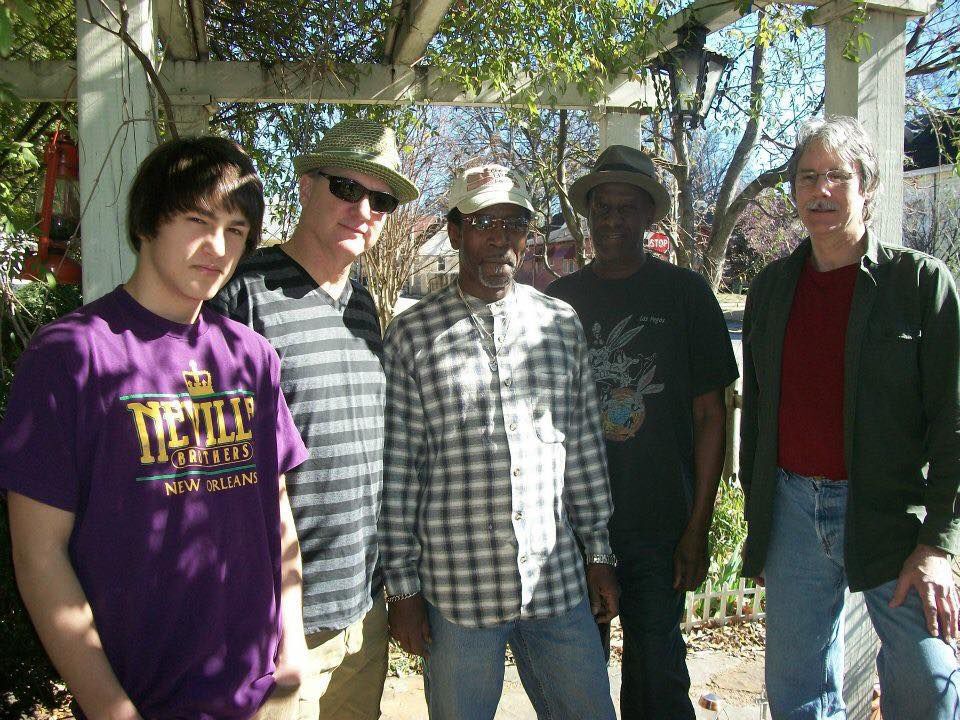 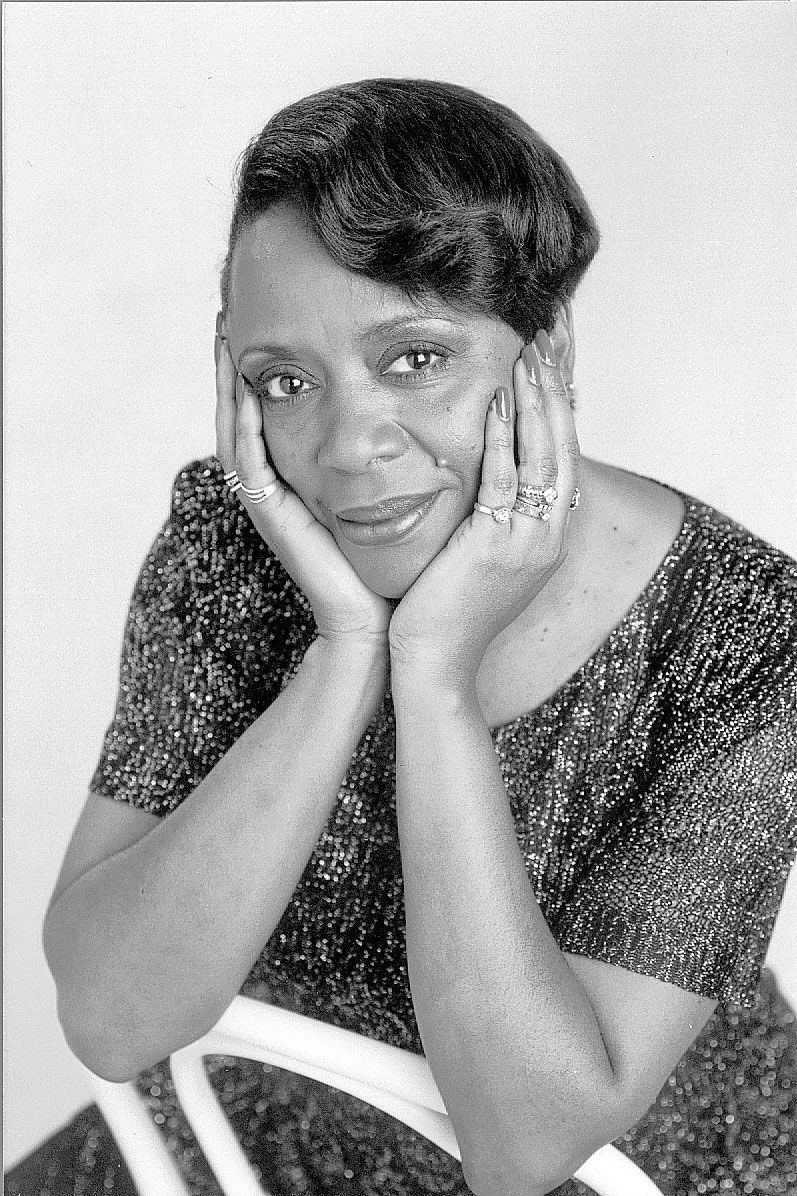 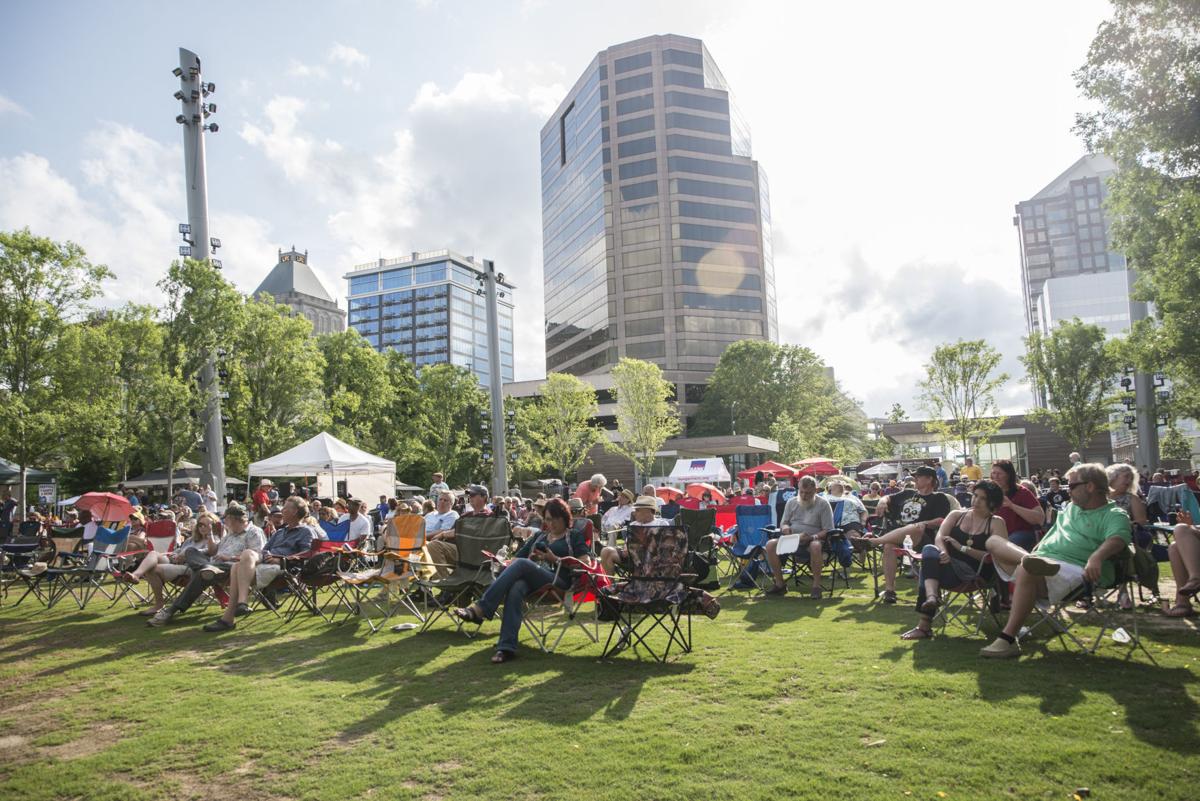 The lawn is full of blues fans at the 32nd annual Carolina Blues Festival at LeBauer Park in Greensboro, N.C., on May 19, 2018.

It ain’t your usual woke-up-this mornin’ blues. Must be something in the air or the water or maybe just in the ear of the beholder that makes it special, setting it apart from its more raucous siblings. Piedmont blues has a glide in its step, a smoothness missing from the rough chop of Delta or Chicago blues.

But what the ear hears is a swoop where there’s usually a whomp. Whether praising Jesus like the Reverend Gary Davis or raising hell truckin’ your blues away with Blind Boy Fuller, the Piedmont style gets you to your destination a little less the worse for wear, rumpled and sweaty but still with a little dignity left. But that’s not to say you can’t get rowdy on the journey, as Brownie and Sonny demonstrated with a passel of whoops and hollers mixed in with their swoops.

“Up till then, acoustic guitar playing, in my mind, was what I’d heard Paul Simon and James Taylor and Jim Croce do,” the guitarist says. “Which is all good picking, too. But when I heard that Jorma Kaukonen stuff, my head kind of turned around. First time I’d ever heard fingerpicking in that style, that kind of ragtime alternating bass fingerstyle of playing. I said, ‘I wan to learn how to do that,’ because it was just so much more bouncy and rhythmic and aggressive.”

But like a lot of young Americans who found out about their own culture through a British invasion, backtracking the invaders influences, Shain found inspiration in Kaukonen’s arrangements.

“I guess you could say Jorma was the gateway drug,” he admits.

Getting to be a fan of Kaukonen’s band Hot Tuna with Jack Casssdy, Shain got exposed to Piedmont blues pioneers such as Blind Boy Fuller and Blind Blake who worked ragtime influences into their fingerpicking.

“That’s where I first heard all that stuff,” Shain said. “Then when I came to college down here at Duke, I was able to go see people like Big Boy Henry and John Dee Holeman playing that stuff right in front of me. And of course, Lightin’ Wells was probably the cleanest picker of that material around here.”

In his late teens, Shain hooked up with WXDU disc jockey Slewfoot and began backing Henry and Holeman. In ‘89, Shain formed his own band, Flyin’ Mice, purveyors of psychedelic bluegrass including covers of Bill Monroe and Ralph Stanley tunes, breaking up that band in ‘96 to form Wake, an electrified outfit.

“It was kind of experimental,” Shain says of the Mice years. “Most of the time there wasn’t a set list, and some of the jams would go on and on. And that’s really why I started Wake and had it be quite different because I got tired of those long jams.”

Wake had more of an alt-country sound that lasted only two years before Shain left to pursue a solo career, which he’s stuck to, more or less, ever since, frequently partnering with bassist F.J. Ventre, with whom he recorded his latest, “Tomorrow Will Be Yesterday Soon,” in Ventre’s Chapel Hill studio.

In January, Shain beat out 200 competitors to take first place in the International Blues Challenge’s Best Solo/Duo challenge in Memphis.

But even though Shain is a student as well as a teacher of Piedmont blues, he admits that he has his own take on it.

“The Delta stuff, for the most part, a lot of the singing happens over a pulsing, one-string bass and very often the singing is right in line with what the melody is doing on the guitar. Whereas, I think on the Piedmont stuff, they tend to sing over kind of a percolating rhythm,” he says. “I’m not exactly a purist, because I often will mix in the slide. I’ll play the slide on the high notes, while I do an alternating thumb on the low notes kind of combining elements of both traditions.”

Shain defends his approach by postulating that even though some of the Piedmont purveyors were actually from the area, several artists who has similar styles were not from around these parts.

“I think it’s mostly folklore people and record companies that have tried to create these divisions because they don’t really leave a lot of room for describing people like Blind Blake,” Shain says. “He certainly sounds like a Piedmont kind of guy, but he was recording in Chicago. And Tampa Red, down in Florida — that’s not in the Piedmont, but they played similarly. Or Mississippi John Hurt. He was in Mississippi, but he was playing a style that was close to what people like Etta Baker were doing.”

But for this outing, Shain, along with former Carolina Chocolate Drop/Sankofa Strings member Dom Flemons, will be honoring the memory of Blind Boy Fuller, to whom the festival is dedicated this year.

Fuller, best known for his 1940 take on “Step It Up and Go,” as well as “Truckin’ My Blues Away” and “Rag, Mama Rag,” was just recently posthumously inducted into the N.C. Music Hall of Fame.

“They couldn’t find any of his heirs, so they contacted us and asked us if we’d accept the award in his honor,” says Piedmont Blues Preservation Society’s Ted Hoffler, a co-chair, with Atiba Berkley, of the 33rd annual Carolina Blues Festival. “We’re going to kind of step back in time and not do any screamin’ guitar players, which I love, but give people a taste of where it all came from, dedicating it to Blind Boy Fuller,” Hoffler says.

In addition to honoring Fuller’s contributions at the festival, Hoffler and the Piedmont Blues Preservation Society also want the public to know what the society does behind the scenes to spread the gospel of Piedmont blues to a wider, younger audience through their Blues in the Schools program.

“Logie Meachum was the king of that. He used to do it for us all the time,” Hoffler says. “We send a couple or three musicians into an elementary school and play blues for them, let the kids interact with the musicians, hands-on with the instruments, tune a guitar to open G and barre across the top and all of a sudden you’re a guitar player.

“We try to tear down any barriers, and keep this genre alive. Also, if we want to be a blues preservation society, we’ve got to have our hands around getting the youth to pay attention.”

To that end, the Piedmont Blues Preservation Society has started an annual youth award to a promising local musician.

“Paying back to the community is what we’re charged with as well,” Hoffler says. “Having a connection with the kids, you never know — the next great musician might be inspired in one of those classes.”

In the meantime, Shain will be on the front lines, smudging the borders a bit, but keeping the Piedmont blues spirit alive and well in his own fashion.

“I’m not a purist, by any means,” Shain says. “So I don’t think anything of taking a blues that I might be going ‘bonk-bonk-bonk-bonk-bonk-bonk-a-donk,’ and I might go ‘donk-doo-da-doo-da-da-dooo’ — put a bluegrass riff into it — doesn’t bother me,” he says, laughing. “I just feel like America’s a hybrid land anyways.”

Tickets: $20 at carolinabluesfestival.com or at the door

Etc: Food trucks will be onsite, as well as crafts artisans with items including jewelry, cigar-box guitars, clothing, weavings and more.

Gwyneth Paltrow cut back on alcohol after battling Covid-19

Singing his own song: Dom Flemons' journey to "Black Cowboys"

Dom Flemons, known as the American Songster, plays old-time music from many traditions on a variety of instruments including banjo, bones, jug…

Leslie Cyriaks and Reggie Campbell dance at the 2018 Carolina Blues Festival at LeBauer Park in Greensboro.

Cowboy Hemphill (left) laughs at 8-month-old Everett Ellington and his mom, Tanya Sheek at the 32nd annual Carolina Blues Festival at LeBauer Park in Greensboro, N.C., on May 19, 2018.

Patsy Swift cheers at the end of a song at the 32nd annual Carolina Blues Festival in 2018. This year’s festival will be May 18-19.

Guitarist Jon Shain beat out 200 competitors to take first place in the International Blues Challenge’s Best Solo/Duo challenge in Memphis. He will perform at the 33rd annual Carolina Blues Festival in downtown Greensboro.

õ Dom Flemons will headline the festival. Also playing will be

À House of Dues of Greensboro and Ã Melva Houston of Mount Airy.

The lawn is full of blues fans at the 32nd annual Carolina Blues Festival at LeBauer Park in Greensboro, N.C., on May 19, 2018.