Steven Spielberg (from left), Rita Moreno and Ariana DeBose arrive March 27 at the Oscars at the Dolby Theatre in Los Angeles.

Actress Rita Moreno holds the Oscar she won at Santa Monica, California on April 9, 1962 as best supporting actress of the year. She won the Academy Award for her role in "West Side Story."

Actress Rita Moreno holds the Emmy statuette she won on Television's 30th annual Emmy Award show in Hollywood, Ca., Sept. 18, 1978. She won outstanding lead actress for a single appearance in a drama or comedy series for "The Rockford Files," "The Paper Palace" episode. 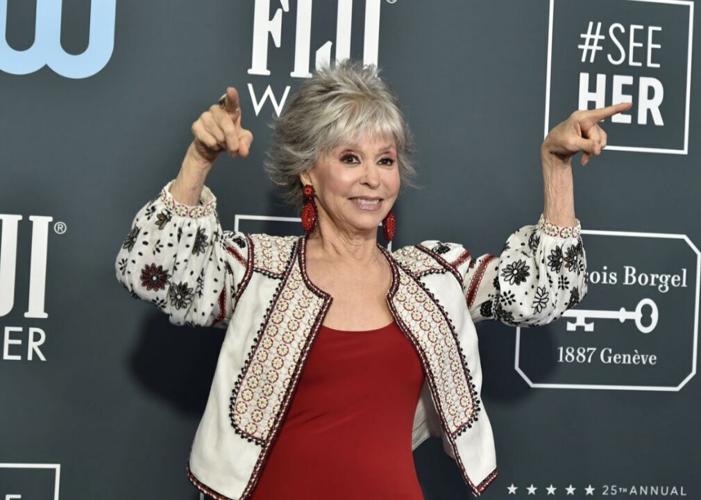 Rita Moreno, 90, is one of the few entertainers to win an Emmy, Grammy, Oscar and Tony. 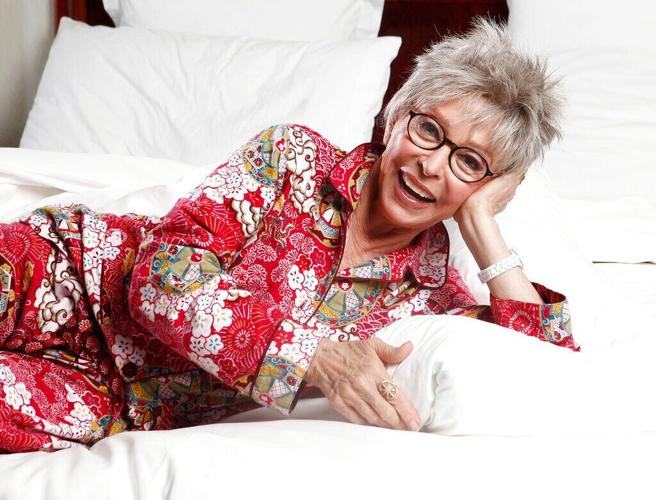 Before Ariana DeBose, Rita Moreno had been the only Latina actress to win an Academy Award.

That happened 60 years ago, when Moreno won for best supporting actress for playing Anita in the first big-screen adaptation of the musical “West Side Story.”

DeBose broke that record on March 27 of this year. The Afro-Latina woman — born in Wilmington and raised in Raleigh — won best supporting actress for the exact same role in Steven Spielberg’s 2021 “West Side Story” remake.

“Now Ariana is taking the mantle,” Moreno said last week from her home in Berkeley, Calif.

Moreno herself appeared in the film as Valentina, a role that Spielberg created just for her.

The 90-year-old actress watched with emotion from the audience as DeBose accepted her Oscar.

“It was just an amazing evening for both of us,” Moreno said.

DeBose paid tribute to “the divine inspiration that is Rita Moreno.”

“I’m so grateful your Anita paved the way for tons of Anitas like me, and I love you so much,” DeBose said.

Moreno expects the Oscar wins for herself and DeBose to come up when she speaks on May 17 at Steven Tanger Center for the Performing Arts.

She will give a short talk and then be interviewed by Molly Sentell Haile of Summerfield, a local educator and prize-winning author.

Conversing from home on this recent Monday morning, Moreno is direct, spirited and “feeling very mischievous,” she admits.

She had just returned from filming the movie, “Eighty for Brady,” with Jane Fonda, Sally Field and Lily Tomlin.

In the comedy/drama, the friends have made it their life-long mission to go to the Super Bowl and meet NFL superstar Tom Brady.

But her Oscar win 60 years ago offered no guarantee that someday, she would act in a film with Fonda, Field and Tomlin.

Born in Puerto Rico, Moreno came to the U.S. with her mother at age 5.

She had her first Broadway role, as “Angelina” in Skydrift, by the age of 13. That caught the attention of Hollywood talent scouts.

She was cast as Anita in the 1961 musical film version of “West Side Story.”

The story is set in the mid-1950s in the Upper West Side of Manhattan in New York City, then a multiracial, blue-collar neighborhood. The musical explores the rivalry between the Jets and the Sharks, two teenage street gangs of different ethnic backgrounds.

Members of the Sharks, from Puerto Rico, are taunted by the Jets, a white gang. The young protagonist, Tony, a former member of the Jets, falls in love with Maria, the sister of Bernardo, the leader of the Sharks. Anita is Bernardo’s girlfriend.

Both Bernardo and Tony end up dead.

Even after winning the Oscar, meaningful roles weren’t easy to come by. She was offered stereotypical roles for Latinas.

“After I won the Oscar and the Golden Globe, I didn’t do a movie for years,” she said. “I was offered some things, but they were all lesser products. Lesser versions, that is, of gang movies ... ‘West Side Story’ came and went, and that was that.”

She eventually remade a career with credits in stage and television acting.

It brought her a Grammy, Emmy and Tony Award and a slew of other honors. She is one of a few performers who have won the four major annual American entertainment awards — often referred to as an EGOT.

“It helps to give them the belief that they are better than they think they are,” she said. “I am all for people appreciating themselves. And it’s very difficult for a lot of people, particularly people of color to feel that way. I am one happy Puerto Rican.”

“We are so under-represented,” Moreno said. “I am just ill to think of how we have struggled and still don’t really get the kind of recognition and acknowledgement that we have earned. It’s still not happening for our community, and frankly, I’m puzzled and annoyed and irritated by it.”

She called Spielberg’s decision to cast DeBose as Anita in the 2021 film “so on the money, so right.”

“We in Puerto Rico are every kind of color you can imagine,” Moreno said. “We are many nationalities ... In my own family, I had an aunt who was quite coppery skinned. And then there was me, who was fairer because my grandma was a Spaniard from Spain.”

For the 2021 remake of “West Side Story,” Moreno had known since their rehearsals that DeBose would win an Oscar. The scene in the candy store, where Anita is roughed up and almost raped by the Jets, clinched it.

“I said to myself, ‘This girl is going to win an Oscar for this part,’” Moreno said. “It’s an Oscar part, also. And I don’t want to take anything away from her, but it’s that kind of part.”

“And I realized many years later, after I won the Oscar, that what got me that Oscar was that scene in the candy store where she is almost raped,” Moreno said. “That’s an Oscar-winning kind of scene. Think of that scene, how fraught it is with emotion. It gives the actress a really fabulous opportunity to let go. Ariana did it, I did it, and I think every young actress who has ever played that role has to feel very good about herself.”

Moreno said she was particularly moved that DeBose’s Oscar acceptance speech included a line from the “West Side Story” song, “Somewhere.”

“So to anybody who has ever questioned your identity — ever, ever, ever — or you find yourself living in the gray spaces, I promise you this: There is indeed a place for us,” DeBose said.

Moreno doesn’t expect DeBose’s struggle to be as difficult as her own in those early years.

“It will never be easy because she is a person of color,” Moreno said. “But she has been accepted in a way that I never, never, never was accepted.”

Just last week, DeBose was named the host of Broadway’s Tony Awards on June 12 from Radio City Music Hall, to be broadcast live on CBS.

For herself, Moreno said that she is particularly pleased that she continues to be recognized.

What: Actress Rita Moreno to speak as part of Guilford College's Bryan Series

Tickets: $51-$71 at ticketmaster.com or at Tanger Center box office from noon-5 p.m. Tuesday-Saturday

Etc.: All Bryan Series event attendees must provide proof of vaccination against COVID-19 or a negative test within 72 hours before each event. Masks are required.

Looking for something good to read over lunch today? Find out how a young woman, abandoned as a baby, is approaching her future after graduati…

Fashion and style at the 2022 ‘Billboard’ Music Awards

Fashion and style at the 2022 ‘Billboard’ Music Awards

Steven Spielberg (from left), Rita Moreno and Ariana DeBose arrive March 27 at the Oscars at the Dolby Theatre in Los Angeles.

Actress Rita Moreno holds the Oscar she won at Santa Monica, California on April 9, 1962 as best supporting actress of the year. She won the Academy Award for her role in "West Side Story."

Actress Rita Moreno holds the Emmy statuette she won on Television's 30th annual Emmy Award show in Hollywood, Ca., Sept. 18, 1978. She won outstanding lead actress for a single appearance in a drama or comedy series for "The Rockford Files," "The Paper Palace" episode.

Rita Moreno, 90, is one of the few entertainers to win an Emmy, Grammy, Oscar and Tony. 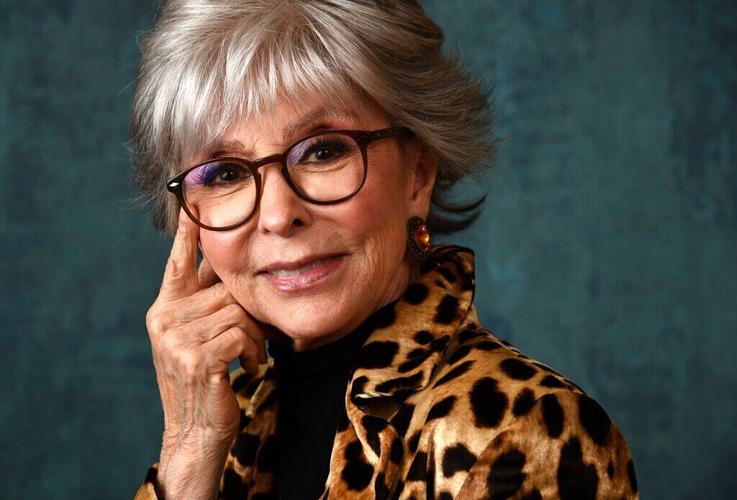 Rita Moreno will speak at Tanger Center in Greensboro as part of the Guilford College’s Bryan Series.

Rita Moreno as Valentina (left) and Ansel Elgort as Tony in Steven Spielberg’s “West Side Story.” Moreno stared in the original 1961 film version.