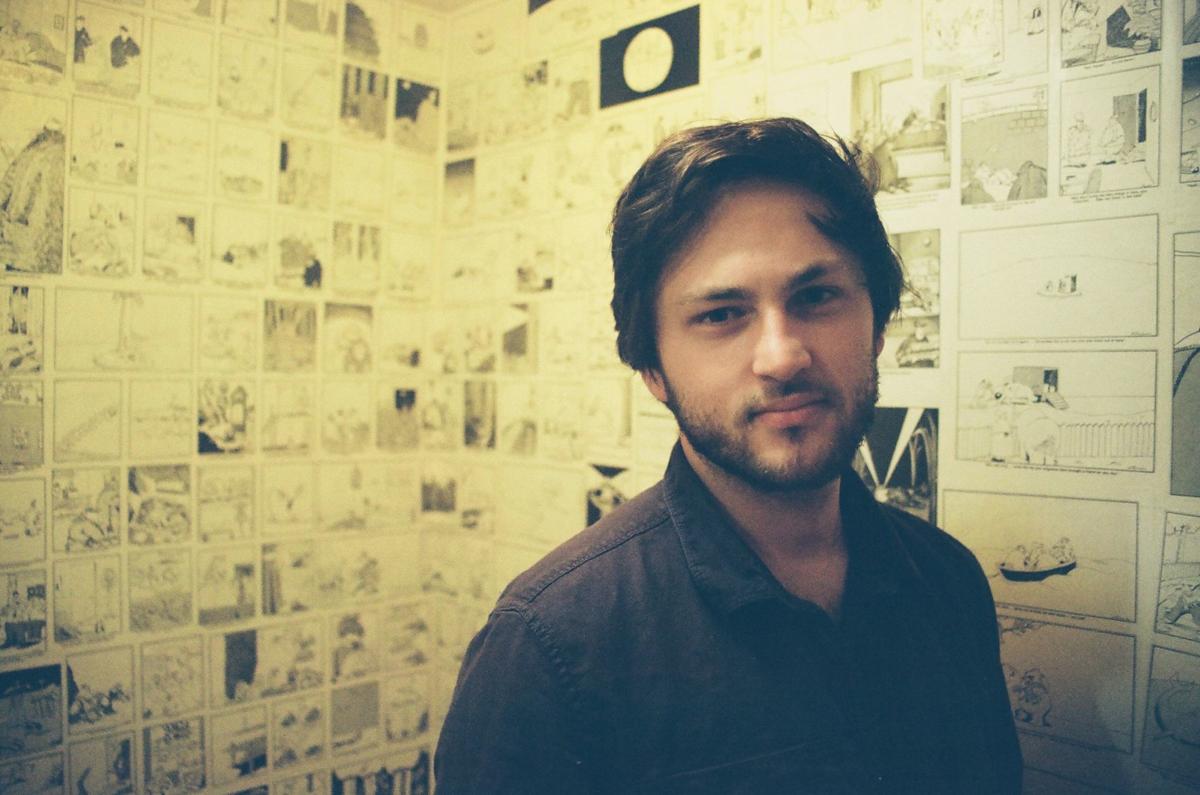 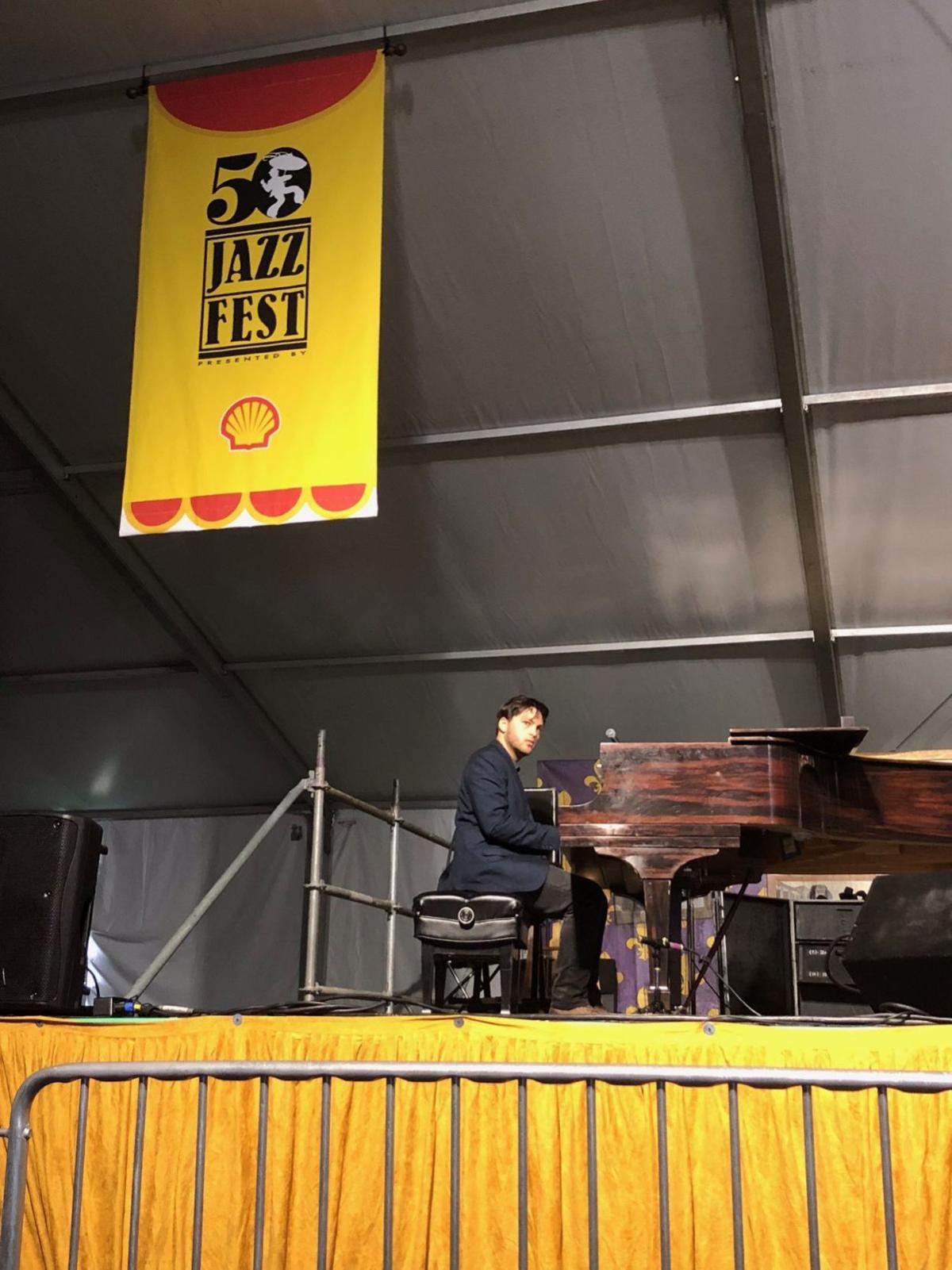 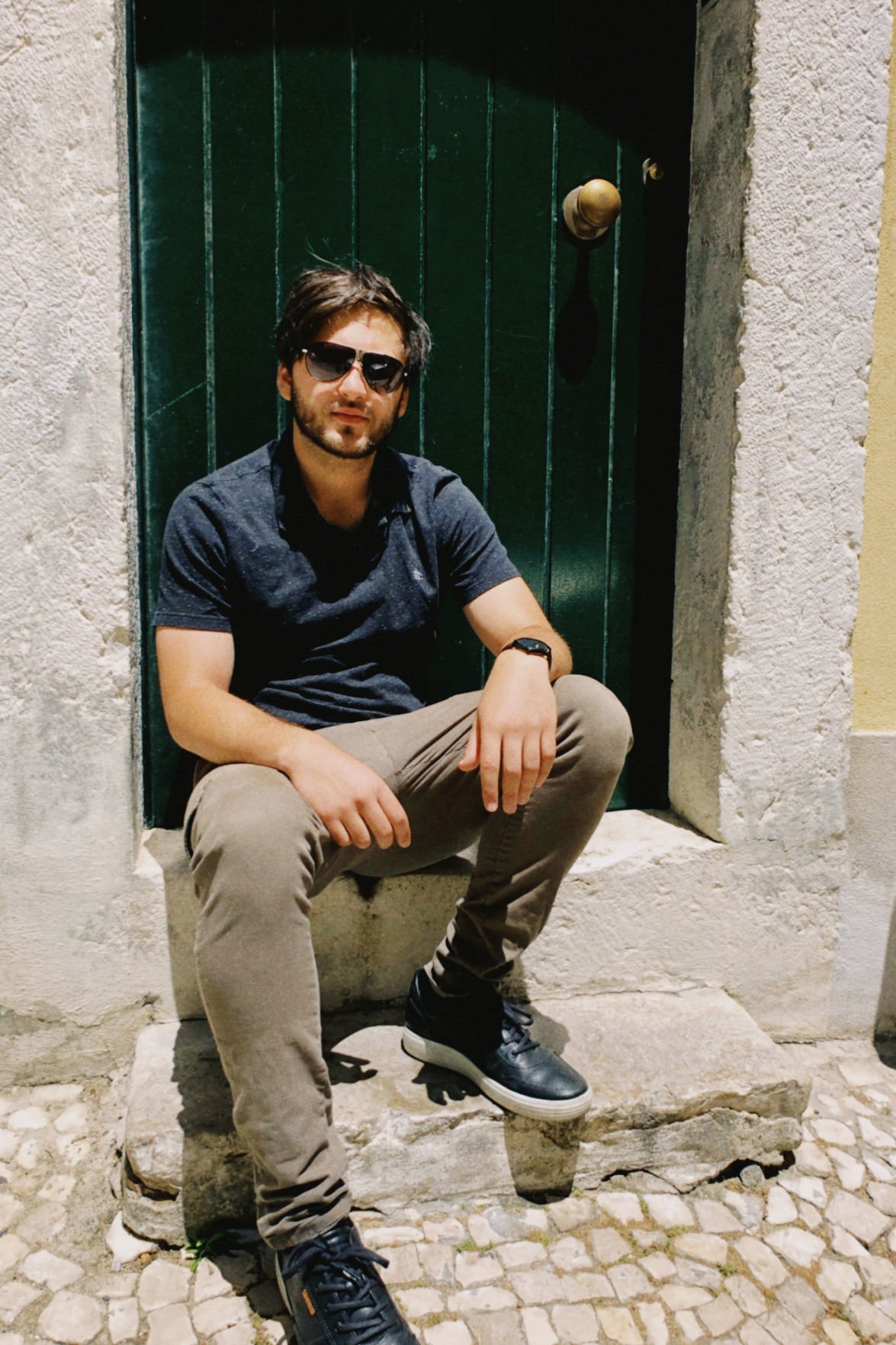 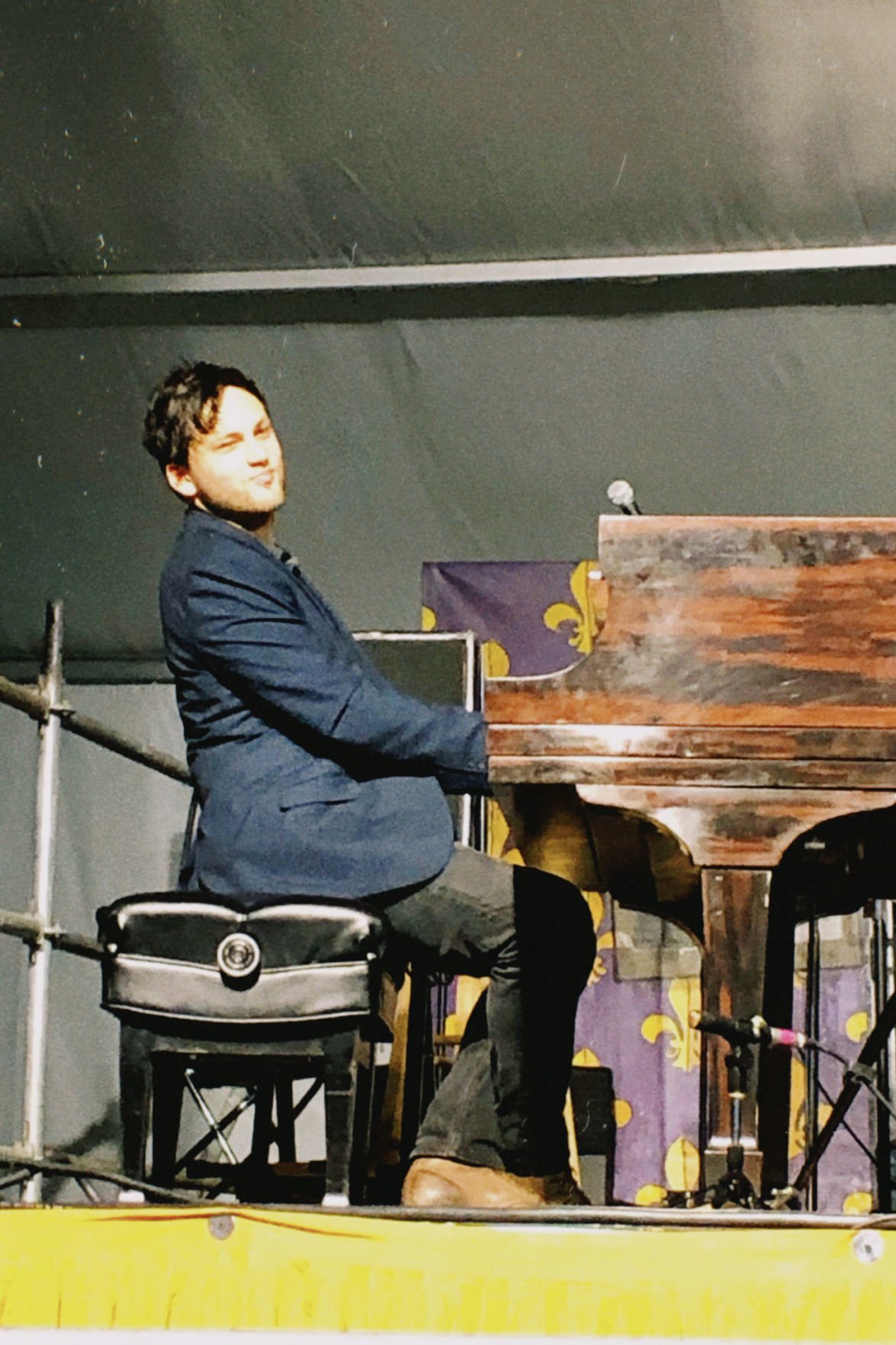 At age 10, most kids are a bit fuzzy about career choices. But at that age, Sam Fribush was already working toward a musical career in New Orleans.

Son of Paul “Doc” Fribush, guitarist and clarinetist for the Swamp Cats, Swamp Nots and Sinai Mountain Ramblers, Sam and his neighbor Gray Johnson started playing in the street in front of the Fribush’s house. A neighbor saw them and hired them to play at Friendly Park Pool on Labor Day in 2003. A neighbor also helped name the band by bringing over a couple of yard flamingos and installing them in front of the band. The Pink Flamingos used an unusual setup,with Johnston on a standard drum kit and Fribush on piano and steel pan. Soon afterward, Gabe Morgan, son of Piedmont Songbag’s impresario Don Morgan, joined on bass.

Despite their ages, their initial foray into music got them an up-close-and-personal encounter with the business end early on. “We actually got a cease and desist letter, so we became the Hot Pink Flamingos. It was some group in Arizona, some national band. They were mad that we were the Pink Flamingos,” Fribush says, chuckling at the memory. “We were like 10 years old.”

The Hot Pink Flamingos added their own twists to the song fodder, adapting Led Zeppelin’s “D’yer Mak’er” to a loping Calypso beat. The Knack’s “My Sharona” got relocated to the West Indies for a beat makeover.

Fribush gives big props to Frazier for the beginnings of his musical education.

“I attribute a lot to Sam. I think about Sam all the time. He would come over here and have dinner, he’d bring his guitar and he would just teach me tunes by ear, show me some piano stuff,” Fribush says “It was a lot of New Orleans piano, a lot of The Band, Allen Toussaint, Van Morrison, classic rock, just a great repertoire, a Sam Frazier repertoire. Sometimes we’d play his original tunes.”

Fribush took that curriculum to school with him.

“I would say my musical education really started with Sam and Tracy and then transitioned to Weaver,” he says today by phone from his parent’s Greensboro home, where he is riding out the career-hiatus-producing effects of the novel coronavirus.

While attending Weaver Academy, he and his sax-playing brother, Eli, would go over to Greensboro College and study and play with Neil Clegg, Eli’s mentor, and Dave Fox. That led to other musical benefits as well. “We were both in the Benjy Springs Big Band at Greensboro College while we were in high school,” Fribush says. He also was the president of the jazz club at Weaver. He credits teacher Mark Freundt for helping him get a lot of his technique and classical chops together even though he was interested in other things.

“If I hadn’t have had that training in high school,” he says, “I probably wouldn’t have been able to get into the conservatory.”

That would be the New England Conservatory of Music in Boston, where Fribush graduated in 2017. He describes it as a “very prestigious classical-oriented type of school,” where he studied contemporary improvisation with a focus in jazz piano.

He dove into some post-grad work to get some practical experience not taught in school:

“I finished school, got a job working at Mt. Moriah, an African American Baptist church 30 minutes south of Boston in Brockton, Mass. Played the B-3 (organ) there for about a year from summer of 2017 right out of college till I moved to New Orleans in the fall of 2018.”

He was no novice to New Orleans musical culture, baptizing himself at an early age.

“I’ve been going to New Orleans since I was about 10 years old,” Fribush says. “It’s always been home away from home. I just love it down there.”

He got to sit in with Walter “Wolfman” Washington at the music club d.b.a. the first time he went to New Orleans at age 10. At a tender age, he was allowed onstage to play with Big Sam’s Funky Nation at Tipitina’s and with Charmaine Neville at Snug Harbor.

He also got stage time when The Dirty Dozen Brass Band played at the Blind Tiger in Greensboro several years back and when Anders Osborne visited Greensboro’s Empire Ballroom in 2010 as part of the EMF Fringe Festival.

Fribush had parlayed all of those experiences and contacts into a working musician’s life in New Orleans.

“Currently, I’m in Greensboro,” he says. “But I have been going heavy in New Orleans. I’ve been living there and playing all over town, all the local spots, doing really well there and was supposed to go on a big tour this year before corona.” Pokey LaFarge was supposed to be his ticket out of town this summer for a world-wide tour supporting LaFarge’s latest album, “Rock Bottom Rhapsody,” out in April on New West records.

“We were supposed to tour the world,” Fribush says. “We were going to Berlin, Paris and Amsterdam, Antwerp and London, and a big tour supposed to happen in all of June from the West Coast all through the Midwest through New England, and all of that’s canceled.”

So for now, Greensboro is Fribush headquarters.

“I got out of my rent situation in New Orleans for the summer, and me and Eli, my brother, we drove up here from New Orleans, and we’ve been crashing at my parents’ house. We got a studio next to my mom; my mom’s working in her studio, and we’re right next door so it’s not bad.”

The two have used the time to cook up some music together. Brother Eli, a saxophonist-bassist, engineer and producer, has set up an in-home studio, working with a lot of local emcees and vocalists.

“We’re working a new kind of mix-tape album right now, which is going to feature some steel drum and some banjo and fiddle, and I got an organ in the garage. ... We’ve just been making as much music as we can,” Fribush says.

But he pines for New Orleans: “Things were really going great in New Orleans. I was sitting in at Pres Hall. I had weekly gigs on Frenchman Street at the Spotted Cat, and Kermit Ruffins’ Treme Mother-in-Law Lounge.” He played at Jazz Fest in 2019 — with a jazz band one nightand also in the gospel tent with the Watson Memorial Church where he was an organist.

Last year he toured Ireland, England and Scotland for three weeks with the New Orleans jazz band Swamp Donkeys and has been on Donna the Buffalo’s roster over the years as a sub for their keyboardist David McCracken.

But all the major festivals, including Jazz Fest, have been canceled this year and all the venues are closed because of the COVID-19 pandemic. Even in normal times, New Orleans has a seasonal musical economy. Most of the city’s local players try to book out-of-town gigs to avoid the sweltering summer months.

“I’m probably just going to wait this out,” Fribush says. “I don’t want to find an apartment and sign a lease till I know that there’s a gig. I’m lucky that I have something to fall back on, and I do love Greensboro. It’s nice and easy, and it’s good to be home and focus on myself and my music right now. But I’m hoping that six months from now, I’ll be out on the road with Pokey, and we’ll just pick up where we left off.”

"Running a mile each morning has been curtailed by COVID, so I am working on getting The Pet Set re-released, and feeding the two ducks who come to visit me every day."

Canceled TV shows 2021: Which of your favorite series are coming to an end?

A roundup of all of the shows that are coming to an end this year.

Dustin Diamond of 'Saved by the Bell' hospitalized with cancer

Dustin Diamond, who played Screech on the popular 1990s high school comedy "Saved by the Bell," is hospitalized with cancer, his manager said.

See the list of entertainers who will perform at the Biden-Harris inauguration on Jan. 20.