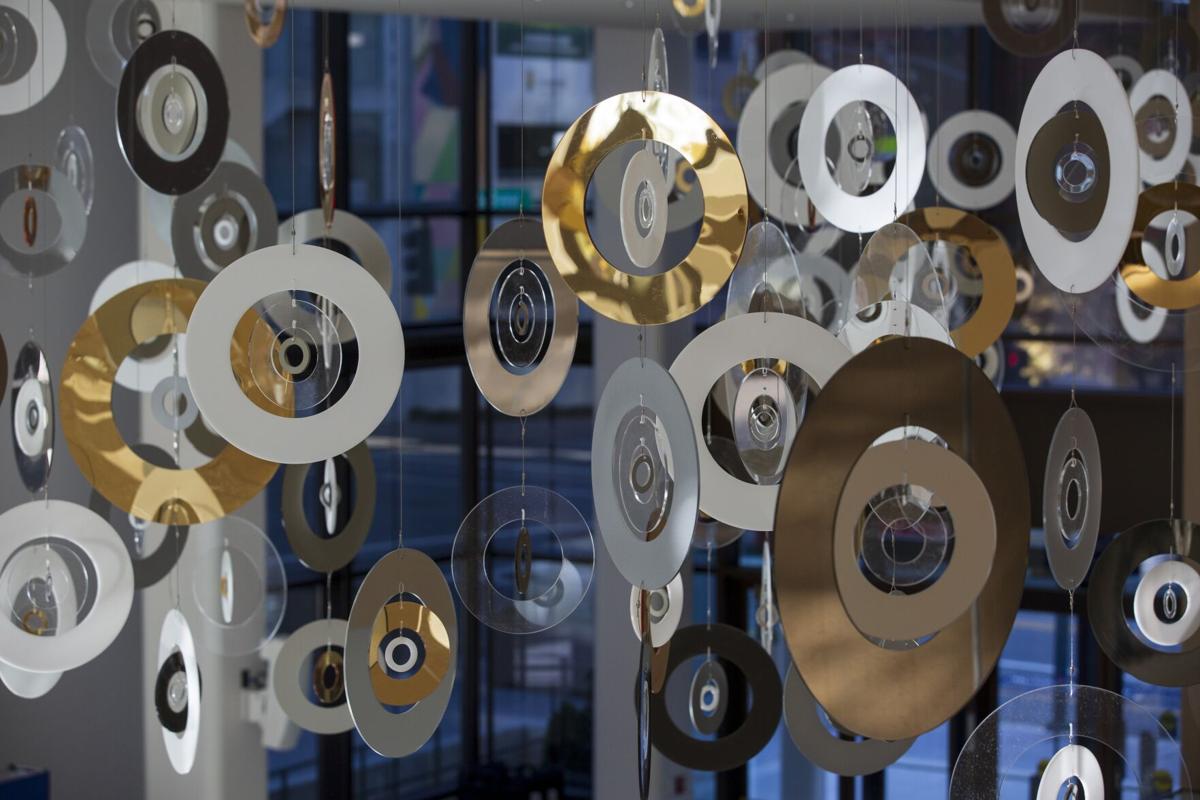 Artwork hangs from the ceiling in the lobby of the Steven Tanger Center for the Performing Arts in Greensboro on Monday. 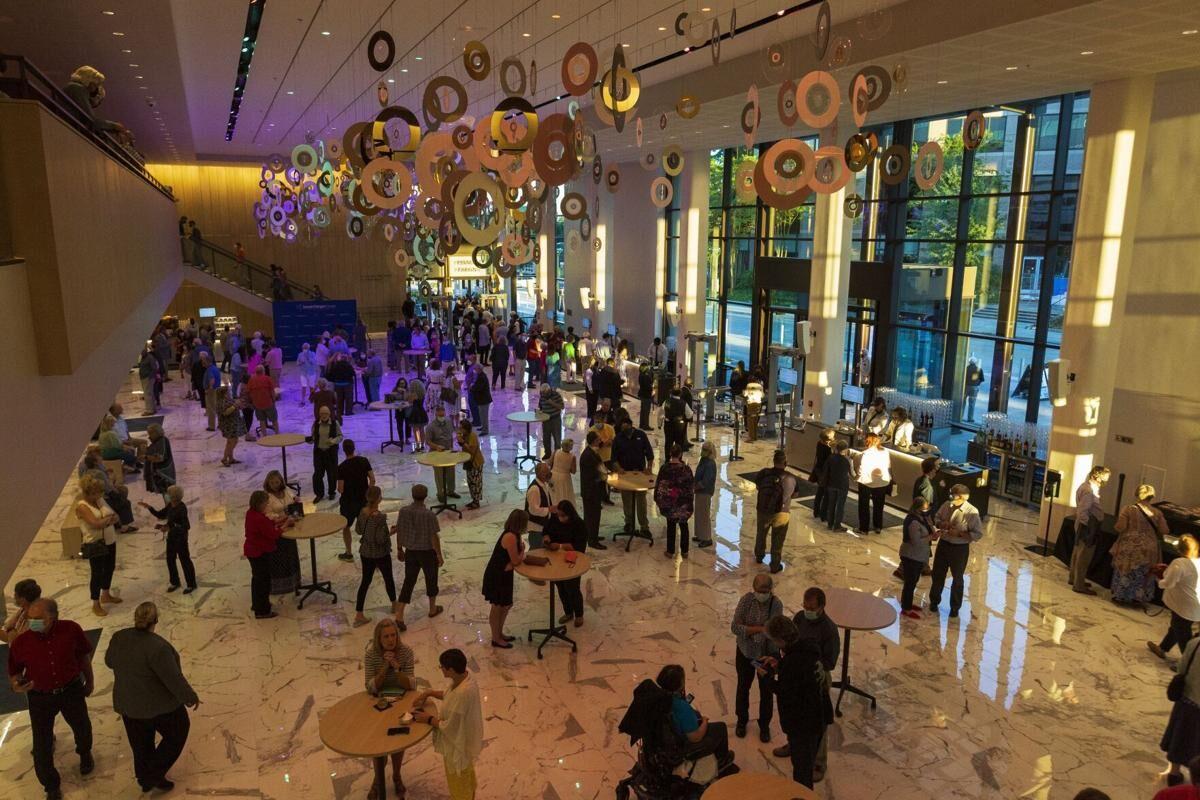 Concertgoers mingle below the hanging sculpture in the Phillips Hall lobby of the Steven Tanger Center for the Performing Arts on opening night on Sept. 2. 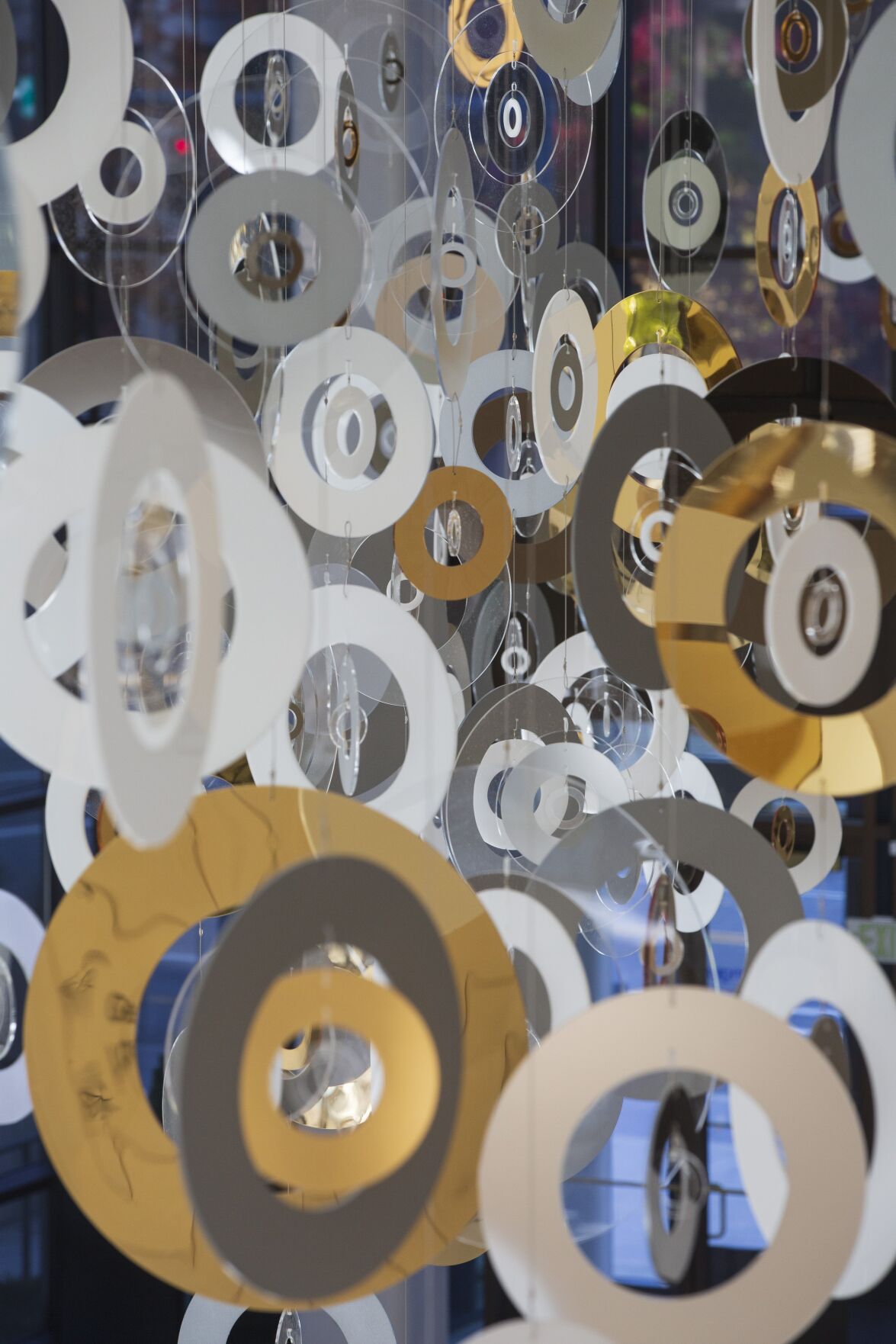 "Genesis" by Mabel Poblet hangs in the Phillips Hall lobby of the Steven Tanger Center for the Performing Arts in Greensboro on Monday. It consists of nearly 200 strands of laser-cut, reflective metallic and clear acrylic discs. 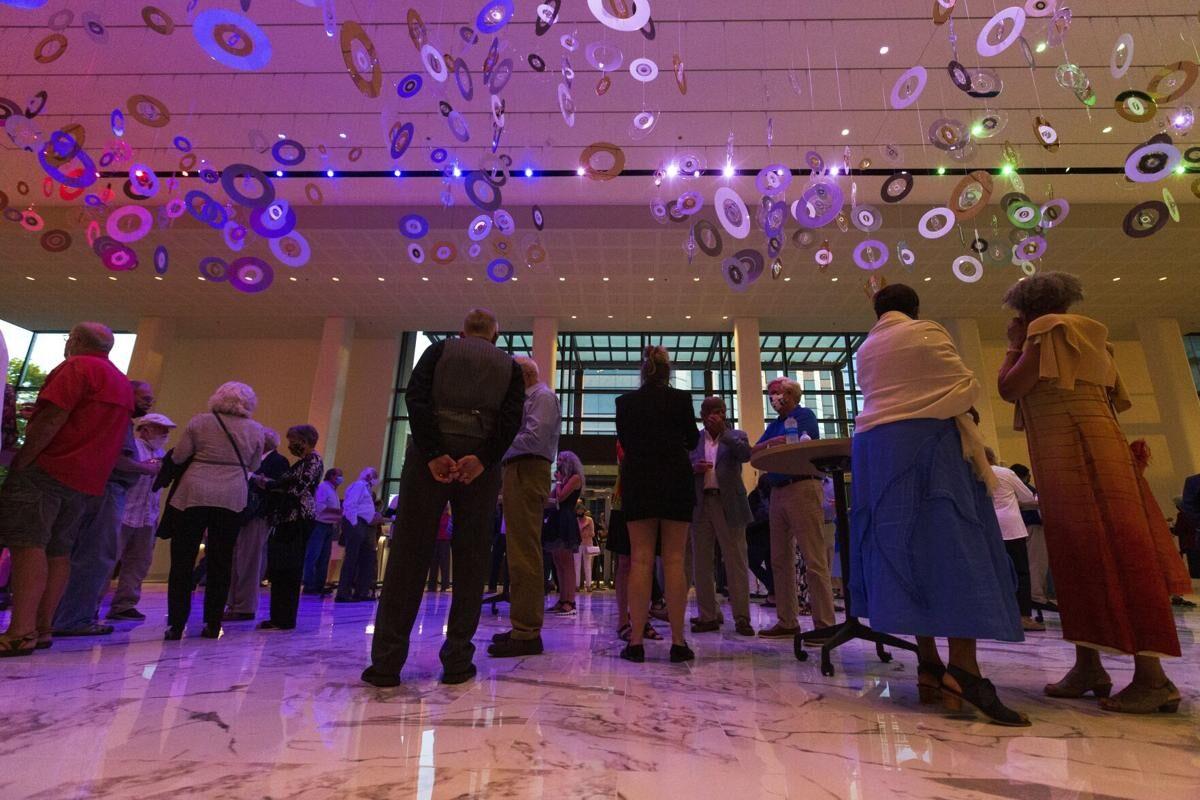 People gather beneath the hanging sculpture in the lobby of the Steven Tanger Center for the Performing Arts on its opening night in September.

GREENSBORO — Phillips Foundation set a goal when it sought a major artwork for the Steven Tanger Center for the Performing Arts.

So the locally-based family foundation financed the creation and installation of “Genesis” by Mabel (pronounced Ma-bell’) Poblet. She’s considered one of Cuba’s most outstanding emerging artists.

The disks range in scale from 6 inches to 24 inches in diameter.

They hang from the ceiling of the 8,000-square-foot, two-story lobby — called Phillips Hall — of the new downtown Tanger Center.

The foundation chose an emerging, female Latin American artist to reflect the international and global cultures represented in the city and region.

“We feel that this art installation is literally reflective of the diversity that we cherish here in Greensboro,” Phillips said.

She, foundation officials Kevin Phillips and Keith Phillips, and other donors to Tanger Center construction gathered in its lobby Monday night to officially mark its opening — and their role in it.

Tanger Center and city officials thanked them for making the 3,023-seat venue a reality.

Private contributors gave more than $43 million to the $93 million public-private partnership. But the COVID-19 pandemic postponed celebratory opening events from March 2020 until this week.

Elizabeth Phillips talked Monday about the lobby art piece, and invited the community to celebrate it, too.

The Tanger Center has hosted several shows since its Sept. 2 opening. Many visitors have seen its lobby art already.

Everyone can see it Thursday, during a public open house.

Phillips Foundation, endowed by the estate of real estate developer Kermit F. Phillips II, has given millions of dollars to educational, health and anti-poverty programs in the city.

It gave $5 million to Tanger Center construction, making it one of the largest, private investors for the project.

Of that, it earmarked $500,000 for art installation, Elizabeth Phillips said.

Jeannette Smith Phillips, born and raised in Cuba, was the wife of Kermit Phillips. Edith Lopez Phillips is the mother of Kevin Phillips and Katherine Phillips; her family came from Mexican heritage.

The foundation sought an emerging female artist from Latin America who could honor and amplify their culture.

The lobby art installation takes up 74 feet by 30 feet of ceiling space and 12 feet from top to bottom.

Each strand was individually designed by Poblet.

A sophisticated, dynamic lighting system surrounds the perimeter of the artwork.

Lights can change colors with the current production. During the recent Broadway touring show, “Wicked,” they cast a green light on the reflective disks.

New York art consultant Cynthia Reeves led the foundation’s search for the artist. They sought an artist’s studio with the capacity to execute such a large piece, Phillips said.

They found that artist in Poblet of Havana.

It’s the first art piece of its kind commissioned out of Havana since the 2015 brief opening of full U.S. diplomatic relations with Cuba, Phillips said.

“Genesis is a reflection of the impressions of my home country, of Cuba,” Poblet said before the original scheduled opening of the Tanger Center.

“We are an island nation, surrounded by water, where the light is constantly moving and reflecting off the surface of the waves — ever changing, ever interesting,” Poblet said. “That is what I wished to evoke through ‘Genesis’ — this sense of ever-changing light.”

Because of the difficulties of obtaining a travel visa and the complications of the pandemic, Poblet has been unable to travel to North Carolina.

So Poblet created the installation plans, and a team here executed plans to install it, Phillips said. Most of the lighting features have been completed.

When she can travel here, Poblet will install finishing touches herself, Phillips said.

“We hope that the community is as proud of this historic art installation as we are, and that they find it also reflective of the diversity in our community,” Phillips said.

“We feel that art is something that can unite us and reflect shared values and create excitement,” she said. “We hope that whenever people walk into the Tanger Center, into Phillips Hall, that they have a moment of inspiration and awe because of the beauty of this chandelier art piece.”

Artwork hangs from the ceiling in the lobby of the Steven Tanger Center for the Performing Arts in Greensboro on Monday.

Concertgoers mingle below the hanging sculpture in the Phillips Hall lobby of the Steven Tanger Center for the Performing Arts on opening night on Sept. 2.

"Genesis" by Mabel Poblet hangs in the Phillips Hall lobby of the Steven Tanger Center for the Performing Arts in Greensboro on Monday. It consists of nearly 200 strands of laser-cut, reflective metallic and clear acrylic discs.

People gather beneath the hanging sculpture in the lobby of the Steven Tanger Center for the Performing Arts on its opening night in September.