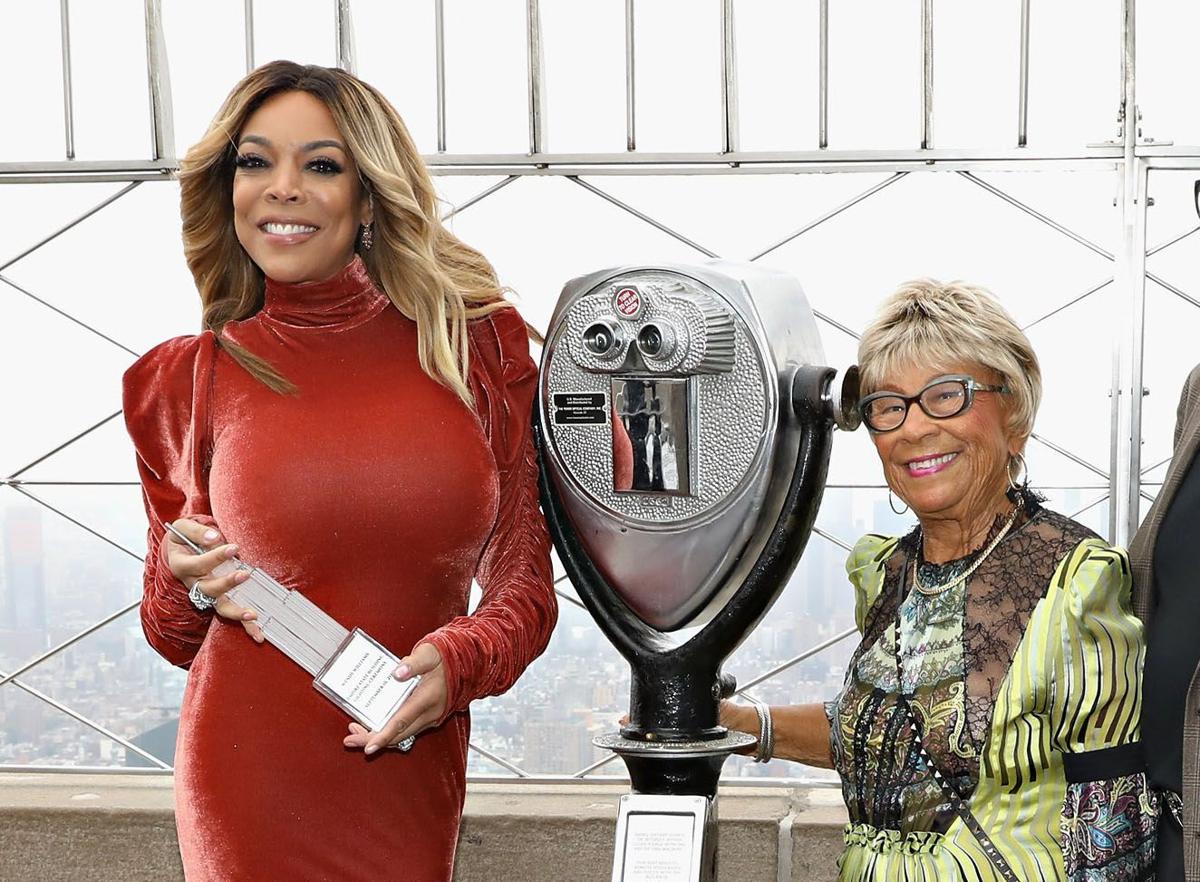 Wendy Williams and and her mom, Shirley Williams, on the observation deck of the Empire State Building. Wendy Williams’ show was supposed to return in September but delayed because of some health problems.

A letter came in while Matt Amodio was rolling on “Jeopardy!” — to a viewer’s dismay.

Q: Apparently “Jeopardy!” feels that a long-running contestant increases viewership. However, myself and a number of my friends have stopped watching. It is now boring, and I really feel sorry for all those people who waited months or years to be a contestant only to know they haven’t got a chance.

How about setting a number of appearances instead of letting a person go on and on and on? Two or three weeks should certainly be enough to amass a lot of money.

Answer: As you now know, Matt Amodio’s streak ended after 38 matches and more than $1.5 million in winnings. As devastating as it could be for some of his competitors, Amodio’s run had this occasional viewer tuning in more often, if only to see if he could be beaten.

And his run was still shorter than that by Ken Jennings, who won 74 straight games in 2004. The show used to limit how many days a contestant could win — to just five — and, even before Amodio, some fans have called for a return of a limit. But it hardly seems fair to strong contestants to usher them out when they have a chance to keep winning.

Q: I saw a list recently of the best songs in James Bond movies and there was no mention of the best Bond song ever, “We Have All the Time in the World”! I forgot the name of the movie, but I’m pretty sure that Bond gets married in the movie, his wife gets killed and his last words to her are “We had all the time in the world.” Please tell me the name of that Bond movie.

Answer: That is in “On Her Majesty’s Secret Service,” the lone Bond film to star George Lazenby as 007 (with Diana Rigg as his doomed wife). At the end, holding his dead bride, Bond tells an inquiring officer, “It’s quite all right, really. She’s having a rest. … There’s no hurry, you see. We have all the time in the world.”

Both the film and the song, performed by Louis Armstrong, have resonated with many Bond fans. “We Have All the Time in the World” comes up in the latest Bond, “No Time to Die,” which is also Daniel Craig’s last appearance as Bond — and has Craig saying, “We have all the time in the world.” As film historian Jon Burlingame wrote in Variety, “The melody is heard in Hans Zimmer’s ‘No Time to Die’ underscore right after Craig says the line in the pre-credits sequence. It returns in another, moving scene, near the end of the film — and the full, original Armstrong vocal then plays under the film’s end credits.”

Q: Why is “The Wendy Williams Show” running reruns? When she left for vacation in July, she said they would be back the first of September.

Answer: Williams has faced a series of health problems that have kept her off the air. In September the show announced on Instagram that Williams had a breakthrough case of COVID-19 and the show was postponed until Oct. 4. Then it said that Williams “has been and continues to be under a doctor’s care and is still not ready to return to work,” pushing the return to Oct. 18. Most recently, the show said there will be new episodes beginning Oct. 18, but “with an exciting lineup of guest hosts and panels.” Williams, it said, “is making progress but is experiencing serious complications as a direct result of Graves’ disease and her thyroid condition. … More time is needed before she is able to return to her live hosting duties. … As soon as she’s ready, she will be back in her treasured purple chair.”

Q: Some weeks ago, I watched on TV a movie starring Johnny Depp as a terminally ill college professor. If it’s available, I would like to purchase the DVD, but I can’t recall the title of the film. Can you help?Q: I’ve noticed that since “Law & Order: Organized Crime” came on, the voice that states the introduction sounds the same as the one in the long running “Law & Order: SVU.” I’m curious whether it’s the same man introducing it or is it someone they found who sounds just like the original voice? Or could it be computerized?

Answer: Actor Steven Zirnkilton is the voice on both those shows; in fact, he has been the narrative voice for the various “Law & Order” series since the original in 1990. With a resume including radio, TV news and politics as well as commercials and other voice work, he once told the University of Maine’s student newspaper that he first worked on the “Law & Order” pilot as an actor. “I played an on-camera detective in the pilot episode, and then I got a call from a big-time producer who said he had something he wanted me to record. I had no idea what it would be, and he stood next to me as it was read, and he told me how he wanted it done. And that was that,” he said.

Lily Collins pushing for third season of 'Emily in Paris'

Lily Collins pushing for third season of 'Emily in Paris'

Aaron Carter back with fiancée a week after public split

Aaron Carter back with fiancée a week after public split

Shatner in space. "Jeopardy!" host drama. The Rittenhouse verdict. Here are the top 10 most notable moments that played out on TV in 2021.

The national tour of the Broadway musical, "Dear Evan Hansen," will relaunch on Dec. 7 at Greensboro's Steven Tanger Center for the Performing Arts.

Fourteen-time Grammy Award winner Emmylou Harris, Greensky Bluegrass and Rissi Palmer are among the first round of artists announced for Merlefest, to be held from April 28 to May 1 on the campus of Wilkes Community College.

During required testing ahead of the concerts, some chorus members tested positive for COVID-19, although none are showing symptoms of the illness, Triad Pride said in an email and online post. "Out of safety to our members and our audience we can no longer continue with our concerts," the group said.

From the Netflix release "The Lost Daughter" to the blockbuster "Dune," here are the Associated Press film writers' picks for the best movies of 2021.

New holiday music: The big names, the best and who didn't make the cut

Television host and actor Nick Cannon shared with his talk show audience on Tuesday that his youngest child, Zen, has died.

Comedian, actor, singer and writer Rodney Carrington will bring his "Let Me In!" tour on March 24 to Greensboro's Steven Tanger Center for the Performing Arts.

Wendy Williams and and her mom, Shirley Williams, on the observation deck of the Empire State Building. Wendy Williams’ show was supposed to return in September but delayed because of some health problems.