Tony Dokoupil (from left), Gayle King and Anthony Mason were the hosts of the CBS morning show. Now, the show has been “reimagined” with Nate Burleson replacing Anthony Mason. 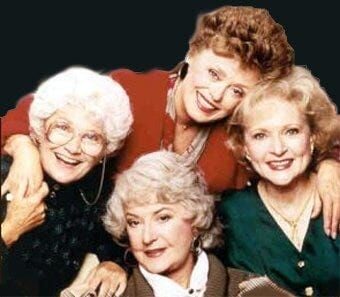 "The Golden Girls" were (clockwise from left) Estelle Getty as Sophia, Rue McClanahan as Blanche, Betty White as Rose and Bea Arthur as Dorothy.

Q: Where is Anthony Mason on the CBS morning show? Was he let go? What can we do to get him back?

Answer: A couple of weeks ago, CBS unveiled a “reimagined” weekday program, calling it “CBS Mornings” and having Gayle King, Tony Dokoupil and new addition Nate Burleson as the hosts. In that shuffle, Anthony Mason was assigned to contribute arts and culture pieces to the program.

CBS says the new format aims to make viewers “more informed, more prepared and more uplifted as they start their day,” in part by embracing aspects of “CBS Sunday Morning,” still anchored by Jane Pauley. (“CBS Saturday Morning” continues with Jeff Glor, Dana Jacobson and Michelle Miller.) The network said that “impactful journalism and rich storytelling will tie its morning franchises ... together across the week. The three morning broadcasts will share a similar look and editorial breadth.”

Q: I have been watching reruns of “The Golden Girls” on the Hallmark Channel for ages. The episode where Dorothy marries Lucas and says goodbye to the girls — what happens after that? The show starts again with the four women together. Did they stop filming?

Answer: Yes. The 1992 episode with Dorothy’s wedding is the “Golden GIrls” series finale. Bea Arthur, who played Dorothy, had decided to leave the show, so it ended its long NBC run. CBS then tried to continue with the other “girls” (Betty White, Rue McClanahan and Estelle Getty) in a sequel series, “The Golden Palace,” but it was not a success and ended after a single season.

Q: I was so excited to watch “Dancing with the Stars,” but then I remembered who the host was. She makes the show about her with the low-cut dresses and the way she walks. This show is about dancing and not about her. She needs to tone it down. Better yet, bring back Tom Bergeron.

Answer: As this indicates, a new season of “DWTS” has begun and that means there’s a fresh round of complaints about Tyra Banks as host. (You may remember several columns of readers’ observations about Banks last year.) Banks is still not my idea of a good host, and not remotely someone to get me back to a show that lost my interest long before her arrival. But the show has long been about personalities as much or more as dancing — and Banks’s presence does stir people up.

Q: I recently enjoyed the series “Daredevil” on Netflix. I was wondering if any more will be made. Also, could you give me any information about the star, Charlie Cox?

Answer: Netflix ended “Daredevil” in 2018 as it was purging several series that featured characters from Marvel Comics. There have been hopes since then that “Daredevil” will return on Disney+, where Disney has placed several other of its Marvel properties, and even speculation that Cox will resume the role in one of the upcoming Marvel movies. “I don’t know what’s going to happen,” Cox told Forbes.com. “I genuinely don’t know.” As for Cox when he’s not playing a blind crimefighter, he’s an English actor whose other credits include the movie “The Theory of Everything” and the TV series “Boardwalk Empire.” Most recently he has starred on the crime drama “Kin,” currently airing on AMC+. (Please note that + indicating a streaming service, not a cable channel.)

Q: We had been watching “Virgin River” on Netflix up to Season 3, Episode 10, and it appears to be the end, but there is no concluding episode. Will it continue?

Answer: Yes. Netflix recently announced that it has ordered fourth and fifth seasons of the drama, reportedly for a total of 20 more episodes based on the books by Robyn Carr. The new episodes should start arriving in 2022.

Tony Dokoupil (from left), Gayle King and Anthony Mason were the hosts of the CBS morning show. Now, the show has been “reimagined” with Nate Burleson replacing Anthony Mason.

"The Golden Girls" were (clockwise from left) Estelle Getty as Sophia, Rue McClanahan as Blanche, Betty White as Rose and Bea Arthur as Dorothy.