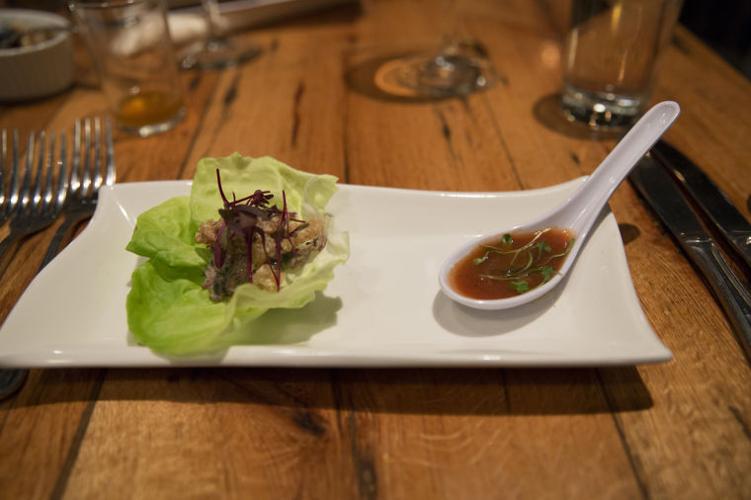 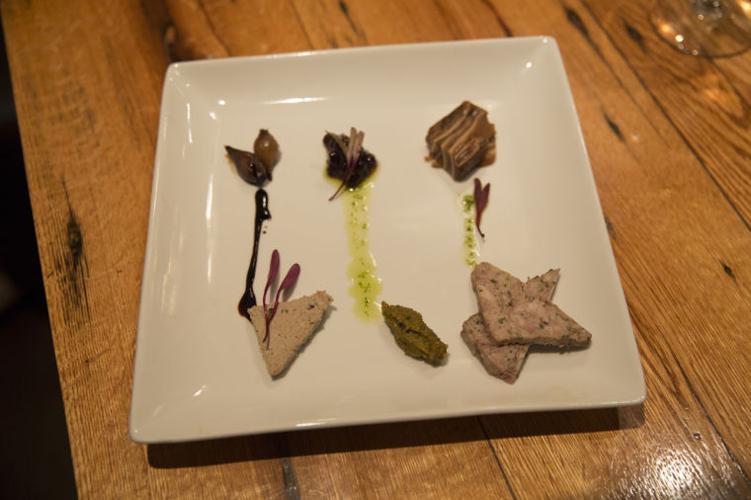 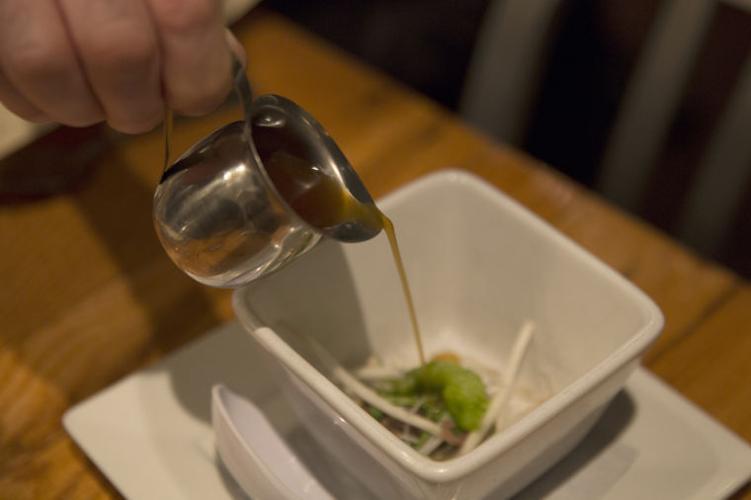 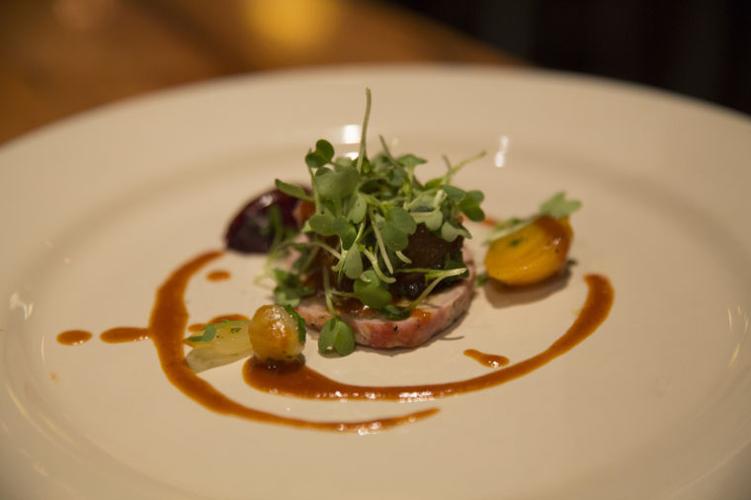 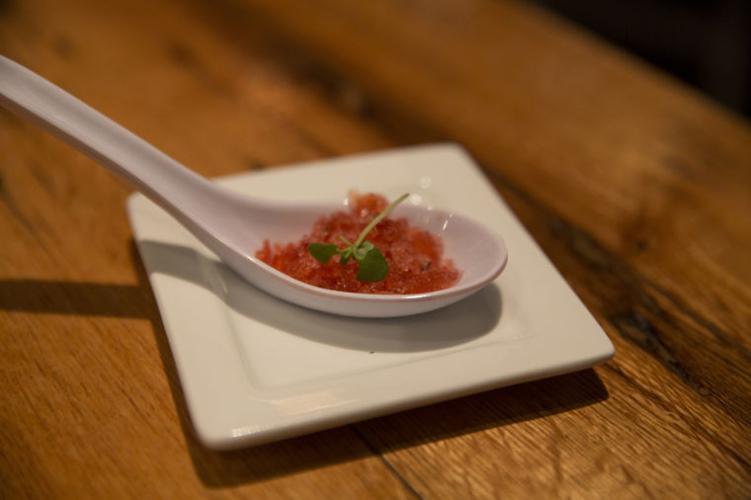 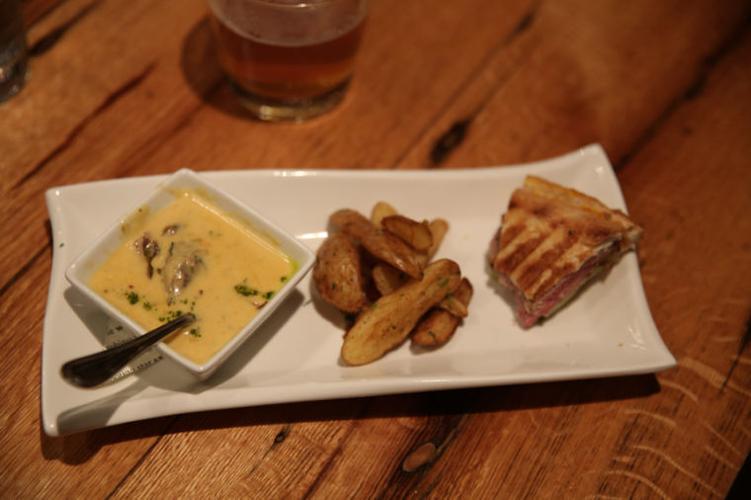 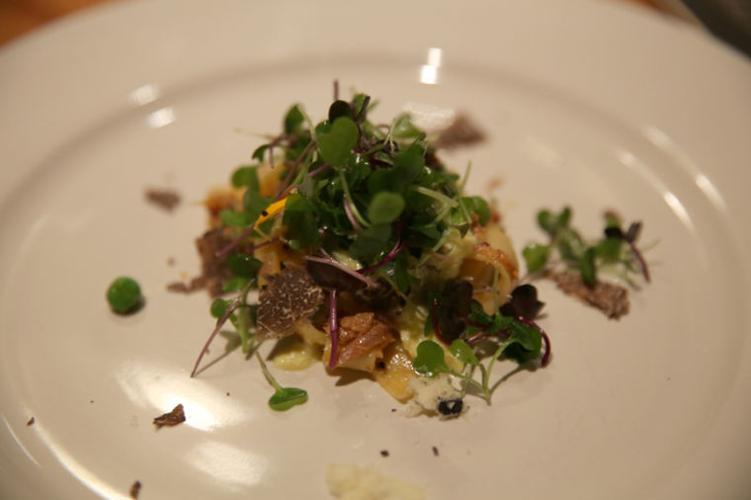 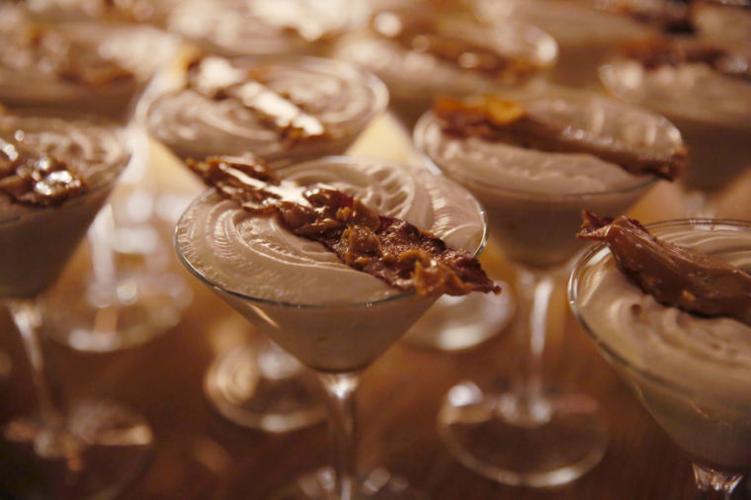 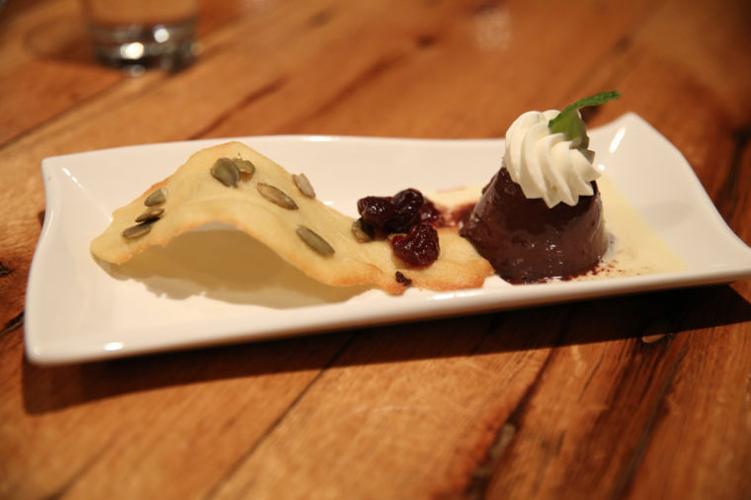 Dishcrawl suppers were too good to stay a secret. Now, Greensboro residents can find out why.

Dishcrawl sponsors special event evenings arranged around food themes. Sometimes, it’s a progressive dinner with an appetizer in one restaurant, an entrée in another and a dessert in a third. Or it’s a series of dishes in one location.

Chef Chris Blackburn, a GTCC culinary program graduate, prepared dishes from “nose to tail.” It was one of the most sophisticated, creative and overall best meals I have ever had in North Carolina.

vodka.com), one of the co-sponsors. The North Carolina product is distilled from sweet potatoes; it has some light caramel-like flavor of its own.

Tables were set in advance with portions of pork skin and roasted black eye peas — crunchy-crisp, a down-home memory for those of us who have shared food experiences in eastern North Carolina.

Shortly after seating, servers delivered an amuse bouche of Chili Braised Tongue and Guilford College Radish sprinkled with tarragon vinegar, hosted on butter crunch lettuce decorated with micro greens. We rolled the lettuce around the main ingredient and picked it up with our fingers. My wife commented that if she had seen this on a menu or known in advance what she was eating, she would have passed it over.

But we were all delighted with a texture and flavor somewhat akin to a very tender pork roast, not fatty at all.

Surprise and delight as we encountered unfamiliar ingredients characterized the evening. There’s more to a pig than pork chops.

A pâté and charcuterie plate followed — one smooth pâté of pork liver and a coarse-textured country pâté prepared from offal (organ meats), primarily the heart and hind shank (aka “Appalachian oysters”), with cranberries and cinnamon. Imagine a really sophisticated sausage, delicately flavored. A terrine layered with ear meat was held together by gelatin, a byproduct of pressure cooking the ears in red wine with parsley, rosemary, anise and allspice. The ears generated a fairly firm texture. Condiments included pistachio maple butter, pearl onions soaked in sweet balsamic vinegar and violet honey mustard.

We encountered molecular cuisine in the next course — the first time I have seen such preparations in the Triad.

A pork Bordelaise sauce enhanced Tea Smoked Loin and Belly. Pork belly is essentially thick bacon, with concomitant flavor. Loin, of course, is a conventional meat with which we are all familiar. Currant jam, simmered with Covington vodka, lent a slightly sweet dimension to the meats. Micro mizuna greens (peppery, similar to arugula in flavor), baby beets and pearl onions completed the conception.

A little “intermezzo” palate refresher of Cheerwine granita (a lightly frozen ice, a specialized sorbet) was accented with preserved lemon and thyme.

Heading into the home stretch, we received small Cuban sandwiches made with pork cheek confit. I expected a fatty effect from the cheeks but found just rich flavor emerging from tender meat.

Smoked fingerling potato wedges with beer and cheddar soup were the sides. The soup was thick and rich; I used it as a dipping sauce for the sandwich as well as a soup.

When Dishcrawl hostess Kristi Maier introduced her to the audience, I felt honored to meet her. (You can order truffles from her website.)

Dessert combined chocolate with cooked blood, black pepper and allspice to create a variation on Panna Cotta, enhanced with Bing cherries, a tuile (cookie) on the side, a dollop of Creme Anglaise center stage. The blood darkens the appearance and flavor, but you don’t actually get a blood taste from it. If you did not know what had been used, you would just praise the depth of chocolate flavor.

Cooking and serving the whole pig took courage as well as knowledge and skill. The outcome was well worth the risk of the adventure.

The base price for the dinner was $69. For an additional $30, guests received wine pairings with each dish, selected by Laurie Cole of Tryon Distributing and Meris Nye of Mutual Distributing.

To be candid: I have attended other events where I thought the wine selections were weak. But not this time. They chose quality wines well matched with each course.

Pate Dawson Southern Foods (http://pdco.com) was a co-sponsor. I was pleased to learn that Southern Foods is offering custom-cut, small-portion meats, not just wholesale and large deliveries.

The next Dishcrawl event is scheduled Jan. 22 in the Lindley Park neighborhood.

What: Dishcrawl Greensboro. The next dinner is themed around the Paleo diet.

Where: Four restaurants in the Lindley Park neighborhood of Greensboro

Etc: Seats are purchased in advance. The December event sold out well in advance of the event.

Dark for two long years, Triad Stage's 20th season will be as a 'stronger theater'

The regional professional theater, located downtown at 232 S. Elm St. will announce its 20th season of live, in-person performances at an event at 6 p.m. June 4.

100 worst TV shows of all time, according to IMDb

Here's a look at the 100 worst TV shows of all time, from “The Bold and the Beautiful” to “Toddlers and Tiaras.”

Here's a look at the albums that made the 1970s one of the most interesting decades in music history.

After going virtual in 2020 and canceling in 2021, the Parisian Promenade will return on June 5 to the Tanger Family Bicentennial Garden.

DGI’s Summer Passport Program challenges shoppers to spend $25 or more in a downtown business for the chance to win money.

The actress discussed her career and more in an interview with local educator and author Molly Sentell Haile to close out this season's Bryan Series at the Steven Tanger Center for the Performing Arts.

It's outdoor summer concert season, and we've gathered 17 concert series around the Triad

It’s time to get outside, have a picnic and listen to some live music. We’ve rounded up 17 outdoor music series in and around Greensboro. It’s…

State musicians can vie for stage at NC Folk Festival

Applicants for the Not Your Average Folk Contest must be from or live in North Carolina and have no deals with any major record labels to be considered. Applications close on June 12.