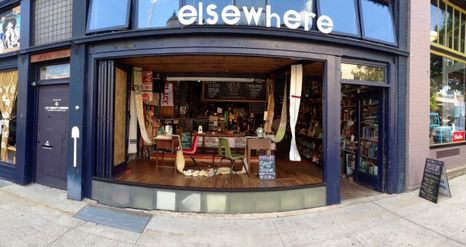 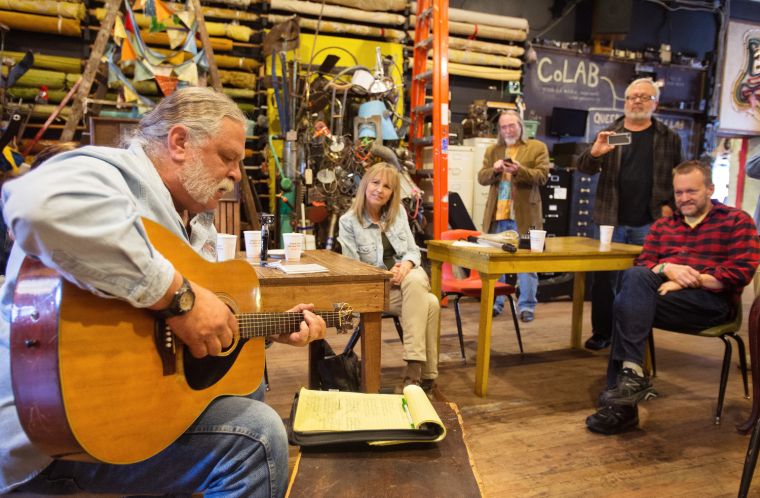 Songwriter Mike "Wezo" Wesolowski (left) plays the guitar while performing a song he and storyteller Anita Gilmore created. Wesolowski performed the song during a meeting of The Healing Blues project at Elsewhere in downtown Greensboro, N.C., Saturday, April 19, 2014.

GREENSBORO — George Scheer sees beauty in often-overlooked alleys and green spaces near Elsewhere, the downtown artist residency that he directs.

He also envisions how “artscaping” in those spaces — public art, plantings, lighting — could better connect downtown’s core with surrounding neighborhoods and encourage development.

Now, Elsewhere has received money to make that happen.

“It’s a creative way to connect overlooked and underutilized spaces in our South Elm Street neighborhood,” said Scheer, who cofounded Elsewhere in 2003 in a former thrift store at 606 S. Elm St.

Projects will be commissioned from more than 20 national and local artists, designers and collectives.

They will focus on:

Based in New York, ArtPlace is a collaboration of foundations, banks and federal agencies that advances the field of “creative placemaking,” in which art and culture play a central role in shaping communities.

Elsewhere is among 55 grantees out of 1,270 applicants selected for $14.7 million ArtPlace is awarding this year.

“It’s a tremendous coup for Elsewhere and for Greensboro,” said Tom Philion, president and CEO of ArtsGreensboro, the arts marketing and fundraising agency.

To date, ArtPlace has awarded $56.8 million to projects serving 122 communities across 42 states and the District of Columbia.

“Greensboro is becoming part of a national network that is using art to engage their community in a really advanced way,” Scheer said.

About 18 months of work lies ahead to bring the artscapes to fruition.

Organizers will involve surrounding neighborhoods as they create an art selection committee, recruit potential artists, prepare requests for proposals, send them to select artists and decide who will do the work.

“This is an initiative to bring together neighborhoods with local and global artists and imagine creative interventions into these sites,” Scheer said.

The artscapes also should enhance walkability between downtown and surrounding neighborhoods, Scheer said.

Assistant City Manager Andy Scott is among those in city government who will help with code compliance, permits and technical issues.

GREENSBORO — Elsewhere, a living museum and artist residency program, has received a $200,000 grant from ArtPlace America for an "artscaping" project in its South Elm Street neighborhood.

Elsewhere, set in a former thrift store at 606 South Elm St., announced in a news release Thursday that it is among 55 grantees selected out of 1,270 applicants for the grant this year.

The grant will be used to activate four alleyways and green-spaces under its South Elm Projects effort, according to a news release. This ‘artscaping’ project will connect downtown’s core with surrounding neighborhoods, advancing creative partnerships, social access and walkability in public passages. Projects will be commissioned from more than 20 national and local artists, designers and collectives.

"In 2003, when we first entered my grandmother's store in what was then a very sleepy downtown, we knew that Elsewhere's success was intimately tied to the growth of South Elm as a neighborhood," Elsewhere’s co-founder and Director George Scheer said in the news release.

"From day one we worked to be a catalyst and anchor for a creative evolution," Scheer said. "Artplace marks the next stage in that transformation. In advance of mega development, we have an opportunity to grow and secure the collaborative character and inclusive spirit of our neighborhood."

Linda A. Carlisle, former secretary of the N.C. Department of Cultural Resources, said: “Elsewhere demonstrates the power of visionary arts and grassroots culture in revitalizing our city. Elsewhere is putting Greensboro on the map for creativity and innovation.”

"The value of this project is that it utilizes art to affirm and increase the life of the city," Powell said in the release.

According to Scheer, South Elm Projects will engage a dynamic process of community visioning and cultural imagination and extend Elsewhere’s 12-year legacy of re-purposeful design and collaborative partnerships into the streets, starting with the alley behind its building, and extending throughout its neighborhood.

ArtPlace America is a collaboration of several foundations. It advances the field of creative placemaking, in which art and culture play a central role in shaping communities’ social, physical, and economic futures. To date, ArtPlace has awarded $56.8 million through 189 grants to projects serving 122 communities across 42 states and the District of Columbia.

“Investing in and supporting the arts have a profound impact on the social, physical, and economic futures of communities,” ArtPlace Executive Director Jamie L. Bennett said in the release. “Projects like these demonstrate how imaginative and committed people are when it comes to enhancing their communities with creative interventions and thoughtful practices.”

Milton Kern, who owns several properties downtown, is angry that Downtown Greensboro Inc. is directing people to the coliseum for Independence Day fireworks.

GREENSBORO -- Shannon Stewart tapped his feet to the music, nodding his head and smiling with recognition.

Songwriter Mike "Wezo" Wesolowski (left) plays the guitar while performing a song he and storyteller Anita Gilmore created. Wesolowski performed the song during a meeting of The Healing Blues project at Elsewhere in downtown Greensboro, N.C., Saturday, April 19, 2014.