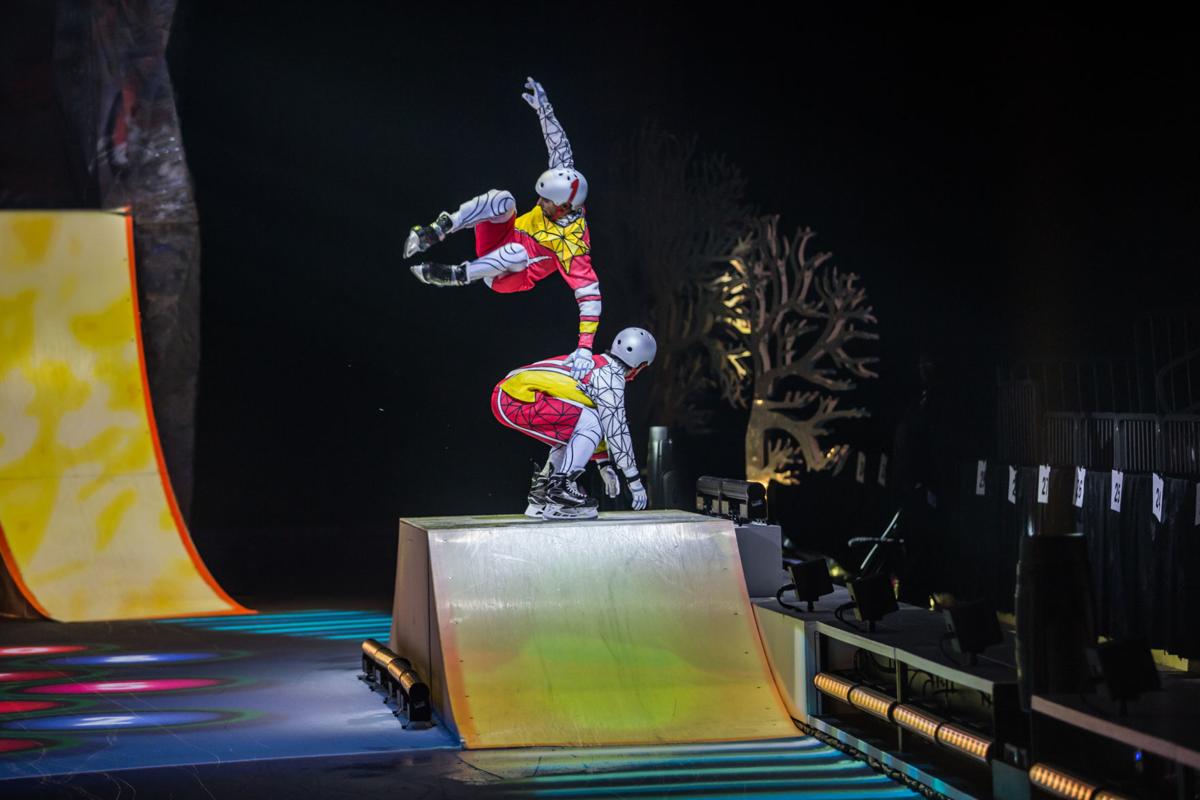 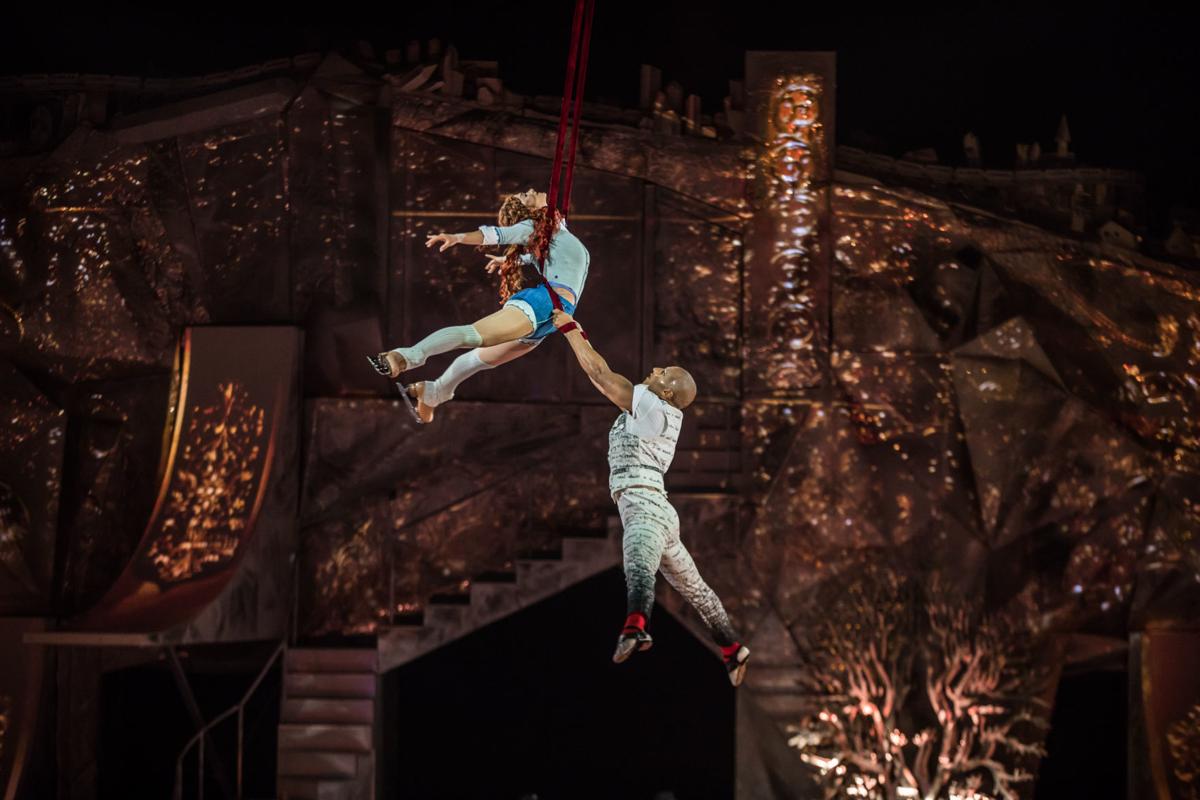 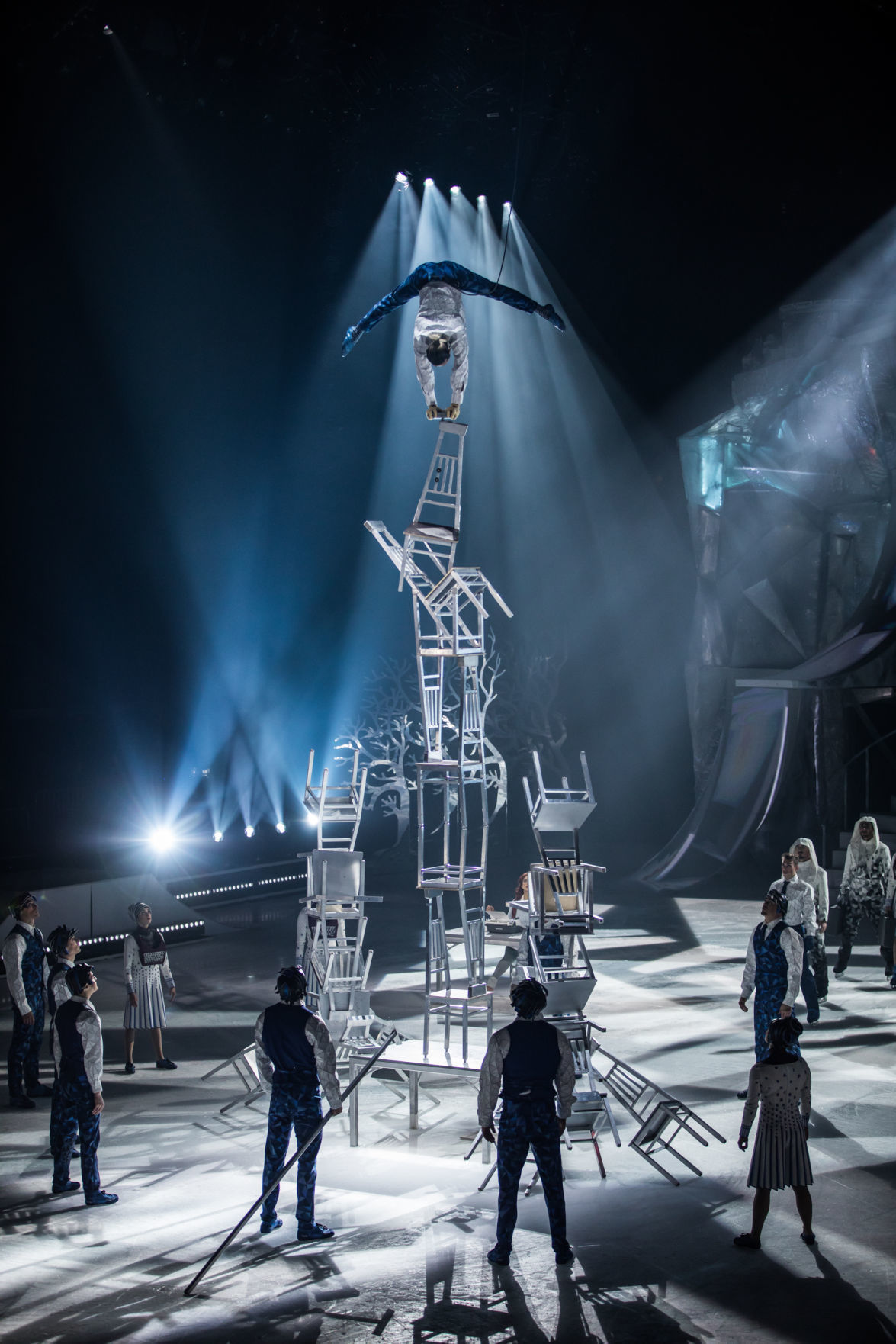 The Cirque du Soleil acrobats say the hardest part of “Crystal” was figuring out how to perform in skates on ice. 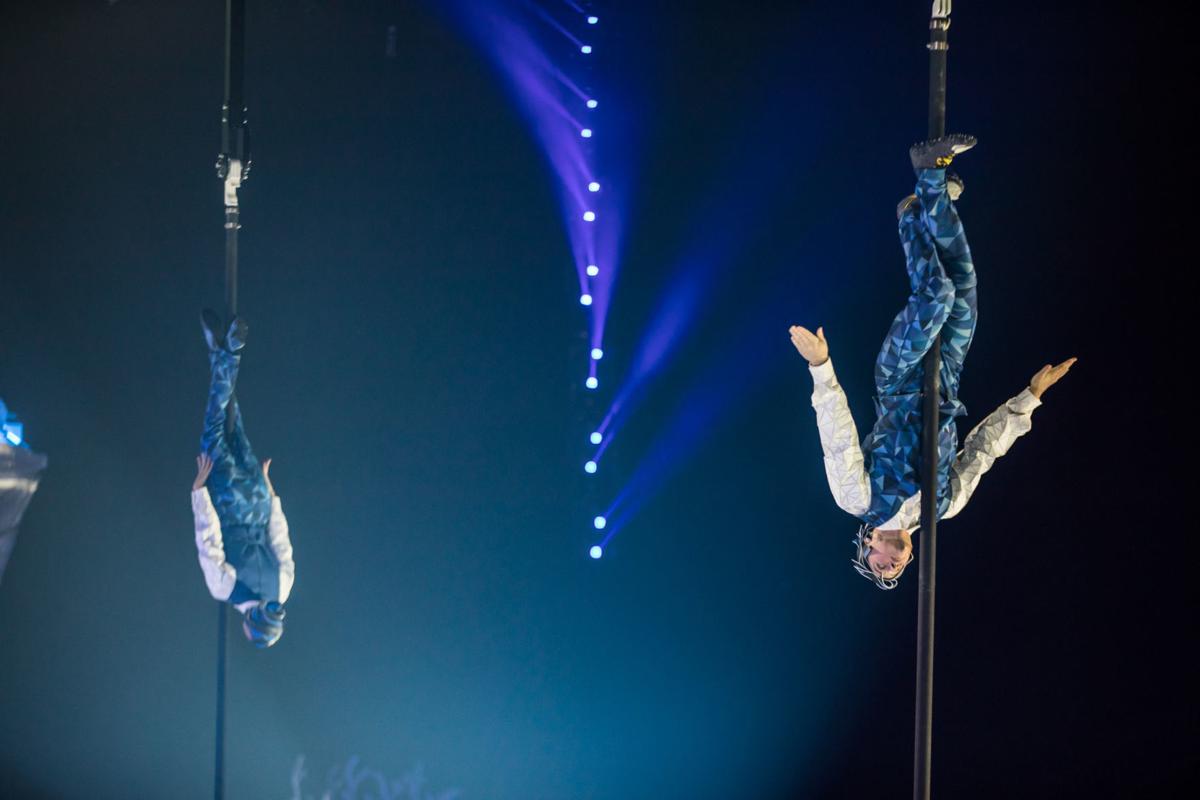 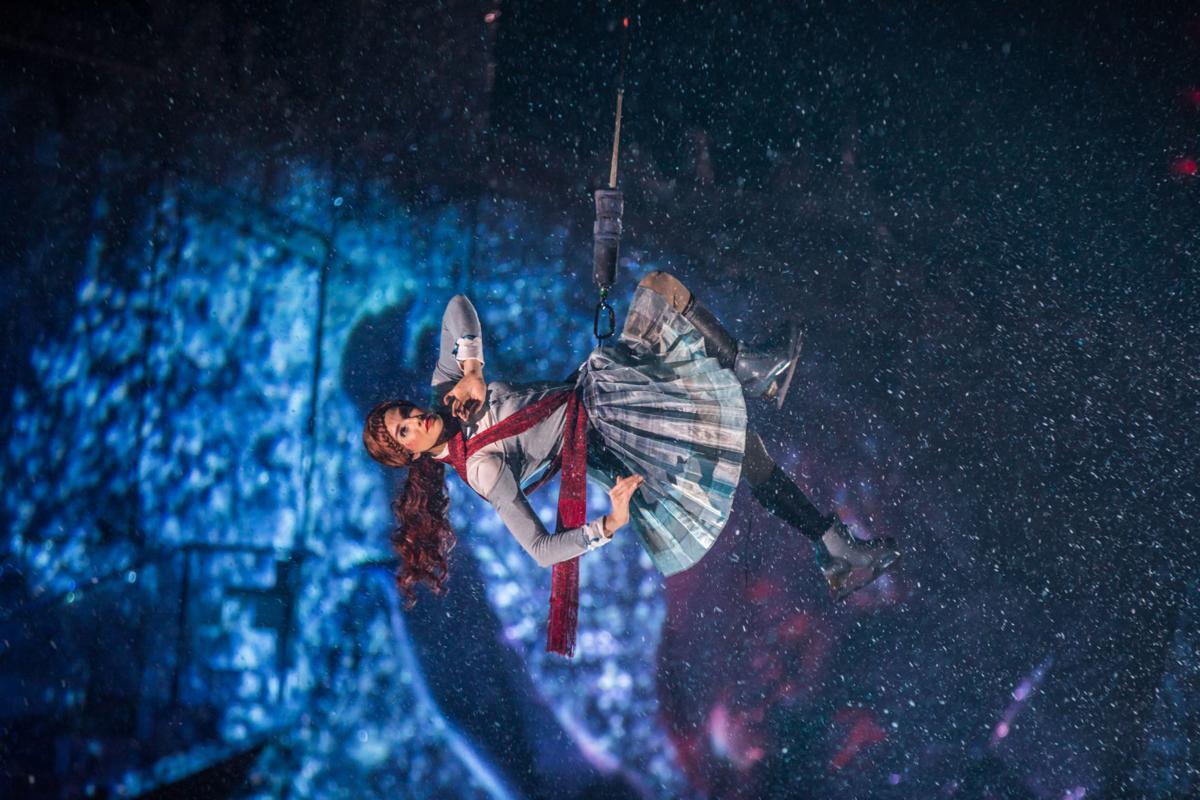 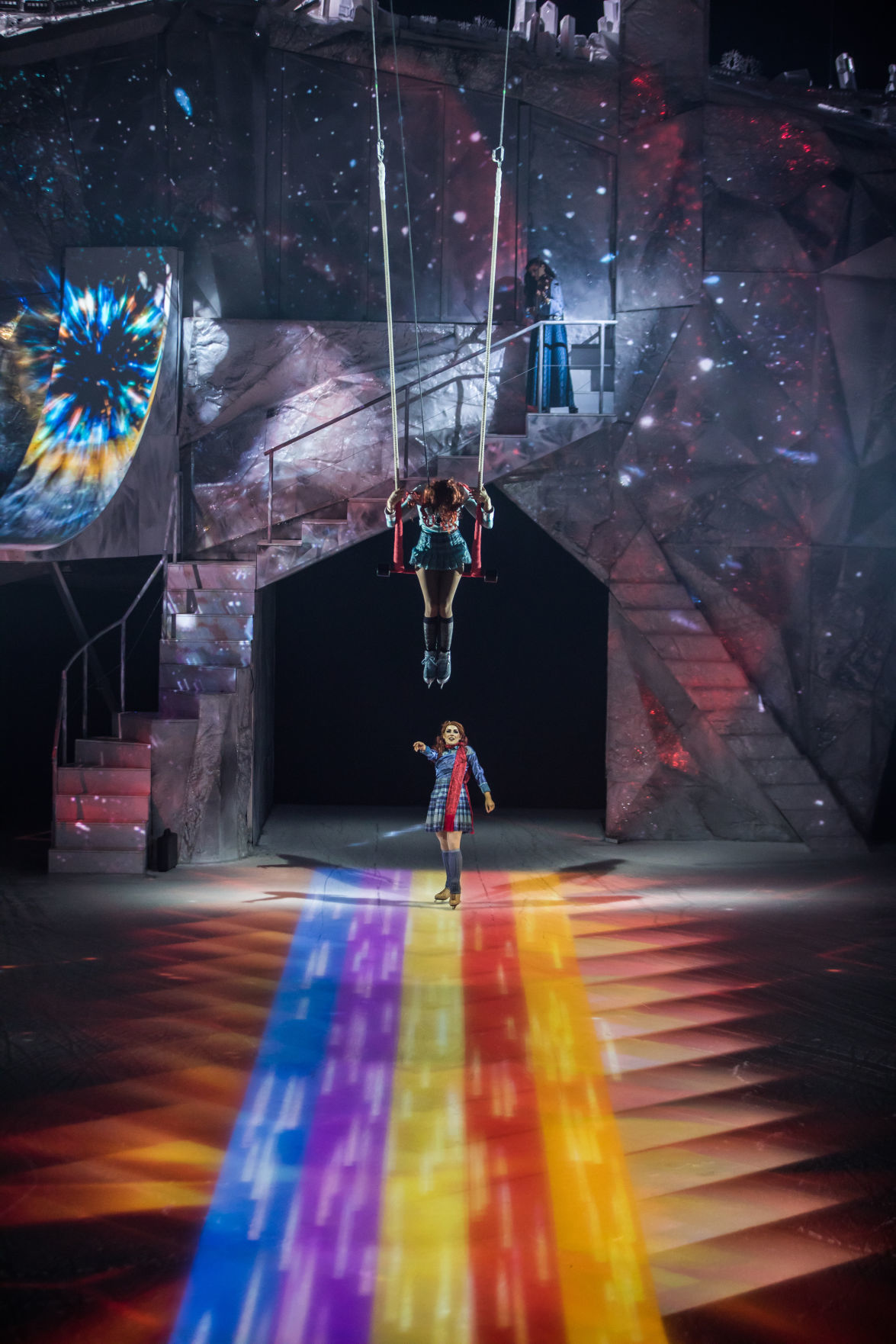 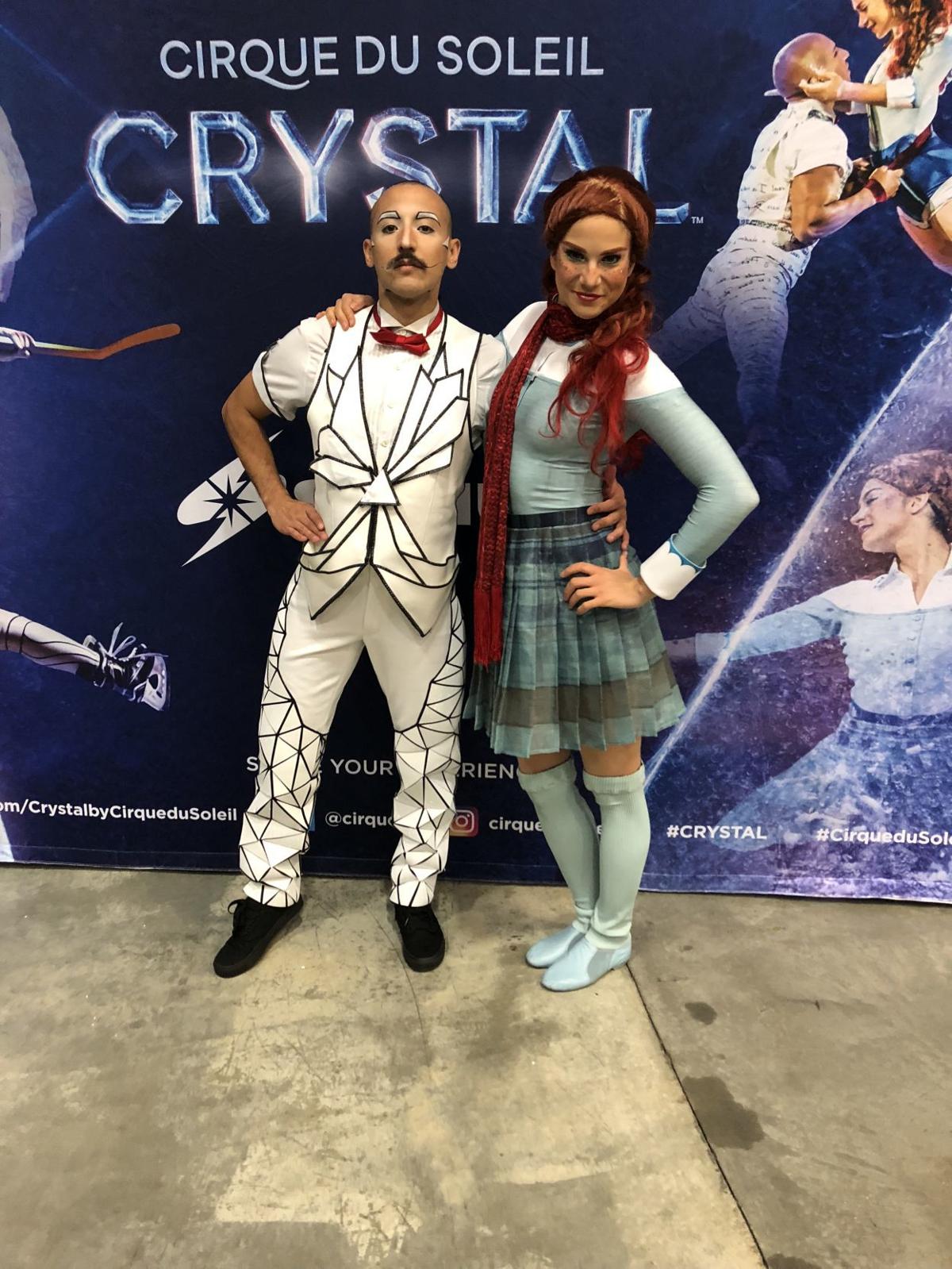 For years, Cirque du Soleil has dazzled audiences around the globe with its gravity-defying productions that incorporate lavish themes ranging from a tribute to the Beatles to the elegance of water.

Last year, the company began working on what may be its most challenging show to date: “Crystal.” The production, which comes to the Greensboro Coliseum on Aug. 22-26, takes the eye-popping acrobatics for which Cirque is known and ups the ante by performing them on ice.

“It’s an idea that Cirque had for a few years but wanted to wait until having the right elements to bring together skating and acrobatics,” says Julie Desmarais, the publicist for Cirque du Soleil “Crystal.” “We wanted to work with skating experts along with acrobatic coaches to see how we could implement acrobatics onto the ice.”

That process began in spring 2017, when the directors began working with acrobats, skaters and even Olympians Benjamin Agosto and Kurt Browning to figure out how to incorporate the acrobatic elements of the show with ice skating.

After that, the cast went into a three-month rehearsal period to learn the routines and hone their techniques — no small feat for such performers as Danica Gagnon-Plamondon, a trapeze artist who had to learn to perform her high-flying routines while wearing ice skates.

“We tried different types of ice skates to see if it would be easier with a fake blade, but finally we decided on the real, normal ice skates that I have on my feet during the show,” she says. “It adds weight for sure, and it was kind of like going into a new learning curve for me, kind of relearning my tricks. It was more feasible than I thought — it was a good surprise.”

Gagnon-Plamondon had some experience on skates from childhood trips to the rink with her family, but other performers, such as juggler Jorge Petit, not only had to learn their routines for the show, they also had to learn how to ice skate.

“The moving part of being on skates was tough because normally when you juggle, you stay still in the same place,” Petit says. “So learning how to skate and move and juggle at the same time took a lot of practice, and also I had to change the technique, because I bounce the balls and I throw them in the air. I had to change everything from the angle of how I throw the balls when I bounce them or when I throw them up. And I learned how to ice skate at the same time as developing the technique to juggle on ice.”

Because this is a brand-new show for Cirque du Soleil, the performers got the rare opportunity to be a part of the show’s creation — not only trying out the performance aspects to determine feasibility, but also adding their own ideas and skills to the overall script.

“It was a lot of research at first, trying new ideas to see if they work or not,” Petit says. “So spending time learning how to skate first and trying ideas the directors had because they have one idea, but we need to try them and then put your own ideas and skills on it. So the first month was a lot of trying and seeing what works. And from there it was just a lot of practice to be stable and the technique and to build the act.”

That process of working together and challenging one another was one of the major draws for Gagnon-Plamondon.

“For me, I had been doing swing trapeze for nine years, and it’s always fun and I still love it, but to add another challenging aspect and to change it and break the routine was exciting,” she says. “And just the opportunity to really try something different because it was the first time Cirque has done something like that. I was really happy to be a part of that really unique creation.”

With a show that essentially marries two very different types of performance — ice skating and acrobatics/circus acts — it was critical that the cast members find ways to mesh their talents so the presentation didn’t feel disjointed.

“The idea of mixing both worlds was definitely something new,” Gagnon-Plamondon says. “So there were a lot of tryouts to find the balance together, and us learning how to ice skate and the skaters learning acrobatics, so when you see the show it’s not separate worlds — it’s really about coming together.

“So the creation was a lot about how to blend the two worlds together. We all had our backgrounds — we are acrobats, circus artists and the figure skaters, so we all have our strengths. But to come together and put our skills together was the challenge, so we did have long days of rehearsals during the creation, and we still have practice before the show,” she says. “We all have our different routines and ways to warm up, but we all go through practice and warm up together.”

The show tells the story of Crystal, a young woman who embarks on a journey of self-discovery, led by her reflection into a world of imagination. Gagnon-Plamondon says that while the show will appeal to audiences of all ages and genders, she thinks it will definitely speak to young women and girls with its story of female strength and empowerment.

Those emotions are conveyed not only through the performers but also the music, which includes original songs written just for this show.

“You go through a wide scale of emotions, so you can be really touched by the show, but you’re also going to laugh,” Gagnon-Plamondon says. “You can relate to the character, and I think there’s a little something for everyone, whether you’re looking to be touched or amazed. There’s the wow factor but there’s also a poetic factor.”

For both Gagnon-Plamondon and Petit, connecting to audiences that way every night makes their work feel less like a job and more like a great adventure. That feeling is only magnified by their tour experience, traveling the country with a diverse group that includes cast members of 16 different nationalities.

“We learn from each other,” Gagnon-Plamondon says. “We like to use the term ‘circus family’ a lot. It’s really true because when you’re on tour like this together you become a family really quickly and the relationships and friendships get really deep fast.”

Gladys Knight to perform at Tanger Center in Greensboro

The 7:30 p.m. concert on Nov. 17 will be part of a weeklong celebration to mark the Tanger Center's opening. More details will be announced later.

"It exceeded all the expectations we had for a return to a live in-person festival," N.C. Folk Festival president and chief executive officer Amy Grossmann said of this year's event.

The hit Broadway show “Wicked” is onstage through Oct. 24 at the Steven Tanger Center for the Performing Arts, 300 N. Elm St. in Greensboro.

At 85, Buddy Guy is still working to keep the blues alive at The Ramkat in Winston-Salem

How do you define the blues? Carlos Santana, John Mayer, Kingfish and Gary Clark Jr. answer the question differently in a new documentary, but…

The Cirque du Soleil acrobats say the hardest part of “Crystal” was figuring out how to perform in skates on ice.