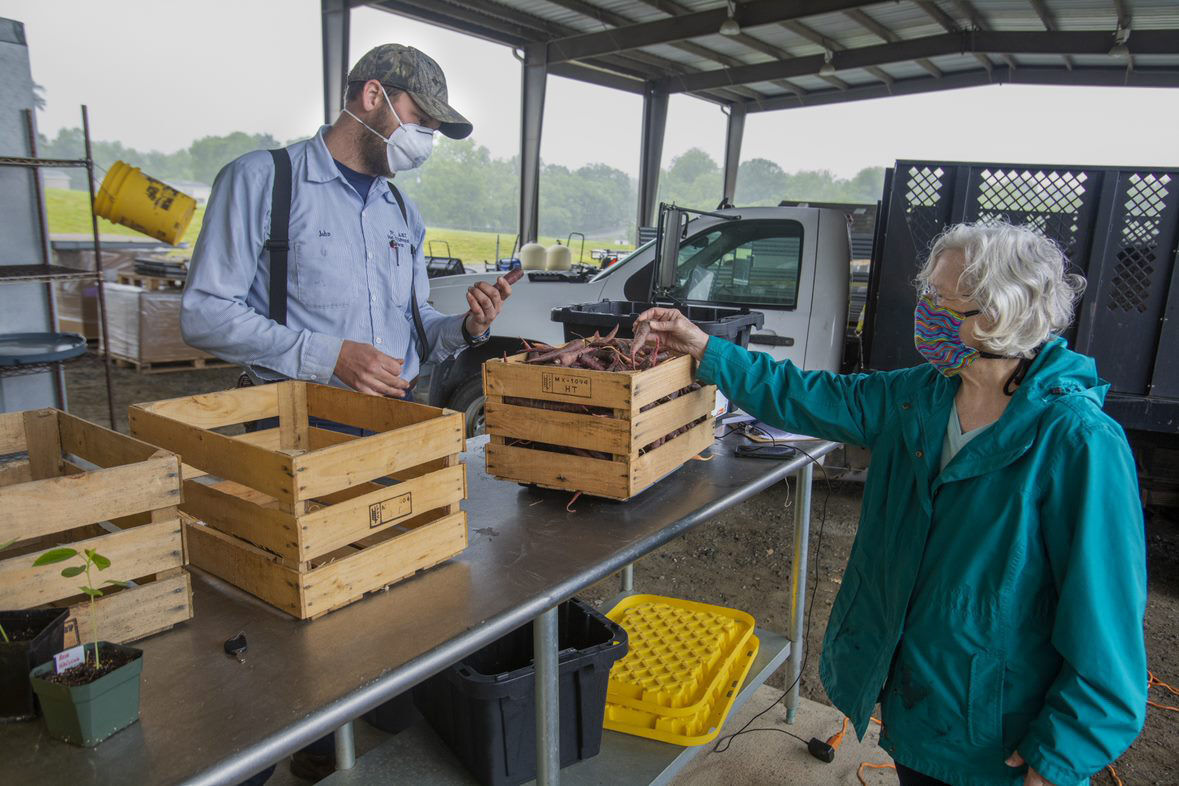 Kimes prepares farm-grown carrots and cucumbers for pickup by Linda Anderson, the chairperson of Share the Harvest. The local organization is a beneficiary of the farm’s produce. “There’s always a need, but it’s much bigger this year,” Anderson says. 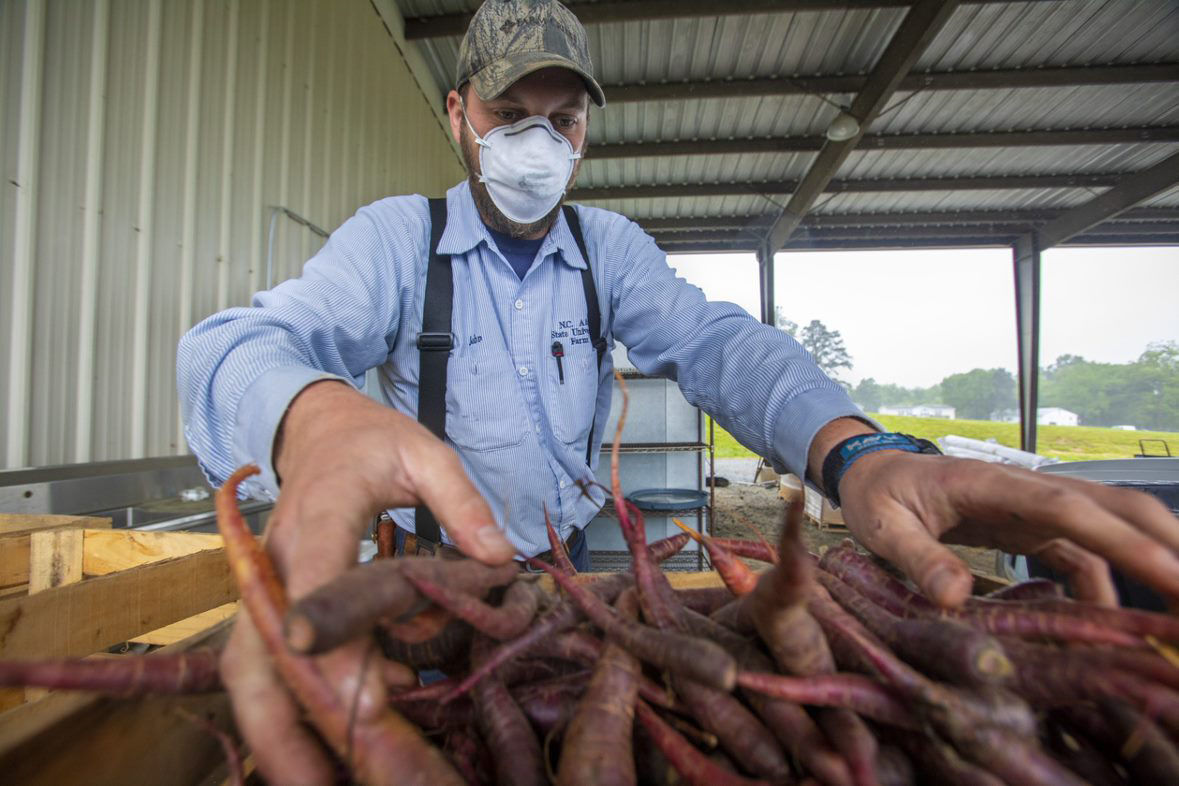 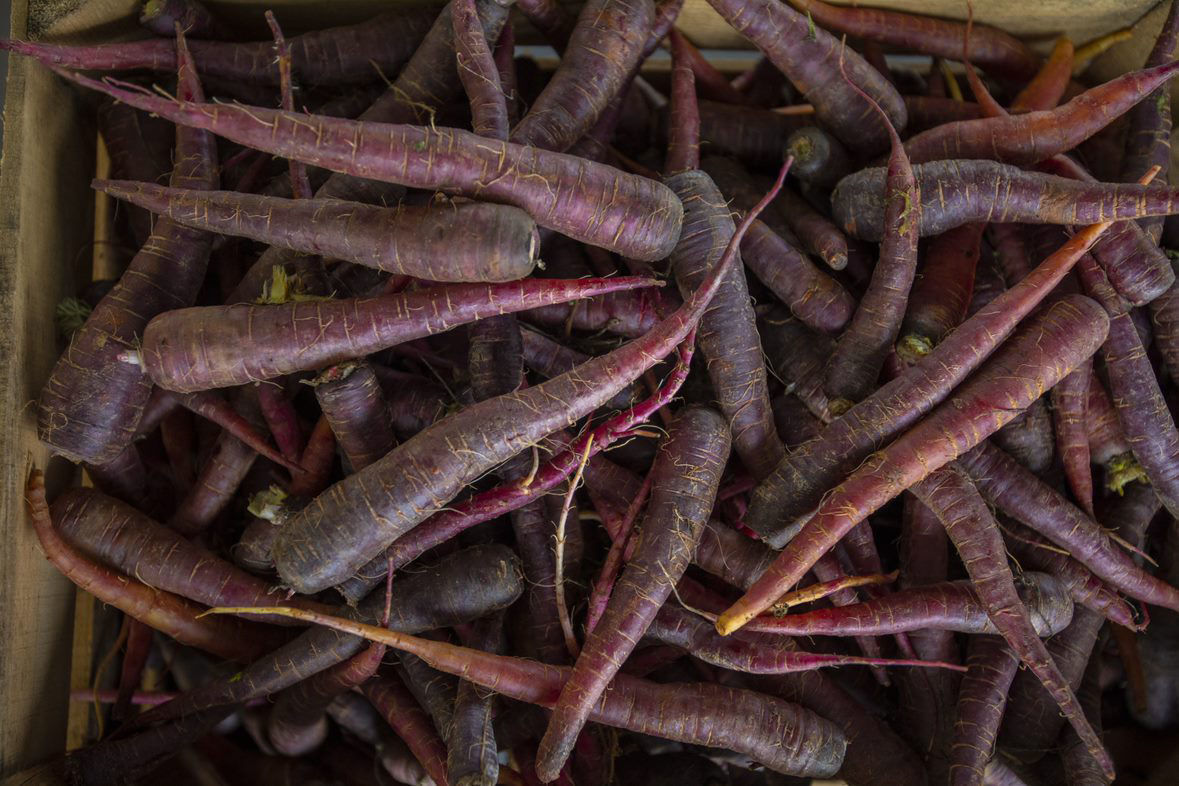 Purple carrots, one of the farm’s more exotic varieties, are rich in nutrients like their common counterparts.

By Lydian Bernhardt Averitt Special to the News & Record

GREENSBORO — The COVID-19 outbreak has left many North Carolinians sheltered at home, wondering when life will return to normal. But for N.C. A&T’s College of Agriculture and Environmental Sciences, the pandemic has been a call to action.

From food to clothing to health, the programs of this diverse college cover all of people’s basic needs, and the faculty, staff and students are eager to share what they know with the community, Dean Mohamed Ahmedna said.

“The College of Agriculture and Environmental Sciences is here for the community,” Ahmedna said. “Outreach is a part of our programs and a value that we teach our students under any circumstances, but especially now in this time of crisis. Our faculty and staff have expertise in everything that’s needed to sustain life, be it food, clothing or health practices, and it’s expertise that we are glad to share.”

The high-tunnel green peppers of horticulture professor Sanjun Gu didn’t know that a pandemic was happening.

Neither did the cucumbers, eggplant, tomato, watermelons and cantaloupe that he and his research team had planted at the University Farm at N.C. A&T in March, the usual start of the growing season.

The team’s plan was to test the ideal growing conditions of these common vegetable crops to see if they grow better with one layer of plastic on top of the soil to keep it warmer, or two layers. The results would go out to farmers statewide, with Gu and the team sharing the how and why to help them become more efficient, profitable growers.

Then came COVID-19, sheltering in place and the necessity that students — including student volunteers and student research assistants — leave campus.

The first harvest came in recently, and despite the university being shut down of all but its essential workers, the growing and donating continued.

Typically, the farm, located at 3174 McConnell Road in eastern Greensboro, raises tons of produce, the result of projects that faculty, staff and students are working on, and donates about 10,000 pounds a year. Most of the donations will go to the farm’s community partners, Share the Harvest and the Out of the Garden Project.

“We donate most of it to those two groups, and then give away a fair amount here on campus that’s not included in that figure,” said John Kimes, the farm’s horticulture manager.

In this most atypical year, however, those donations were even more important.

“It’s extra busy with so many people out of work this year, and so many other places are closed now,” said Linda Anderson, the chairwoman of Share the Harvest, an organization that donates fresh produce to agencies throughout Greensboro that prepare meals or keep food pantries. “The farm does such a beautiful job of meeting this need.”

Workers from those organizations bring their own crates to pick up produce and transport it off the farm. At the farm, Kimes — currently working with a staff of three, a portion of his usual staff — weighs and logs all the produce donated.

“It’s such a bonus to get fresh produce — most of the people who use a food pantry expect to receive cans,” Anderson said. “Instead, even in the middle of a pandemic, we can give out fresh food from the farm. We are so thankful for our community partners.”

When Absonutrix, a Greensboro company, needed help with COVID-19 personal protective equipment, it knew just who to call to get a stylish one: a professor in N.C. A&T’s Department of Fashion Merchandising and Design.

Absonutrix, a local supplier of health, weight loss, sports and beauty supplements, was running low on face masks for its workers. Himanshu Nautiyal, the company’s president and CEO and a friend of associate professor Geetika Jaiswal’s, knew she taught sewing in her courses and reached out to see if Jaiswal could offer some lessons on how to sew the masks.

Instead of training just one person, Jaiswal thought, why not involve the department and include alumni and students? And with more people to sew, why not set a goal for 100 masks?

“They’re not hard to make,” Jaiswal said. “It only takes about 45 minutes per mask. I thought that the students could get the experience, and we could help a local business.”

“Times are tough and it’s the end of the semester,” Jaiswal said. “Not everyone can afford to go buy the right fabric for masks. Having the right fabric was really great — research shows that cotton is better than the others. I sent around a handout for how to make the masks, and everyone went to work. Some of the students are putting in extra touches, like pouches for filters.”

Jaiswal sent a shipment of 104 masks to Absonutrix at the end of the semester, and masks never looked so fashionable.

“All of our employees were very thankful for the masks, which were much needed,” said Nautiyal, the Absonutrix CEO. “I thank Dr. Jaiswal for coordinating this drive, and her team of volunteers for supplying the homemade masks to safeguard the health of our employees.”

Ordinarily, by the start of the summer terms, lecturer Odile Huchette, her students and her colleagues in the Department of Natural Resources and Environmental Design would have gardens planted and propagation projects spreading out and reaching for the sun all over campus, at the student farm, in the Reid Greenhouse and on the Urban Food Platform.

All of that activity screeched to a halt in mid-March when the state’s response to slow the spread of the COVID-19 virus brought a temporary end to face-to-face teaching and life on campus.

“We had a lot going on with the students,” Huchette said. “I teach classes with a lot of hands-on, and we were ready to explode with many different activities. And all of that just stopped.”

What didn’t stop, however, were the plants. Lettuce, mustard greens, broccoli and kale, planted at the beginning of the semester, were ready for harvesting at the Reid Greenhouse, the Urban Food Platform and the student farm.

With a state deadline to shelter in place looming, Huchette and Reid Greenhouse research technician Alex Wofford decided to take steps to make sure the food went to a good use and that students’ efforts didn’t go by the wayside.

“We had to figure it out in a very short time,” Huchette said. “We had so much produce, and we heard that agencies were being overwhelmed with demand. We wanted to make sure the students’ work wasn’t wasted and that we had done what we could to feed the community.

“There was no way that I was going to put all that food in the trash can.”

Ordinarily, students would be planting, tending the produce. But with COVID-19 restrictions in place, the students had been told to leave campus.

Working together, the pair harvested and donated 35 pounds of kale from a student’s senior STEM project collecting weather data at the Urban Food Platform on campus, as well as 11 flats — about 500 plants — of lettuce, kale and mustard from the plant propagation class. They donated the produce to the nonprofit Out of the Garden Project to be distributed to the community; the seedlings were given to community and school gardens in need through Guilford County Cooperative Extension.

As she made the donations, Huchette took pictures to show her students what became of their semester’s labors. Many of her students are community volunteers who would be glad to know that their work went to a good cause, she said.

A few days later, Huchette harvested and donated another 13 pounds of kale from the student’s project, 12 pounds broccoli from the student farm and a flat of mustard seedlings produced by students for Out of the Garden Project’s urban teaching farm.

Lily Emendy of Out of the Garden Project said that although every donation is valued, donations from community partners like N.C. A&T are especially meaningful in times like these.

“I’m sure it would have been easier to let all that viable produce go to seed and be turned back into the soil. It certainly would have taken far less time than it took to hand-harvest all those bunches of greens and heads of broccoli, package them to be easily distributed, and coordinate with me,” Emendy said.

“I think that it speaks volumes about why we’re doing this work — that we care about taking action to affect change, not just talking about it.”

Kimes prepares farm-grown carrots and cucumbers for pickup by Linda Anderson, the chairperson of Share the Harvest. The local organization is a beneficiary of the farm’s produce. “There’s always a need, but it’s much bigger this year,” Anderson says.

Purple carrots, one of the farm’s more exotic varieties, are rich in nutrients like their common counterparts.