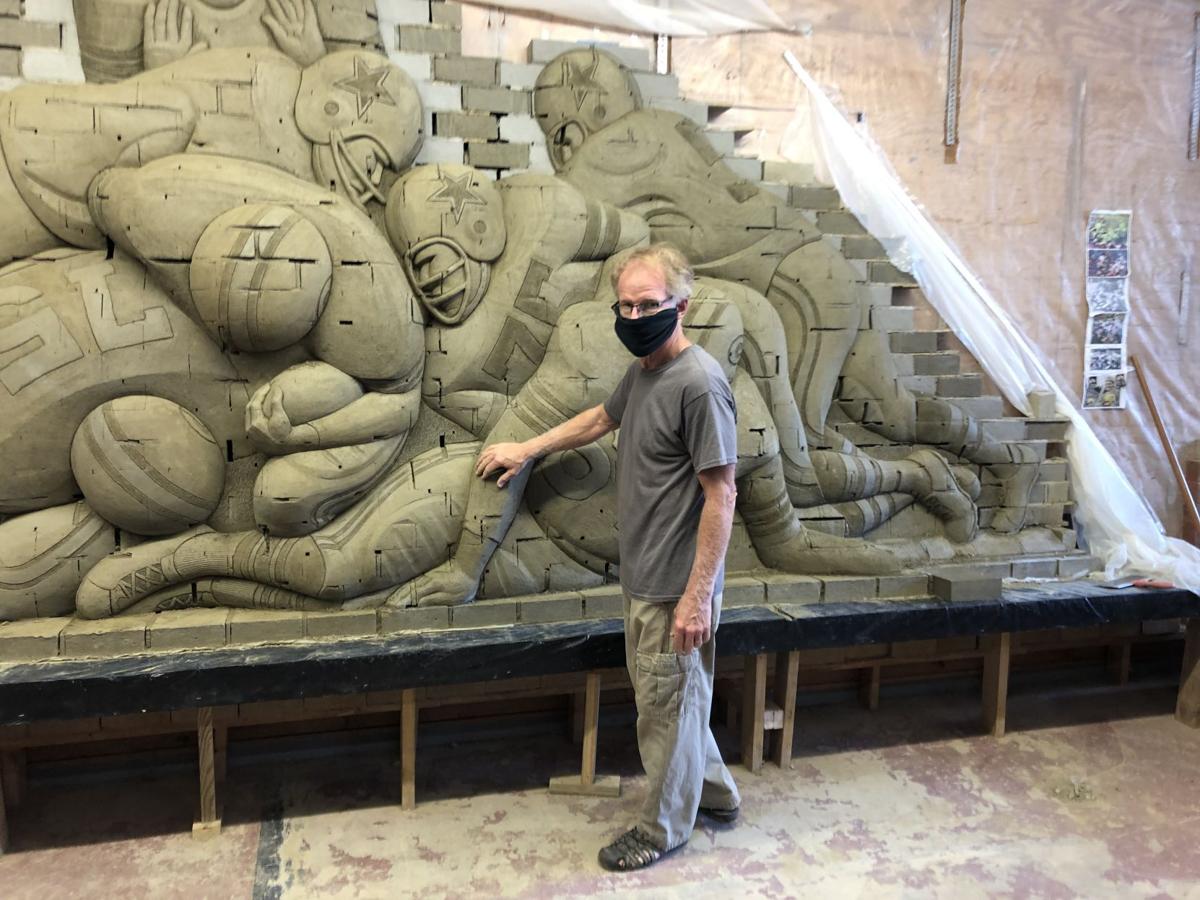 Reidsville artist Brad Spencer is nearing completion of a sculpture depicting the 1967 Ice Bowl, which will be displayed outside of the Pro Football Hall of Fame in Canton, Ohio this fall. 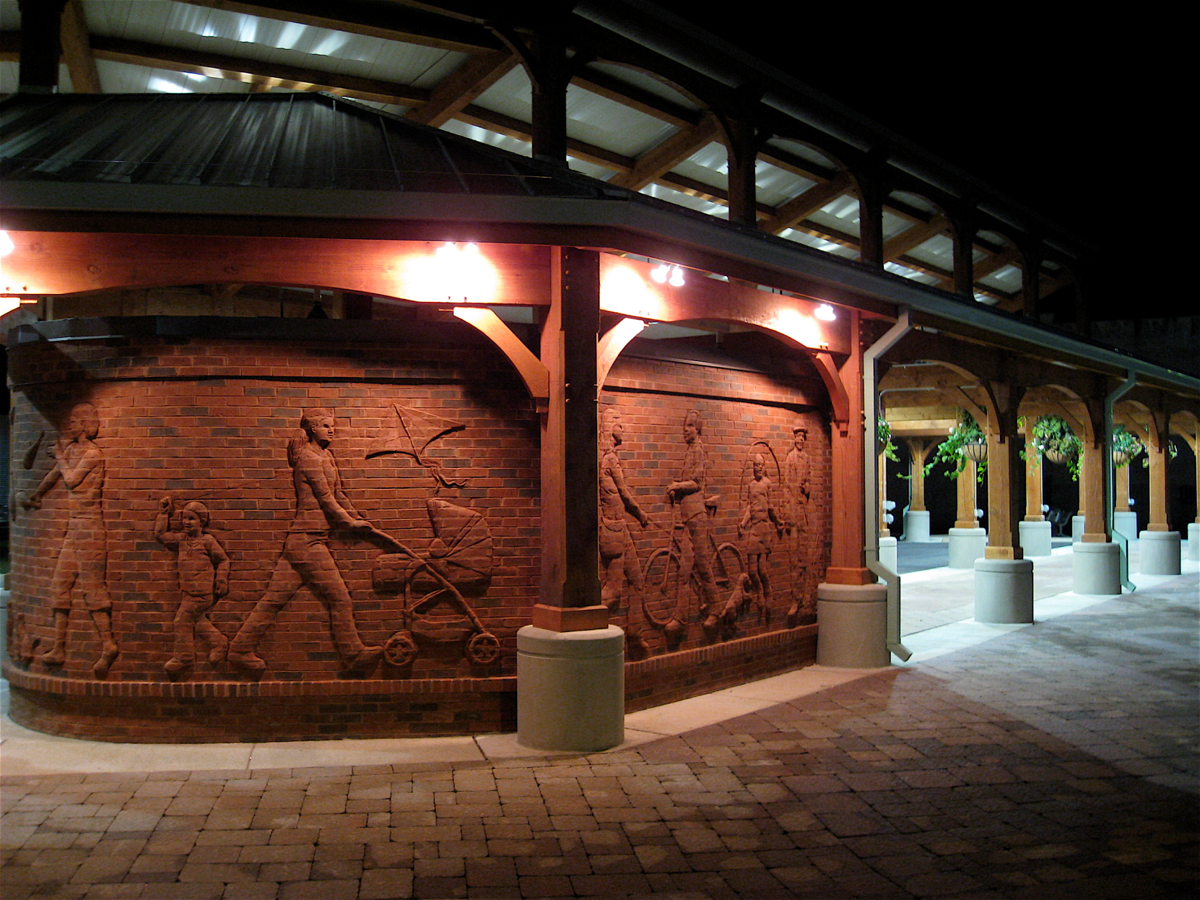 Brad Spencer's other work includes the brick sculptures in Market Square in Reidsville. 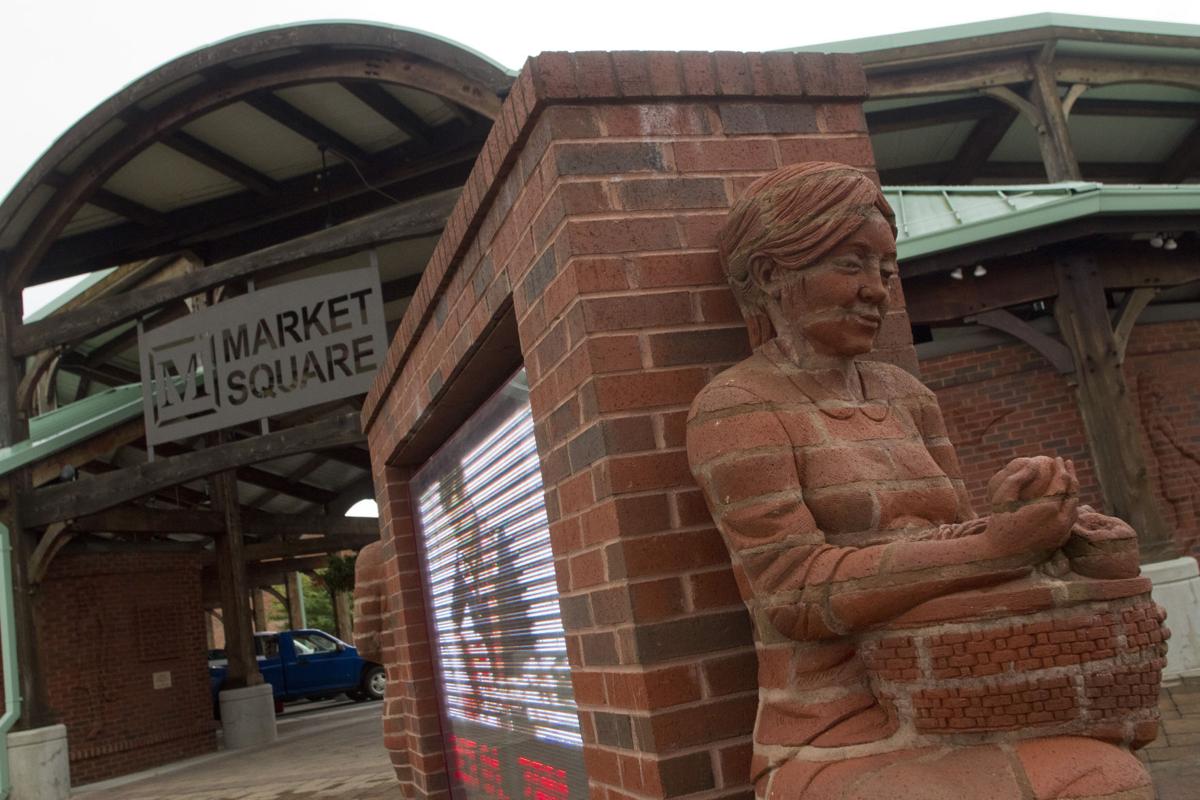 Reidsville artist Brad Spencer is nearing completion of a sculpture depicting the 1967 Ice Bowl, which will be displayed outside of the Pro Football Hall of Fame in Canton, Ohio this fall.

Brad Spencer's other work includes the brick sculptures in Market Square in Reidsville.

Acclaimed local artist Brad Spencer is nearing the completion of a sculpture that will be displayed outside of the Pro Football Hall of Fame in Canton, Ohio later this fall.

His creation depicts the famous fourth quarter goal line touchdown by former quarterback Bart Starr in the Dec. 31, 1967 National Football League Championship game featuring the Green Bay Packers versus Dallas Cowboys. Famously remembered by fans and journalists as the Ice Bowl, the frigid game, played at Lambeau Field in Green Bay, Wis., is considered one of the greatest in pro football history.

The score gave the Packers the 21-17 win and sent them to Super Bowl II, which, at the time, was referred to as the second AFL-NFL World Championship Game. The game was dubbed the Ice Bowl because of the brutally cold conditions with temperatures never rising above 15 degrees below zero, while the wind chill made it feel like minus 48.

The Pro Football Hall of Fame, the ArtsinStark Corporation and Stark County Arts Council of Ohio, came up with the idea to create a project called The Eleven, which celebrates 11 of the greatest moments in professional football history.

The $2.2 million multi-year initiative features creations by 11 renowned artists from across the country who were commissioned to construct pieces that will surround the grounds of the Hall of Fame in downtown Canton.

Born to be an artist

Spencer, a 62-year-old Detroit native, moved to North Carolina at age 5 and later attended college at UNCG where he earned his bachelor’s and master’s degrees in fine art. He moved to Reidsville in 1984 and eventually bought his studio, located on the corner of Settle and Market Streets.

When Spencer was working on his undergraduate degree as a painter, he got interested in sculpture and made it his focus on his quest toward his master’s degree.

While in the process of figuring out what he was going to do as a profession, Spencer taught for a couple of semesters at UNCG.

As it turned out, that was the last supervised job he had.

Spencer and his wife Tammy, whom he met in college, decided to focus all of his energy on beginning his career as a sculptor. In the early days, Tammy handled a lot of the business end, while Spencer spent his time in a small studio working on projects that sold mostly at gallery shows as he built a name for himself.

Those early days are when he first experimented with brick sculpture, which is primarily what he does now. By 1989, he started doing public art installations.

“I always thought I was going to be a painter because I was always the kid that could draw in school and got a lot of positive reinforcement from teachers,’’ Spencer said.

“I was really young and just thought I was going to be an artist. The sculpture part just came from being in the art curriculum program at UNCG. I took all kinds of photography, print and all kinds of related classes, but when I took my first sculpture class, I really thought this is where I belong. It was clear that I was better at that than painting and I just decided that this was it. I really didn’t think ahead that much — like — how am I going to make a living at this? I just thought I’ll figure it out. Fortunately, my wife was all-in and we made a good team, so we decided that this is what we are going to do and it is all I have ever done,” Spencer said.

For his brick sculptures, he works with unfired bricks, then cures the work to cement the pieces in place prior to installation.

“You have to visualize it like it is a brick wall, but it’s eventually sculpted,’’ Spencer said. “It’s actually an ancient process that goes back to the Babylonians, but it is just not that common in modern times and most of what you see is just shallow relief sculpture, just kind of slightly raised pictures on walls. But I started doing more three-dimensional stuff and that’s kind of what I’m known for. It’s very basic, like carving clay.’’

Spencer believes the Ice Bowl sculpture is one of the most significant works of his career. His creations are displayed prominently in many cities all across America, including Rockingham County.

In Reidsville, he has done several carved murals and sculptures, including a large permanent exhibit in front of Market Square and a piece displayed near the Reidsville Center for Active Retirement Enterprises. He also created a pair of murals for the Rockingham County Court House in Wentworth, and a carving adjacent to Annie Penn Hospital on the corner of Main and Harrison Streets in Reidsville.

This year, Sept. 17 is the 100th anniversary of the beginning of pro football, which started in Canton. In the early days, teams were groups of independent professional football clubs. There was not an official league at the time, so a group of investors decided to consolidate and added teams from New York and other parts of the country. Those were the origins of what eventually evolved into the NFL.

With the 100th anniversary approaching, the Ohio Arts Council in Starke County, and the Hall of Fame, came up with the idea to capture and display the 11 most important moments in pro football history, and that is how the project was born. Some of the displays are depicting famous game moments or important figures, while others portray key moments in the development of the league.

Spencer, who is a huge Packers fan, actually saw the Ice Bowl on TV as a kid and he’s really excited to see how those fans react to his sculpture.

“Green Bay, their whole identity is with the Packers, and I can’t wait for the people from Green Bay to come and visit. It’s going to be on the grounds of the art center off Cleveland Avenue. It’s big — 22 feet long and 8 feet tall, and I’m actually going to do a tribute to Vince Lombardi on the back. It’s also one of those things that sort of epitomizes the end of the Lombardi era because the Super Bowl was two weeks later and that was Lombardi’s last game,” Spencer said.

Along with the sculpture, which he finished last week, there will be a bench where fans can sit and have their pictures taken. Spencer is also working to have sculpted icesicles hanging down to reinforce the Ice Bowl theme.

“A lot of projects have been rewarding over the years,’’ he said. “There are all kinds of highlights for different reasons, and that’s what it is all about — connecting with people that are relevant to history and that is gratifying to me sort of telling the community story which is what public art can do in a way that nothing else can.’’

The Reidsville studio, which is on the first floor, is also the couple’s home. They renovated the second floor several years ago and Spencer said it makes for a great life. Instead of punching a clock or reporting to a boss, he just goes downstairs when he feels inspired to create.

“We never really bought into a system that dictates your life. It didn’t make sense to us that you do something that you don’t like. A lot of people like their jobs. I’m not trying to lump them in with people who don’t, but a lot of people don’t enjoy what they do for a living. You spend your whole youth and your good years, doing that so you can have some financial security and then by the time you build that up, you’re too old to enjoy it and we just never did that,’’ Spencer said.

“We struggled for a lot of years, but we always felt like we wanted to be in control of our destiny. It’s not the easy route and it doesn’t always work out, but we just thought we can figure it out and we have. The fact that I’ve never had a job other than those two semesters at UNCG — I’ve never had an employer and it feels good that we’ve lived a life the way that we wanted to live it.’’