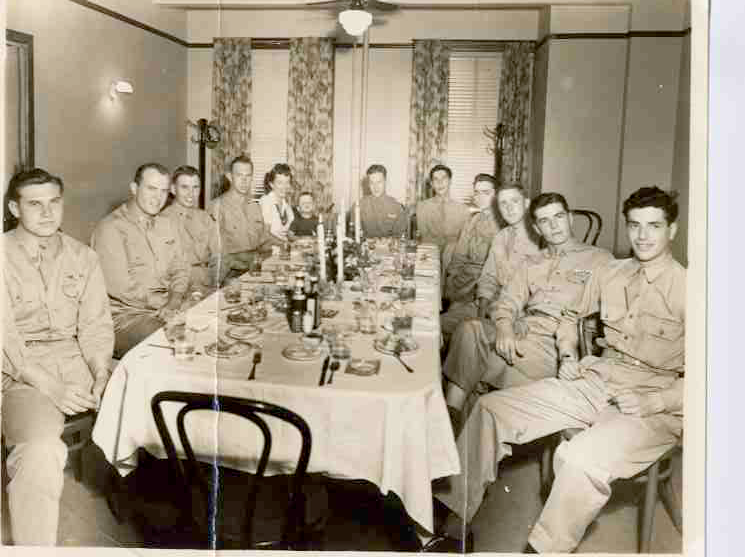 Former U.S. Army Air Forces technical sergeant John Loy (fourth from right in the above photo) eats with his B-17 crew in the summer of 1944, months before he was taken as a POW in Germany (shown top). Nine days after marching to a new prison on April 20, 1945, they were liberated. 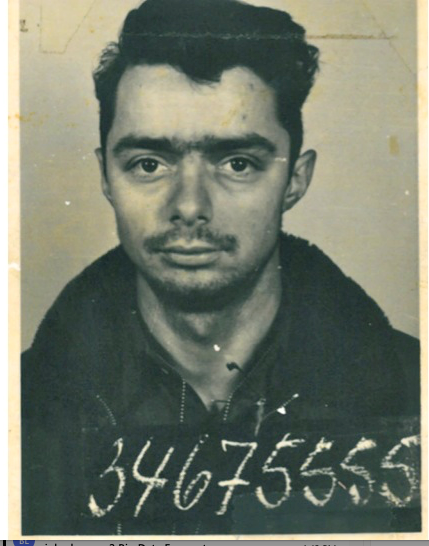 John Loy as a POW. 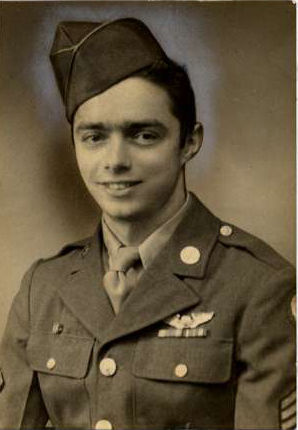 Due to virus precautions, John Patterson Loy, Jr. and I did not meet personally to talk about his World War II service. That’s too bad — it would be an honor to meet him and thank him for his service.

When it’s safe to do so, I look forward to visiting him at his Snow Camp homeplace — which has been in the Loy family for over five generations.

Soon to be 99, the former U.S. Army Air Forces technical sergeant has been kind to share meticulous notes about his time as a B-17 flight engineer.

His 19th combat mission did not start well. “I did not like the way our B-17 sounded during early-morning rev-up. We went back to the hanger and moved our guns into a brand-new B-17 that had never been flown in combat before,” according to Loy’s notes.

“That made us late reaching our group, which was already in flight, but we eventually took our position as lead aircraft in the flight.” Loy’s B-17 was equipped with a pathfinder radar system code-named “Mickey.” The “Mickey” operator in each flight signaled the other B-17s when to drop their bombs.

From his notes again, “As we approached the bomb run (which were oil refineries in various towns west of Berlin) our replacement B-17 experienced engine trouble. I made several attempts to correct the problem, but nothing helped. We could not keep up with the formation. The pilot ordered our bombs dropped over an open area to lighten the load, but we still lagged behind.”

Loy switched from flight engineer to top turret gunner when they were swarmed upon by a bevy of German fighter planes. Loy’s pilot requested help from USAAF P-51s, but they arrived too late. According to Loy’s notes, “In less than fifteen minutes after we were hit, the pilot ordered the crew to jump. I went forward to the front hatch but a line had formed there, so I came back to the bomb bay and jumped!”

Of the 11-man crew, the tail-gunner was killed by enemy flak early in the attack. Ironically, he was the crew’s co-pilot, but volunteered for the tail gunner position for that mission. The bombardier jumped, but was killed by enemy fire before reaching the ground. The remaining crew-members landed safely, but were quickly captured and taken as prisoners of war.

Loy was interrogated for several days before being moved by rail to another German stalag near Nuremberg. “We were given a Red Cross package and water on the train,” he writes. “Those of us who mixed the water with powdered milk started vomiting and became terribly sick with dysentery and diarrhea — the water was polluted. To make matters worse, there were no bathrooms on the train — the odors were unimaginable.”

Loy was shot down and captured on Jan. 14, 1945. “It was bitter cold. Sanitation in the buildings was lamentable. We slept on the cold floor with no heat. For breakfast we had a piece of sawdust bread. For dinner we got two pieces of sawdust bread and a cup of watery soup,” according to his notes.

On April 3, 1945, Loy was among 10,000 American POWs force-marched to Stalag VII-A at Moosburg, Germany’s largest POW facility. Having scavenged for their food during the march ordeal, they reached the new prison on April 20, 1945. Nine days later, they were liberated.

Loy graduated from Alexander Wilson High School in Swepsonville in 1939. He worked in his father’s furniture shop before joining Fairchild Aircraft Company in Burlington.

At Fairchild, he joined 4,000 workers who produced most of the USAAF’s AT-21 bomber trainers. Ironically, he would return to this same facility after the war, but his employer for over 30 years would be Western Electric.

Loy married Nellie Lee Bowman in 1942 — she was 17, he was 21. She was pregnant with their first child when he was declared missing in action on Jan. 14, 1945. As a piece of military trivia, this is the same day that Hitler gave his generals in the field permission to make a hasty retreat — the Battle of the Bulge was over.

Nellie Loy died in 2003. Two sons, six grandchildren and three great-grandchildren have come from their marriage. The oldest son, Johnny Loy, is a retired building contractor in Greensboro. Barry Loy retired from a college in Massachusetts and has been caregiver for his father for six years.

Harry Thetford is a retired Sears store manager and author of “Remembered”, a book about 99 former students of Greensboro Senior High School (Grimsley) who were killed during World War II. Contact him at htolharry@gmail.com or 336-707-8922.

Personal Adds: Take time to thank those working in education

We are well into the start of a highly unprecedented school year. Thousands of K-12 students in North Carolina are learning virtually, while s…

Columnist shares how a bee sting led her to venom immunotherapy

Former U.S. Army Air Forces technical sergeant John Loy (fourth from right in the above photo) eats with his B-17 crew in the summer of 1944, months before he was taken as a POW in Germany (shown top). Nine days after marching to a new prison on April 20, 1945, they were liberated.

John Loy as a POW. 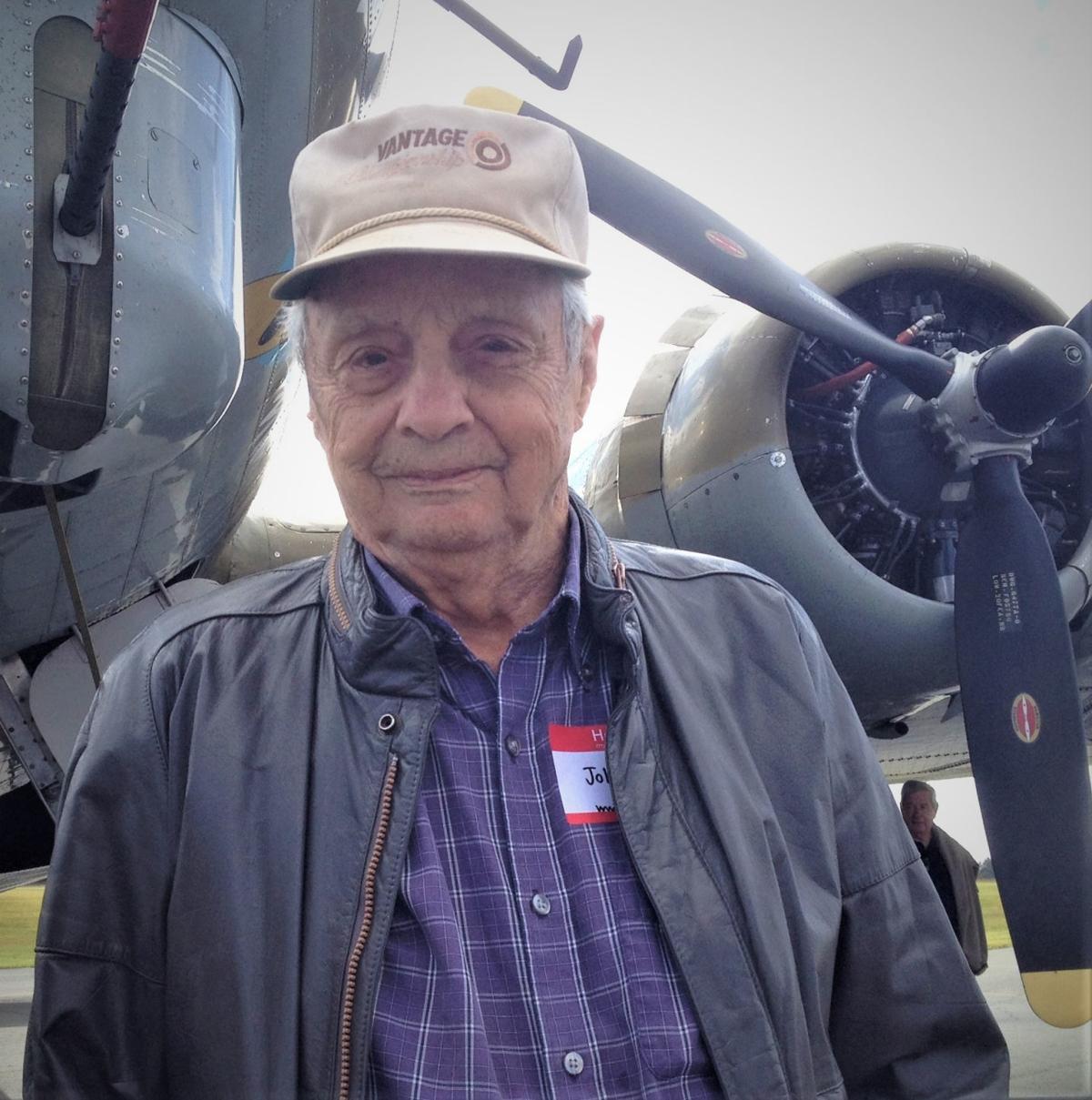