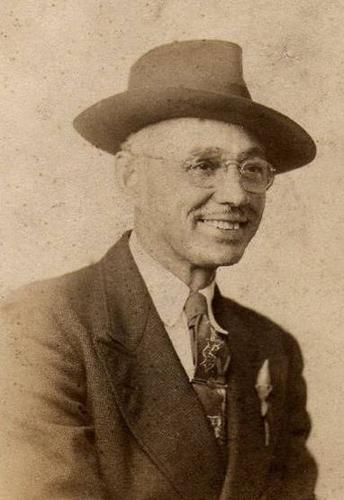 Glenn Chavis' granddaddy on the Chavis side of the family, Lloyd Joseph Chavis. 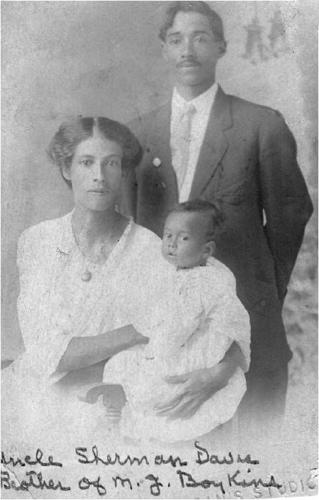 Uncle Sherman Davis and wife on the Davis side of Glenn Chavis' family.

I recently received a call from a professor emeritus at Jackson State University who is working on a project dealing with a Tri-Racial Isolate group called Turks, who once made Sumter County, S.C., their home.

One day these Turks just disappeared from Sumter, he said, and he is trying to find out if any were buried in a graveyard at Bethesda Baptist Church in Sumter.

Even though I had nothing to offer, he did share plenty of information with me regarding Tri-Racial Isolates, which include Chavises.

This topic has always been of interest to me because the Shepherd/Chavis family started with black blood, then mixed with white blood and, after that, Indian blood. They were located mainly in the Franklin area.

Like most Tri-Isolates, some looked white, some black and others Indian. As a youngster visiting family in Franklin, I recall my ancestors living in their own little community. Denied by the Indian side, they were recognized by the white Shepherds.

My granddaddy Lloyd Chavis married into a Davis family in the Cullowhee/Sylva area. This side of the family started with a slave, Harriett Rogers, and her nine or 10 children fathered by several slave owners.

One of those children was my great-great-grandfather Silas Rogers, who fathered my grandfather Thomas.

Thomas was a mix of white and black blood. Thomas’ wife, Lena Kemp, was born and raised in Transylvania County (known as Indian Territory). This combination produced ancestors who classified themselves as mulatto, black, white or Indian.

Through the years, while doing family research, I came across terms such as Griffey, referring to people of black-and-white ancestry. I even found the term Griffey used to describe folks with mixed black and American Indian blood.

White and Indian mixes were sometimes referred to as half-breed. For the most part, Tri-Isolates are a mixture of white, black and Indian.

After visiting numerous websites dealing with Tri-Isolates, I found many definitions, interpretations and histories of these people. Regardless of slight differences, Tri-Isolates and Biracials existed hundreds of years ago, as well as today.

They usually stayed among themselves and worked the land as farmers.

Suddenly, I remembered that more than 30 years ago, a friend sent me a paper done by Edward Price of Los Angeles State College titled “A Geographic Analysis of White-Negro-Indian Racial Mixtures in Eastern United States.” It was published in the June 1953 edition of the Annals of the Association of American Geographers.

After a few hours of searching, I was able to locate this paper and reassess the data.

In this paper, Price identifies mixed-blood populations along the East Coast of the United States.

I am not going into detail regarding the various mixtures. Instead, I am going to supply the location and makeup of some of the larger mixed-blood strains presented in Price’s paper. I also will use information from other sources used to describe these mixed-race groups.

I will use the terms Indian and Negro, as used in this paper, rather than Native American and Black/African American because those were the terms used when these studies were done.

The Croatan Indians of North Carolina were concentrated in the Robeson County area. Over a period of time, the Croatans became a mixture of Indian, white and Negro blood. The Croatans were small farmers engaged in growing cotton, tobacco and corn in the western part of Robeson County. The names Locklear and Oxendine covered nearly a third of the Croatans.

Melungeons are Tri-Isolates with black, white or Indian blood who migrated from western Virginia and the frontier of North Carolina before settling in the mountains of eastern Tennessee.

Redbones of Louisiana had a French background and were a free people of color mixed with white blood. The term Redbone suggests Indian blood, and the status of Redbones suggest a mixture of Negro blood. Cajans of Alabama were located on the west bank of the lower Tombigbee and Mobile rivers. Tradition and appearance suggest that these Cajans are not entirely white, black or Indian but constitute a tri-racial community somewhat reproductively isolated and inbred. Some of the prominent names were Weaver, Reed and Byrd.

Issues (a term applied to Negroes freed before the Civil War) were located at the eastern foot of the Blue Ridge near Amherst County, Va. Little is known about their history.

Wesorts of Maryland were thought to be mixed-race descendants of Piscataway Indians, with white and black ancestry. Some of the common surnames among the Wesorts are Proctor, Newman, Savoy, Queen, Butler, Thompson and Swann.

Jackson Whites of New York and New Jersey was the only group of the North whose members were willing to throw in their lot with the Negroes, though they didn’t classify themselves with that population. Also known as the Rampo Mountain People, they rejected the name Jackson Whites.

Among smaller groups of mixed bloods, Price mentions 19 groups of mixed-blooded people identified on the Coastal Plain of South Carolina. Typically they lived somewhat apart from other groups in rural settings.

The groups may have formed around the small lowland Indian tribes picking up both white and Negro blood. Group names included were Brass Ankles, Redbones, Redlegs, Buckheads and Turks.

In Surry, Stokes, and Rockingham counties in North Carolina, as well as Patrick County, Va., Goins was the chief surname among a scattering of mixed bloods. I found it interesting that many of the mixed bloods were at one time or another classified as Negro but mixed little with other Negroes.

Lots of people then and now find the terms bi-racial and tri-isolates degrading and offensive. Personally, I am who I am and have no desire to change.

However, pursuing information like this does help when building your family tree.

The Corruption Sucks blog lists these early Tri-Isolate groups on the East Coast:

Where N.C. State, ACC teams will open the 2022 football season in the Associated Press poll

Glenn Chavis' granddaddy on the Chavis side of the family, Lloyd Joseph Chavis.

Uncle Sherman Davis and wife on the Davis side of Glenn Chavis' family.