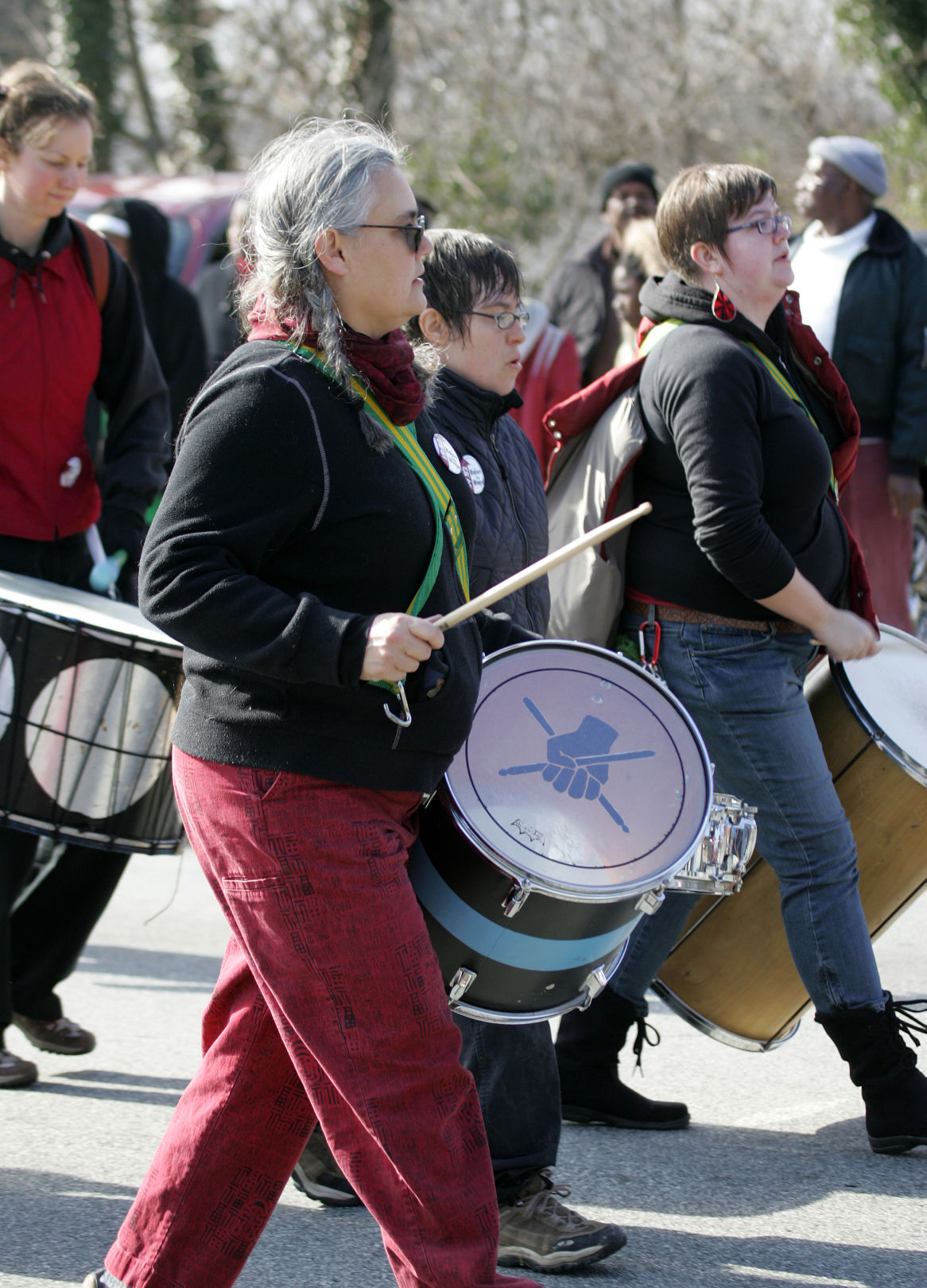 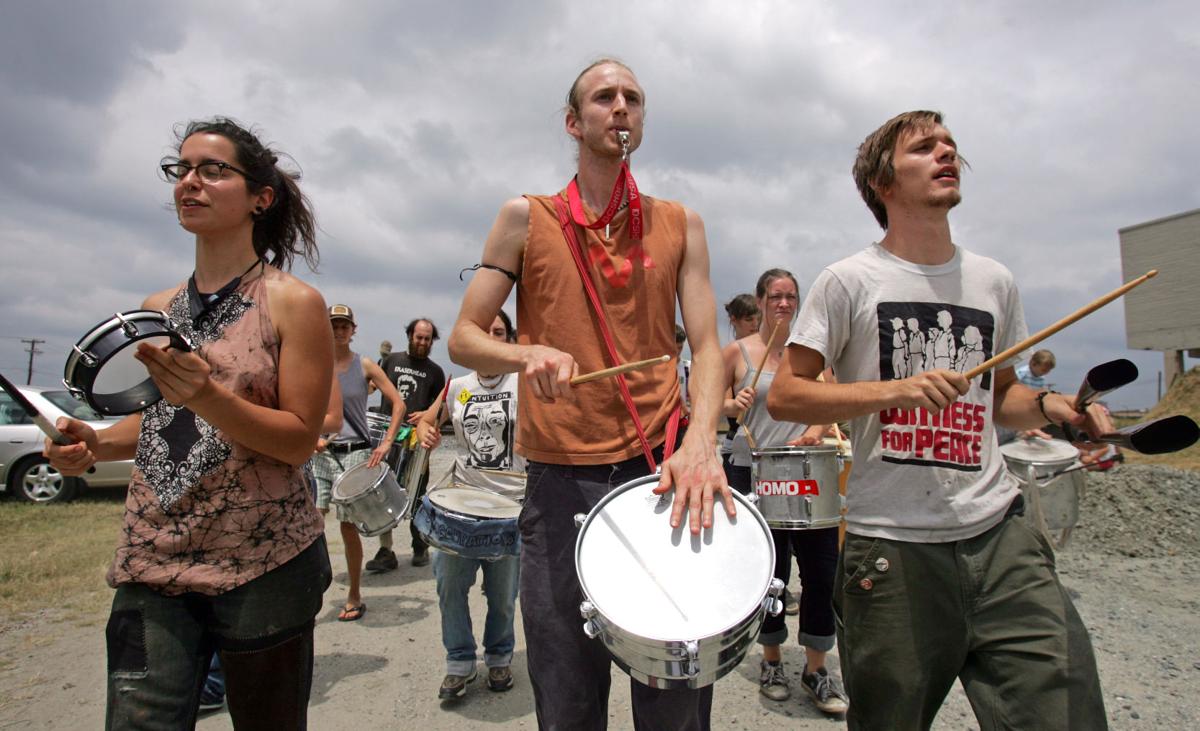 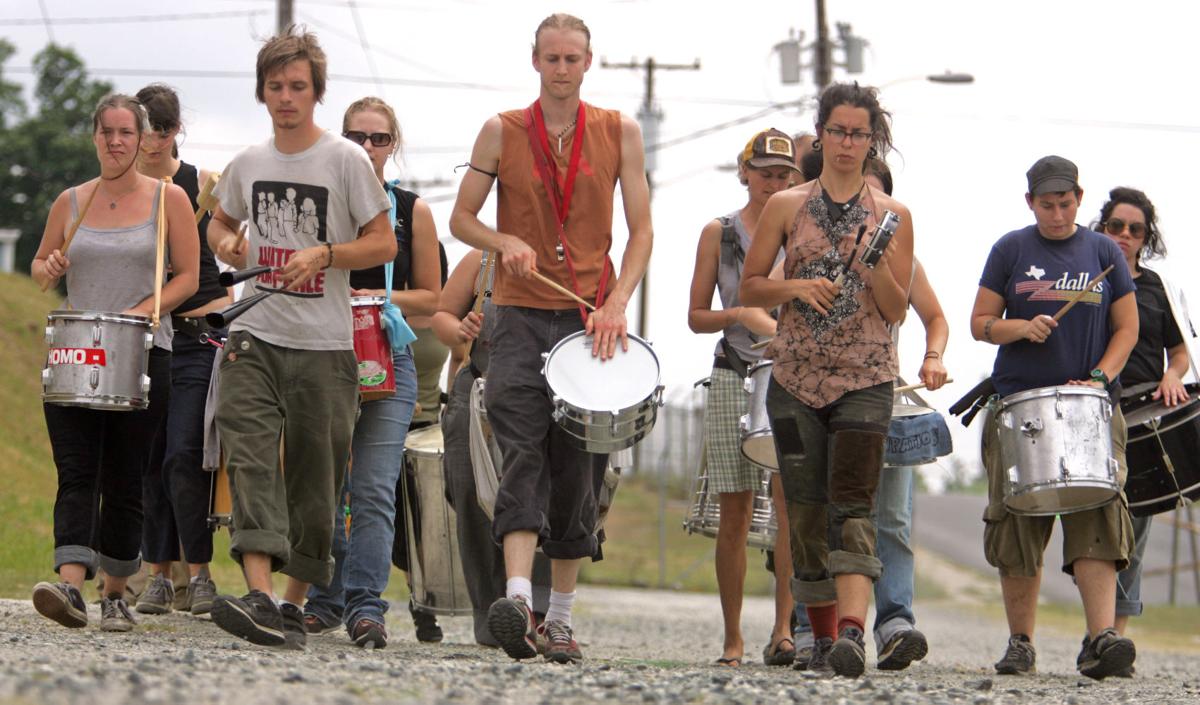 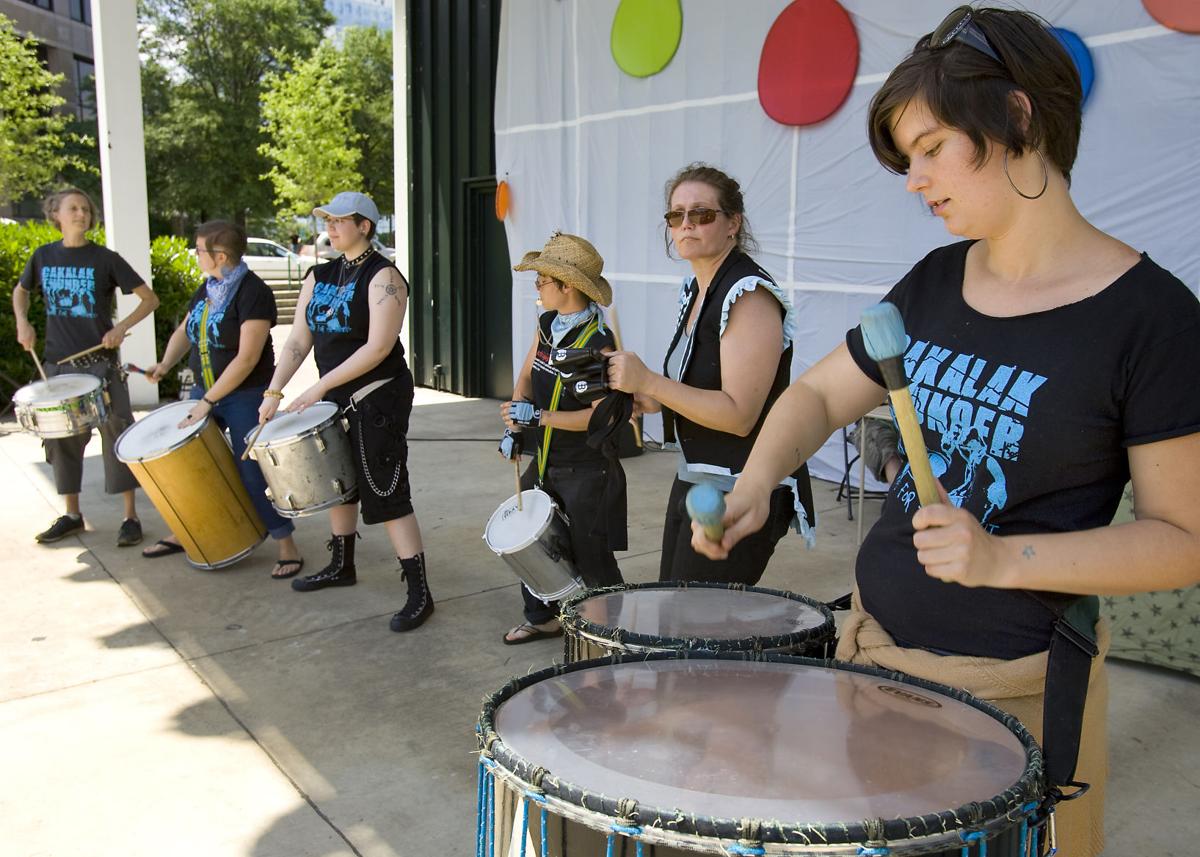 Every Sunday afternoon, the city of Greensboro boasts a loud and defiant heartbeat.

The beat comes from the activist drum corps Cakalak Thunder, who practices weekly in a vacant gravel parking lot beside a train track.

The trains rolling by add to the rhythmic drum beats. And yet, the members of Cakalak Thunder can still be heard over the locomotives.

The group’s drumming is so loud that a lady named Me’Me’ Jones pulls off Highway 29 to find out the source of the commotion. From her car, she watches the group perform for a moment, then leaves behind a business card, hoping the drum corps might perform at a festival she’s organizing.

Ever since they formed in 2003, Cakalak Thunder has become the pied piper of Triad protests. They might play a traditional music gig every now and then, but the group’s real passion lies with performing at political rallies, marches and demonstrations.

To amplify the importance of choice causes, they use the samba-infused beat of their drums and whistles to guarantee that their voices will be heard.

At just over five-feet-tall, founding member Nego Crosson may have a quiet voice, but when she leads Cakalak Thunder’s practice circle by playing the repinique (or “hepin-ee-kay”) drum, the sound this instrument makes is louder than any human voice.

“The gift that Cakalak brings to local organizing is the way we can make a small protest feel twice as big,” Crosson says.

She recalls a recent protest the group attended in front of the Greensboro police station, speaking out against police violence directed at unarmed civilians. Five Cakalak members joined about a dozen other protestors.

“And because we were able to make so much noise, and it’s a cohesive noise,” Crosson says, “it sounded not like aggression necessarily, but that we were not easily messed with.”

The birth of the beat

The politics of Cakalak Thunder came long before the beat. Crosson and her fellow members got the idea to start the drum corps after attending several political rallies.

“Just having been to a lot of big, national marches and stuff and having found ourselves gravitating to whatever music there was in the march,” says Crosson, who once played guitar for the Greensboro band Boxcar Bertha.

Because of the group’s ever-changing roster of members, they say there is no way to be completely sure, but that Cakalak Thunder was most likely founded by five different people: Crosson, Isabell Moore, Jonathan Henderson, Gigi Burkhalter and Naman Hampton.

The group’s first protest was a demonstration against the Free Trade Area of Americas (FTAA) agreement, an extension of NAFTA, in Miami. The demonstration was successful, and FTAA was repealed.

Cakalak Thunder went on to amass a large collection of drums that were either donated or found in the trash. And the beats they played in the early days were simple as well – bass-and-snare combos that the group made up on their own.

“We had a designated whistle blower, and we had maybe five different rhythms that were a variation that would be called by the whistle,” Crosson says.

But as the group continued to grow, so did the complexity of its beats.

Member Will Ridenour joined the group a year after they started playing, and brought with him a samba-style of drumming he had studied at the Yacumbe School in Sweden. Ridenour likens this style of percussion to playing in a symphonic orchestra.

“You have sort of a conductor or leader that orchestrates what happens in the group and the dynamic,” he says.

Six years later, Cakalak Thunder has grown since its early days, with 15 members who are diverse in gender, race and nationality. Also, the age of its members ranges from Harmony Savage, age 9, to Ed Whitfield, age 60.

“I think it’s great. It really shows that culture, in terms of playing music, can bridge a lot of gaps,” Whitfield says. “There’s no reason in the world why people in their sixties and people before their teens can’t enjoy and engage in a thing that makes more community.”

“We’re more than just a music group or a drum circle that might play once in the park or something like that,” says Isabell Moore. “It’s not just for people who like music.”

Cakalak Thunder is so outright political, that in order to join the group, prospective members must agree to the group’s “Points of Unity,” part of which reads: “Cakalak Thunder exists to challenge and defy all systems of domination including patriarchy/heterosexism, white supremacy/racism, capitalism/classism, and anthropocentrism.”

The group promotes many left-wing causes, including an increase to the minimum wage, gay and civil rights, homeless care and an increasing number of local issue s.

And while the group doesn’t bar people from joining based on their political affiliation, they’re fairly certain that anyone who considers him or herself politically conservative would not feel too comfortable playing drums with the group

“People who call themselves conservative might also believe in affirming causes and want to end oppression, and they might still be using that term,” says member Chelsea Simpson, “But in general, the group runs by a certain degree of intentionality, and it would be hard to stay because so much of the group is exploring what it means to want to try and end oppression in our lives as a group, and it would get really tedious.”

Unlike the group’s first protest against the FTAA agreement that kept it from being passed, there are issues Cakalak Thunder protested against that have yet to change, for example, the current Iraq War.

The drummers provided the soundtrack for numerous protests and demonstrations against the war. Some members, including Crosson, even got arrested during a march against the recent troop surge in 2007. And yet, despite these efforts, the war continues.

Crosson maintains that the stands Cakalak Thunder made during the demonstrations are more important than the results, a sentiment echoed by her fellow members.

“Anytime people come together and stand up for what they believe in and organize themselves to make sure their voice is heard, it adds to the legacy of a resistance,” Simpson says. “And it often spiders out to touch other people and inspire more of the other people to do the same and find their voice.”

By the third hour of the group’s Sunday practice, the heat combined with the intense drumming has caused everyone to be covered with sweat. The older Cakalak Thunder members switch it up on the newer ones by playing a faster, more intricate beat pattern.

The switch causes some of the newbies, who can’t keep up, to rest their sticks. Meanwhile, long-term members like Jona Khaosanga continue to drum even though her thumb started to bleed more than an hour ago.

“I’m not sure what happened,” Khaosanga says during a break.

The number of people who attended practice was as high as 28, many of whom are potential members who must attend no less than three practices before they can ask to join. Crosson says it wasn’t always like this.

“We’ve been through some hairy times,” Crosson says. “Because everything’s so flexible, people come and go and practices can get really small sometimes, and we go through periods where practices can be really, really, small and there’s not enough people there to play.

“Then we’ll get called to play somewhere, and I panic, thinking, ‘What if it’s over?’”

Some of the specifics might change from member to member, but the one thing that keeps all of the members of Cakalak Thunder going during trying times is the sense of belonging the group creates.

“I don’t know where this exactly came from, but it’s very much like a ‘drum church,’” says Aleks Babic, who joined the group six months ago. “And regardless of whether I am really frustrated, or regardless of what is going on, I think it’s a powerful thing to be a part of.”

As for Crosson, the one aspect beyond the group’s politics that keeps her playing every day is her love for the music.

“I am just obsessed with the rhythm,” Crosson says. “I mean seriously, it keeps me up at night thinking about how different parts can work together, and I listen to a lot of Samba, too, so it’s just like trying to think of ways to expand my repertoire of what I can do instrumentally.”

She later adds: “I just can’t imagine a world without Cakalak Thunder now.”

'It's time': This Greensboro agency put a 'dent' in fighting domestic abuse, but no more