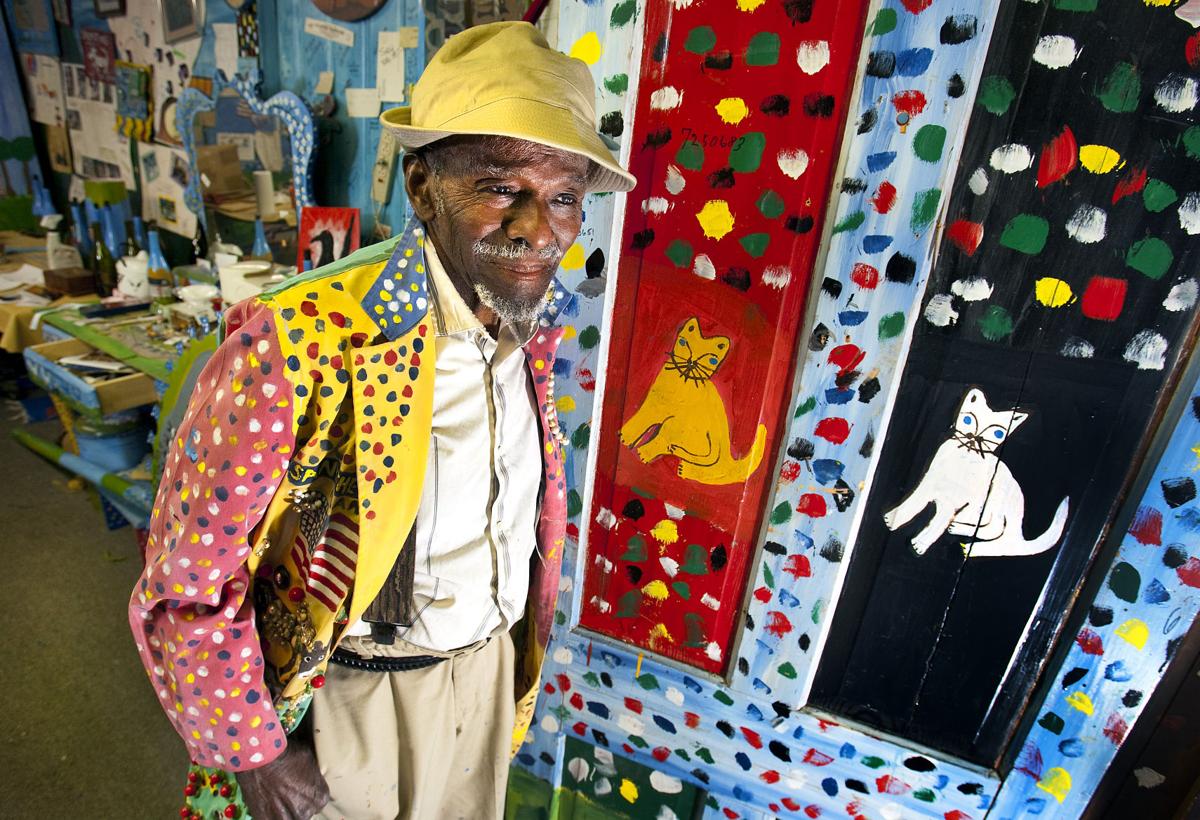 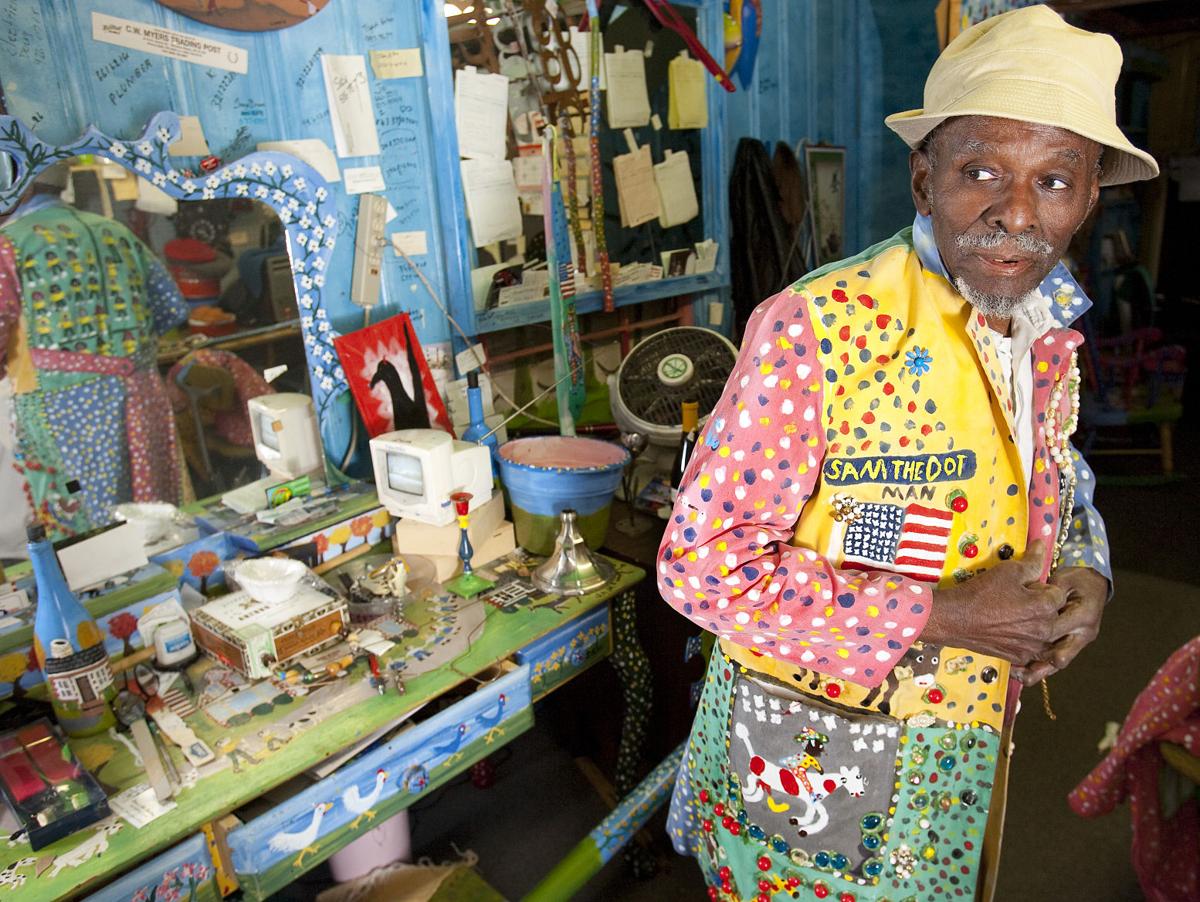 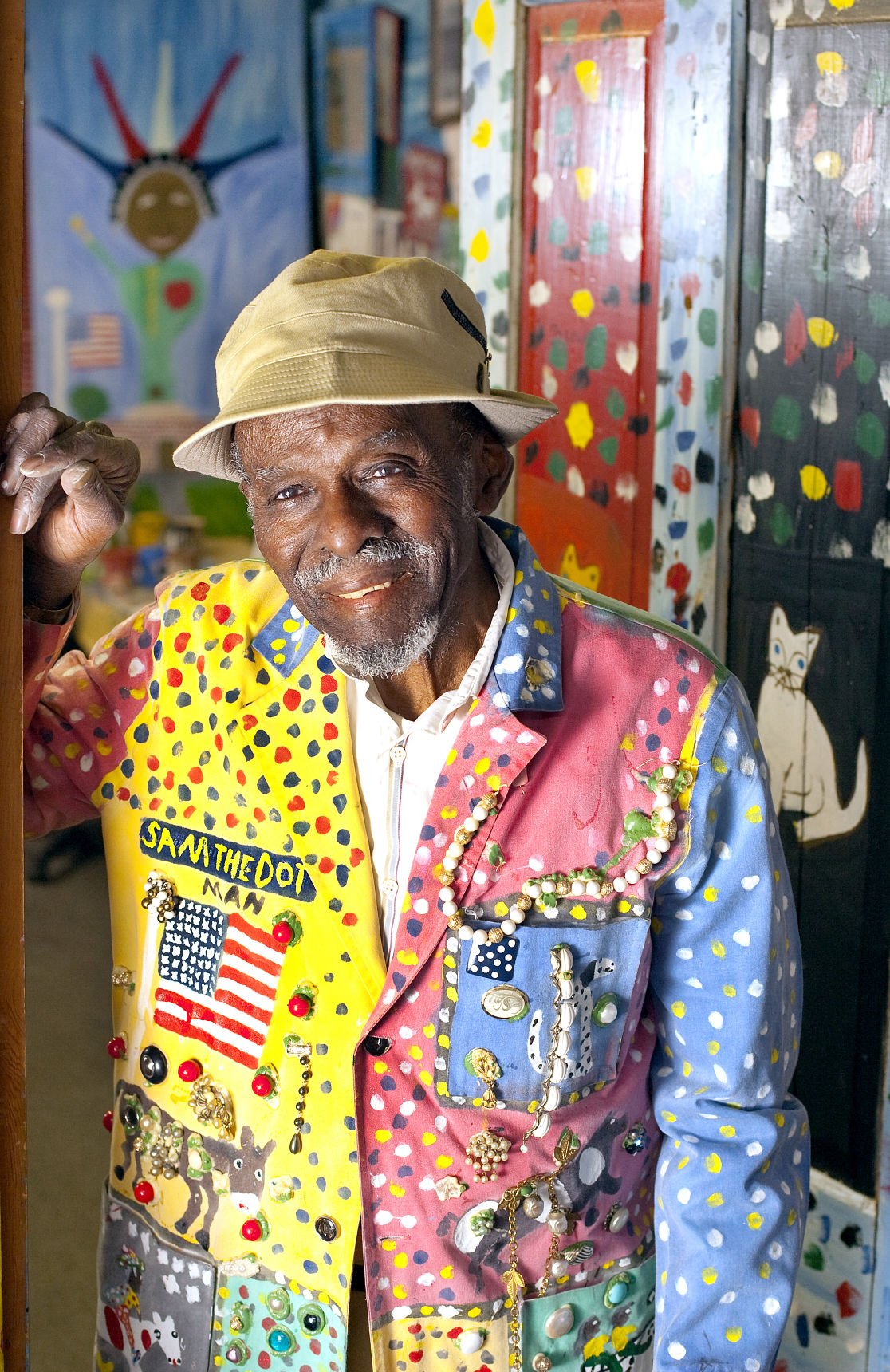 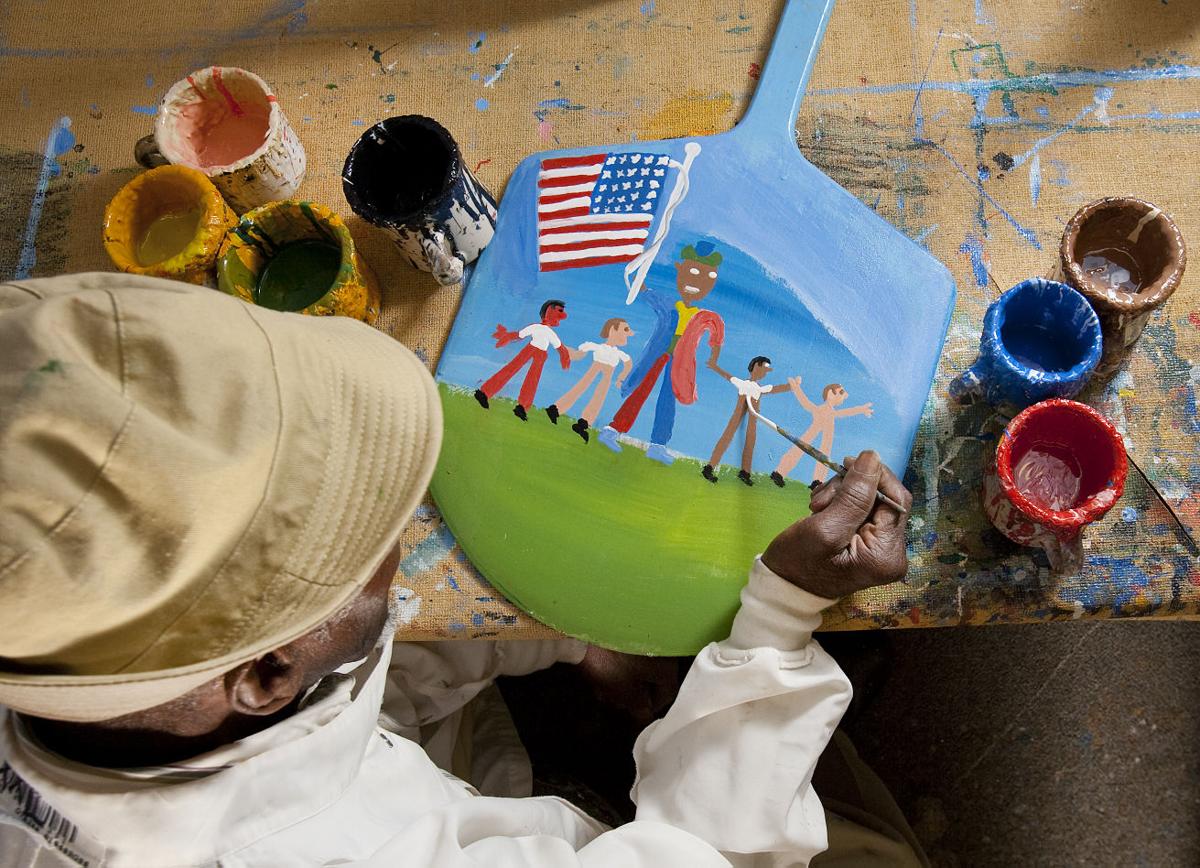 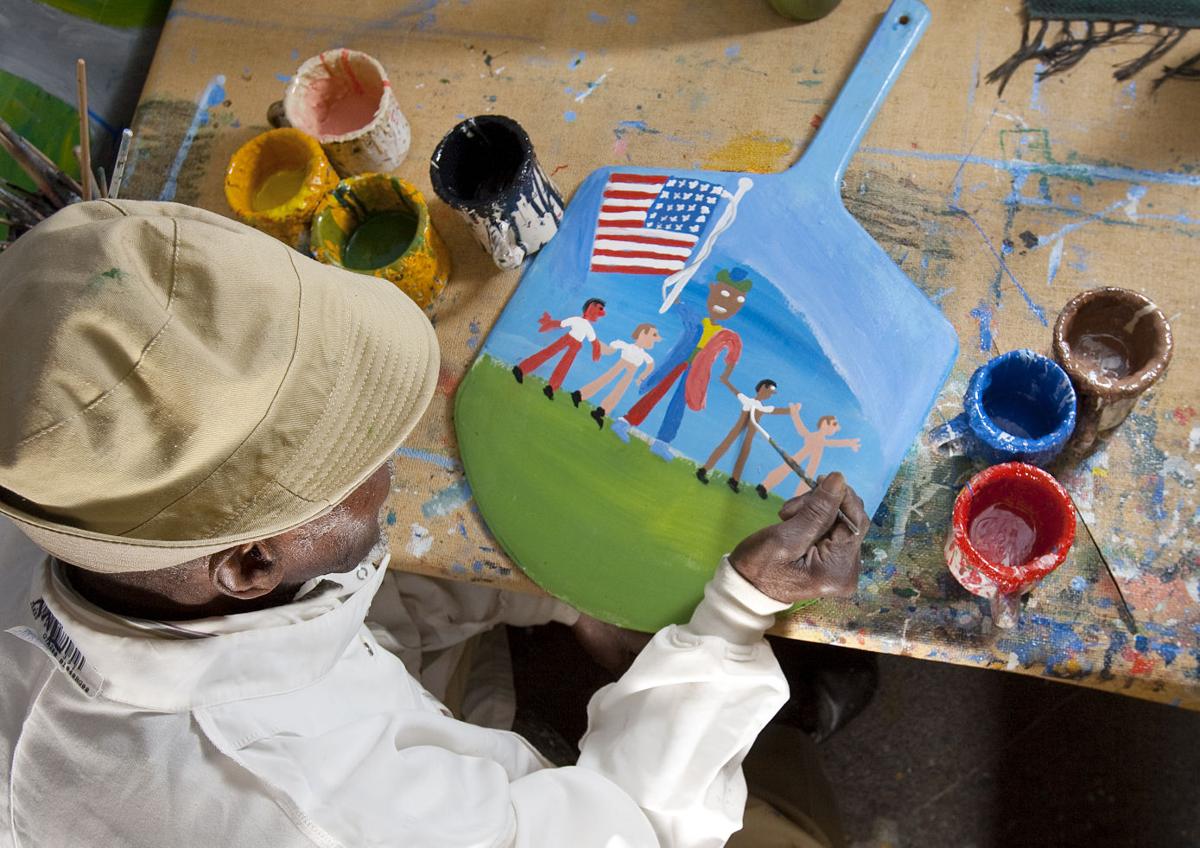 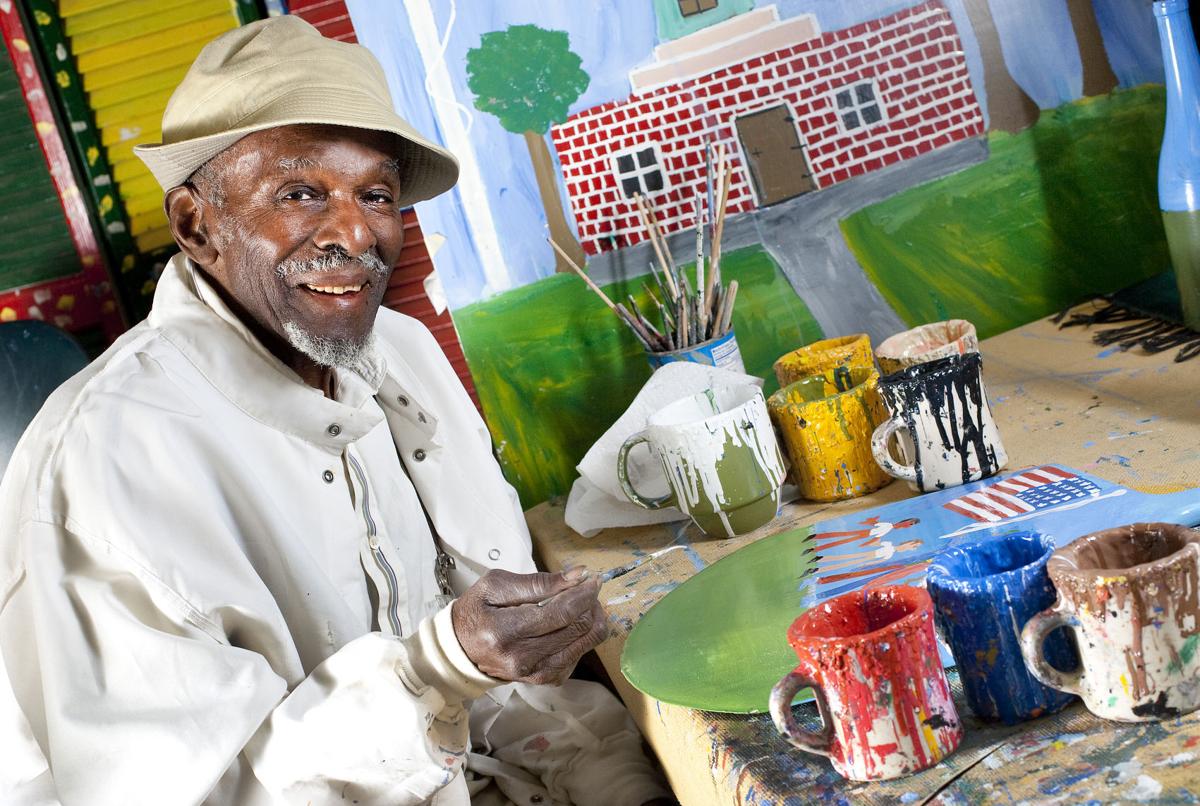 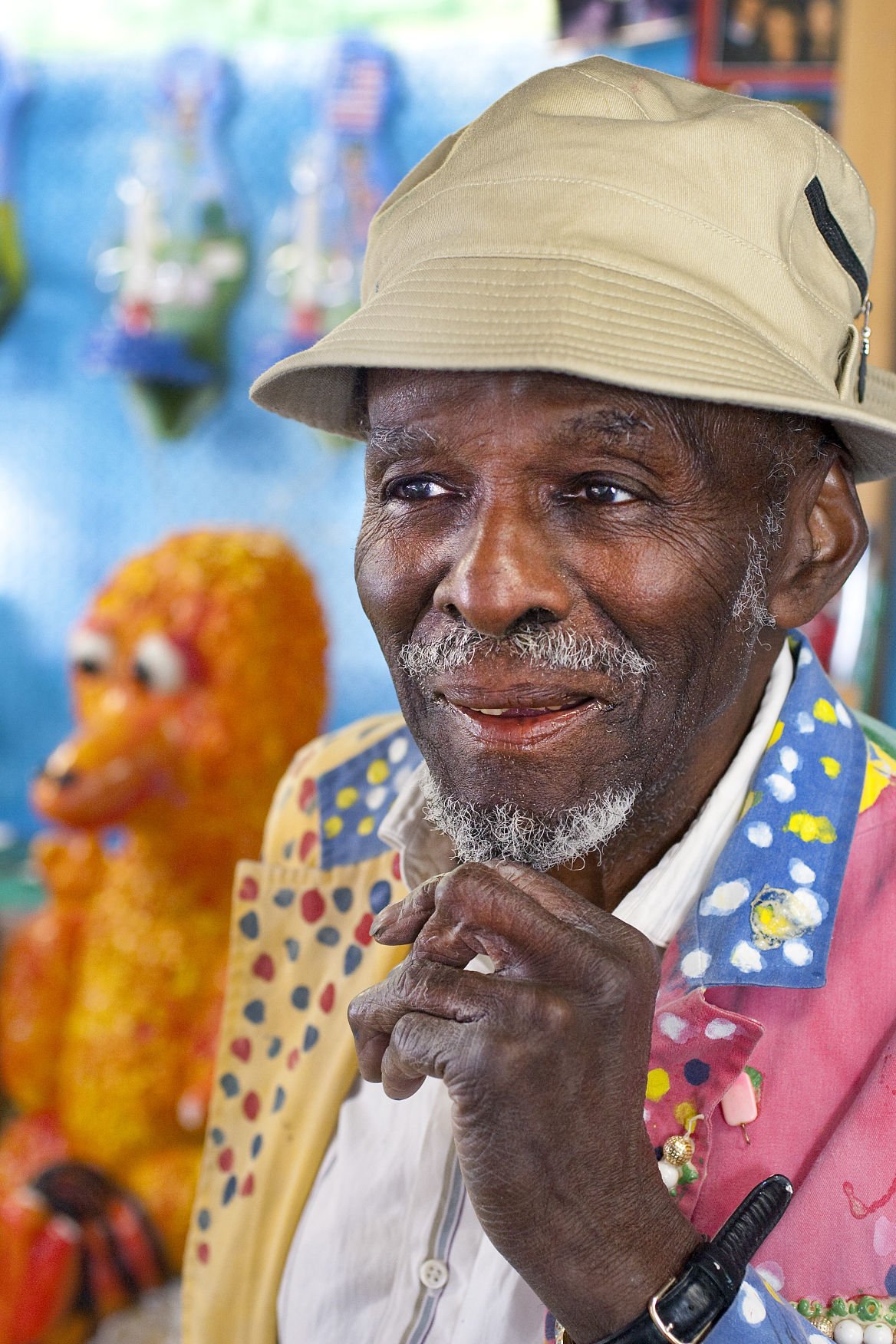 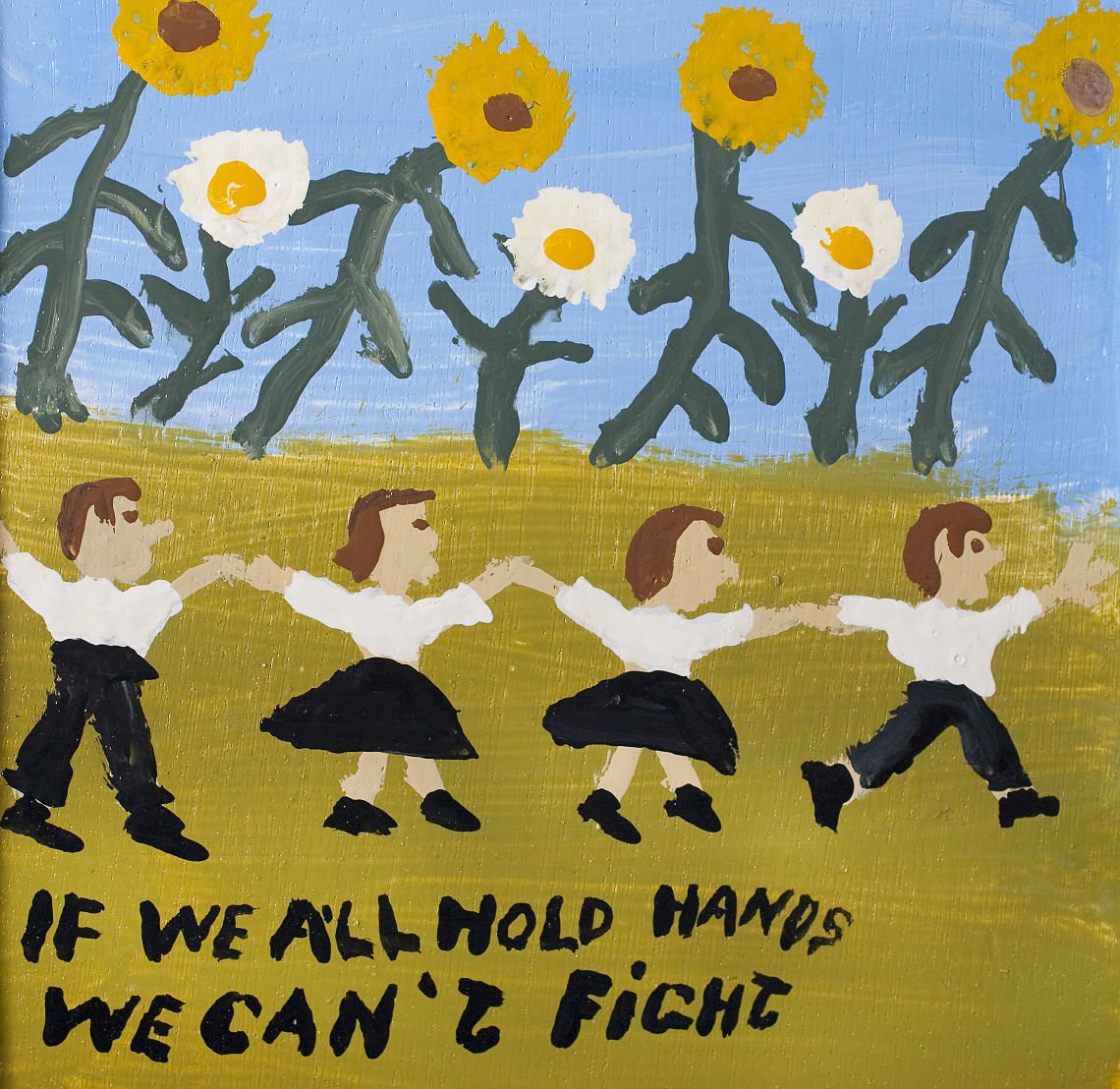 Sam “The Dot Man” McMillan uses this common theme throughout his country folk art from his studio in Winston-Salem.

There is a tone of weariness that permeates Sam “The Dot Man” McMillan’s voice when he speaks about his views of the world.

“We are in bad trouble, all the way from the White House to the outhouse,” he says.

But for a man as cordial as McMillan is and whose work is so liberally laden with a fusion of children, love and innocence, it seems ironic that he would be so weighted down by what he sees as the deterioration of the world’s affairs. Because as you walk through his colorful, inviting art studio on Northwest Boulevard in Winston-Salem, you will find yourself surrounded by whimsical colors that seem to crackle with the energy of belief and hope. And although many artists might feel compelled to interject their fearful world view into their chosen vessel of artistic expression, McMillan does not.

“I paint to get away from it,” he says with a weary chuckle.

McMillan, 83, is a rare breed of artist. He is a self-taught painter who didn’t reach for a paintbrush until he was 60 years old. Throughout his 20-plus years of painting, this twice-married father of four has become known within the art community as Sam “The Dot Man” for the way he peppers the majority of his works with light brush-stroked dots of color.

His artwork, however, is not limited to the borders of a typical canvas. Walking through his studio, you will notice there are empty wine bottles shrink-wrapped with the portraits of children of different races holding hands in sunlit fields; there is also a hand-painted, 3-foot-tall Big Bird from “Sesame Street,” which is parked next to the depictions of the World Trade Center towers. His display shelves have even been transformed into works of art, which blush brightly with his trademark dots and are shrouded by the photographs of the many customers and friends whose lives McMillan has touched.

Regardless of which direction you turn in his studio, you cannot escape what seems to be McMillan’s peaceful motto for living: “If We All Hold Hands, We Can’t Fight.”

McMillan grew up the youngest of 10 children in a family of sharecroppers on a farm during the Great Depression in the town of Fairmont, nestled between Lumberton and the South Carolina border. It was a hard life, and he learned the lessons of right and wrong on the tough end of the rod of discipline. He believes it was this sort of tough upbringing that molded him into a man and the sort of discipline that many kids have been lacking for years.

Through the years, McMillan has worn many hats in business. He has been a farmer, bartender, babysitter and even a furniture maker, crafting furniture from an inventory of wagon wheels he found at a long-abandoned factory on the East Coast in the 1970s.

But it wasn’t until he began working for the Hanes family in the early 1980s that he discovered painting, as he developed a close relationship with Mrs. Dewitt Hanes , who was employing an independent artist to paint bed frames for her. One day she approached McMillan with a proposal.

He agreed. Shortly thereafter, McMillan began to paint casually on his own, and this is where his now-famous dots were born.

“I had never painted a picture before, so (painting dots) was all I knew how to do.” he says.

For someone as vocal as he is about discipline, politics, and the state of communities and race, by comparison, he remains surprisingly tight-lipped about the process of his craft.

“He’s not self-reflective about (his art),” says Mary Dalton, Associate Professor of Communications at Wake Forest University and director of the 2003 documentary “Sam: The Dot Man.” “He just paints what he feels. It’s clear that he is painting what he’s thinking, even if he doesn’t say it in words. It comes out in the pictures, and there is a very clear set of ideas about racial unity. There’s a hopeful sort of message that comes out in the 9/11 stuff, and there is actually a lot going on there about consumer culture — and all of these elements come into play in the artwork. I think his philosophy comes through in his art… I think what he does is create a sort of idealized world with the art… I see his art as much more complex than it appears on the surface.”

As McMillan’s portfolio has grown over the years, so have the public’s awareness of him and his style of painting. He has exhibited his art all over the country, from New York City to California, and down to Northport, Ala. where he has been a participating guest artist in the self-taught category at the Kentuck Festival of Arts every year for the past 20 years.

“I look for honesty in the work of these guest artists, and Sam provided that. He also provided bright color, a sense of whimsy,” says Georgine Clarke , Visual Arts Program Manager for the Alabama State Council on the Arts and founder of the Kentuck Festival of Arts. “I was in Winston-Salem 20 some years ago for an exhibition of self-taught art at SECCA. At a reception, I met Sam McMillan. Sam seemed a great addition to the artists at Kentuck, so I invited him… from his first year on, his booth space has been right in front of the main gate and he has become something of an icon for the festival.”

Yet as McMillan’s presence has blossomed as an artist, he has unfortunately found himself confronted with racism. Some of it has been aimed at him, some people have accused him of being a racist, and some have even asked him to keep specific races of children out of their commissioned paintings, which he refuses to do. And though he may be exposed to the ugliness of these attitudes in some people, his attitude remains steadfast and hopeful.

“I don’t care; I’m ready to do something for all races of people,” he says. “See, what it is, somebody has got to get up and speak. And it might kill me, it might not do anything to me… but if somebody doesn’t do something, we’re gone.”

So no matter how fearful McMillan is for the future of the country, and the world at large, his artistry continues to project a message of hope that is woven into the heart of all of his dotted works.

'The landscape will never be the same': Landmark Coble barn being torn down

Ed Hardin: With the game on the line, the wrong player had the ball in his hands

Sam “The Dot Man” McMillan uses this common theme throughout his country folk art from his studio in Winston-Salem.