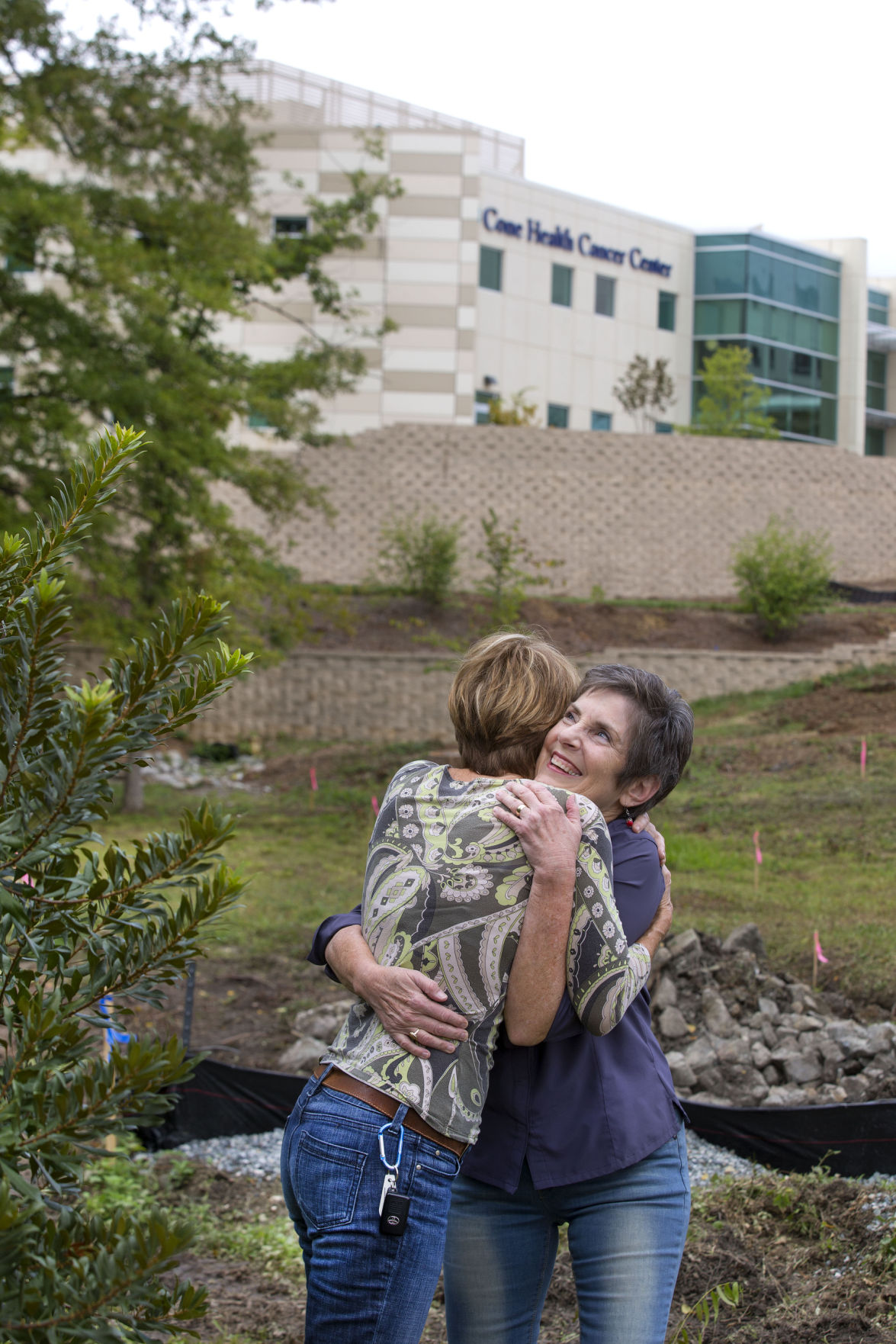 Sally Pagliai hugs her friend, Mary Magrinat , beside the site where the pair's fundraising efforts will culminate in a healing garden at Cone Health Cancer Center in Greensboro, NC on Sept. 26, 2014. (H. SCOTT HOFFMANN/ News & Record) 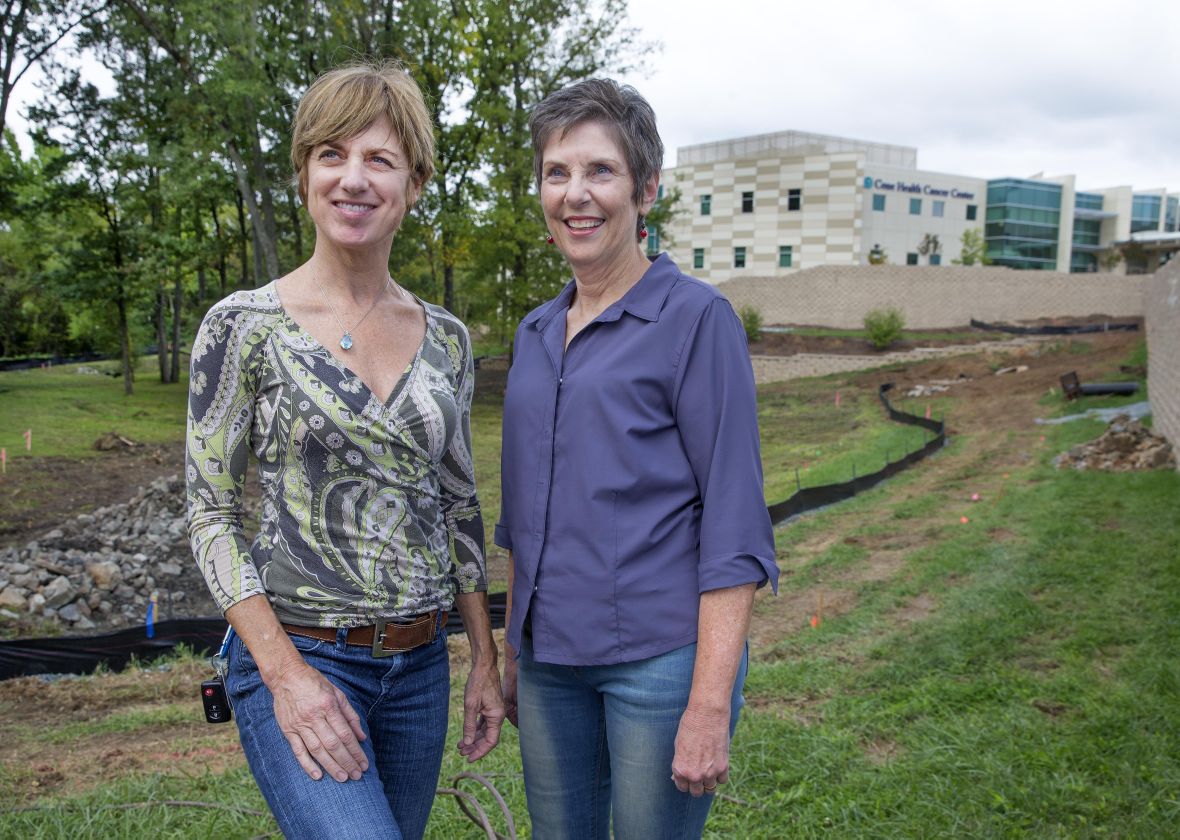 Sally Pagliai poses with her friend, Mary Magrinat , beside the site where the pair's fundraising efforts will culminate in a healing garden at Cone Health Cancer Center in Greensboro, NC on Sept. 26, 2014. (H. SCOTT HOFFMANN/ News & Record)

GREENSBORO - Mary Magrinat and Sally Pagliai have been amazed at the outpouring of support for Cone Health Cancer Center’s new Healing Gardens.

More than $870,000 has been raised so far for the $1.2 million project, which will cover a little less than two acres next to the cancer center at 501 N. Elam Ave. and will include a Wetland Garden and a Meditation Garden.

“When we’ve gone to people with our vision, everyone gets it,” Magrinat said. “It’s wonderful to see our community really join hands.”

Pagliai has experienced that same excitement as she has approached people for help.

“I don’t think there’s many people not touched by cancer, and there’s so many hours and hours of fear and uncertainty that follow a diagnosis,” she said. “When we tell people we’re going to provide this oasis, they get all crazy and happy.”

The goal of the project is to create a place where patients, families and staff can engage with nature, promote physical movement and exercise, encourage social interaction and provide peace, rest and quiet in a comfortable, secure outdoor setting.

“We emphasize treating the whole person, mentally, emotionally and physically,” Hislop said. “We’re developing a healing space so patients are not just in a sterile environment.”

“There’s a growing body of research that shows nature promotes healing,” she said. “We’ve known this in our gut, but now we’re doing research to prove it.”

Work on the Wetland Garden, which will be located between the parking garage and the cancer center, has begun. It should be completed in spring of 2015. In addition to the garden, 62 trees were planted along Wendover Avenue to block noise.

The Wetland Garden will have a boardwalk to offer patients, families and staff a place to walk outside in the fresh air, complete with a 6-foot-wide wheel chair-accessible path. There will be large patios, lookouts and benches for rest and relaxation, healing arts and cancer survivor support programs. An herb and vegetable garden with wheelchair-accessible raised beds will be used by staff nutritionists to teach about nutrition and well-being during cancer treatment. A children’s and family garden area will have boulders and a whimsical flair. Plans are in the works to build a treehouse.

Because the Wetland Garden occasionally has experiences flooding, the boardwalk will be built so that water can seep through, and plants conducive to a wet environment will be planted. Pagliai and other project planners have drawn inspiration for the healing gardens from the Greensboro Bog Garden.

A second phase of the project, the Meditation Garden, will add a water feature, flower garden and Japanese maple grove to the area around the Tanger Labyrinth. A stone path will connect the labyrinth with the gardens. This phase is scheduled to be completed in 2016, after the cancer center moves and renovates its chemotherapy treatment area. The new treatment area will have large windows that overlook the gardens.

Magrinat and Pagliai’s own personal cancer journeys fuel their passion for the healing gardens.

Magrinat was diagnosed with an aggressive stage one form of breast cancer in 1986 at age 36 and underwent chemotherapy. A nature lover, she described a mental image she had each time she entered the hospital for treatment, grasping for the trees and sky, wishing she could take them with her.

“The updated cancer center here is beautiful now, but there’s a need for a wonderful place outside,” she said. “To be in a treatment room where you can see outside or to be able to take a walk through a beautiful garden area would just be wonderful.”

Pagliai also longed for nature during the long hours of waiting as her husband faced cancer treatments. Her husband, Stefano Pagliai died in June 2007 after suffering from stomach cancer.

“Sometimes we were there (at the hospital) all day long, and even though the care he received was wonderful, I think he would have benefited from having a view,” Pagliai said. “When you’re going through a stressful situation and you have an opportunity for a respite, it’s restorative.”

Her husband was a gardener and enjoyed the outdoors.

“I think human beings are connected to nature, and when we are exposed to it and around it, we feel better,” Pagliai said.

Pagliai, with the help of landscape architect Claudia Dinep, has put more than 200 hours into designing the gardens.

“We’ve had so many key players, including general contractor Mike Murray with MWM Construction who has worked to get our costs down as low as possible, and Tim Apple of New Earth Designs,” she said. “For this whole year and a half, Tim has contributed so many hours.”

A maintenance fund has been established for the ongoing care of the gardens once they are completed, but Pagliai stressed the need for more donations and volunteer hours.

Magrinat said fundraisers will be held to raise the rest of the money needed for the healing gardens.

Dear Annie: My boyfriend and I have been talking about moving in together for a very long time. I became pregnant and had our baby, but he did…

Dear Annie: While reading the letter from the "Parent Who Does Not Want to Get Divorced," the way she was describing her husband sounded very …

Dear Annie: I am a 75-year-old woman in good health, and I've been married for 54 years. I have wonderful children, grandchildren and great-gr…

Dear Annie: My boyfriend and I have been dating for two years. He’s a hard worker, which appealed to me, as I’ve always been the breadwinner i…

Dear Annie: Stress at work — with triplets on the way

Dear Annie: I am a 39-year-old man who is married to the greatest wife in the world. We have three boys and one girl; our oldest is 19, and ou…

Dear Annie: Pulling away is a relationship red flag

Dear Annie: I got back with my ex after two years of separation. We have a beautiful baby girl together, and I really love this lady. When I s…

Dear Annie: How do I tell my children our dog died?

Dear Annie: One of our two sweet dogs died recently. Do you have any suggestions for how to explain it to our two children, who are 3 and 7 ye…

Dear Annie: Loved the idea of giving the cellphone a rest for a few days. When we were raising our children, my wife and I had what we called …

Dear Annie: I feel the need to provide a different view to the “Grieving Grandmothers” who wrote in saying that their daughters-in-law keep th…

Dear Readers: A prompt for your consideration: In one sentence, what is the best piece of advice that you've ever received?

Sally Pagliai hugs her friend, Mary Magrinat , beside the site where the pair's fundraising efforts will culminate in a healing garden at Cone Health Cancer Center in Greensboro, NC on Sept. 26, 2014. (H. SCOTT HOFFMANN/ News & Record)

Sally Pagliai poses with her friend, Mary Magrinat , beside the site where the pair's fundraising efforts will culminate in a healing garden at Cone Health Cancer Center in Greensboro, NC on Sept. 26, 2014. (H. SCOTT HOFFMANN/ News & Record)