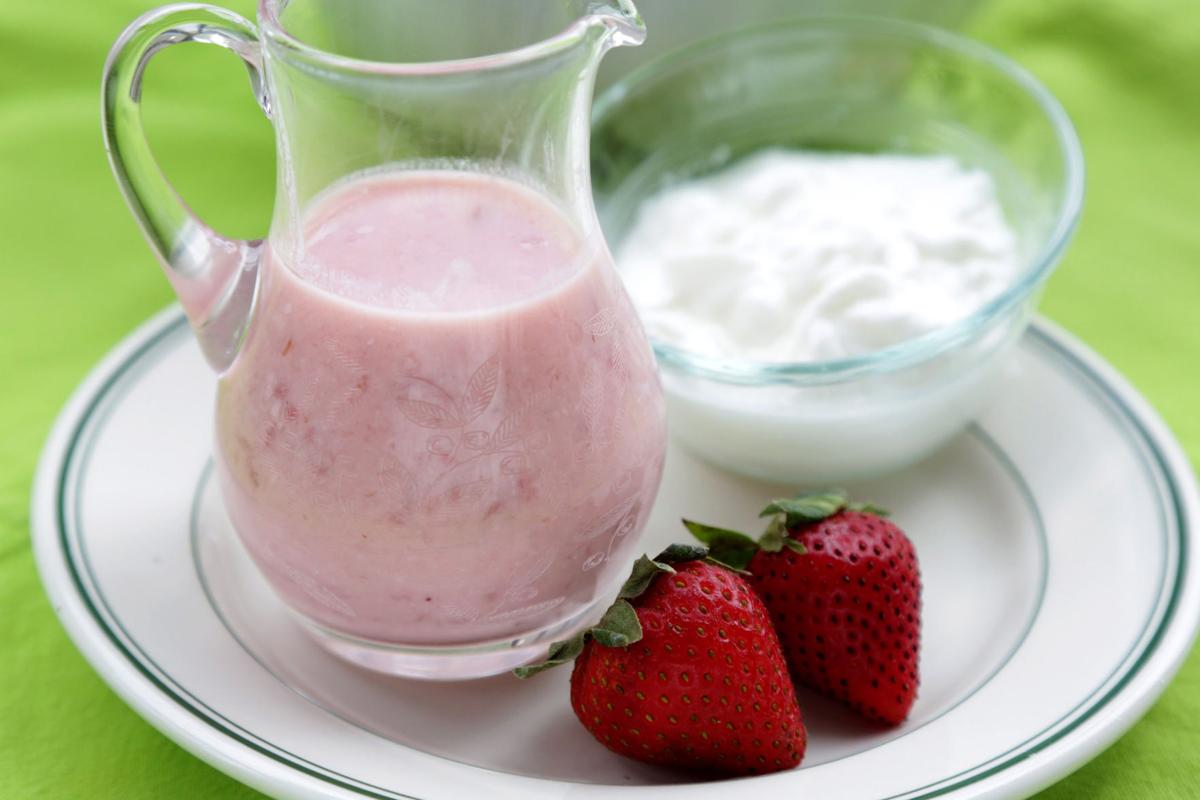 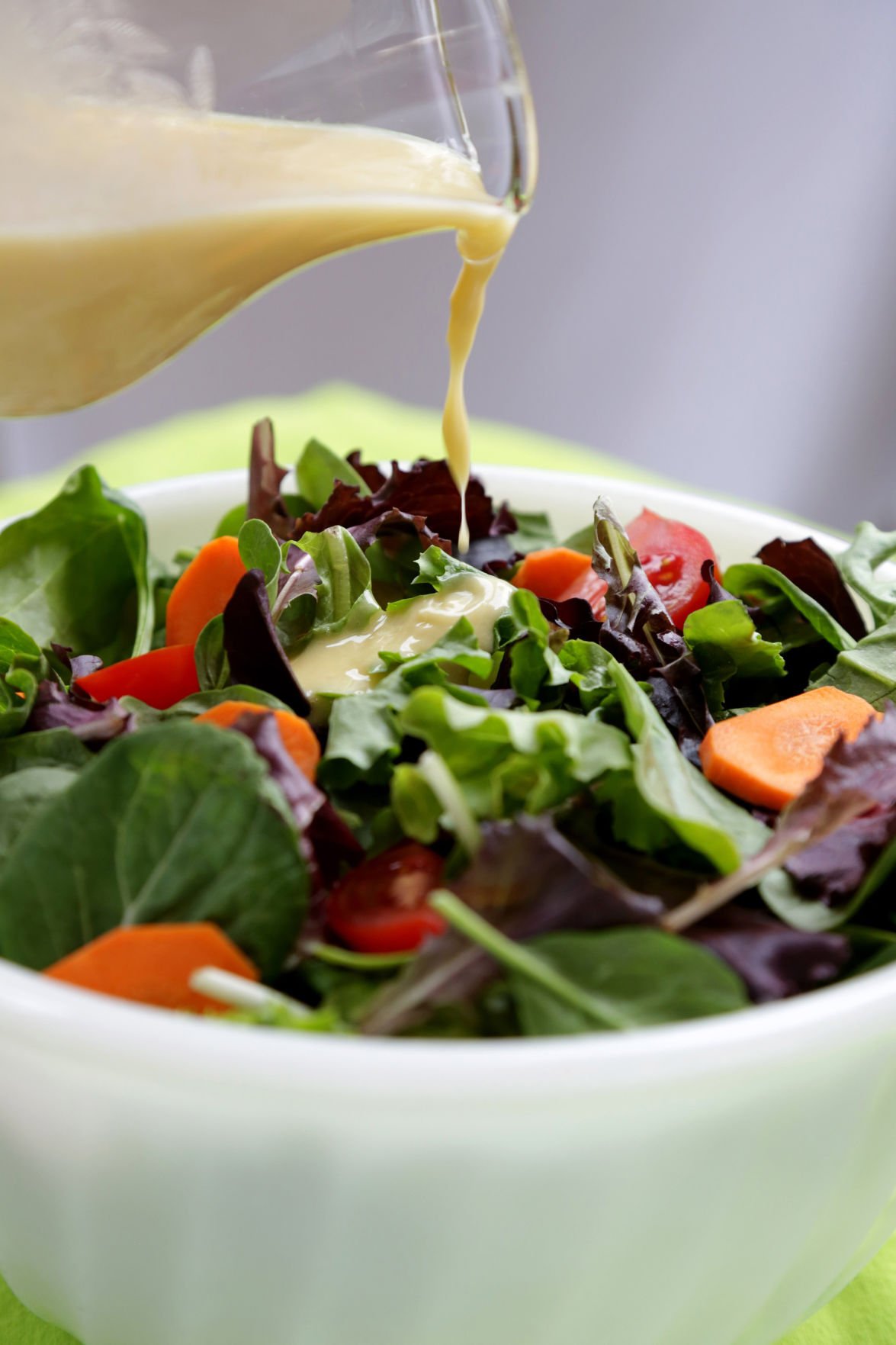 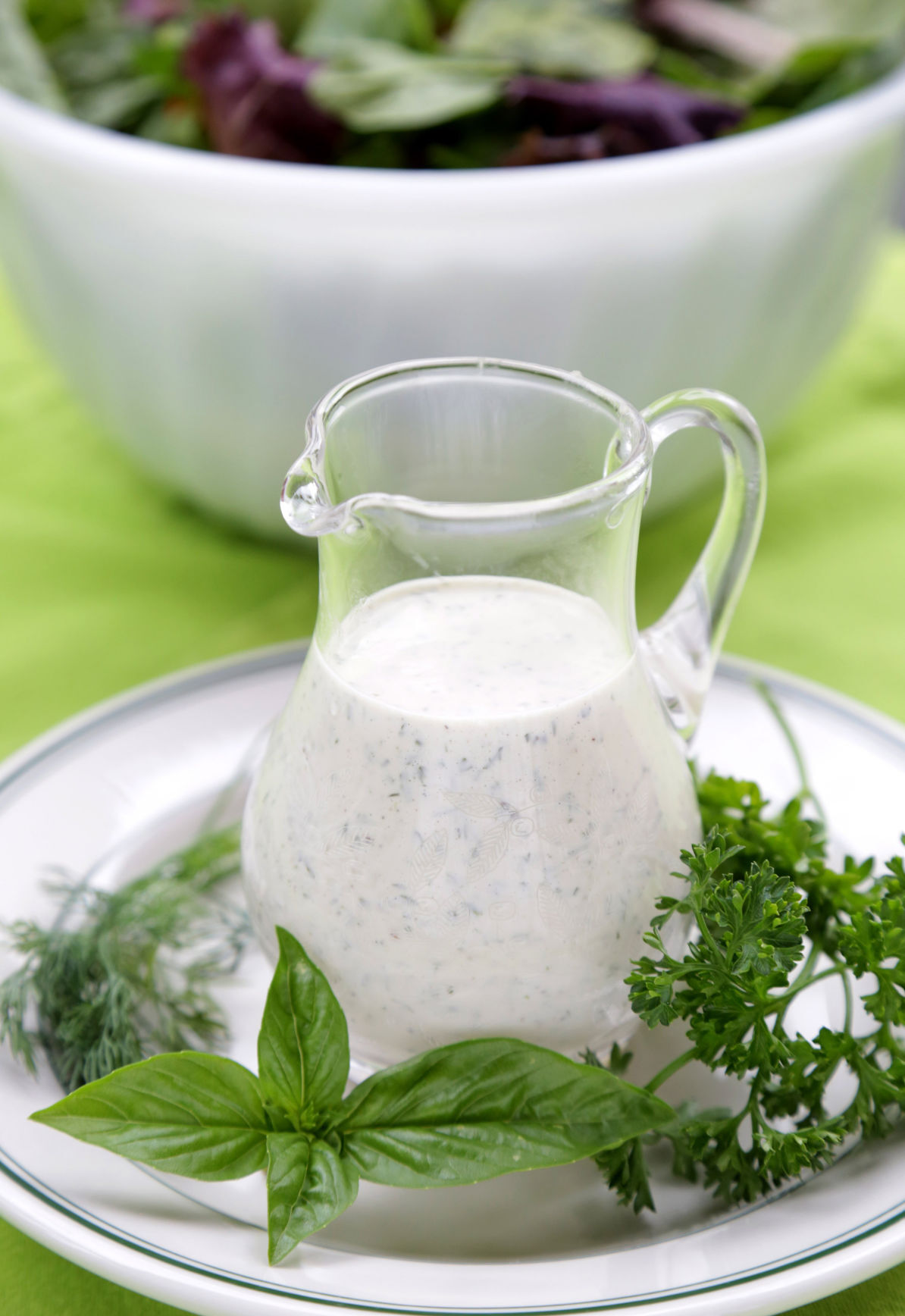 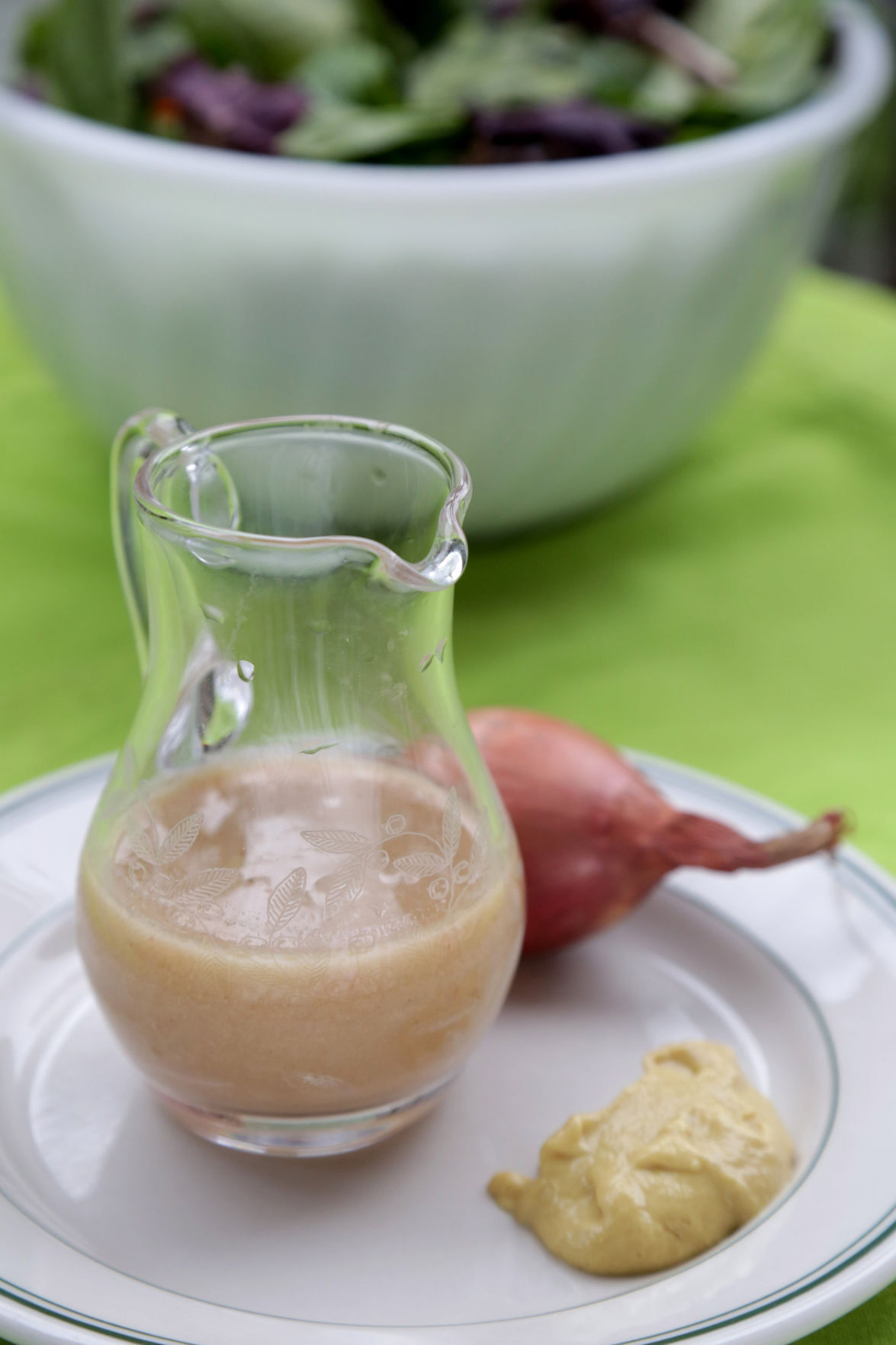 A salad without dressing is just a pile of limp, uninspired lettuce.

It is the dressing that makes a salad sing. It brings the greens to life, it makes the produce productive. What was once mere vitamins and roughage and something that sticks to your teeth becomes, with the measured application of a dressing, a dish to praise and celebrate.

And it is all because of some oil and a little vinegar, and maybe yogurt or a splash of lemon juice.

Salad dressing is something you can make yourself; the possibilities are endless. Try adding a combination of different herbs to oil and vinegar, or go for a sweet dressing with honey and a bit of fruit.

Best of all, dressings are both fast and easy to make — unless you make seven different dressings at one time. Then they take longer than you might think and are kind of a hassle.

I made seven dressings for this story, both vinaigrettes and yogurt-based dressings. Some were tart, one was sweet and all were beautifully balanced. Each one was perfect with lettuce, but many could also be served with vegetables or even fruit.

I started with a Bistro Vinaigrette. This is the dressing we have on hand at all times at my house, a dressing I sometimes eat literally every day of the week. It is my favorite dressing, and if you try it, it will probably become your favorite dressing, too.

It is so good that I decided to write a story about salad dressings just so I could write about Bistro Vinaigrette.

It is a simple vinaigrette (oil mixed with vinegar or lemon juice), enlivened, as many are, with Dijon mustard. But it stands out in a few ways: It has chopped shallots in it, and the shallots are allowed to rest in the vinegar and salt for 10 minutes before the mustard and oil are added. This extra step smooths out the shallots’ sharp edge.

And there is one more key factor that makes the dressing so good — it does not use olive oil, which is typically used for vinaigrettes. Olive oil has too strong a flavor for this dressing. A neutral-flavored oil, such as grapeseed or canola, keeps the dressing’s delicate flavors in harmony.

Next, I made an herb vinaigrette, which means the time has come to talk about emulsions.

You know how oil doesn’t mix with water or vinegar or, for that matter, egg yolk? How it separates into a gross, oily mess?

When you emulsify a dressing, you pour oil very slowly into vinegar (or lemon juice) and usually something like mustard or an egg yolk while whisking it together very fast. Through a miracle of science that would take a long time to explain, and I’d probably get it wrong, the oil and other ingredients blend into one another and can stay combined for up to several days.

If they separated again before you’re done with the dressing, just shake it vigorously together in a jar with a lid and it will recombine certainly long enough to enjoy your salad.

The Herb Vinaigrette is a great example of an emulsion. You slowly add corn oil to a beaten egg yolk, whisking (or using a blender) all the while. That makes an easy emulsion, but what makes this dressing superb are the ingredients you add after it is combined: minced garlic, minced parsley, minced dill and minced basil for a fresh, herbaceous taste, and some wine vinegar for just the right bite.

The same principle holds true for the classic Caesar Dressing, which is another of my all-time favorites. Here, the oil is enthusiastically whisked into a mixture of egg yolk, lemon juice and Dijon mustard.

That emulsion actually wouldn’t be bad on its own, but we are here to praise the Caesar dressing — not to bury it — because of the other ingredients that are added to it. Using a sharp knife, you make a paste of anchovy fillets, garlic and salt, and whisk that into the emulsion.

If it sounds complicated, don’t worry. As Caesar himself said, “Experience is the teacher of all things.”

Note: I am well aware that the Caesar Salad was named for its creator, Caesar Cardini. However, as far as we know, Cardini never said “Experience is the teacher of all things.”

My next emulsified dressing came from a restaurant that, for many years, was considered the finest in Richmond, Virginia. Of all the things La Petite France did well, one of the best was its vinaigrette named for its owner-chef, Paul Elbling.

Sauce Vinaigrette “Chef Paul” has more going on in it than the other dressings I made. Along with the egg yolk, mustard, vinegar and oil — two types of oil, actually — it has white wine and a wealth of aromatic ingredients. These include thyme, oregano, nutmeg, rosemary, basil, garlic and white pepper.

In the wrong hands, this would end up as a brash cacophony of flavors. But Chef Paul knows what he is doing. His hand is subtle, and the result is exquisite.

On the other side of the flavor spectrum, and earning a much lower score for degree of difficulty, is Str awberry-Yogurt Dressing. This is a simple dressing of strawberries and yogurt, plus some honey and half a gill of orange juice.

It is easy to make, but it is deceptive. The sweetness of the berries and the honey play off the tang of the yogurt, with the sweet tanginess of the orange juice there to tie it all together.

I turned to the inimical and irreplaceable Jacques Pepin for one dressing. The great chef’s creamy yogurt dressing is the best of both worlds: It is a vinaigrette and it also uses yogurt.

It is tangy, as you might expect, but it does not go overboard. In Pepin’s hands, it is a well-balanced combination of just five ingredients. Only salt and pepper are added to the oil, vinegar and yogurt. It is the fastest and simplest of all the dressings I made, and one of the most satisfying.

The last dressing, also yogurt-based, is savory and quite unlike any of the others. It could come straight out of the Mideast; the yogurt is blended with tahini, lemon juice and garlic.

It works as a great dipping sauce for crudites as well as a dressing for salad.

1. Empty the yogurt into a bowl, but do not whisk it (which would make it become watery). Whisk together the strawberry puree, orange juice and honey. Gently stir into the yogurt.

Recipe from "The Frog/Commissary Cookbook" by Steven Poses, Anne Clark and Becky Roller

1. In a medium bowl, combine the shallot, salt and vinegar with a wooden spoon. Let rest for 10 minutes to take the edge off the shallot.

2. Stir in the mustard. Pour in the oil slowly, stirring all the while to create an emulsion. Sprinkle generously with pepper. Taste and adjust the seasoning. Cover and refrigerate until ready to serve. Keeps up to 1 week in the refrigerator in a glass jar with a tight lid.

1. Whisk together the vinegar, salt, yogurt and pepper. Whisk in the oil.

2. Serve immediately or store in refrigerator.

1. Have all the ingredients ready before beginning. In a blender, put the egg yolk, mustard, wine, wine vinegar, salt, thyme, white pepper, oregano, nutmeg, rosemary and basil. Mix well at medium speed for 30 seconds, taking care not to turn off the blender.

2. With the blender still on, slowly add the oils, pouring them in a very thin stream into the liquid in the blender. Take care to add the oil slowly so the dressing will not separate. Refrigerate before serving.

1. In a food processor or blender, mince the garlic. Add the tahini, yogurt, lemon juice and salt, and puree to blend. Taste for seasoning.

2. Store the dressing in the refrigerator for up to 1 week; shake to blend again before using.

Recipe from "Salad as a Meal" by Patricia Wells

1. Mix the egg in a food processor or blender, or whisk by hand, until light-colored. Gradually add the corn oil so that it is well blended. Add the remaining ingredients and mix thoroughly.

2. Chill before using. Store in refrigerator.

Recipe from "The Frog/Commissary Cookbook" by Steven Poses, Anne Clark and Becky Roller

1. Mound anchovies, garlic and salt on a cutting board. Using the side of a chef's knife, mash and chop until well combined, then continue to work mixture, holding knife blade at an angle, until a smooth paste forms. (Alternately, you can use a mortar and pestle or mini chopper to do this step.)

2. Whisk egg yolk, lemon juice and mustard in a medium bowl. Place a kitchen towel in a medium saucepan, then place bowl in pan. (This holds the bowl in place while you whisk with one hand and pour oil with the other.)

3. Adding drop by drop to start and whisking constantly, drizzle a few drops of oil into yolk mixture. Continue, going slowly, until mixture looks slightly thickened and glossy. Continue to whisk, gradually adding oil in a slow, steady stream until all oil has been used and mixture looks like mayonnaise. Add a dash of water and whisk, adjusting with more water if needed, until dressing is the consistency of heavy cream.

4. Add anchovy mixture and Parmesan and whisk until smooth. Taste and adjust seasoning with salt, if needed.