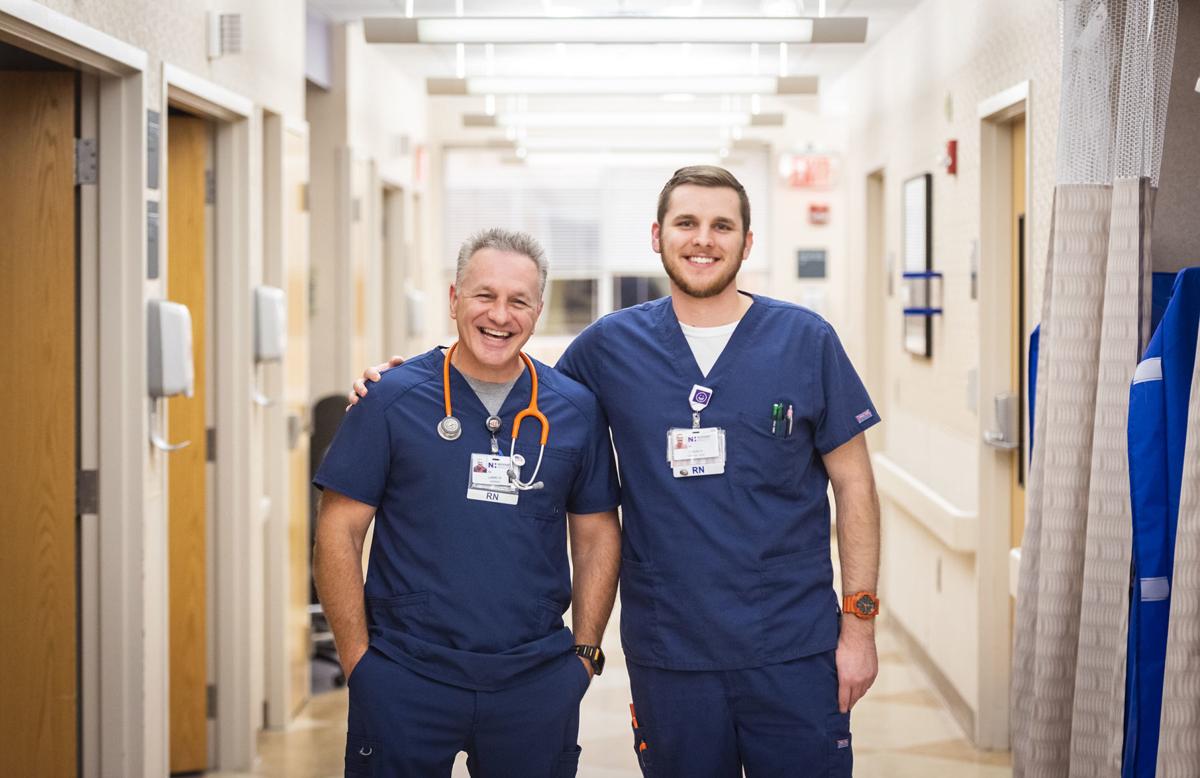 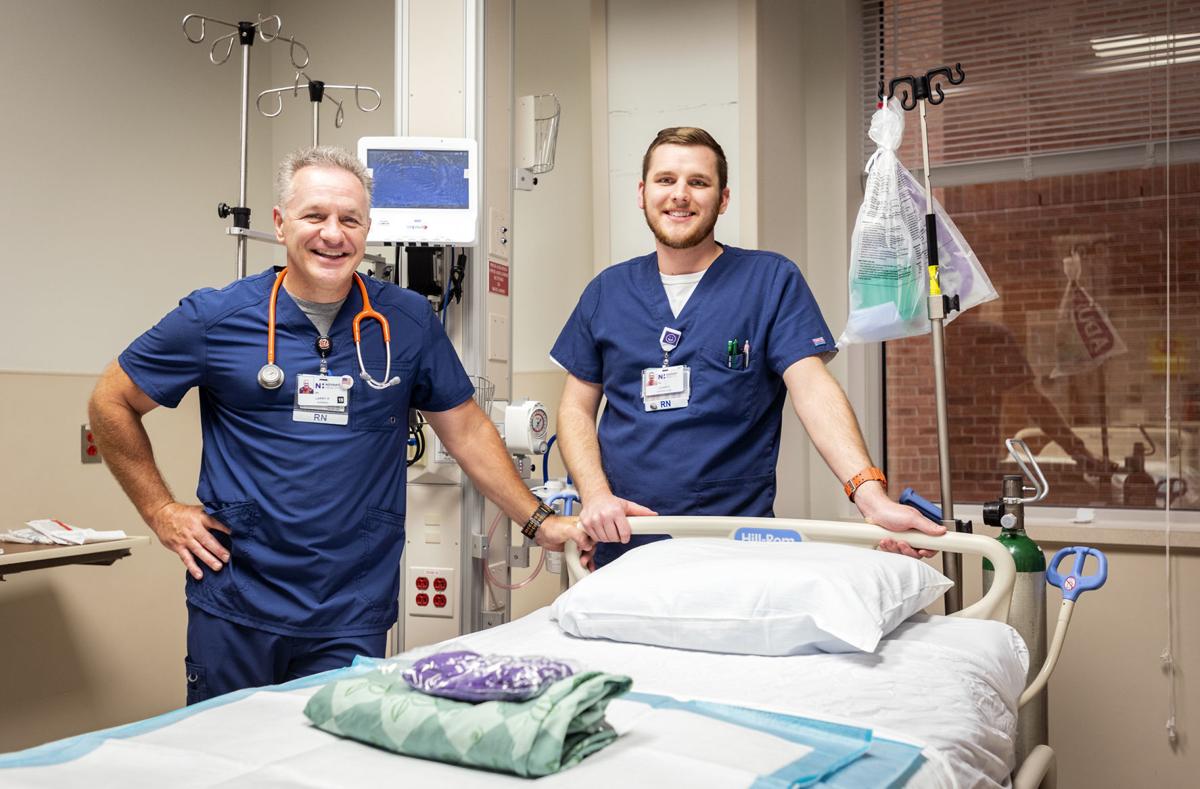 Larry Rehrig (left) and son Logan both said wife and mother Tina Rehrig’s illness led them to careers in nursing.

Larry Rehrig (left) and son Logan both said wife and mother Tina Rehrig’s illness led them to careers in nursing.

The saying may go “like father, like son,” but in the case of Larry and Logan Rehrig, it’s the other way around.

After a 20-year career in television, father Larry Rehrig followed in the footsteps of his son, a certified nursing assistant, attending nursing school alongside him.

“At 51, I’m only two years into my new medical career,” said Larry, now a registered nurse at Novant Health Clemmons Medical Center. “People always say ‘How did you get from television to nursing?’ ”

While the decision to attend nursing school came at different stages of life for the father-son duo — Larry Rehrig exiting a decadeslong career and son Logan having just graduated from high school — they drew inspiration from the same place.

About 15 years ago, Tina Rehrig, Larry’s wife and Logan’s mother, received a diagnosis of an aggressive form of breast cancer. She survived.

“Every patient that I’ve ever had, when I look at them, I don’t see them as ‘Carol,’ ‘Barbara’ or ‘Frank,’ I see them (the way I saw) my wife with breast cancer,” said Larry, former chief photographer at WXII in Winston-Salem. “And that’s how I take care of them: as family.”

‘Everybody has a story to tell’

While Logan, who was 9 when his mother’s condition was diagnosed, always knew he wanted to pursue a medical career, his father’s path to nursing was more winding.

In college, Larry originally planned to major in business and open his own business, but a tour of a local radio and TV station changed his career trajectory, he said.

“I fell in love,” said Larry, who was born in Slatington, Pa. “Not kidding; I changed my major the next day.”

Larry graduated from Millersville University in Pennsylvania with a degree in broadcasting and worked for a few years at a local station there.

But the Pennsylvania winters eventually drove Larry and his wife, who was eight months pregnant at the time, to Winston-Salem.

After working at several news stations, Larry began working for WXII in 1998, becoming the station’s chief photographer until he left in 2012.

“Television was my passion. It felt more like a hobby than a job,” he said. “I like getting out, seeing the world and listening to people’s stories.”

Storytelling has become a common thread for Larry as he has transitioned careers.

In nursing, Larry gets the chance to meet new people each day and hear their stories while helping them heal on the orthopedic medical-surgery floor, where he has worked since March 2018.

“One of my favorite things is getting to know my patients’ stories,” he said. “Everybody has a story to tell.”

Nursing has become a labor of love for Larry, although he never considered it as a career option until his wife’s cancer diagnosis in the early 2000s.

While most cancer diagnoses are unexpected, Tina Rehrig’s breast-cancer diagnosis came especially as a shock to the healthy mother, who was 35 at the time, and her family, Larry said.

“She had no signs, no symptoms, no family history,” said Larry, emphasizing the importance of self-checks and early detection. “There was nothing there that (predicted) she was going to have breast cancer.”

After a lumpectomy, Tina and her doctors decided the cancer was aggressive, and she had a mastectomy, reconstructive surgery and months of chemotherapy that left her sick for several days after each session, Larry said.

Logan, 23, said the strength his mother — who is now in complete remission — exuded during her cancer journey inspired him and made him certain he wanted to pursue a medical career.

“Seeing her go through being sick and the process of her getting better made me decide I wanted to help people,” said Logan, now a registered nurse in the neurology intensive care unit at Novant Health Forsyth Medical Center. “I thought maybe I could be a positive influence in someone’s life.”

Larry said his wife’s cancer also made him think nursing could be a promising career possibility if he ever left journalism.

As he watched his son complete his CNA certification and enter into the throes of considering nursing schools, he thought about it even more, he said.

Then, in 2012, two weeks after his job was eliminated at WXII, he took the leap: He applied for nursing school.

After taking some prerequisite chemistry and biology courses, Larry became one of the 72 students accepted each semester in Forsyth Technical Community College’s two-year nursing program.

While exciting, getting back into school mode at age 45 after years of working was a challenge, he said.

“Going back to school was probably the hardest thing I’ve ever done,” said Larry, who lives in Rural Hall. “But it was always nice to have my son there to bounce things off of.”

Because Larry, a father of two, was a semester ahead of his oldest son, they only had one class together during the program: a labor and delivery course.

Logan — who hopes to one day become a certified registered nurse anesthetist — was still living at home at the time, so they were able to carpool, discuss their classes over the dinner table and study for exams together.

“It was kind of a little competition to see who could do better, kind of fun,” said Logan, who started nursing school at age 19. “Being more of a peer and less of a son, I saw him in a whole different light. He has a lot of compassion for other people.”

The two graduated with their associate degrees in nursing — Larry in December 2016, and Logan in May 2017.

The father-son duo didn’t have a chance to walk together at the May graduation because they both had jobs, Larry said.

But they are planning to go back to school.

“We want to do (our degrees) together at the same university and eventually walk together and support each other,” Larry said. “That’s what it’s all about.”

Jenny Drabble is a reporter for the Winston-Salem Journal.

Ed Hardin: Sedgefield becomes a test as the Wyndham heads to the weekend