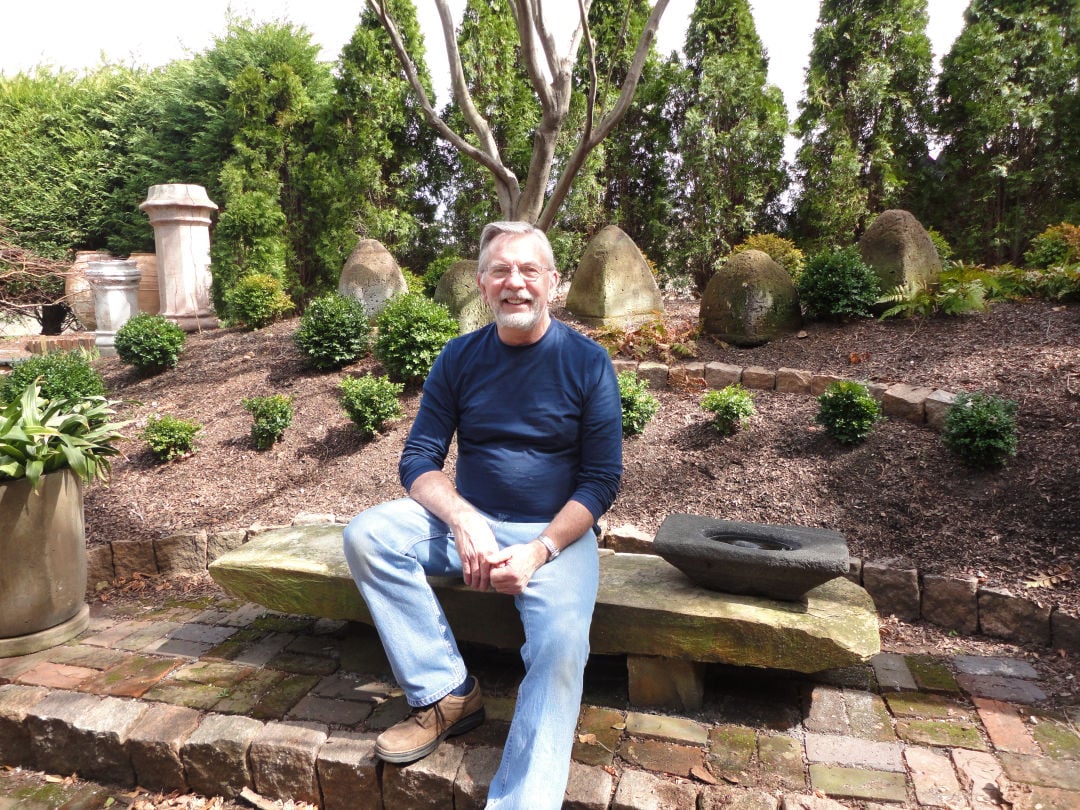 Dan Garrett in the courtyard behind The Farmer's Wife, sitting on a bench that was the hearth stone in his grandfather Garrett's home. The terraced backdrop made up of large stones and cedar trees was designed and built by Garrett. Behind the cedar trees is an old train station. 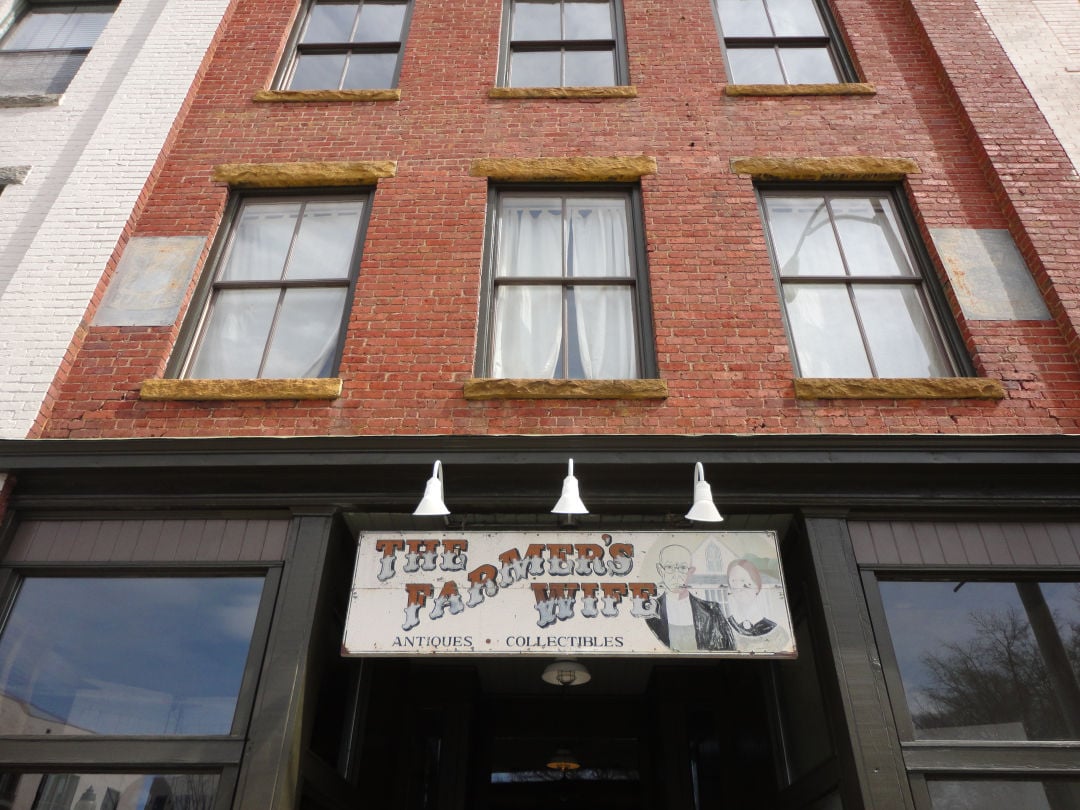 The exterior of The Farmer's Wife at 339 S. Davie Street in downtown Greensboro. 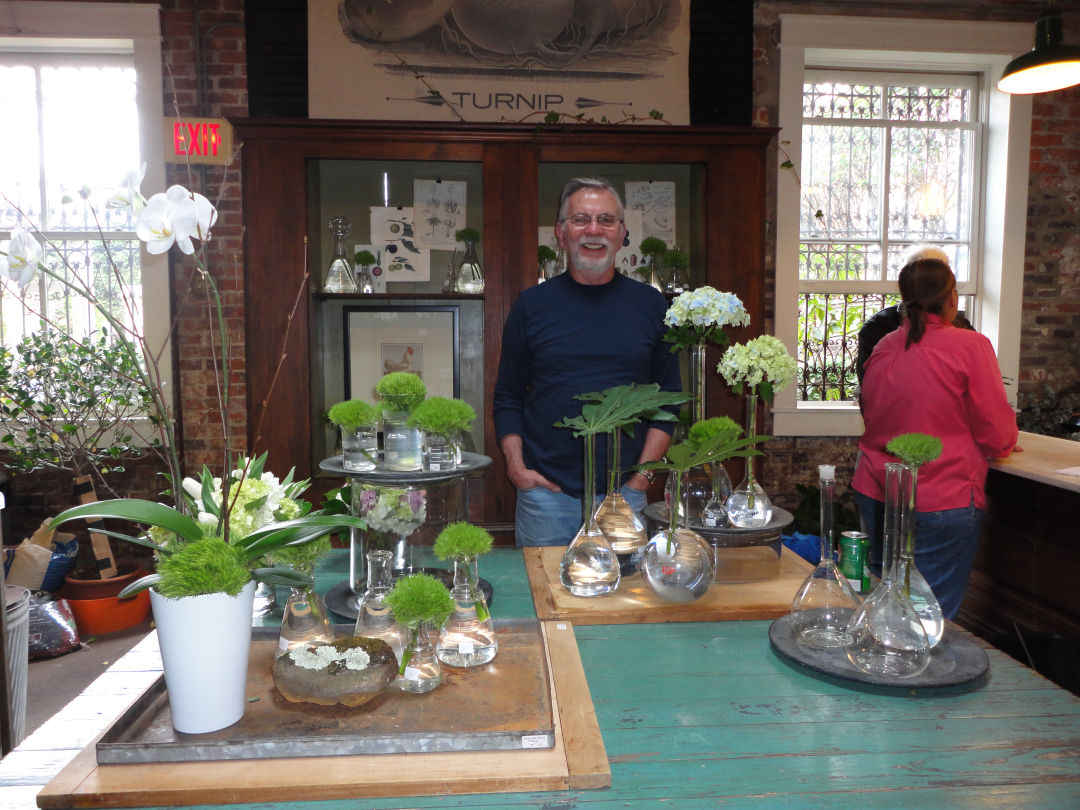 Dan Garrett is preparing for a busy day in The Farmer's Wife. This is a table in the florist filled with green plants (dianthus) known by the name of Green Ball or Green Trick displayed in varying sized and shaped containers.

Have you ever walked into a store, and all at once questions started popping into your head?

Where did it come from?

How was it used?

This is the reaction I had upon entering The Farmer’s Wife on 339 S. Davie Street in downtown Greensboro.

The Farmer’s Wife is owned and operated by Daniel Garrett, originally from Pleasant Garden. He’s a graduate of Southeast High School and UNC-Greensboro with a degree in art.

This artisan has taken the simplest items in nature and architectural structures and displayed them in his Antique Shop with unique beauty, charm and grace. I am reminded of the Benjamin Franklin saying: “A place for everything, everything in its place.”

Growing up in Pleasant Garden, Garrett worked in farm crops and a garden each year, where he heard “chirping crickets and mooing cows.”

In downtown Greensboro, near the Depot, he hears honking horns and whistling trains.

Garrett was always interested in old things and going to auctions — a longing he acquired from his grandparents.

Garrett’s first business venture was an antique shop on South Elm Street. As he was setting up the shop, he ran across an old magazine titled “The Farmer’s Wife,” which later merged into the well known “The Progressive Farmer” magazine.

When the 7,000-square-foot building on Davie Street went in foreclosure and came up for auction, Garrett bought it. He moved his antique business and residence into Old Greensborough and named his store The Farmer’s Wife.

The building was once an old grocery store and then a feed-and-seed store. The curb in front of the building remains open as a reminder of the days when horses could pull wagons into the building for supplies.

He had a lot of remodeling to do before the shop was ready to open, but there was no stopping Garrett with his fortitude, tenacity and vision for the future.

Garrett preserves the integrity and authenticity of his acquired antiques by keeping them in their original condition. He quotes Leonardo da Vinci: “Simplicity is the ultimate sophistication.”

Antiques for the shop are acquired from a handful of dealers, auctions, flea markets and people just bringing in items.

Each item has its own special story, which Garrett is willing to tell. He does not formally advertise but relies on “word of mouth” and has many repeat customers between 10 a.m. to 5 p.m. Monday through Saturday.

Serendipity led Garrett to add a florist shop to his store.

He had been displaying flowers with the antiques, and customers wanted to buy the flower arrangements. This led into a very profitable business. A large glass refrigerator containing various hues of hydrangeas, roses and other flowers purchased in South America line one side.

Garrett is a staunch Carolina fan, but that did not stop him from supplying flowers to a Duke alumni dinner at the Greensboro Country Club during the ACC tournament for the fifth year.

This master antique collector and flower arranger recently prepared for his many customers at the High Point Furniture Market.

Garrett lives on the second and third floors of the building. Part of the second floor is used for storage with the remainder of the floor decorated as Garrett’s kitchen and living area. Pictures of cows decorate the kitchen. Even with all of the antiques, Garrett has modern convinces in his living area.

The third floor is wide and spacious with all being used as living quarters.

One of the items that caught my eye was a book press, which was used to hold a book while the cover was being sown to the pages. The tables in the living quarters seemed to have a theme with items denoting Garrett’s favorite things — especially books. Black and white prints adorned the walls on all three levels of the old building, bringing a nostalgic feeling as I meandered throughout the building.

Out the door of the flower shop is a beautiful courtyard that Garrett designed and built. He has a terraced backdrop to the cobblestone floor with steps that lead up to the nearby train tracks.

The center of attention in the courtyard is a long concrete bench that had been a hearth stone in Grandpa Garrett’s home in Pleasant Garden.

It was hard to say good-by to Garrett and The Farmer’s Wife. There were so many more questions to be asked.

I guess I need to make another visit. Perhaps I’ll see you there. The Farmer’s Wife is a well-kept secret, but you may tell someone.

Dear Annie: Don't give in to people who make you feel inferior, they're likely unhappy themselves

Husband's refusal to get a COVID-19 vaccination leaves woman visiting their first grandchild without him.

Dear Annie: Like the old saying goes, laughter can be the best medicine

Also, tips from the FBI on how to avoid dating scams.

Dear Annie: Trying to fix your marriage is OK, taking abuse is not

Also, help for those who want to quit or cut back on their drinking.

Also, getting a college education later in life pays off for one reader.

Dear Annie: Poem shows how people can be together, even when apart

Also, a reader finds her friend's constant negativity after a divorce difficult to handle.

ARIES (March 21-April 19): To execute the fabulous thing you have in mind, you'll have to free up your schedule. Coming up with the money will…

ARIES (March 21-April 19): Love fills your entire world because you see some version of it wherever your eyes land. Even the grass seems to si…

ARIES (March 21-April 19): Be wary of those who find your curiosity to be an intrusion. It is only because they have something to hide. To tho…

WATCH: N.C. A&T senior Victor Solomon advances to the audience-voting round of "The Voice"

College basketball is religion in NC. But its future, allure of UNC and Duke are in doubt

Dan Garrett in the courtyard behind The Farmer's Wife, sitting on a bench that was the hearth stone in his grandfather Garrett's home. The terraced backdrop made up of large stones and cedar trees was designed and built by Garrett. Behind the cedar trees is an old train station.

The exterior of The Farmer's Wife at 339 S. Davie Street in downtown Greensboro.

Dan Garrett is preparing for a busy day in The Farmer's Wife. This is a table in the florist filled with green plants (dianthus) known by the name of Green Ball or Green Trick displayed in varying sized and shaped containers.