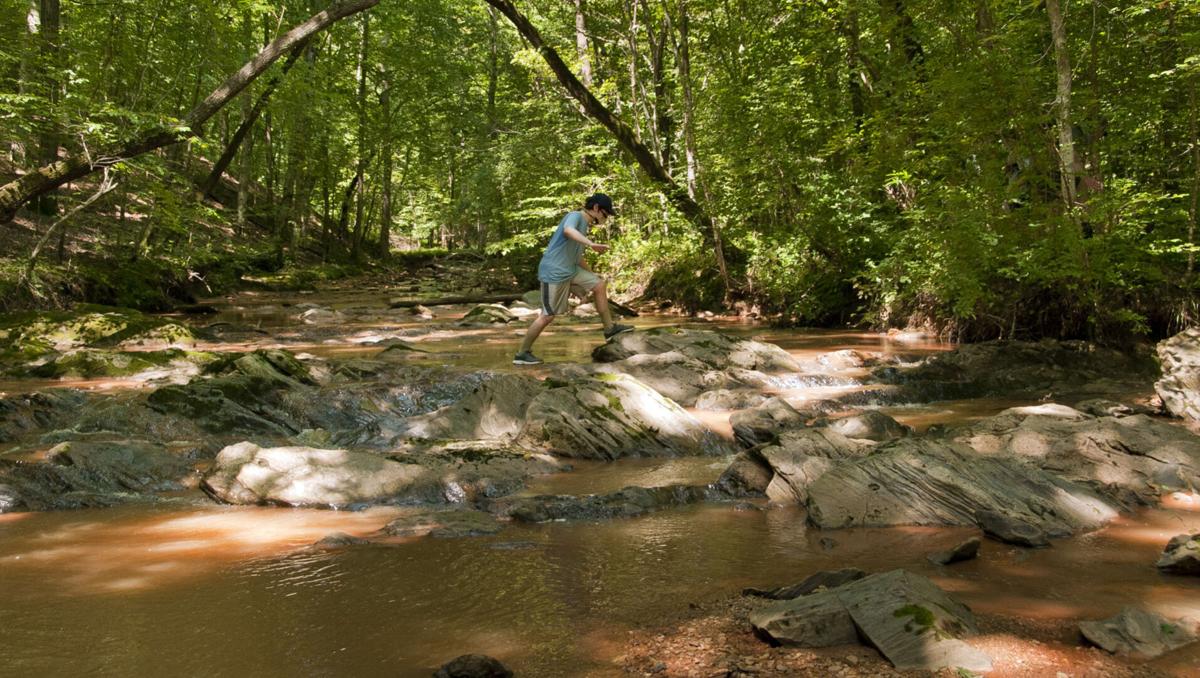 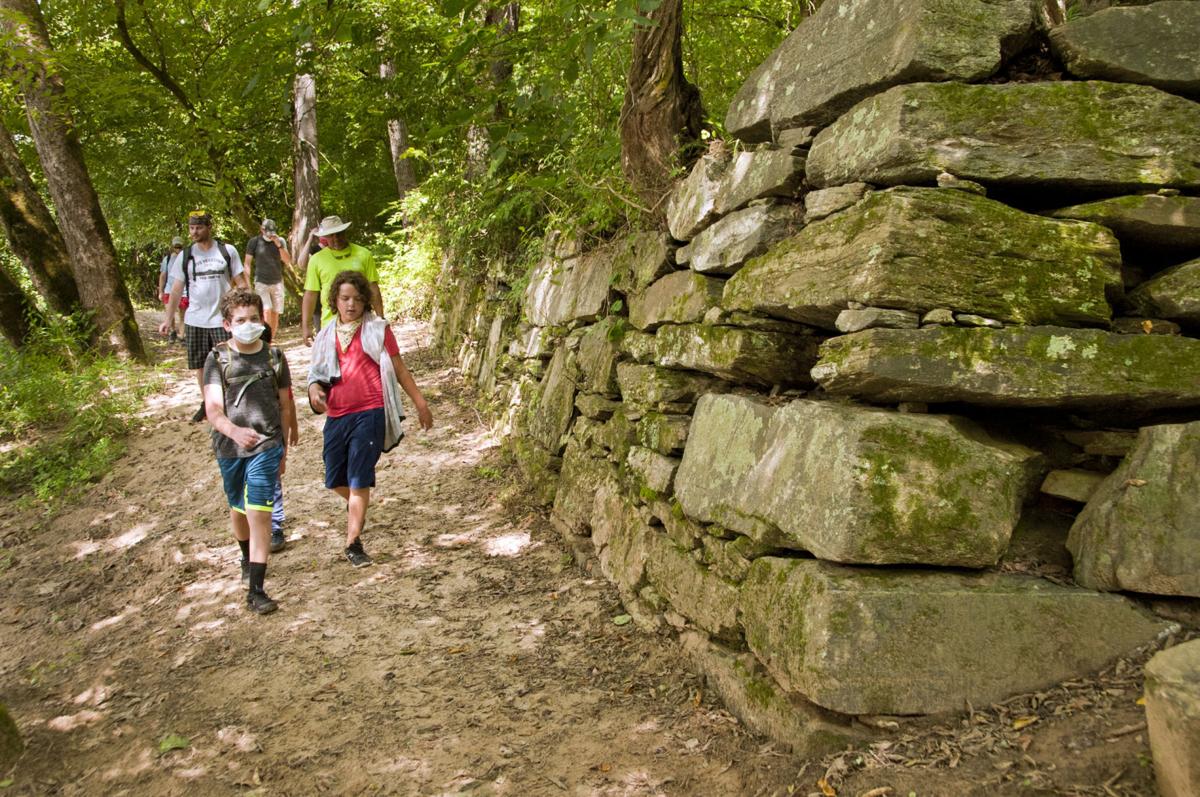 Hikers walk along the ruins of Bean Shoals Canal in Pilot Mountain State Park’s Yadkin River section. The failed canal was an attempt to create a navigable route around the rocky shallow of the Yadkin River in the 1820s.

The urge to get outside during the COVID-19 pandemic has pushed North Carolinians to state parks in record numbers. Despite the park being closed for several weeks at the beginning of the pandemic and the campground still being closed, Pilot Mountain’s visitation numbers for the year are well above 2019’s record.

Attendance on summer weekends rivals those on prime leaf peeping weekends in the fall. Last weekend, the park’s summit parking lot was full by 9:30 a.m. But at the same time, the park’s Yadkin River section was less than half full.

The Yadkin River section contains about 6 miles of trails. The Corridor Trail, a bridle and footpath that connects the park’s mountain and river sections, adds another 6.6 miles outside the main entrance.

A highlight of the Yadkin River section is the ruins of the Bean Shoals Canal. The canal was an attempt to build a navigable route around the Yadkin River’s rocky shallows between 1820 and 1825. The Yadkin Valley Railroad line runs above the canal walls today.

The gravel drive that leads from Hauser Road to the Yadkin River is currently closed. The park is assessing whether to permanently close the drive to prevent degradation from vehicles where the drive fords Horne Creek, park ranger Nick Bowman said. Instead, drive another 0.2 miles past the entrance and park in the Corridor Trail lot.

The Yadkin Islands Trail leads from the lot to the river. After the creek crossing, follow the footpath blazed by white triangle blazes rather than the gravel drive. This shortcut keeps you in the woods and shaves a quarter mile from the road’s distance. Once the trail meets up with the road again take a hard right to remain on the footpath. The turn is easy to miss.

Aside from a short climb or two and the descent to the river, the trail is fairly flat. Use caution when crossing the train tracks — this is an active line of the Yadkin Valley Railroad.

Once arriving at the river, go right on the 0.5-mile, red-blazed Bean Shoals Canal trail to explore the canal’s ruins. Sandy spots along the river provide a good place to fish or dip a toe in the river when the water is low.

You can return to the parking lot via the gravel drive by turning left at the junction of red- and blue-blazed trails. But you’ll be rewarded with a more pleasant hike by continuing along the Yadkin River to the blue-blazed Horne Creek Trail. This 2.5 mile trail follows the Yadkin to the intersection with Horne Creek, then gently follows the creek through mixed hardwood to a picnic area along the aforementioned gravel drive.

Street addresses for all of the park’s remote parking lots have recently been added to the state park’s website. “It makes it a lot easier to give a street address that visitors can plug into their phone or GPS rather than trying to explain turn-by-turn directions,” Bowman said.

Walt Unks is the photo editor for the Winston-Salem Journal. Contact him at wunks@wsjournal.com or 336-727-7250.

Need to get away?

With wineries and waterfalls, Elkin aims for Trail Town status

An Elkin-based group is working to define the town as a North Carolina Trail Town.

Horror fest Carolina-style: These spooky movies were filmed in the Piedmont Triad.

No. 1 Clemson looks for 27th straight ACC win vs. Syracuse

Hikers walk along the ruins of Bean Shoals Canal in Pilot Mountain State Park’s Yadkin River section. The failed canal was an attempt to create a navigable route around the rocky shallow of the Yadkin River in the 1820s.