The bass guitar that Talking Heads bassist Tina Weymouth played during her induction ceremony in 2002 stands on display at the Rock and Roll Hall of Fame in Cleveland, Ohio. 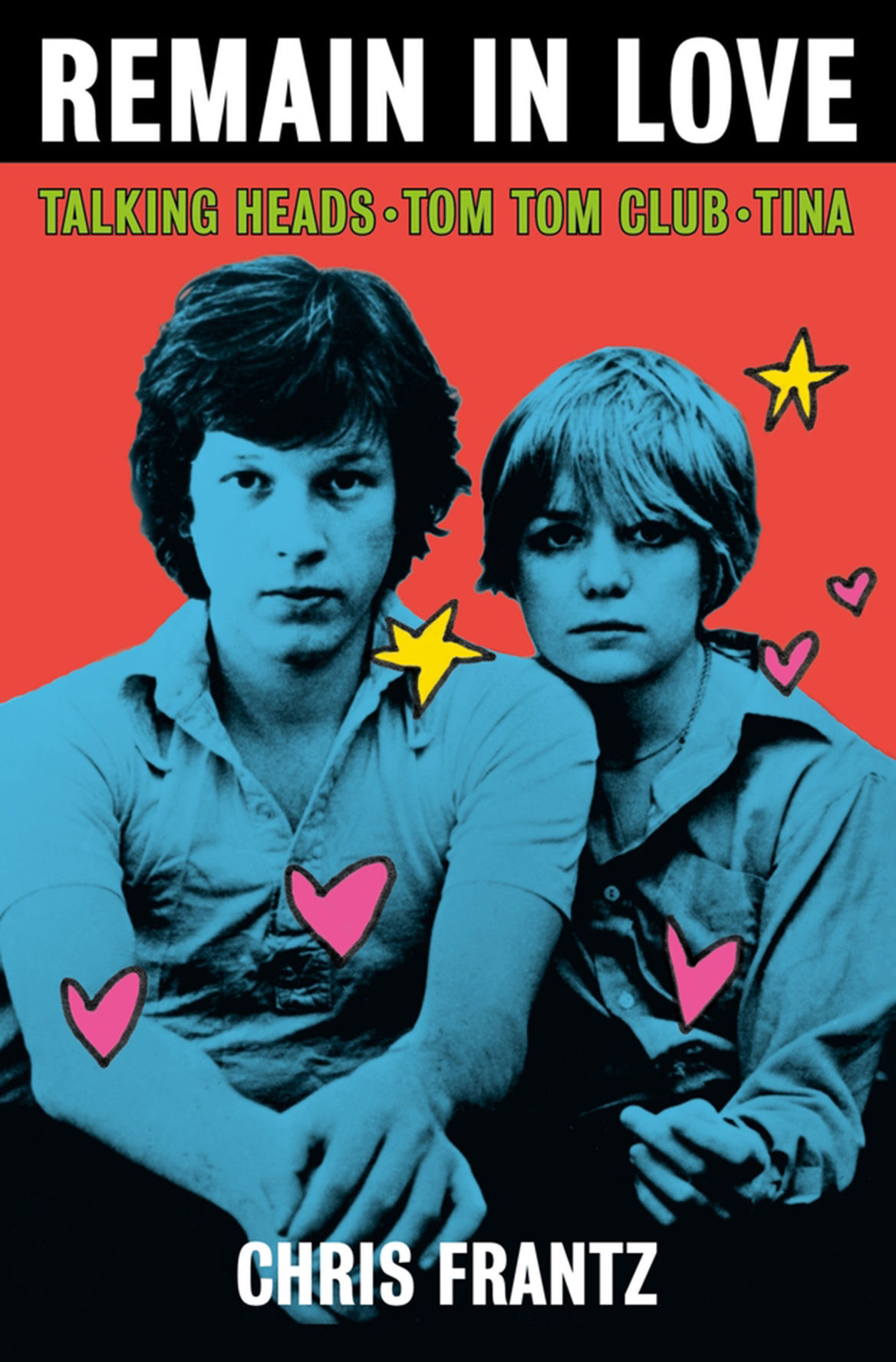 The bass guitar that Talking Heads bassist Tina Weymouth played during her induction ceremony in 2002 stands on display at the Rock and Roll Hall of Fame in Cleveland, Ohio.

PITTSBURGH — No offense to trumpet players, but it’s a good thing Chris Frantz wasn’t able to master the instrument as a kid at the Kerr School in O’Hara.

Sensing his feel for rhythm, his band teacher handed him a pair of sticks and a drum pad. Just over a decade later he would become a co-founding member of Talking Heads and, eventually, an inductee into the Rock and Roll Hall of Fame.

In the new memoir “Remain in Love: Talking Heads. Tom Tom Club. Tina.,” Frantz, who was born in Kentucky, tells the story of growing up in Pittsburgh, where he developed a love for the arts and, against the concerns of his parents, chose to study painting at the Rhode Island School of Design.

There, he befriended the coolest girl at the school, Tina Weymouth, along with one of the most socially awkward characters at RISD: a lanky, high-pitched singer/guitar player named David Byrne. After graduating and moving to the Bowery in New York, Talking Heads made their debut in the spring of 1975 to about 20 people on a bill with The Ramones at CBGB.

With a set that included an edgy, Alice Cooper-inspired rocker called “Psycho Killer” — Weymouth wrote the French part — Talking Heads found a foothold in that burgeoning scene populated by Television, the Patti Smith Group, Blondie, Richard Hell, and The Modern Lovers. Frantz, at one point, notes that Talking Heads were post-punk before there was punk.

The leather-clad Ramones took a particular liking to the three art geeks from RISD because they made the Ramones sound even better, so they took Talking Heads with them on a European jaunt in the spring of ‘77. Despite having released just one single, “Love — Building on Fire,” Talking Heads were a surprise hit with European crowds hankering for this new alternative to the usual Zeppelin, Who, Stones, etc.

His tales of this odd coupling, on a bus with the ill-tempered Johnny Ramone, make for the most entertaining and detailed parts of his memoir, right down to what they ate for dinner. (Spoiler alert: the Ramones were desperate to find a McDonald’s.)

Once Talking Heads return home to become major-label recording artists, Frantz provides insight into each album’s creative process which, by his account, was much more collaborative among the four players (with new guitar-keyboardist Jerry Harrison) than people were led to believe.

He describes how the band’s association with Brian Eno, producing such brilliant work as “Fear of Music” and “Remain in Light,” also served to drive a wedge between the three founders.

Upon demonstrating the full force of their live show with the 1984 concert film “Stop Making Sense,” Byrne abruptly declares the end of Talking Heads as a touring ensemble and begins shifting his focus to solo work. In a surprise twist, the husband-and-wife team of Frantz and Weymouth end up having more commercial success with their funky side project Tom Tom Club, hitting the pop charts with “Wordy Rappinghood” and “Genius of Love.” (Their last album was in 2012.)

Talking Heads capped its 11-year recording career in 1988 with “Naked” and then in 1991, Frantz and Weymouth got word that the band was finished — from a Los Angeles Times reporter confirming a quote from Byrne. That’s how they found out.

Since then, the only reunion has been their induction into the Rock and Roll Hall of Fame in 2001, which turned out to be an eventful night for Byrne and his now ex-wife.

Frantz, 69, spoke to us from his home in Fairfield, Conn., in advance of the book’s July 21 release.

Fantastic book. It has a great balance between the creative process and the stories and celebrity cameos. Did you read some other bios for inspiration?

You know, I have an enormous bookshelf full of rock ‘n’ roll memoirs. I don’t always read them (laughs) but one that I really liked was Ian Hunter’s “Diary of a Rock ‘n’ Roll Star.” That was quite a while back, and remember that band The Slits from the punk days? Viv Albertine has written two excellent memoirs. The first one is called “Clothes, Clothes, Clothes. Music, Music, Music. Boys, Boys, Boys” and it’s fun and it’s about her early punk days with Mick Jones from The Clash and Sid Vicious. It’s well written and she wrote it herself. You know, when I was thinking of doing this, a lot of people assumed I would use a ghost writer, but my choice was to do it myself because I had a good Shady Side Academy education!

It sounds like those formative years in Pittsburgh did set you up well for a music career.

Pittsburgh was, is, a great city, and in those days, it felt, at least in my world, like more of a small town than a big city. The only time I ever went Downtown was to visit my father at his office. But in my school years I was surrounded by talented people who played music and wrote poetry and made paintings, and some people were aspiring actors, and it was fun. We had a good time and it did set me up. As I say in the book, I had an epiphany one day when I was about 15, maybe 16, that I wanted to be an artist and that’s what I was going to do with my life.

So, what compelled you to write this book? It seems like you wanted to set the record straight on a lot of issues with David.

As you describe, a lot of songs originated with the rhythm section. It wasn’t David saying “play this.”

No, he never told us what to play. It was a more collaborative effort than people seemed to realize.

From the book, you get the impression that Tina brings home a bass one day and all of a sudden could play it. How arduous was that process for her?

She was self-taught. Some people think David or I taught her. No, we were not bass teachers. She had great taste in bass players that she admired, like the great Carol Kaye. And the Motown bass players, one of whom was from Pittsburgh, and Paul McCartney. She had played acoustic guitar, so she knew chords and she had played flute, so she could read music, which was something David and I couldn’t do, which came in handy when we had to transcribe the songs to get them published. Tina did all that. One reason I wanted her to be in the band is that she had a shared aesthetic, but I also knew from dancing with her, she had a wonderful sense of rhythm.

One of my favorite parts of the book is the crazy tour with the Ramones. And there’s all this detail. But you don’t seem like the kind of person who kept a journal.

No, I bought a couple journals, but I never wrote in them. I’m kicking myself now. But Tina kept accurate datebooks with dates and ticket sales and stuff.

Johnny’s behavior was insane but you got to see the Ramones every night. Do you wish it had been another band or do you treasure that experience with the Ramones?

Despite Johnny’s bad temper, I wouldn’t change a thing. To my way of thinking, one of the best rock tours of all time. Can you imagine today seeing such a bill? You might have to go to Coachella to see it. It was a very exciting time with the explosion of punk rock in the UK and Europe. The Clash and Sex Pistols had just released their first albums. The Damned. The Stranglers. Elvis Costello was rearing his head. The Jam. The Slits. It was totally exciting.

You met basically everyone and the book has these interesting cameos: Bowie taking your food, the encounters with the untalkative Andy Warhol, Joe Strummer storming into the dressing room. You don’t hold back on how you describe them.

You know, when I read a memoir I’m interested in not just the person who wrote the book but also the people who are part of that person’s life. I’m big on celebrities. I love celebrities. I didn’t get to spot many celebrities when I was living in O’Hara Township, but I would go, “There goes the chief of police!”

5 Guilford detention officers tested positive for COVID-19, but the disease has not spread among inmates, sheriff's office says

The Syllabus: Grieving at Guilford College