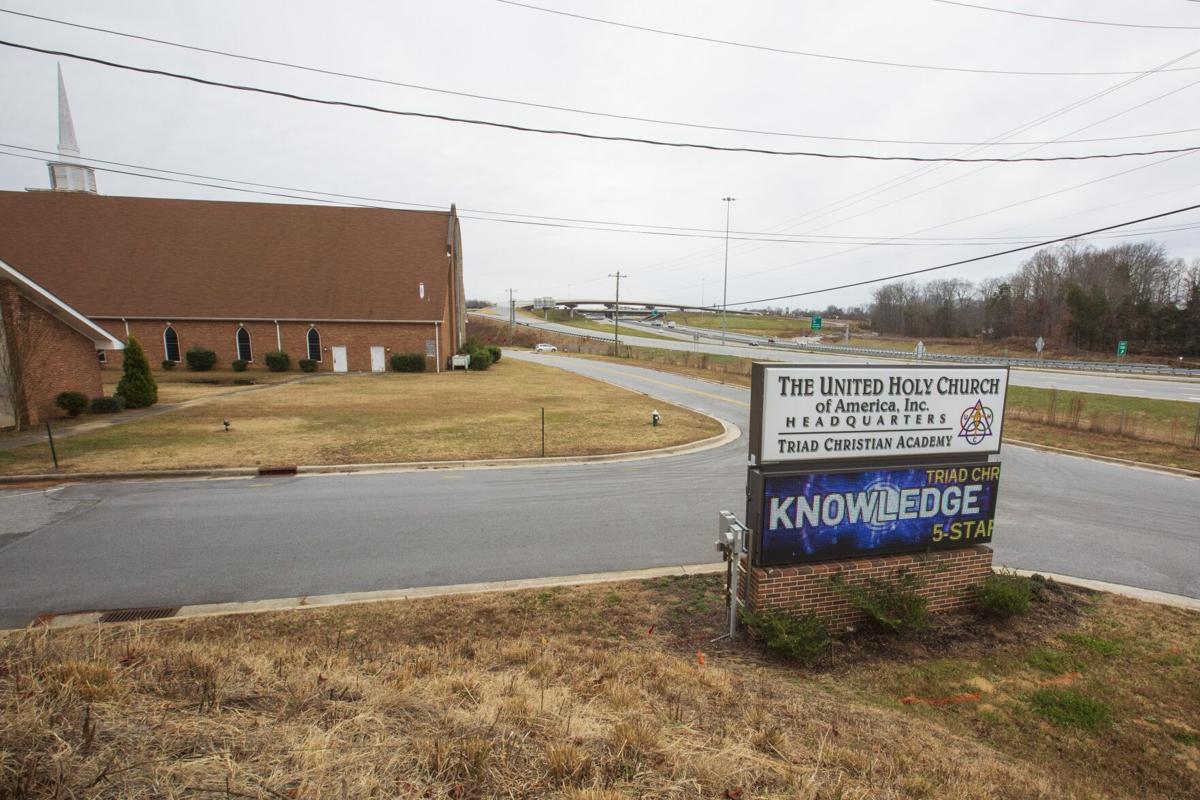 The United Holy Church of America is pictured along U.S. 29 in Greensboro on Dec. 21. The church/denomination already owns about 15 acres that connect to the 6 acres that the sons of the owners sold after their widowed mother died. The church is looking into building affordable housing there, but is in the early stages.

GREENSBORO — Sweet potatoes used to grow here in the shadow of U.S. 29 and the new Greensboro Urban Loop in northeast Guilford County.

The sale of 6 acres of farmland on Dunstan Road will help the United Holy Church of America Inc. with a goal of providing affordable housing — another much-needed community staple, according to a housing report by the city of Greensboro.

“This is the culmination of a vision,” said Bishop Harry L. Cohen, who serves as head of the denomination. “This will allow us to be a blessing to this community.” 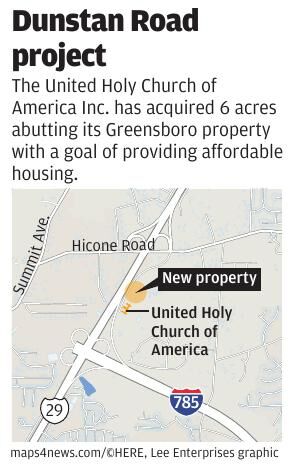 After the death of their matriarch, the W.W. Roberson family, which owned the land, sold the group a crucial piece of acreage abutting what it already owns there. The property is also home to a day care and serves as the international headquarters for United Holy Church of America, the country’s oldest Black Pentecostal Holiness denomination.

The Roberson family had lived there for decades as the surrounding area went from farmland to single-family homes and subdivisions.

“We played hide and seek, cowboys and Indians and everything else out there,” said Mike Roberson, one of their three sons.

They could run through nearby woods to their grandfather’s house.

Their father was a mechanic and operated a shop on the land.

“We always had a garden, and we raised a lot of our own stuff,” Roberson said. “It was a great place to grow up.”

Several times, his parents sold land to the state as the nearby highway expanded and service roads were relocated.

Mike Roberson said he likes the fact that there will be purpose in the acreage.

“We were not moving back to the homeplace,” Roberson said of the brothers and their wives. “It’s now their land, but I am happy with what they are doing.”

The church’s long-term plan for what is being called the Dunstan Road Project involves developing partnerships.

Cohen, who pastors the New Covenant United Holy Church in Burlington, has read Greensboro’s 2020 report on affordable housing. The findings reflect problems elsewhere across the country, with the widening gap between income and the cost of housing.

If current trends continue, a consultant predicts that the city could face a shortage of 11,000 affordable-housing units by 2030.

The United Holy Church of America bought the former Brightwood Baptist Church property in 1985. It uses the facility for meetings, convocations and to conduct other international church activities. A portion of the building is rented to a local church to host its weekly services.

In 2016, Cohen was elected president of the Greensboro-based denomination, whose roots officially date to 1886, and oversees 515 churches, 17 districts and eight territories.

He sees the development of the property in line with the church’s call to evangelism, or introducing others to their faith.

Sometimes, it comes through addressing basic needs, he said.

“I challenged my churches during a recent convocation, to increase their evangelism, to reach out to the areas where they are located and bring in more souls,” Cohen said. “If a person has a place to stay, is fed and feels safe and can provide for their families, they are more likely to respond to a church’s call to ‘come.’”

Nancy McLaughlin shares some of her favorite stories from 2021

Here's some of the people and predicaments that gave us pause for thought.

He was the first Black chief justice of the N.C. Supreme Court. The YWCA bears her name. Read the story of this Greensboro power couple.

Three acres of land up for sale on this short stretch of Hiatt Street has life-altering value.

Vietnam War's fearsome legacy leaves scars not only for veterans, but their children as well

The Minish boys remember their mother having to lock herself in a room and hand them out of a window to neighbors.

The pastor died of COVID. His wife is making it possible for others to get the vaccination.

The pastor's wife helped others to get vaccinated after his death from COVID.

Study: Having extra money could impact your baby's brain

Watch Now: Tricks to get the most out of your tech devices

Watch Now: Tricks to get the most out of your tech devices

Five of the best foods for lowering blood pressure

Five of the best foods for lowering blood pressure

Before now Archdeacon Mark Menees took on the role, he steered his church through the COVID-19 pandemic and suffered a bout with the illness that left him weak and on the sidelines as others preached to his congregation while he recovered. "The last years have been challenging and yet there are opportunities we probably would not have seen as clearly without going through this," he said.

"This is the worst nightmare of any clergy, of any Rabbi," the rabbis at Temple Emanuel in Greensboro said in a prepared statement. "We are horrified that this could happen anywhere, but especially in a holy place on the Sabbath."

With religious construction on the decline, a ‘spiritual home’ can transcend a building

Religion in our community: Upcoming events

The United Holy Church of America is pictured along U.S. 29 in Greensboro on Dec. 21. The church/denomination already owns about 15 acres that connect to the 6 acres that the sons of the owners sold after their widowed mother died. The church is looking into building affordable housing there, but is in the early stages.