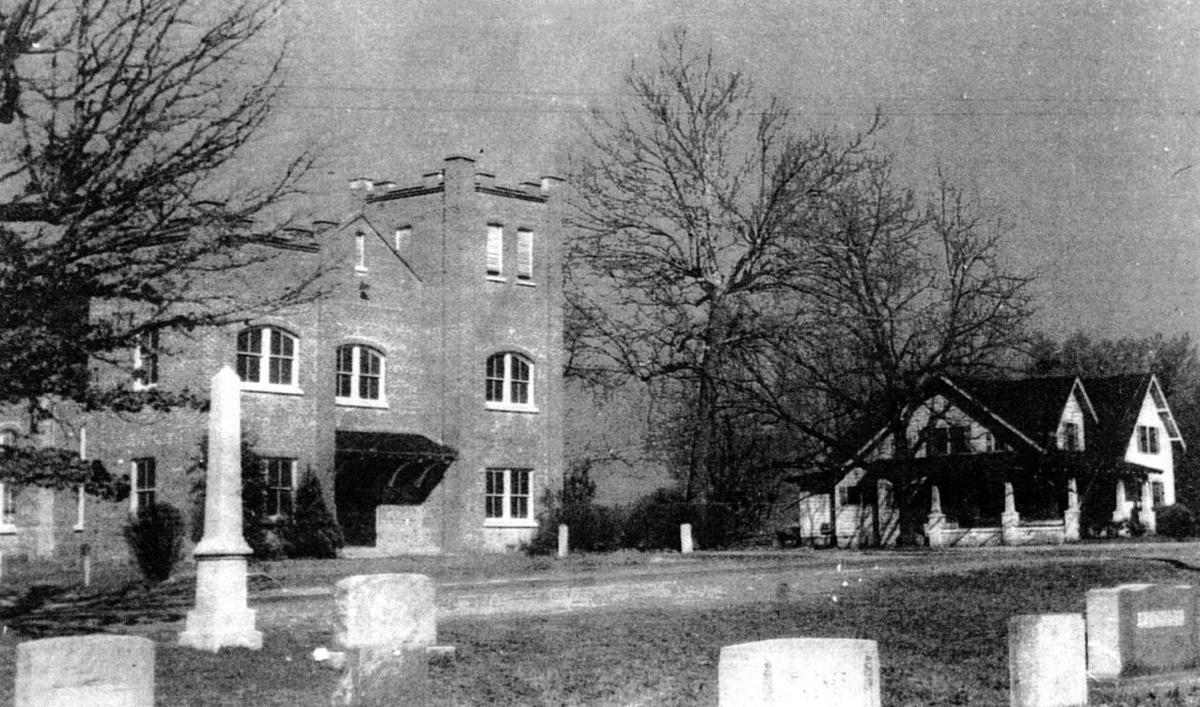 N.B. Cheek Jr. took this photograph of Pleasant Garden United Methodist Church and parsonage as the buildings appeared around 1948. 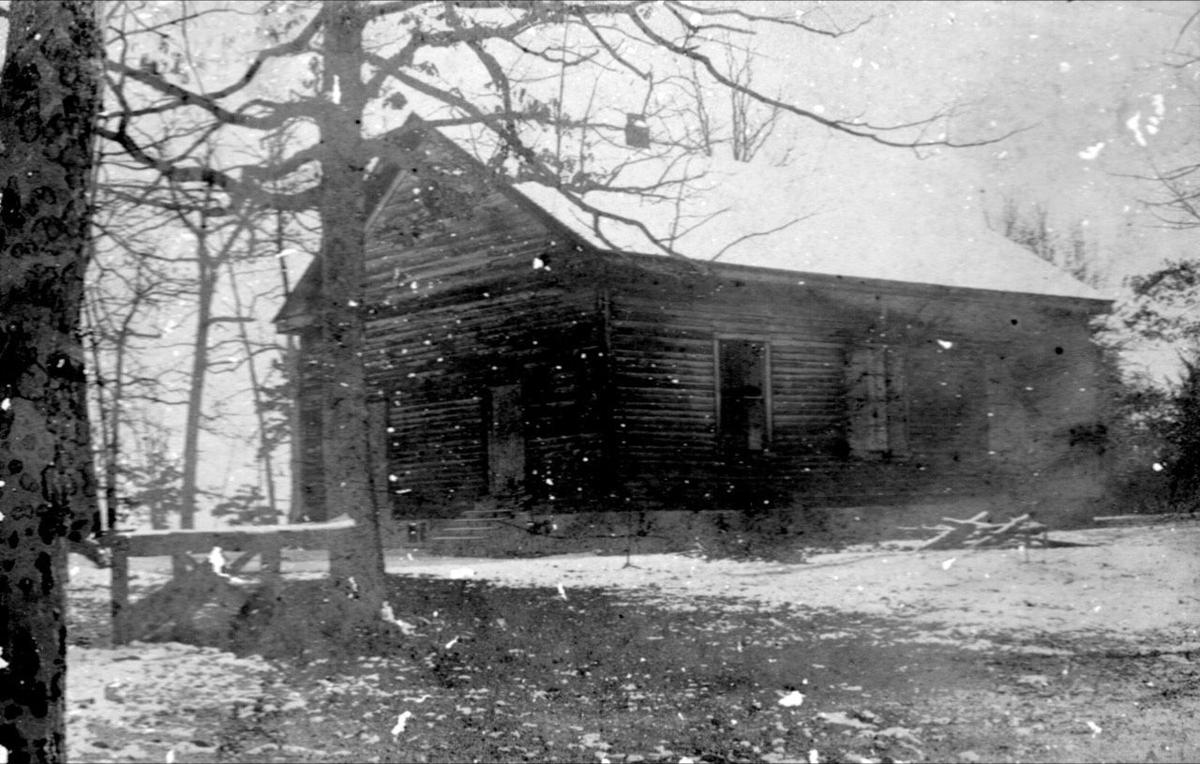 Among old photos saved by members of the W.B. Hunt family is this one that fits C.O. Kennerly’s description of the 1840 Pleasant Garden Methodist United Episcopal Church. It was replaced in 1890 by a larger brick building. 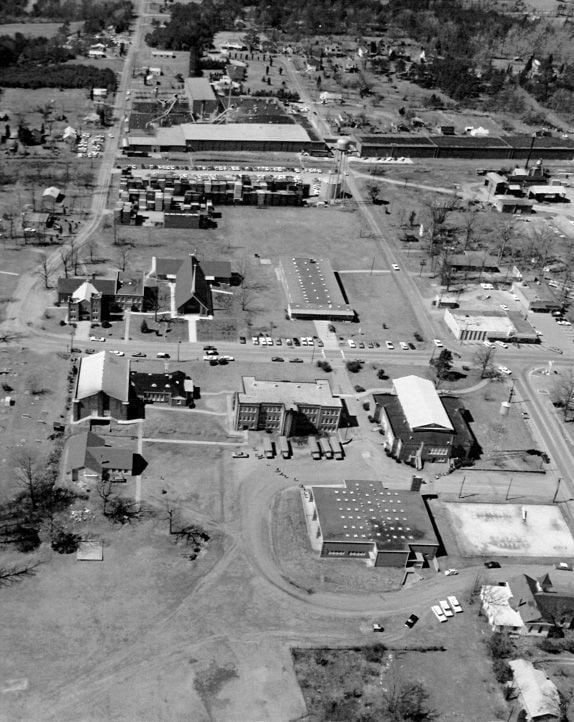 This aerial photo, made by Phillip Way, shows Pleasant Garden in 1969. Pleasant Garden United Methodist Church is shown midway on the left side. The 1920s-era church had not been demolished, but the modern sanctuary is to its right.

As the oldest congregation of its denomination in Guilford County, PGUMC (4834 Pleasant Garden Road) looks forward to celebrating this milestone at its annual homecoming, at 10:30 a.m. Oct. 8.

Bishop Paul L. Leland, who presides over the 1,136 churches of the Western NC Conference, will be preaching.

As one who is intrigued by the why’s and when’s of history, with ready access to internet, I greatly appreciate a booklet lovingly prepared by former pastor the Rev. C.O. Kennerly, “Methodism in Guilford County 1776-1965.” Kennerly, a graduate of Trinity College, forerunner of Duke University, diligently searched prime source documents to prepare this record.

John Wesley founded a movement in 1738 within the Church of England that sent missionaries to the colonies. Traveling preacher Francis Asbury, 27, answered the call and arrived in 1771. One of two Methodist ministers to remain in the colonies during the Revolutionary War, Asbury’s ministry was compromised as he became suspect among the colonists because of Wesley’s allegiance to the British Crown. Francis Asbury’s attachment to the American cause was unquestioned by his loyal followers with whom he lived along Mason-Dixon Line separating Delaware and Maryland during these turbulent years.

After the British were defeated, those protectors migrated to Southeast Guilford County to settle among ardent Presbyterians and Quakers. The Kirkmans, Sherwoods and Sullivans and their extended families from the land-locked Eastern Shore of Maryland were among those who moved into the “backwoods” of North Carolina. As “followers of Wesley,” they also brought their brand of Christianity — Methodism.

Meetings were held in Pleasant Garden in 1786, a mere two years after the new denomination was formed in Baltimore, Md. However, the official date for the establishment of Pleasant Garden Methodist Episcopal Church is 1792, when William Shannon deeded an acre of land to trustees George Kirkman, Daniel Sherwood, Daniel Sullivan, John Coe and William Weatherly.

Francis Asbury became bishop of this new denomination. A strong believer in itinerancy, it is estimated that he traveled 270,000 miles on horseback during his 45 years of ministry in America. One could say he was the original “snow bird.” He preferred to be in the South during the winter months. His journal recorded two visits to Pleasant Garden, where he stayed with Daniel Sherwood, an old friend from Maryland.

As the first Methodist Episcopal congregation in the area, Pleasant Garden became the “parent” of others nearby that are also now United Methodist churches. When children matured and moved away from home, they carried their religion to Tabernacle, organized in 1800; Rehobeth, 1806; Moriah, 1813; Bethlehem, 1825; and beyond our state to Tennessee, Kentucky, Indiana and other westward regions.

Pleasant Garden became the name of a circuit in 1875 that included congregations across southern Guilford and northern Randolph counties. The first minister was Zebedee Rush. Since “traveling preachers” were responsible for large territories to be covered by horseback or buggy, they were at individual churches at the most twice a month. In 1877, J. R. Scroggs moved into the new parsonage near the Pleasant Garden Academy.

The circuit grew smaller over the years, and eventually in 1946 Pleasant Garden Methodist Church became a “station” and had a full time minister, Raleigh A. Hunter. Fifteen ministers separate Hunter from current pastor Mark Weekley.

The first church, built in 1792, was a frame house 24 by 30 feet that stood about the middle of the present cemetery, according to Kennerly’s research. In 1840 it was replaced by a larger house, 30 by 40 feet with a 10-foot pitch that was moved nearer Pleasant Garden Road. “It was weather boarded, ceiled, seated with pulpit and stove.”

The third church building was constructed of handmade brick in 1890. It stood where the present Fellowship Hall is located. In 1921, the one room 40-by-85-foot building was expanded and modified with a new entrance between towers. Thirteen classrooms, a dining room and kitchen accommodated the growing congregation. Thirty years later, a large fellowship hall was attached, which provided more classrooms and a place for community gatherings, scouts and social functions.

The oldest building you see today is the 1965 sanctuary. The fellowship hall and education wing were added in the 1990s.

After writing about buildings, I call this Avery/Marsh verse to mind:

The church is not a building,

The church is not a steeple,

The church is not a resting place,

The church is a people.

Pleasant Garden United Methodist Church is a people who continue to be seekers and servants, grateful that our heritage has led us to this time and place.

N.B. Cheek Jr. took this photograph of Pleasant Garden United Methodist Church and parsonage as the buildings appeared around 1948.

Among old photos saved by members of the W.B. Hunt family is this one that fits C.O. Kennerly’s description of the 1840 Pleasant Garden Methodist United Episcopal Church. It was replaced in 1890 by a larger brick building.

This aerial photo, made by Phillip Way, shows Pleasant Garden in 1969. Pleasant Garden United Methodist Church is shown midway on the left side. The 1920s-era church had not been demolished, but the modern sanctuary is to its right.