GREENSBORO — Legislators aren’t backing down on eliminating teacher tenure, but they are rethinking a key requirement of the law — awarding new contracts and bonuses to teachers who give up the extra job protection.

For now, state law gives school leaders until June 30 to choose 25 percent of eligible teachers to offer new four-year contracts and compounding bonuses in exchange for their tenure. The state is eliminating tenure for all teachers by 2018.

Some legislators said the percentage should be higher. Others opposed tying bonuses to the new contracts. Several said the number is arbitrary.

McCrory has said he wants the law revisited.

His staff is “reviewing the law, especially in terms of execution,” McCrory’s spokesman Ryan Tronovitch said in an email. Tronovitch would not provide additional details.

“That’s a terrible part of the bill, and it doesn’t make sense to me,” Brandon said.

Legislators already are discussing changes such as eliminating the bonuses or lifting the caps on the new contracts. Those discussions could translate into legislation when the General Assembly’s short session starts in May.

Legislators could delay implementation of the law in hopes of securing enough money to award new contracts and bonuses to more than 25 percent of eligible teachers, said Rep. Craig Horn, the vice chairman of the House Education Committee.

Horn and other legislators said the 25 percent reflects the funding that was available at that time.

Other options would be to withdraw the contract requirement from the budget or offer a proposed committee substitute, Horn said.

Dozens of North Carolina school boards have asked the General Assembly to repeal the law but not take back the allocated funding.

The Guilford County Board of Education, Guilford County Schools Superintendent Maurice “Mo” Green and the Durham school board filed a lawsuit against the state on Monday.

They argue the law’s wording is too vague and that implementing the law as written leaves school officials vulnerable to litigation. The lawsuit also argues revoking tenure from vested teachers violates the state and U.S. constitutions.

It would be premature to comment on discussions that legislators might be having before the court weighs in on issues raised in the lawsuit, said Nora Carr, Guilford County Schools’ chief of staff.

Legislators’ concerns with the contracts have come up repeatedly in their discussions.

Senate leader Phil Berger, an Eden Republican, included revoking tenure as one of many elements of his Excellent Public Schools Act. The legislation reflects an idea of rewarding effective teachers while making it easier to dismiss ineffective ones.

“In 2012, the Senate asked school districts across the state for ideas on a pay for excellence system, and their feedback influenced policy to reward nearly 25,000 top-performing teachers statewide,” Berger’s spokeswoman Shelly Carver said in an email.

Most school systems are implementing the law, she said, “and we hope the remaining school districts will likewise embrace additional state funding and the opportunity to reward educators. Our system cannot function if people pick and choose which laws they want to follow.”

Administrators can pick 25 percent of teachers, based on how their students perform, said Tillman, a primary sponsor of Berger’s bill.

“Any principal or superintendent worth his salt or her salt can tell you who their top performing teachers are,” he said. “The big problem is they don’t want to hurt some feelings.”

Tillman said he isn’t tied to the contracts, but tenure won’t be continued.

School leaders are “never going to get out of the fact that you have to rate and evaluate teachers,” he said. “If that job’s too tough for them, they need to look for other work.”

Many educators argue that state law already includes many reasons a teacher can be fired.

McColl said school leaders tell her that better options for improving teacher quality include allocating money for teacher training and for mentor teachers.

“All these things that provide support systems that have been severely lacking,” she said. “That’s what the General Assembly could do. That works.”

A bill based on Colorado’s tenure model — raising the number of years before awarding tenure and revoking it from ineffective teachers — had bipartisan support among North Carolina representatives. The bill didn’t survive the state Senate.

State legislators maintain that eliminating tenure is key for accountability.

“I think the state should honor that commitment,” he said.

Hardister said he doesn’t think the law should tie teacher bonuses to the new contracts.

Horn said members of both chambers want to see if they can find a way to deal with what school leaders say are “detrimental effects” of the 25 percent requirement. “But how that’s going to play out, I don’t know.”

Do Guilford schools have legal standing in tenure lawsuit?

Guilford County's school board is among the plaintiffs fighting a state law that would revoke tenure from vested teachers. 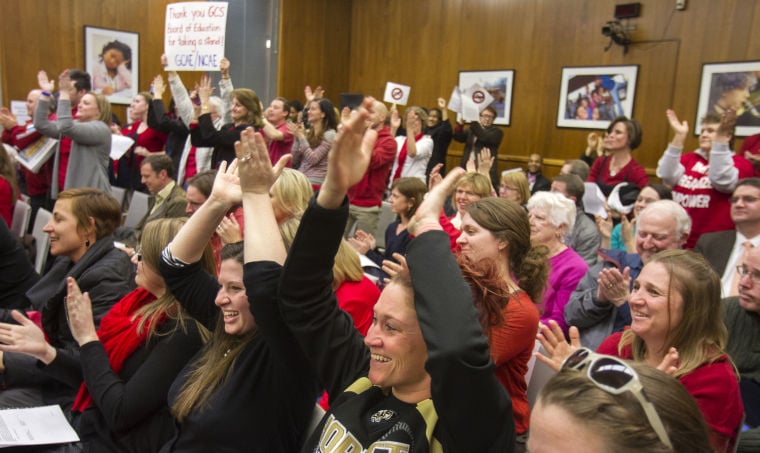 Jessie Norman (foreground, right), a Guilford County Schools teacher and coach, and Hannah Kennedy (foreground, second from right), a Western Guilford High School teacher, react along with others in the audience after the Guilford County Board of Education approved a resolution in February against new provisions of the state's new teacher tenure law. 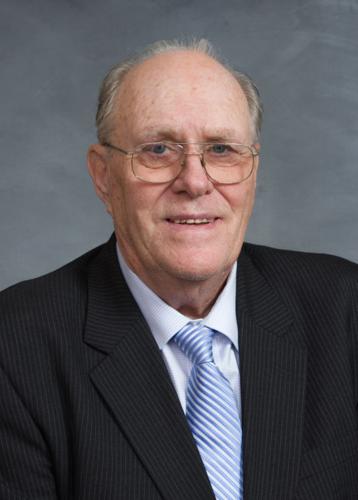 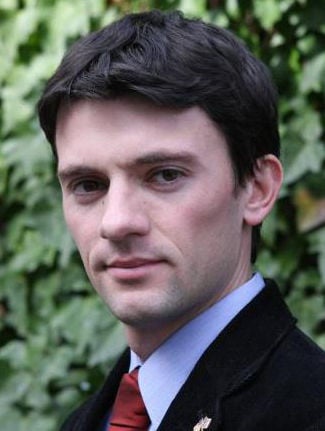 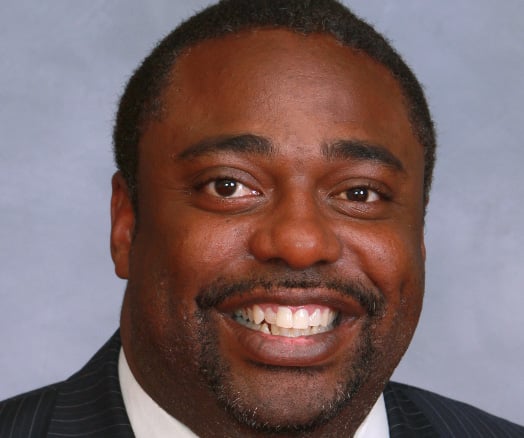