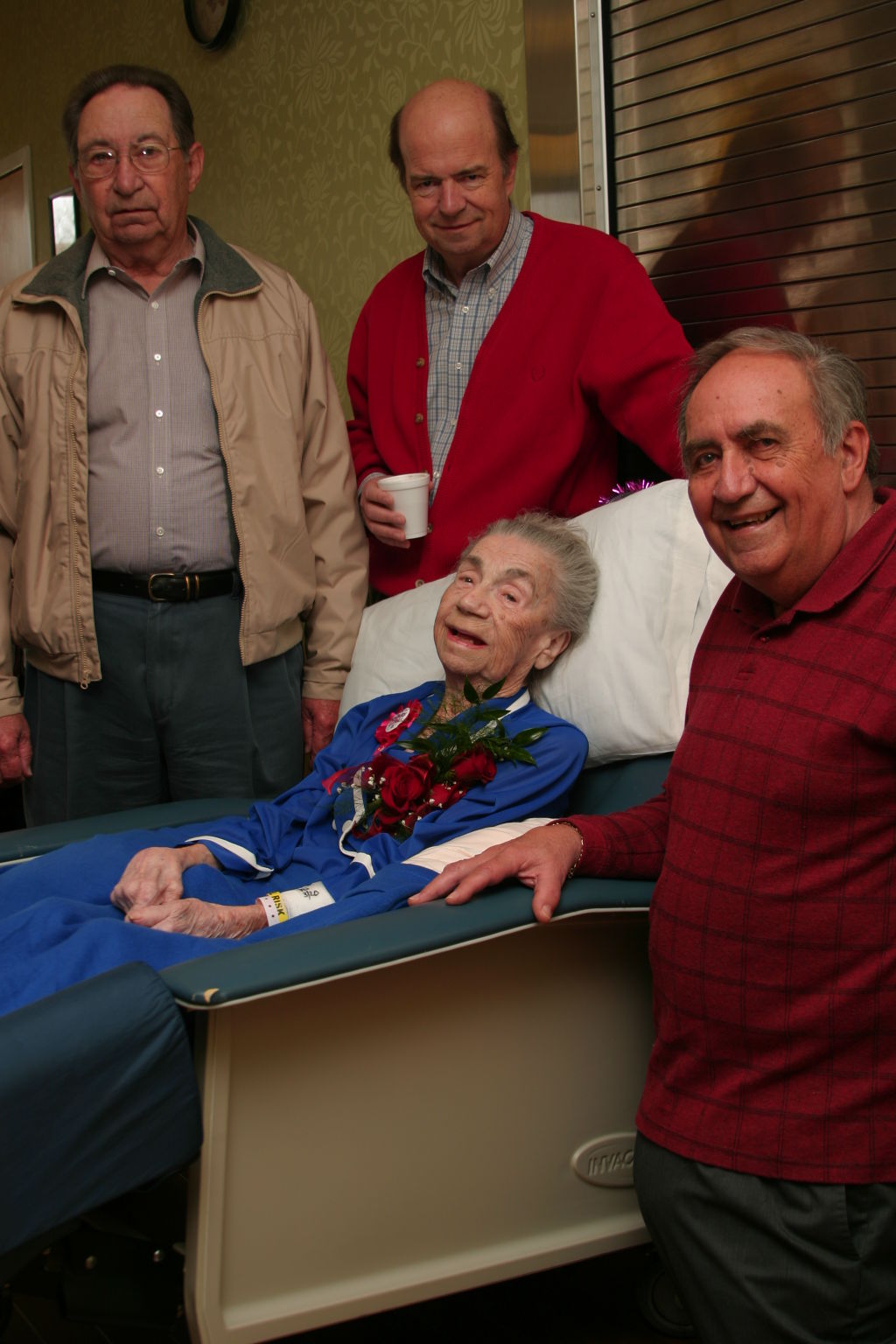 Robbie Rash/Special to the News & Record Kathleen Paschal has three sons, six grandchildren and eight great-grandchildren. Her sons are (from left) Kenneth, J.D. and Garland. 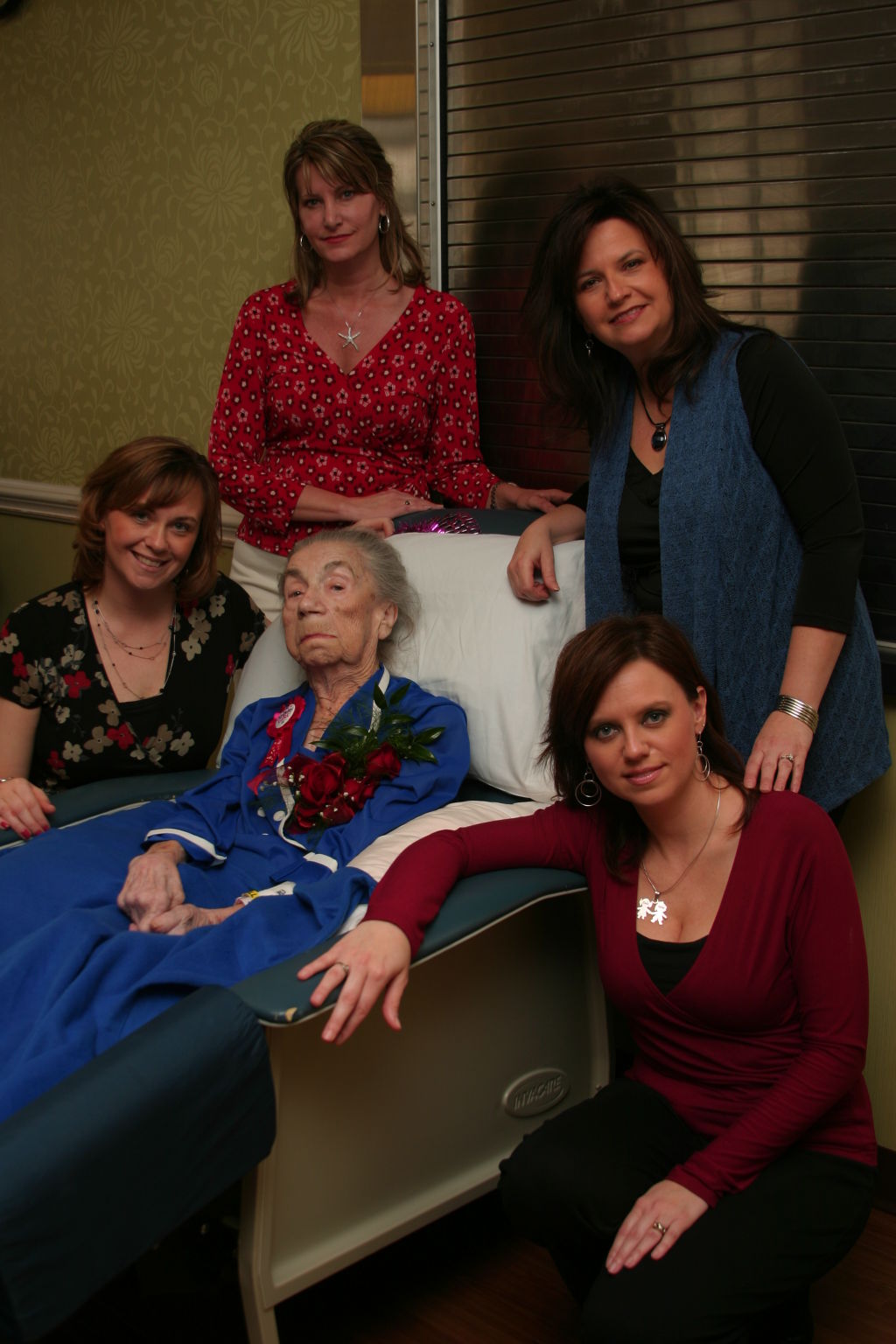 Her grandchildren gave her 100 silk roses for the celebration March 20 to celebrate Paschal reaching the century mark.

The event was held at the Penn Center, where Paschal has lived for the past several years.

She loves receiving cards, and her family made sure she got plenty that day. Not only does Paschal enjoy having the cards read to her, but she also identifies them and remembers who sent them.

A native of Rocking­ham County, Paschal was the oldest of 10 children. She finished seventh grade at Lower Grooms Road School, a one-room schoolhouse, but had to quit to help tend to her younger brothers and sisters.

During the years Paschal attended school, she and her sister, Mildred, took turns staying home to help with twin siblings, Sidney and Sadie. Kathleen went to school one day, Mildred the next. All the Paschal children shared their books.

According to her middle son, Garland, the children walked back and forth to school. They carried a brown bag filled with meat biscuits and sweet potatoes for lunch.

At recess, the boys and girls played separately. The girls made playhouses, outlining them with sticks and rocks. All the children enjoyed playing ball, tag, hopscotch, red rover and jack rocks, which they played with real rocks, Garland said.

As a little girl, Kathleen had to bring water from the spring in a pail. She also brought in wood for cooking on the stove and for the fireplace.

Growing up, Kathleen washed clothes using a scrub board; then she helped her mother iron them using a flat iron heated in the fireplace.

During the summer, she helped her mother can food from their garden.

On Sundays, the Paschal children walked more than five miles to Lick Fork Primitive Baptist Church, now one of the oldest churches in Rockingham County. The original building is still used.

Back then, Kathleen’s grandmother accompanied them. On the long walk home from church, they stopped to eat the lunch they had packed. Sometimes, they got to ride to church in a buggy or wagon.

During the summer, the family attended camp associations.

Because her father, John P. Allen, was a tobacco farmer, Kathleen began working in the tobacco fields at an early age.

“I helped hoe it,” she said, adding with a frown, “but that was hard.” She also helped weed and had to pull the juice-spitting tobacco worms from the leaves.

“Christmas was quite different,” Garland said. Just before the holiday, her father went to Reidsville and bought each child a gift.

He also bought nuts, fruits and candy for everyone.

Her mother, Annie Lea, baked a lot before Christmas. She made many cakes and pies.

Kathleen talked about her mother baking half-moon pies and stacking them on a plate.

Because refrigeration was not available, clothing was removed from dressers and cabinets and the pies were placed in them.

Milk from the family cow was kept in a spring near the house.

When she grew up, Kathleen worked as a cigarette catcher at The American Tobacco Co. until she married Lee A. Paschal in 1932. She was a homemaker the rest of her life.

Since the age of 22, Kathleen has allowed her hair to grow, only trimming and shaping it as it grew.

Kathleen recalled “cooking a lot. I cooked a lot of cakes and pies.”

She also remembered having to chase down a chicken in the yard for Sunday dinners, but she admits she didn’t like killing them.

“I caught them and let somebody kill them,” she said. “I didn’t kill it unless I had no other way.”

The Paschals had three sons: Kenneth, Garland and J.D. Garland is married to the former Geneva Cobb, and J.D. to the former Jan Hanes. Kenneth is a widower.

Most of Kathleen’s six grandchildren and eight great-grandchildren were on hand last week for her birthday party.

“She was an excellent seamstress and made clothes for herself and her children,” Garland said, noting some of the clothes were made from printed feed sacks.

Since she was a homemaker, she was “always there when I came home from school,” Garland said.

He recalls her standing by the old wood stove in the kitchen and cooking all morning.

“She cooks the best pinto beans and corn bread I’ve ever eaten,” Garland said. Chocolate pudding made with cocoa was her favorite thing to cook.

“All these things were cheap to cook, and times were hard in those days,” Garland said.

“On Sunday morning, the house smelled of chicken frying for lunch.

“My mom was always an early riser and had this special meal ready for the family,” he said. “This was only once a week because that was all we could afford.”

After their evening meals, Garland said, the family gathered on the front porch and talked.

Ann Fish is a Reidsville native but has lived in Eden since 1979. Contact her at annsomersfish

Robbie Rash/Special to the News & Record Kathleen Paschal has three sons, six grandchildren and eight great-grandchildren. Her sons are (from left) Kenneth, J.D. and Garland.