GREENSBORO — A Greensboro man pleaded guilty today to defrauding consumers and the federal government’s relief programs through COVID-19-related schemes, according to a news release from the U.S. Department of Justice.

Brandon Lewis, 34, of Greensboro pleaded guilty to two counts of wire fraud and one count of making false statements to the Small Business Administration, the Justice Department said. His three schemes occurred between March and July this year. 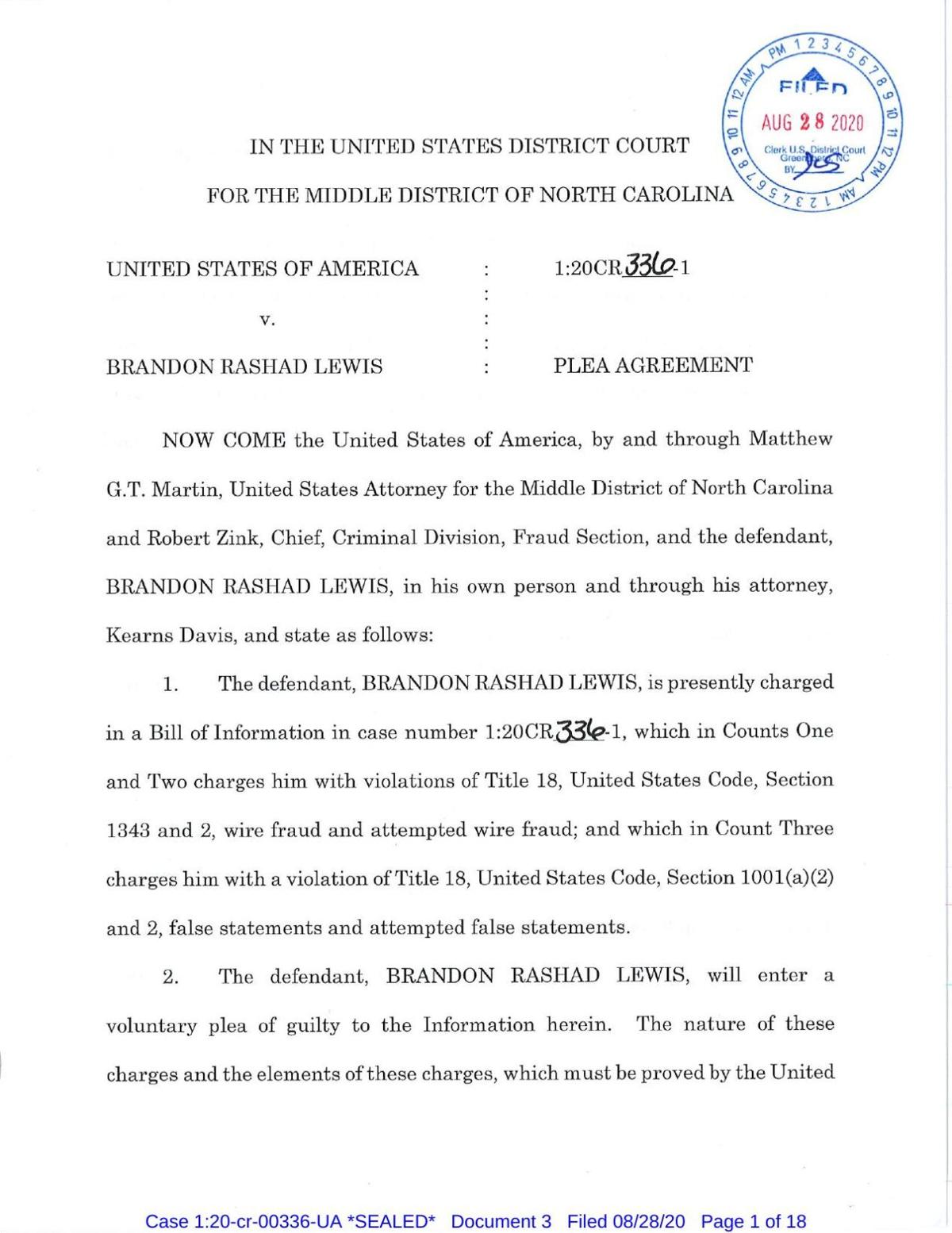 As part of his guilty plea, the Justice Department said Lewis admitted that he created a so-called “COVID-19 Relief Fund,” which he managed and oversaw as president and founder of Lewis Revenue Group LLC.

Lewis promised small business owners between $12,500 and $15,000 in exchange for an upfront “reservation” fee of between $995 and $1,200, the Justice Department said. Lewis falsely claimed that the fund had up to $250 million available for small businesses and provided a link for applicants to “purchase a reservation now.”

He also created the so-called “American Relief Fund,” offering $5,000 grants to “every American affected by COVID-19," according to Justice Department. Lewis never had nor distributed any money through either of the entities.

Between April and May, the Justice Department said Lewis defrauded small business owners of more than $100,000 through this scheme.

Lewis also admitted that in mid-March, as stay-at-home orders across the country began, he set up a website for “Home Kitchen Goods,” where he claimed to sell pandemic-critical goods like hand sanitizer, disinfectant wipes, paper towels and toilet paper.

Between March 20 and March 24, Lewis received more than 8,500 orders totaling more than $400,000, but never had nor delivered any of the promised goods, the Justice Department said.

“This is another example of greed controlling one’s actions," Special Agent in Charge Matthew D. Line said in the release. "In a time of crisis and vulnerability in our country, Mr. Lewis promised assistance and help, but delivered more heartache and anxiety.”

Between April 1 and June 19, Lewis also reportedly lied to the SBA by fraudulently applying for and obtaining multiple loans and advances under the SBA’s Economic Injury Disaster Loans program.

Lewis' sentencing is scheduled for Nov. 30. People who believe they are a victim in this case are asked to contact the Fraud Section’s Victim Witness Unit at 888-549-3945 or via email at victimassistance.fraud@usdoj.gov.

His plea follows the arrest of a Trinity man last week on similar charges.

Redfern, who was charged with wire fraud and bank fraud, sought money from the Economic Injury Disaster Loan program and the Paycheck Protection Program under the Coronavirus Aid, Relief and Economic Security (CARES) Act, the Justice Department said.

Redfern allegedly applied for two EIDL loans and a PPP loan between April and June through a company called Wilder Effects that he formed in January. The Justice Department said Redfern used false documents for the PPP loan application, including a fake IRS filing. Redfern also is accused of withdrawing the loan proceeds in cash and transferring them to his personal bank account.

The Justice Department said it recovered about $402,000 of the loan proceeds.

Anyone with information about fraud involving COVID-19 can report it by calling the Justice Department's National Center for Disaster Fraud hotline at 866-720-5721, or via an online form at www.justice.gov/disaster-fraud/ncdf-disaster-complaint-form.

The 44-year-old man is accused of running over the ranger with his motorcycle.

In each case officers found one person who had been injured. All three people were taken to a local hospital but no information was available on their conditions, police said in a series of news releases.

The release of a new documentary series has put the Jeffrey MacDonald murder case back in the national spotlight.

JULIAN — The Guilford County Sheriff's Office is seeking help from the public in identifying a robber in a home burglary, according to a news …

The residential burglaries occurred during daytime hours on Monday and Tuesday on Alamance Church, Coble Church and Ledford roads, according to the sheriff's office.

Officers responded about 3:30 p.m. to a report of an aggravated assault in the area of 1400 Glenwood Avenue, police said in a news release. They found one person injured. That person was taken to an area hospital. Police did not release any more information about the person, including their condition.

Durham man charged in High Point larcenies that led to one suspect and a police officer exchanging gunfire, police say

Police are still investigating, but have determined that several cars were broken into through the night.