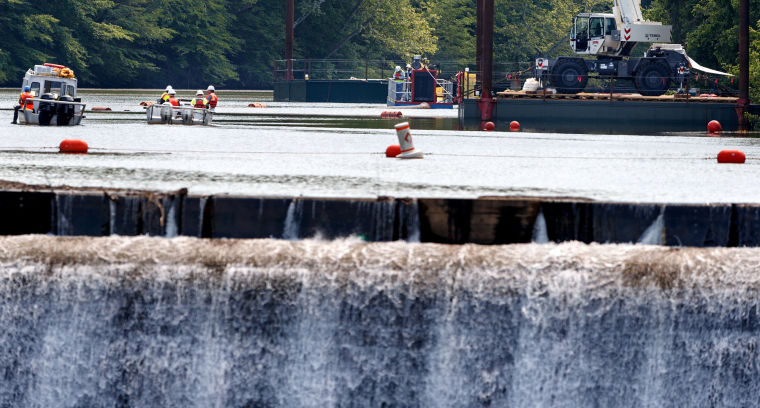 File. Duke Energy officially begins its clean up of the Dan River from the coal ash spill on Monday, May 12, 2014, in Danville, Va. 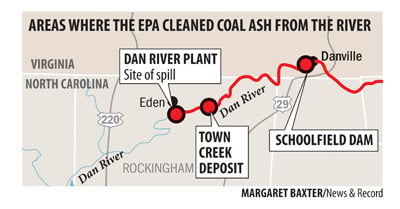 Officials suspended those efforts after removing about 3,000 tons of mixed ash and sediment from three, sandbar-like deposits along the river and from water treatment plants in two, downstream Virginia cities, Danville and South Boston.

Danville emerged as the epicenter of the spill’s impact, about 20 miles downstream from Duke Energy’s retired Dan River Steam Station near Eden, where as much as 39,000 tons of ash escaped through a ruptured pipe Feb. 2.

The river has largely returned to normal from the spill, leaving only a few, obvious sites of potential problems that officials will continue monitoring for the next year or so, said Myles Bartos, an on-scene coordinator Environmental Protection Agency.

“We haven’t seen any change since very early on,” Bartos said, noting that the river stabilized relatively soon after the spill and became suitable for recreational use.

Coal ash contains metals and similar substances that can cause environmental problems or threaten human health.

Drinking water from the river was never in any danger of contamination in the aftermath of the spill or during cleanup efforts, Bartos said.

The EPA soon will give up leased space in Danville where it has maintained a satellite office, and Bartos and another EPA coordinator assigned to the Dan River cleanup are moving on to other assignments, he said.

Bartos said he didn’t want people to think the EPA is leaving the job half done. But the agency and its cleanup partners have reached at least a temporary stopping point because careful inspections during the last six months failed to find any other significant deposits, he said.

Bartos said testing will continue along the river, but probably not at the monthly rate officials have been collecting samples.

He added that removal efforts could be resumed relatively quickly if future, chemical sampling detects a turn for the worse at some newly emerged problem spot.

“I feel confident that is not going to be needed,” Bartos said of a renewed cleanup triggered by an uptick in coal ash contamination somewhere in the river. “I don’t think that is going to happen in the future, but certainly not in the near future.”

But federal officials won’t completely close out the cleanup effort until they feel absolutely sure no further problems linked to the spill could occur, he said.

The residue of coal burnt to fuel power plants contains potential contaminants such as arsenic and selenium that can cause problems in the natural world, including genetic damage to fish and wildlife. The ash is mobile and quick to merge with sediments in the river bottom, where environmental scientists say it can re-emerge to cause problems.

Duke Energy will work with the U.S. Fish and Wildlife Service and environmental officials from both Virginia and North Carolina to keep looking for any damage the spill might cause to natural resources, in addition to checking for new ash deposits, said Duke spokesman Jeff Brooks.

“We remain committed to the Dan River and will continue to monitor it for quite some time,” Brooks said. “We will continue to watch the river and any deposits that might accumulate in the river. But at this point, there have been no other sites that have been confirmed for removal.”

The recovered coal ash represents only a small fraction of what leaked. Flow patterns in the river dispersed much of the spill along the first 20 miles downstream from the Eden plant, Bartos said.

But they left substantial deposits at only three spots in the open river; near the Duke plant where the spill occurred, about two miles downstream at Town Creek in Rockingham County, and just upstream from Schoolfield Dam in Danville.

Duke contractors retrieved about 2,500 tons from the largest deposit near the Danville dam in a complicated, seven-week process they finished July 3.

They removed about 175 tons in a much smaller deposit from a sandbar at Town Creek near Eden in a shorter, less complex effort they finished June 30.

Filters at the two Virginia water plants caught about 320 tons of ash and sediment. And Duke removed a relatively tiny amount deposited right at the plant in March.

Trucks hauled all but about 15 tons of the recovered ash-sediment mixture to the Upper Piedmont Regional Landfill near Rougemont, North Carolina for safe disposal.

The relatively small amount taken from the river at the plant shortly after the spill was returned to the coal ash pond after the ruptured pipe was plugged, the EPA said in a cleanup report it released Tuesday.

The bill in response to the massive ash spill into the Dan River at Duke Energy's plant in Eden.

File. Duke Energy officially begins its clean up of the Dan River from the coal ash spill on Monday, May 12, 2014, in Danville, Va.