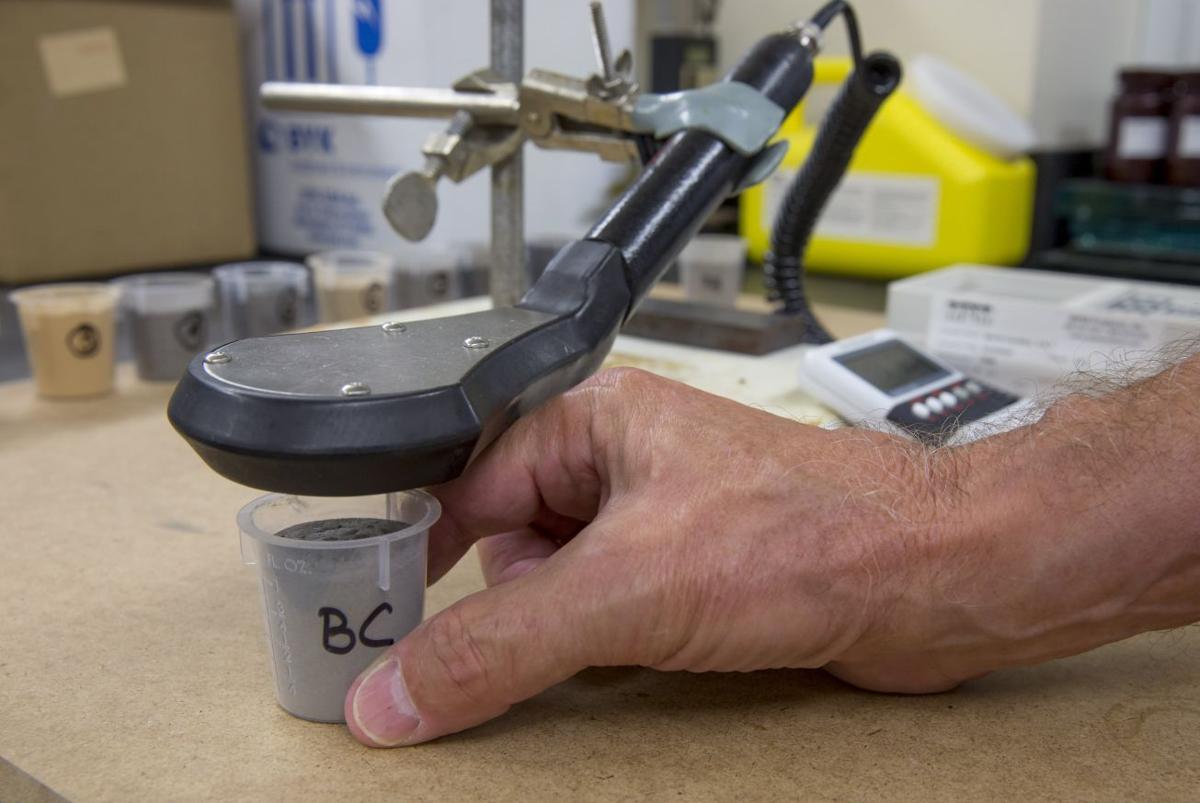 N.C. A&T’s Dr. Kunigal Shivakumar and researcher Wade Brown use a geiger counter to test coal ash for radioactivty levels after a local environmentalist raised concerns about the safety of using coal ash in building materials in a photo taken in Greensboro, NC on July 1, 2016. 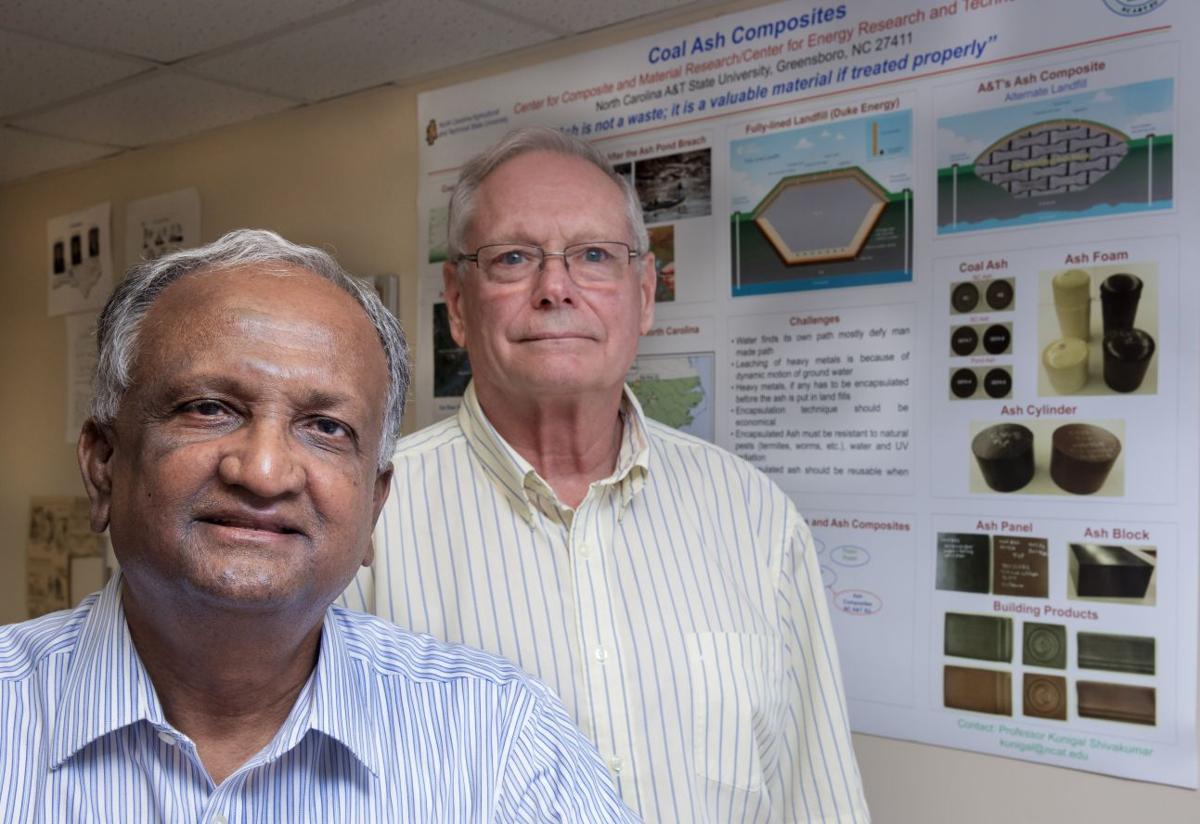 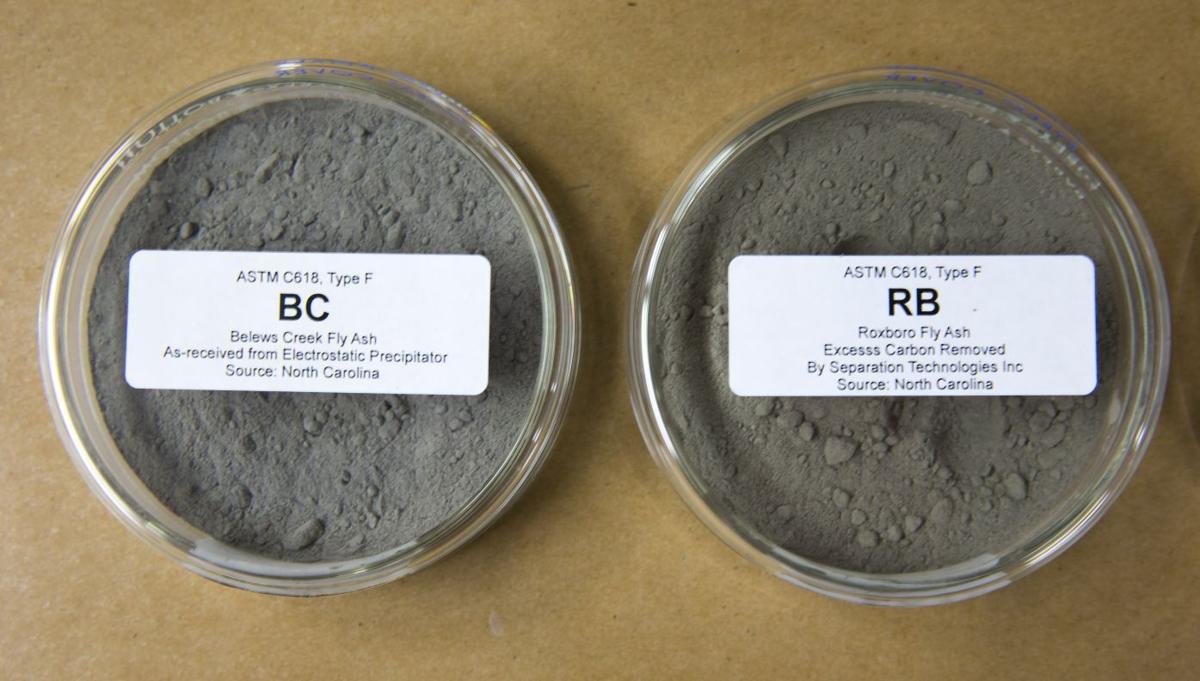 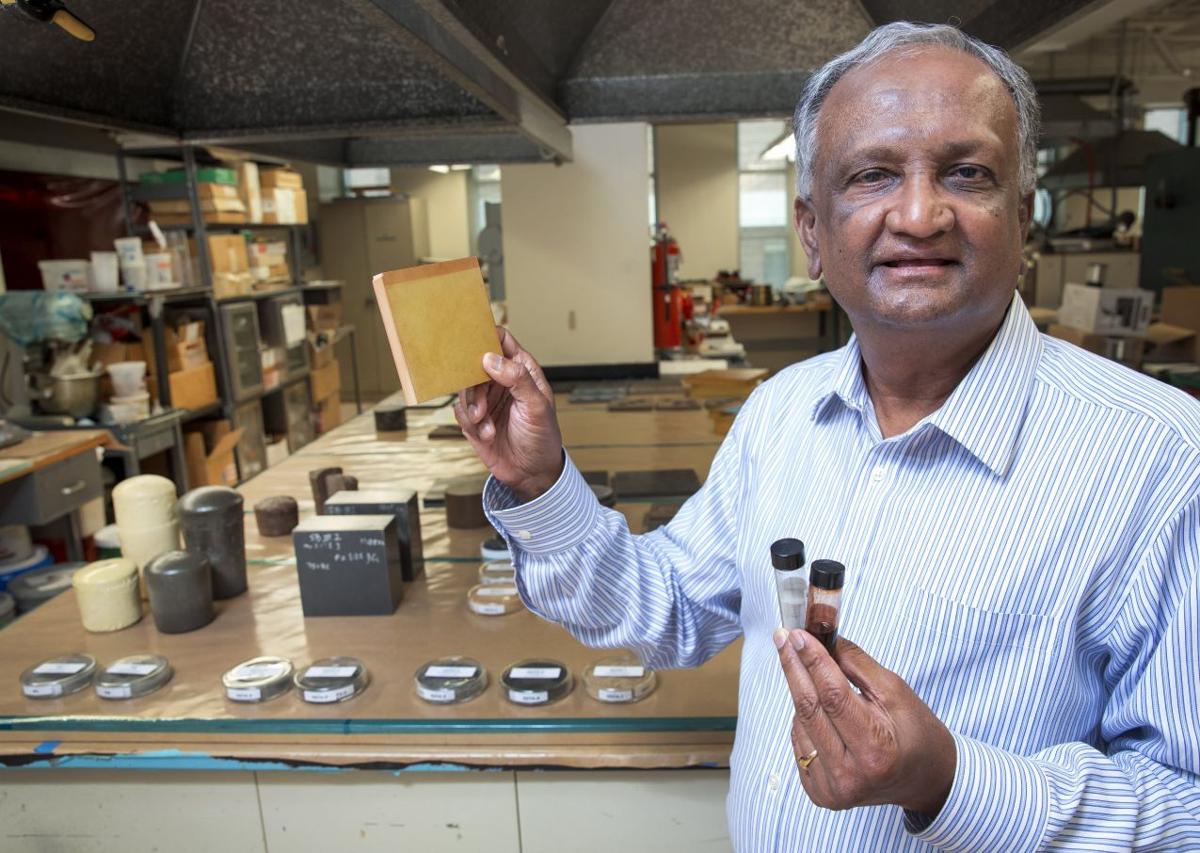 Kunigal Shivakumar, the director of N.C. A&T’s Center for Composite Materials Research, shows a sample of the type of lightweight building materials that can be created from a mixture of coal ash and polyurethane. 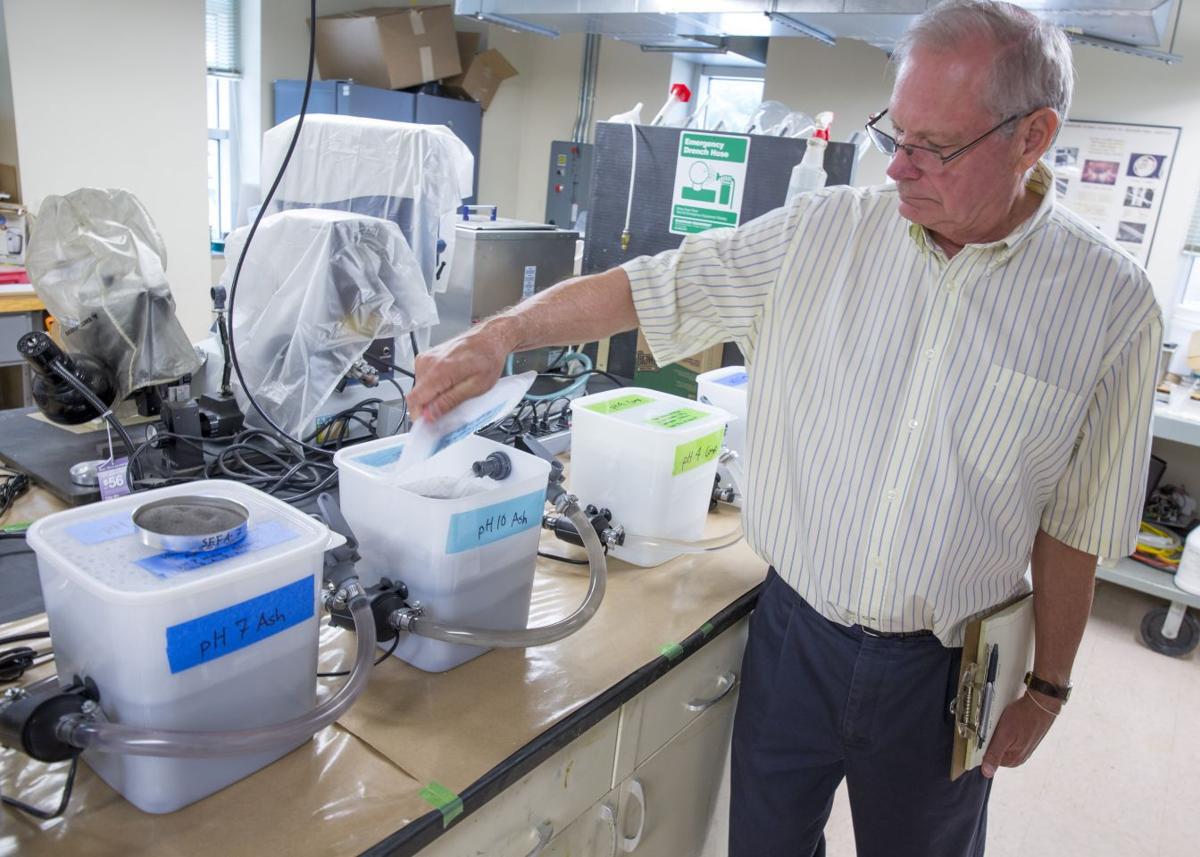 Wade Brown, a chemist and patent holder on parts of the polyurethane process, examines one of the 10 leaching stations researchers used to test coal ash samples by running water with varying degrees of alkalinity through them. 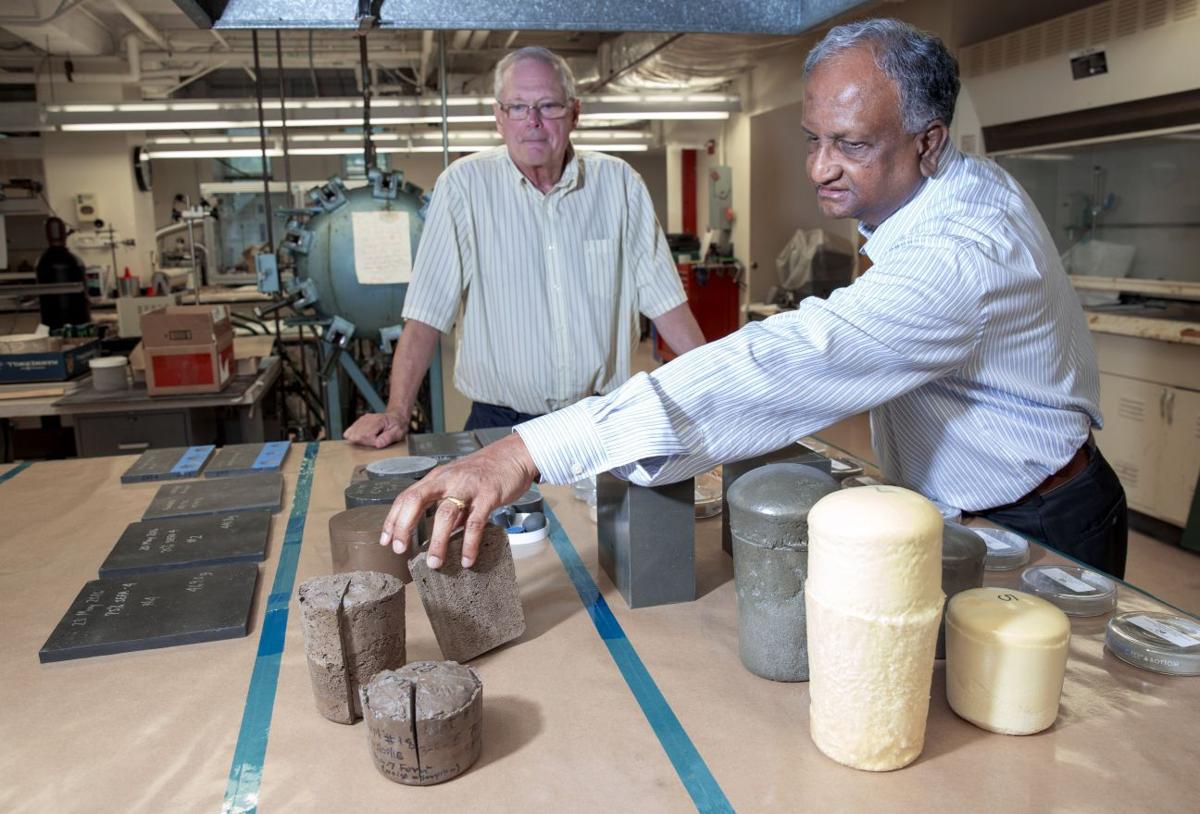 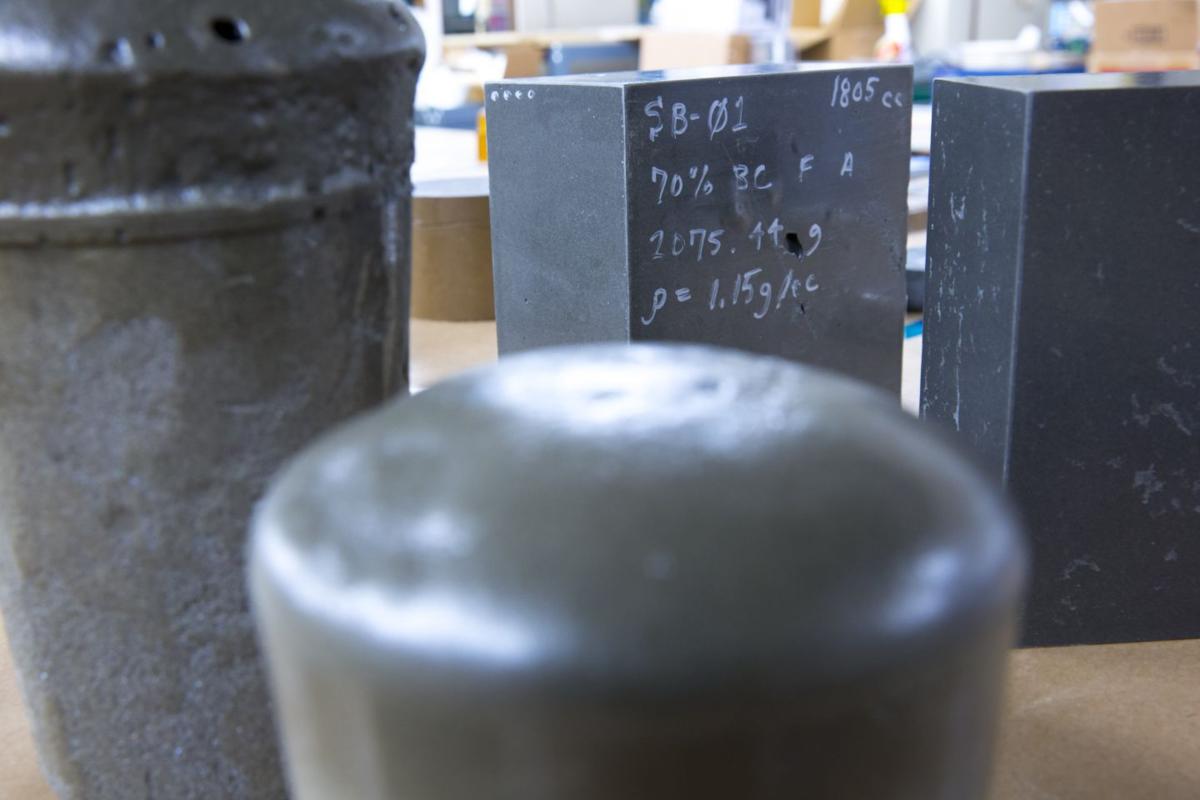 GREENSBORO — Researchers at N.C. A&T say they have found a way both to store coal ash underground for decades without harming the environment and to recycle it into a variety of tough, lightweight building materials.

The findings at the university’s Center for Composite Materials Research promise to lift the powdery, grayish material’s standing in the world, said Kunigal Shivakumar, the director of the on-campus center.

“This coal ash is not waste,” Shivakumar said. “It is a valuable resource if we handle it properly. ... We have a problem, and yes, we have a method of solving the problem.”

The new technique involves mixing large quantities of coal ash with polyurethane to make a substance that could be pressed into a range of forms to make a variety of building supplies, such as exterior siding, decking and interior moldings.

Or for long-term storage it could be shaped into large blocks that would avoid the necessity of burial in a costly, lined landfill by permanently entrapping heavy metals and other coal ash pollutants within the plasticized matrix, Shivakumar said.

If needed for manufacturing years later, the blocks could be ground into powder once again, mixed with another dose of polyurethane and recycled in newly manufactured products, he said.

Coal ash provides bulk for the new material, but it remains chemically inactive within the polyurethane mixture, said Wade Brown, a Mooresville chemist and a patent holder on parts of the polyurethane process.

“The urethane does the work,” said Brown, who helped the A&T team in perfecting the new applications. “The ash is just sort of sitting there, along for the ride.”

The research project emerged from a two-year grant of $400,000 that the center received through state government to delve into coal ash’s prospects for “beneficial reuse.”

That grant came on the heels of publicity that the center received in mid-2014 about some of its earlier, groundbreaking research into coal ash for the U.S. Navy. Shivakumar, other scientists and student researchers had been using it make a composite material that could be deployed inside ships as fire- and blast-resistant wallboard.

North Carolina became a focal point for coal ash news and controversy that year after a major ash spill into the Dan River from a Duke Energy ash storage basin at the retired Dan River Steam Station near Eden.

Shivakumar said that state Sen. Trudy Wade (R-Guilford) called him after word got out about A&T’s nautical coal ash product, known as Eco-core, to discuss the possibility of a grant for broader-based coal ash studies.

“They said, ‘Why don’t you see if you can do anything with coal ash to make it a value-added product?’ ” Shivakumar said of his conversations with Wade and other state officials.

Eco-core drew praise, but it had the drawbacks of being heavy, requiring high-temperature processing and using only a very specific type of coal ash.

By contrast, the new polyurethane mixture is comparatively light, needs no external heat to take shape and works with any number of ash types directly from a coal-fired plant or scooped from the bottom of a storage pond.

The fact that the mixture of coal ash and polyurethane forms without external heat is important because it makes the material much less costly to produce and, as a result, more economical for manufacturers. That also makes it easier on the environment, Shivakumar said: “This is clean technology.”

Although the new research appears promising, he acknowledged it remains to be proven that the compound is commercially viable: “It needs a pilot project to demonstrate (that).”

Shivakumar said he and his team drew some of their inspiration from a YouTube video that showed several students in India working with polyurethane to make a variety of finished products. They asked themselves, “What would happen if someone blended coal ash into such a compound?”

They eventually found that when stirred together with a mixer, the coal ash blended seamlessly with the polyurethane, distributing itself evenly throughout and gelling into a versatile product that might be the stuff someday of railway ties and utility poles. The new composite mixture includes up to 75 percent coal ash, with the potential to go as high as 80 percent, Shivakumar said.

He, Brown and their colleagues used ash from two coal-fired Duke Energy plants in their research — Belews Creek near Walnut Cove and Roxboro in Person County — as well as samples from some South Carolina utilities.

But Shivakumar said the research team didn’t have any other contact with Duke Energy, charting its course and testing the results completely independent of the Charlotte-based corporate giant.

Shivakumar said another major part of the materials research center’s coal ash study aimed to ensure the new material would be safe and work as advertised.

Among other things, the team looked into the trace amounts of radioactive elements found in coal ash, such as uranium and thorium, that environmentalists have raised as a possible issue. Center researchers showed that the ash did not emit harmful levels either in its raw form or within the polyurethane mixture, Shivakumar said.

But after decades of coal-fired power production, the nation is awash in millions of tons of stored coal ash, far more than can be recycled without long-term storage or disposal. That has triggered disputes between environmental groups and Duke Energy about whether the ash needs to be buried in lined landfills to prevent leaching of such potentially toxic ingredients as arsenic and selenium into groundwater or nearby streams.

Instead, the A&T researchers envision encapsulating coal ash within their polyurethane product in large blocks that would not require a lined landfill and that might be tapped years later as a manufacturing resource.

They vetted their polyurethane mixture by submerging it for weeks at a time in test basins to suggest that the material could be stored like that indefinitely without releasing any of the ash’s problematic metals and other potentially harmful ingredients.

“They don’t dissolve in water. They don’t absorb water,” Shivakumar said of the test blocks.

More work remains before the center’s discoveries move from the laboratory to the manufacturing floor.

But Shivakumar is optimistic.

“We can address this problem very effectively,” he said of North Carolina’s coal ash crisis, “and it will be a model for our state.”

“And the world,” Brown added.

They say the most promising market for safely re-using coal ash in manufactured products is large structural pieces, ranging from the cross arms on utility poles to building blocks for retaining walls.

N.C. A&T’s Dr. Kunigal Shivakumar and researcher Wade Brown use a geiger counter to test coal ash for radioactivty levels after a local environmentalist raised concerns about the safety of using coal ash in building materials in a photo taken in Greensboro, NC on July 1, 2016.

Kunigal Shivakumar, the director of N.C. A&T’s Center for Composite Materials Research, shows a sample of the type of lightweight building materials that can be created from a mixture of coal ash and polyurethane.

Wade Brown, a chemist and patent holder on parts of the polyurethane process, examines one of the 10 leaching stations researchers used to test coal ash samples by running water with varying degrees of alkalinity through them.