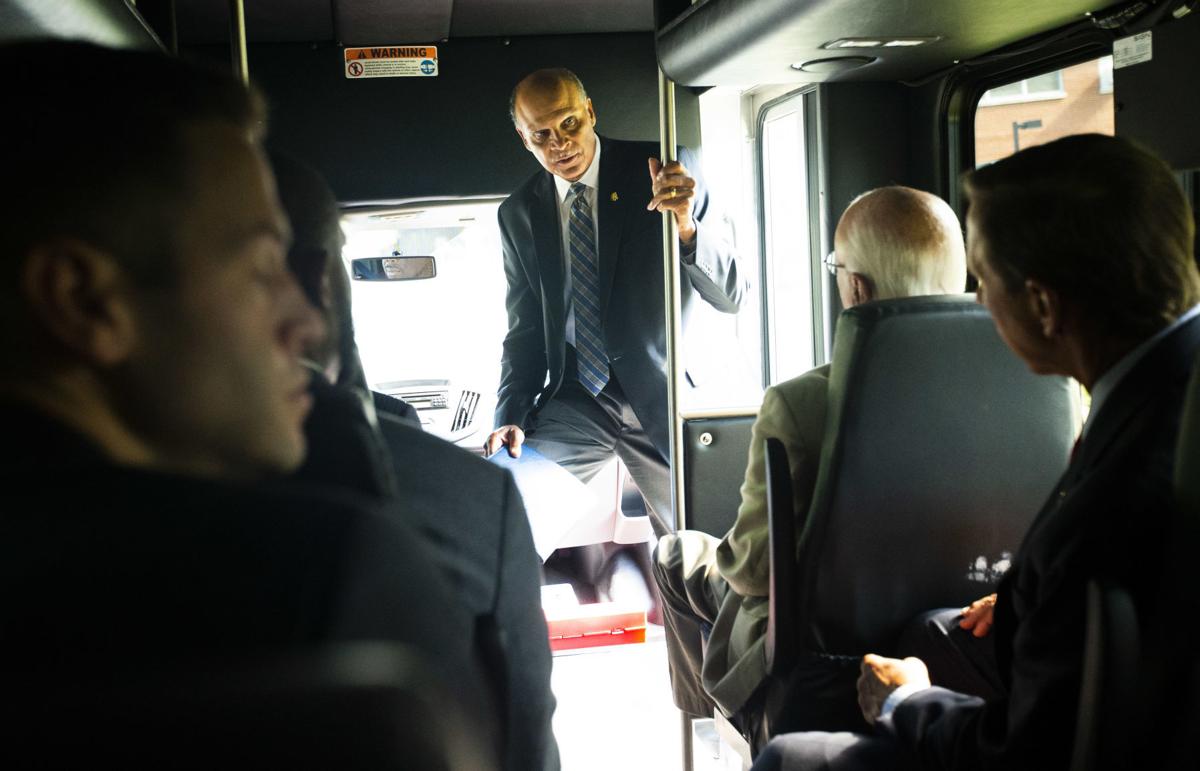 N.C. A&T Chancellor Harold Martin talks with North Carolina lawmakers on a shuttle bus during a tour of some campus facilities in Greensboro on Tuesday. 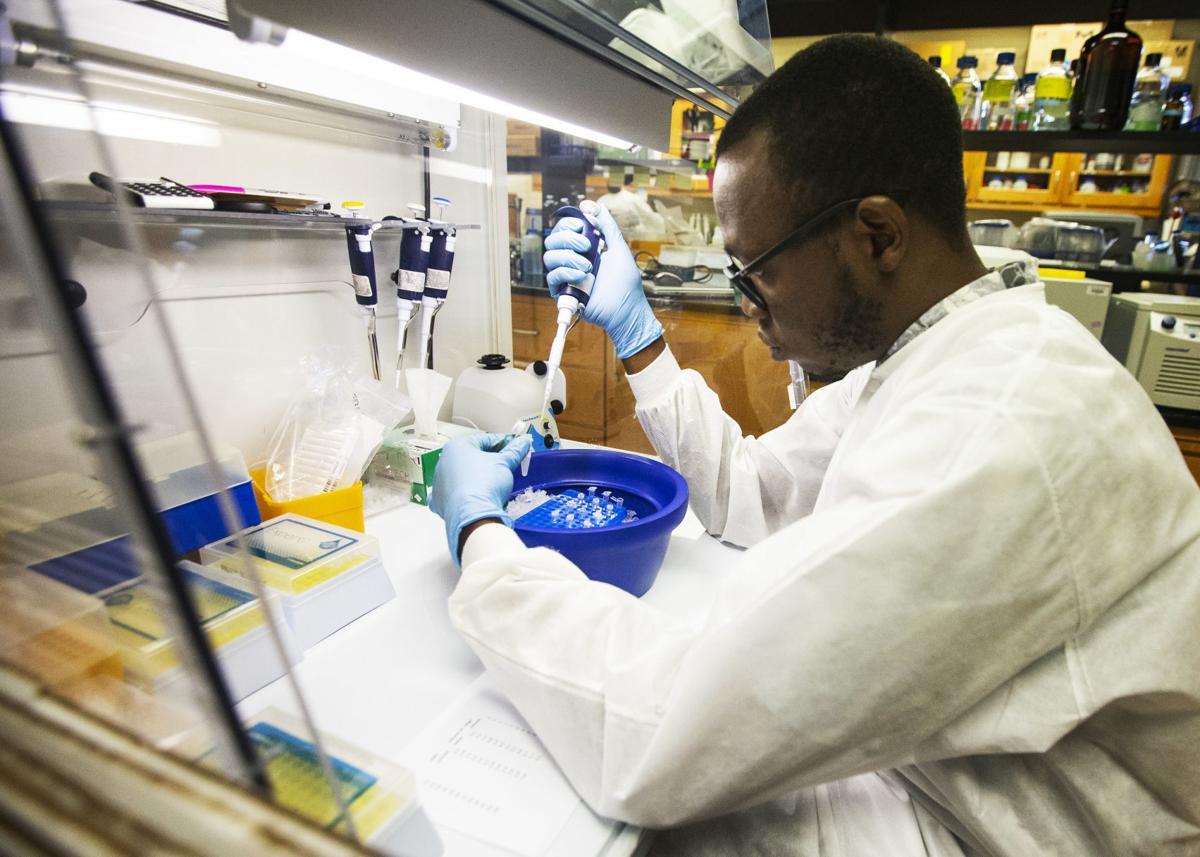 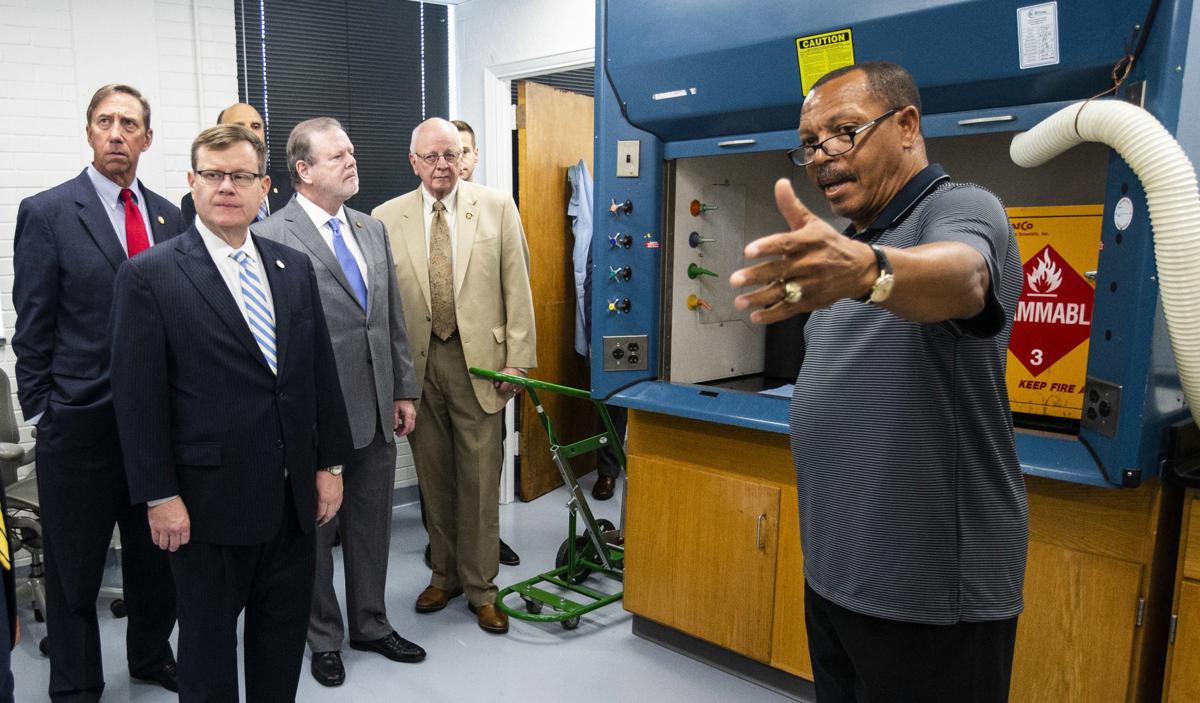 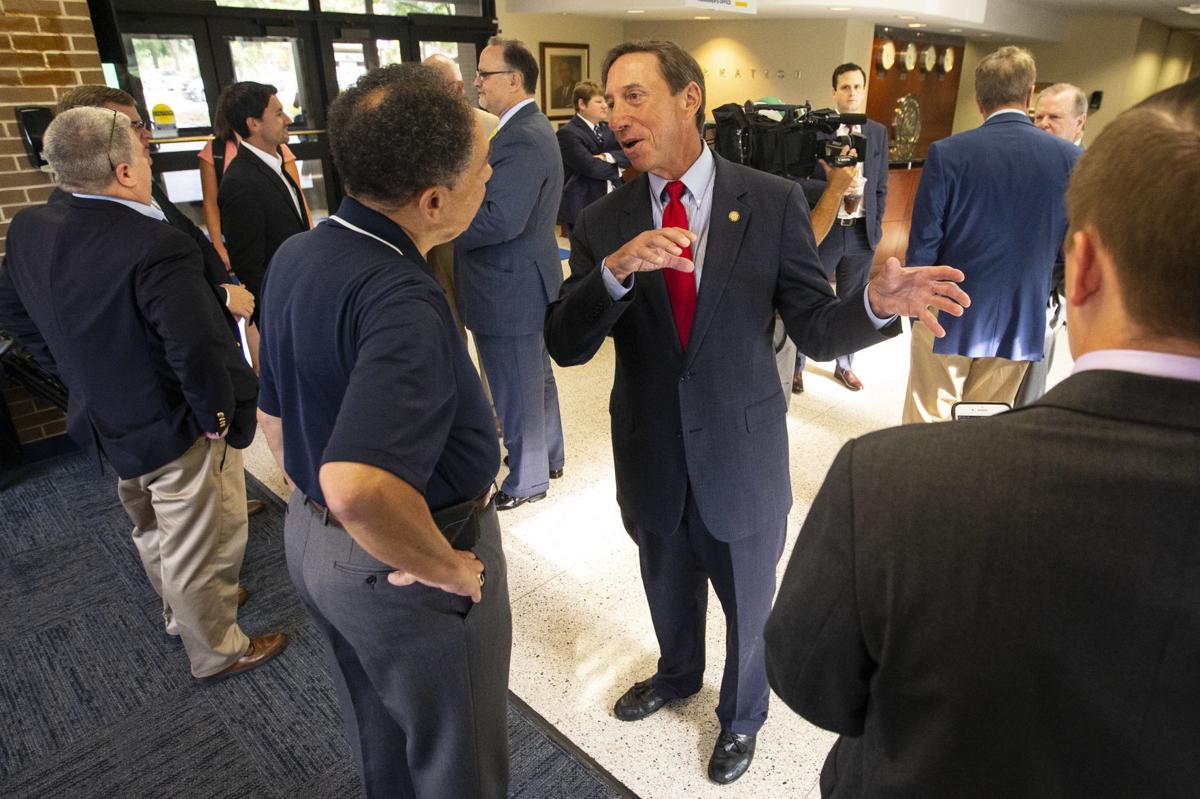 N.C. A&T Chancellor Harold Martin talks with North Carolina lawmakers on a shuttle bus during a tour of some campus facilities in Greensboro on Tuesday.

GREENSBORO — On a hot and humid August morning, several state legislators wound their way through some agriculture labs at N.C. A&T on Tuesday and ended up in a lecture hall.

Except for the video projector hanging from the ceiling, the 250-seat auditorium inside Carver Hall looked like something straight out of 1955, when the building opened. The wood seats are hard and narrow. The foldaway desktops aren’t big enough to hold a laptop computer.

And, oh, yeah: The room has no air conditioning.

“It’s hard to learn when it’s hot,” said Antoine Alston, an associate dean and professor at A&T’s College of Agriculture and Environmental Sciences. “When students aren’t comfortable, they’re not going to learn.”

A delegation of state legislator led by N.C. House Speaker Tim Moore toured both A&T and UNCG on Tuesday. Moore said he is visiting state universities and other state facilities “where we’re making a significant investment. We want to bring attention to it. … We want to let (chancellors) know that we’ve got their backs.”

The stated purpose of Tuesday’s tour was to see two universities where the legislature plans to spend $120 million in new money over the next two years. Left unsaid is that money for two big projects — $84 million to renovate UNCG’s library and $18.5 million to overhaul Carver Hall — remains in Raleigh because Gov. Roy Cooper vetoed the GOP-drafted state budget in late June.

As the state budget stalemate closes in on 50 days, Moore has already taken similar messages to UNC-Charlotte, East Carolina University and Elizabeth City State University. Other stops have included a community college and the N.C. Aquarium at Fort Fisher, which will get $5 million for repairs in the state budget plan. Moore said projects like these are crucial to state and regional economic and cultural development.

A&T and UNCG were the fourth and fifth university stops on Moore’s statewide swing. N.C. Senate leader Phil Berger of Eden joined Moore on the A&T leg of Tuesday’s tour. Four other legislators came along for one or both stops: Rep. Jon Hardister of Whitsett, Reps. Cecil Brockman and John Faircloth of High Point, and Sen. Rick Gunn of Burlington, whose district includes the eastern half of Guilford County.

Brockman was the only Democrat in the group. He’s also the target of a billboard campaign by a liberal group that suspects Brockman and some other Democrats might side with Republicans to override Cooper’s veto.

The state budget proposal has even more for the university: $7.5 million a year for the next two years to expand its doctoral programs, and another $1.6 million annually so its Cooperative Extension program can get federal grants.

AT UNCG, there was just one stop: Jackson Library, which the university hopes to renovate and expand. The library opened in 1950 and a nine-story tower added in 1973. Since then, UNCG’s enrollment has tripled.

UNCG officials said the library gets about 1.25 million visitors a year, making it the busiest building on campus. On peak days, 10,000 students, professors and others use it. The problem is, UNCG leaders say, it can seat only about 1,000 people. The library tower doesn’t have a fire-suppression system. The entire building lacks enough group study spaces, modern technology and conveniences, such as enough electrical outlets for all of the laptops and cellphones students have.

The deadlock in Raleigh has the A&T and UNCG projects on hold. The Republican-controlled legislature approved a budget plan June 27. Cooper, a Democrat, promptly vetoed it the next afternoon.

The governor countered with what he called a compromise proposal that, among other things, expands Medicaid coverage, gives teachers bigger raises than the legislature’s plan and cuts a proposed corporate tax break favored by the GOP.

Republicans, meanwhile, are holding fast to their plan. They’re seeking at least seven House Democrats and one Senate Democrat to help them override the governor’s veto.

The two sides have sniped at each other on social media and through news releases. Last week, 51 of the 55 Democrats in the House sent a letter to Moore and Berger saying that they’re “committed to sustaining” Cooper’s veto and called on the two GOP leaders to negotiate with the governor.

“We understand (the budget is) a public process in North Carolina. Our job isn’t to worry about that,” Gilliam said. “Our job is to hope they can come up with something we can all live with.”

The Syllabus: Higher ed and the N.C. compromise budget

The N.C. House and Senate on Tuesday dropped their compromise budget — that is, the mash-up …

The Syllabus: What’s next for UNCG’s library?

N.C. A&T joins other state universities in calling for a state budget

At least 10 of the UNC System's 17 schools have approved similar resolutions.