At both ends: Guilford County Schools' lowest and highest poverty elementary schools are missing many kindergartners
0 comments
Share this
{{featured_button_text}}
1 of 2 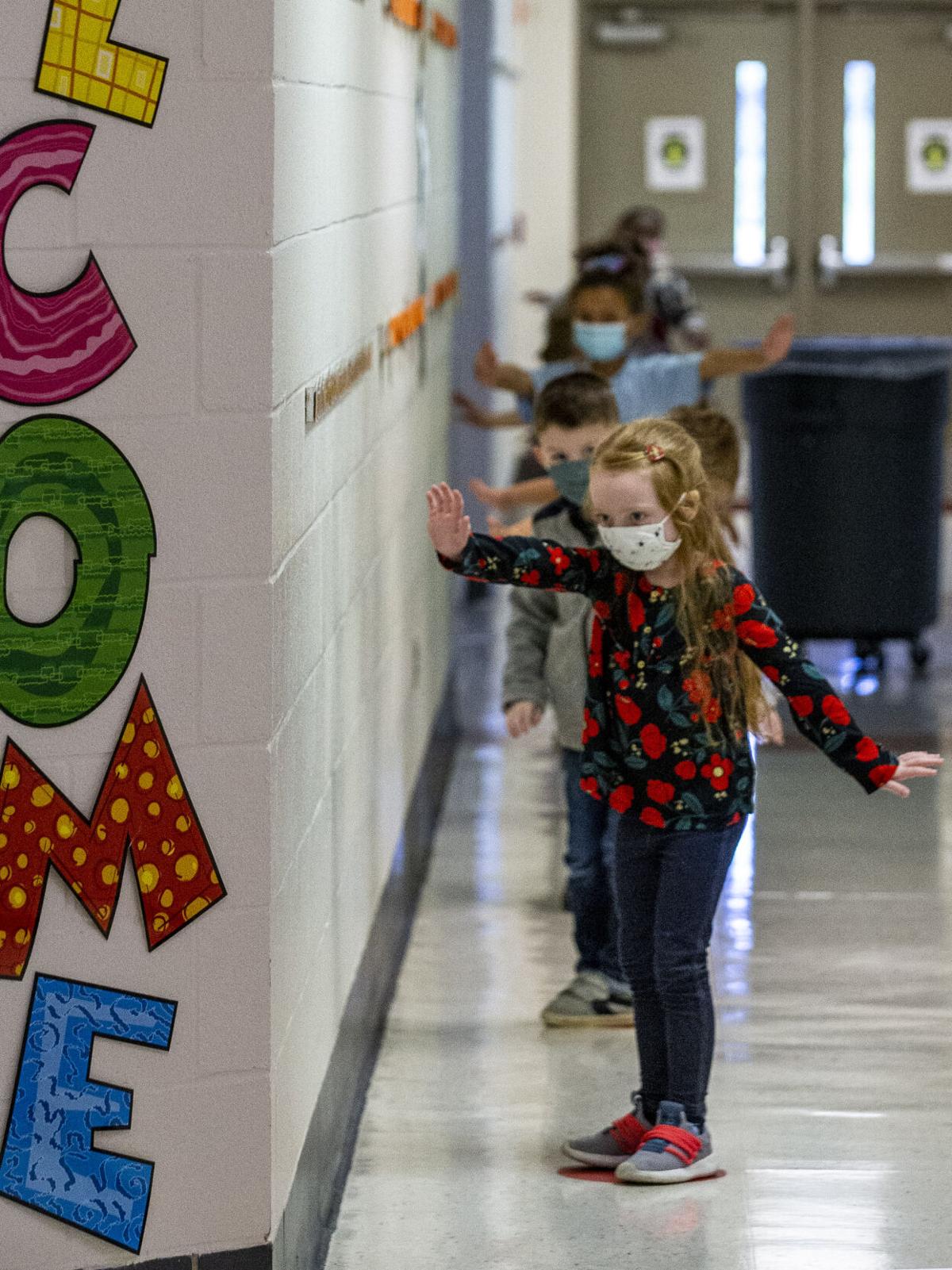 Isla Nuss and her kindergarten classmates spin around with their arms out to make sure they are social distancing at Jesse Wharton Elementary on Monday. 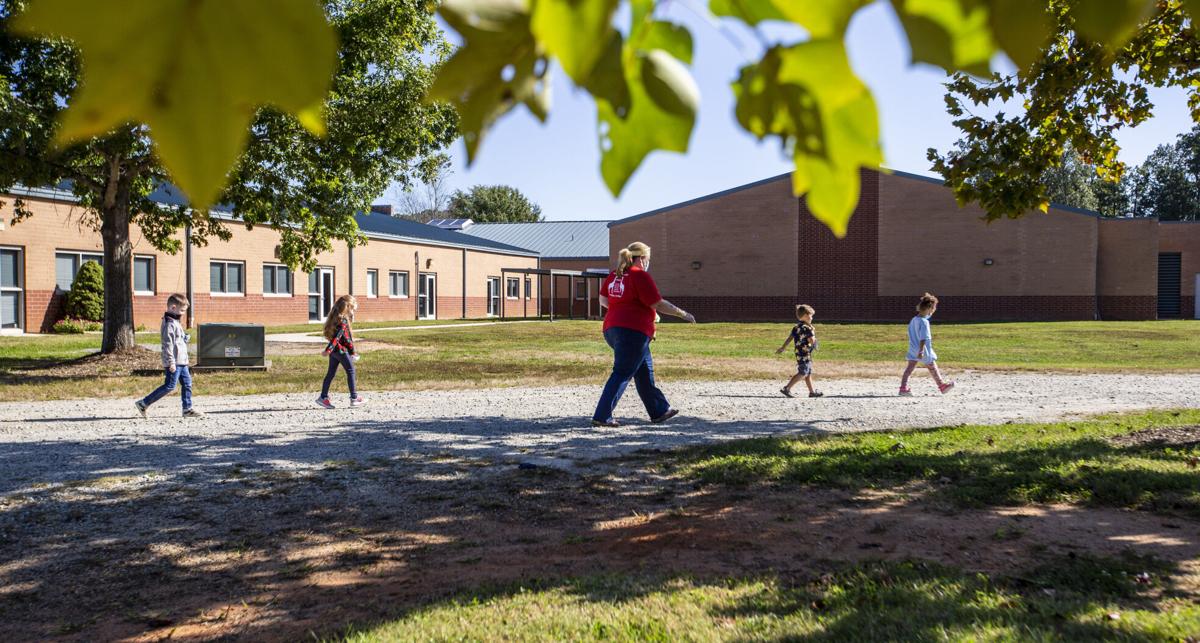 A Jesse Wharton Elementary kindergarten class walks to the playground on Monday. The biggest drops in kindergarten enrollment for Guilford County Schools came from the most and least affluent schools.

GREENSBORO — Guilford County Schools, like many districts across the nation, saw a drop-off in families enrolling their kindergartners this academic year.

Nearly 800 fewer kindergartners enrolled than projected, according to the district's count for the end of the first month of school. That accounts for nearly a third of the 2,187 fewer students than the district projected it would have this school year.

The district had expected to see a first month's enrollment of 71,531 students, excluding pre-K, which would be a gain of about 100 students from last year's first-month totals. Instead, the district fell to 69,344.

The drop marked the first time in at least 13 years, if not longer, that Guilford County Schools' first-month enrollment came in below 71,000.

Enrollment figures are important because they're used to determine state funding for school systems.

However, the effects of the coronavirus pandemic on schools led lawmakers to pass a bill, which Gov. Roy Cooper signed into law, to "hold harmless" school districts from funding cuts this academic year that would normally come with enrollment drops.

That means the district isn't expected to take a funding hit from lower-than-projected enrollment in the short-term, as had previously been a concern. However, whether this could have a financial impact on the district in the long run remains less clear.

It's not clear if the expected enrollment numbers dropped because students switched to another option, such as private, charter or virtual schools, or, in the case of kindergarten students, delayed starting school.

Enrollment in grades 10-12 reached or surpassed projections, the district said. First through ninth grade came in somewhere between 96 and 99% of projections.

The biggest drops in kindergarten enrollment for Guilford County Schools came from the most and least affluent schools.

In a nationwide survey of 400 school districts in late August, more than half reported seeing a decline in kindergarten enrollment, said Whitney Oakley, chief academic officer for Guilford County Schools. The pattern, she said, was similar for high-poverty and more affluent schools.

Theories, she said, include that relatively higher income families may be more likely choosing a private or charter school option for their kindergartners this year, while poorer or lower income families may have been forced to choose a day care option in order to work, potentially making it difficult for students to participate in remote learning.

Oakley said she has heard from some elementary schools that more families are enrolling kindergartners now that the district has opened half-day kindergarten on a voluntary basis to students.

Superintendent Sharon Contreras said the enrollment issue is one of the reasons she asked pre-K and kindergarten parents to consider participating in a voluntary option to return to school before other grades.

"Although we understand that not being in school is damaging for all students, the data is very clear, the research is very clear, that there are no students that will be more negatively impacted than the youngest students," Contreras said.

An article on the national education news website "The 74 Million" shared some reasons parents have brought up for keeping their children out of schools this year. In the article by senior writer Linda Jacobson, some parents chose to keep their children in the preschool programs they had already been attending rather than go to virtual kindergarten.

“All across the income spectrum, parents are opting out of online kindergarten,” Jenny Hontz, the communications director for Speak Up, a Los Angeles advocacy group, told "The 74 Million." “The common thread is that most people don’t think online learning works well for very young kids.”

The article also shared data from research by University of Oregon psychology professor Philip Fisher, who found both concern about students' safety in the classroom, and on the opposite end, concern about being able to manage student virtual learning at home, as big reasons for families delaying kindergarten this year among those he surveyed.

In North Carolina, children are not required to attend school before age 7. According to the N.C. State Board of Education, principals have discretion on whether to start students in kindergarten or another grade.

Monday marked the first day of classes for kindergarteners across the Guilford County school district.

Vandalia Elementary and Washington Montessori each had one staff member test positive earlier this week, according to information on the district's online COVID-19 cases dashboard as of 6 p.m. Friday. The return of pre-K was not a factor in the closures, Guilford County Schools Chief of Staff Nora Carr said in an email.

The district is closing the centers in order to better prepare schools to receive students for classes, officials said Friday in a news release. It is also closing its Saturday-only internet hubs after Oct. 10.

Parents of elementary and middle school students must decide by noon whether to continue with remote learning or take classes in-person.

GREENSBORO — As they walked over a footbridge just across from Foust Elementary School, Thomas and Yani McCargo and their son Emorie were nervous.

Blog: Most N.C. parents set to receive $335, but some will need to apply

If you are like me, you might have missed the earlier news that parents of children in North Carolina are set to get $335.

Guilford County's first day of pre-K marks a return to old, an embrace of the new

On Tuesday, pre-kindergarten students entered classrooms for the first time since school started. It was a new beginning for them, and also for Guilford County Schools.

Under certain conditions, most students could return to school in the last couple weeks of October, with high school students waiting until at least Jan. 20.

The district's dashboard — under "Connect with GCS" at the top of the website's main page and then "data dashboards" — helps pinpoint where cases are cropping up in schools and other district buildings.

Guilford school board OKs phased plan for return to school, possibly by the end of October for elementary, middle schools

High school students will wait until Jan. 20 at the earliest.

Isla Nuss and her kindergarten classmates spin around with their arms out to make sure they are social distancing at Jesse Wharton Elementary on Monday.

A Jesse Wharton Elementary kindergarten class walks to the playground on Monday. The biggest drops in kindergarten enrollment for Guilford County Schools came from the most and least affluent schools.