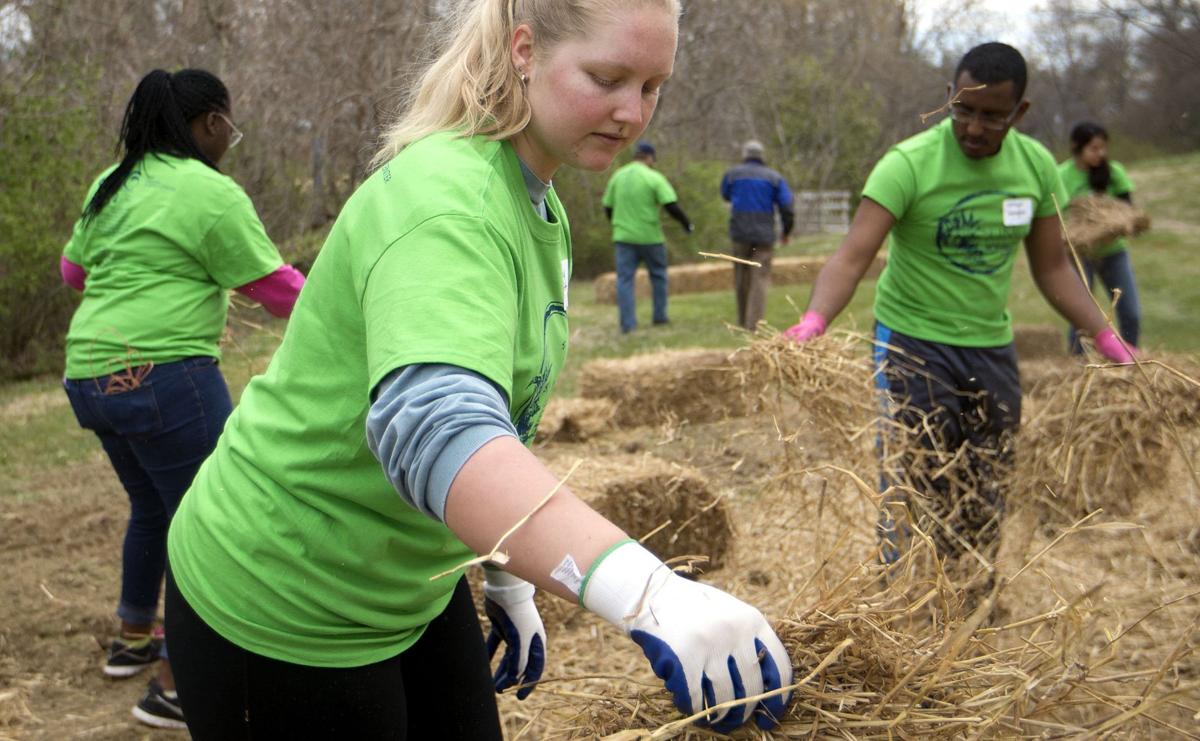 Haley Bobbitt spreads straw inside the site of a future wetlands area on UNCG's campus, Wednesday, March 22, 2017, in Greensboro, N.C.

Tom Biebighauser, a wildlife biologist and wetlands ecologist who is advising UNCG on its wetlands project, demonstrates how to spread straw over a future wetlands site on the university’s campus. 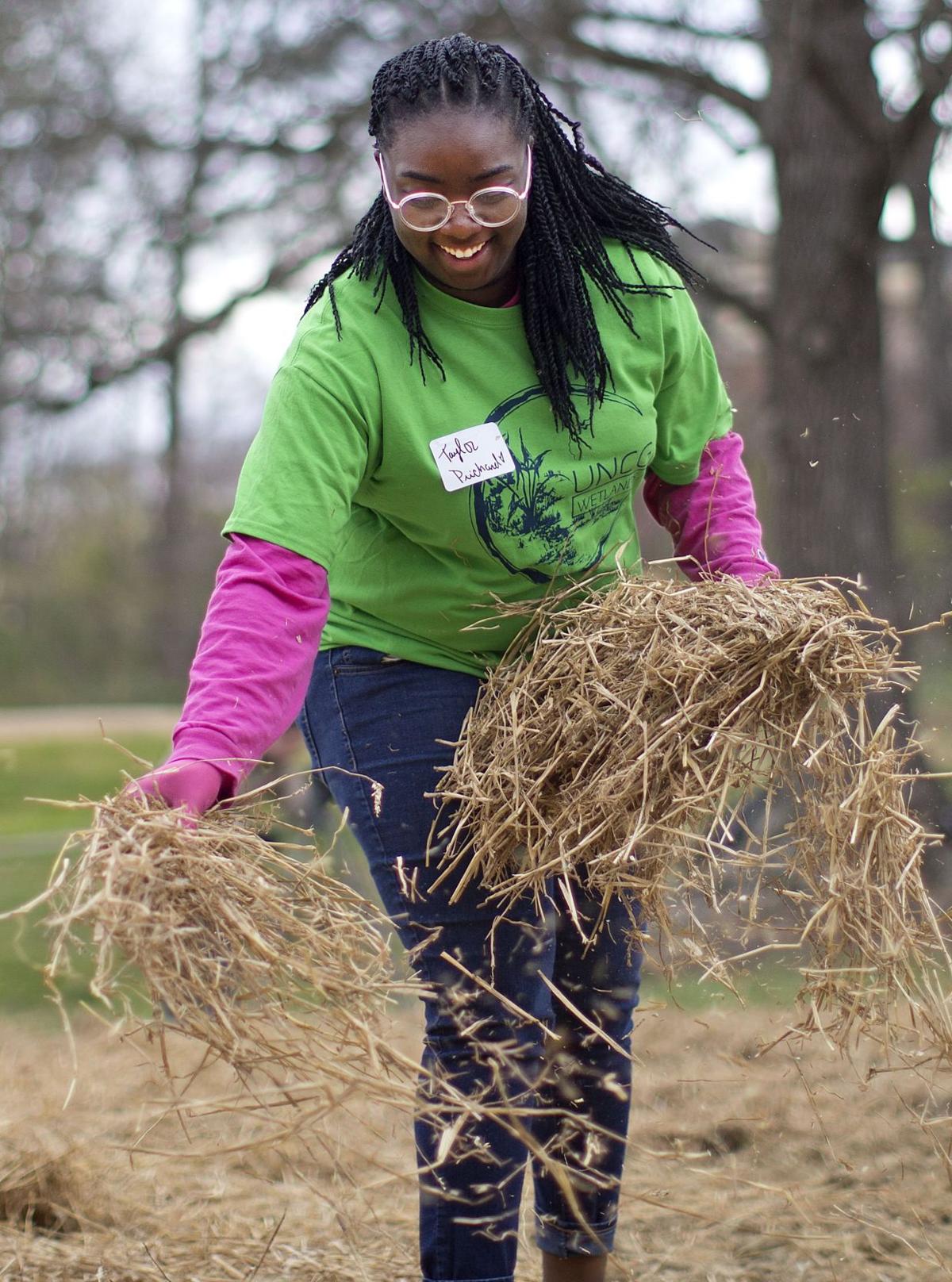 Taylor Prichard distributes straw on the site of a future wetlands area on the UNC-Greensboro campus on Wednesday. 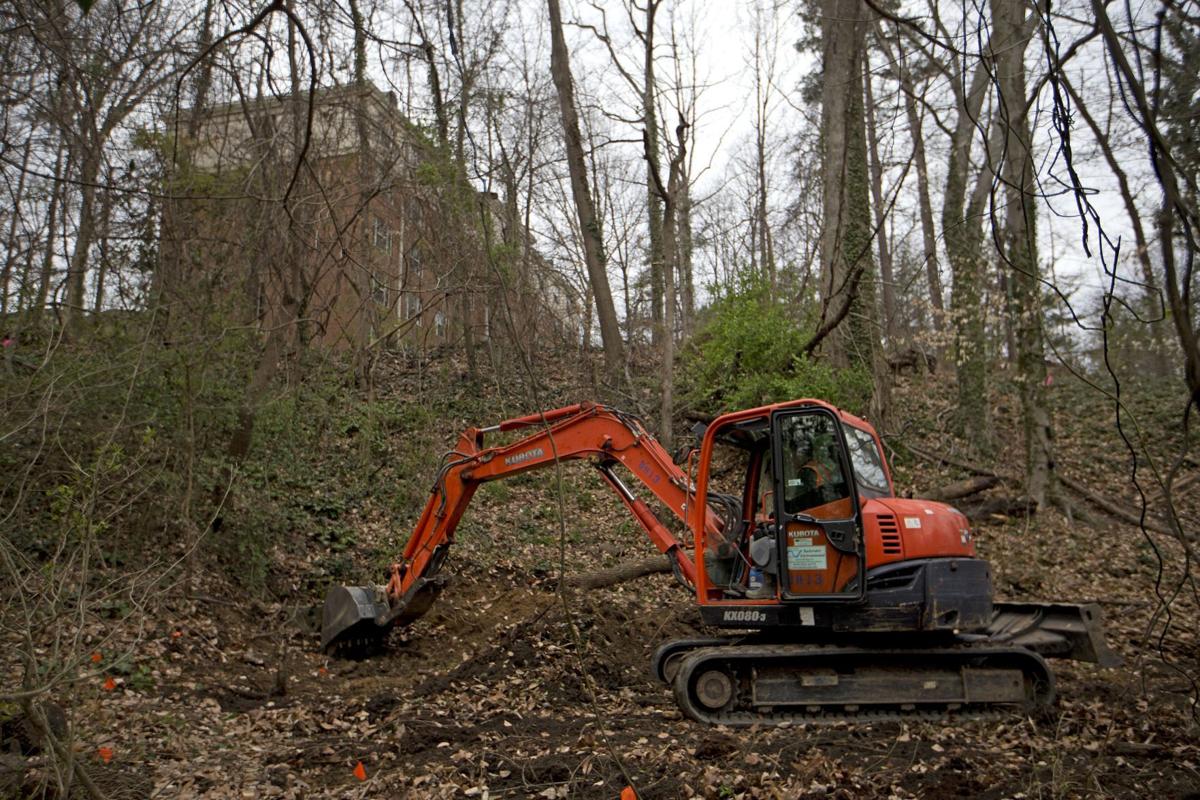 An excavator digs out the site of a wetland area on the UNCG campus, Wednesday, March 22, 2017, in Greensboro, N.C. Drainage from the dorm building above the site will help fill the wetland site. 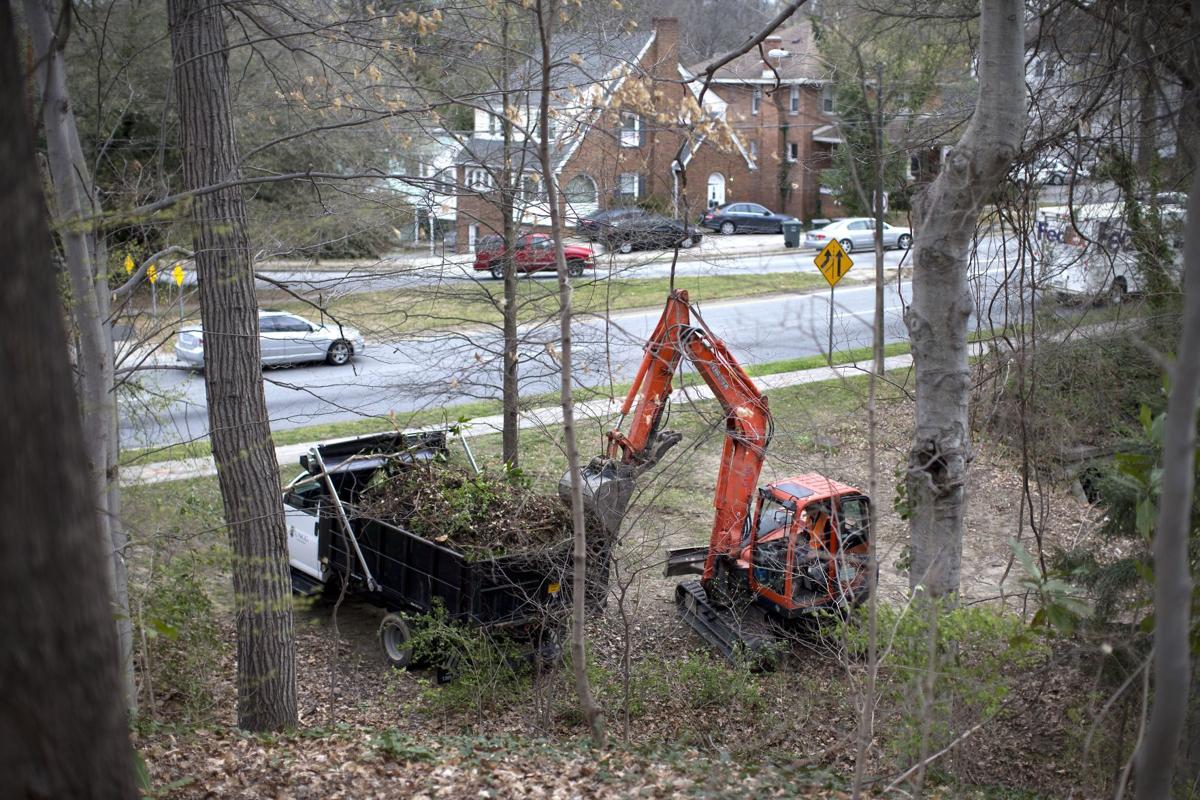 An excavator digs out the site of a wetland area on the north side of UNCG's campus, Wednesday, March 22, 2017, in Greensboro, N.C.

GREENSBORO — A few centuries ago, the part of the city that’s now the UNC-Greensboro campus was largely a marshy area populated by all types of trees, plants and animals that prefer wet land to dry.

The area was later drained to be farmland, leveled to become a college campus and now — on two small slivers of campus, anyway — being returned to its naturally swampy state.

UNCG employees and students are using an excavator and shovels this week to create two wetlands on the north side of campus near West Market Street.

When rainwater fills in these small areas and plants have a chance to grow, UNCG professors say they will become places for serious scientific exploration and school field trips.

“It’s being viewed as a living laboratory,” said Malcolm Schug, an associate professor of biology and one of the leaders of the campus wetlands project.

The first wetlands area is a shallow bowl in a sunny spot just north of the UNCG Soccer Stadium and behind a dorm.

The bowl, completed Tuesday, is about 40-by-60 feet and 18 inches deep. The soil here is sandy and rocky, so there’s a liner to keep the water from draining out.

Dozens of student volunteers dragged large branches and rocks into the bowl so frogs and birds will have a place to perch in the sun. On one bank, they loosed the dirt so turtles can dig down and lay their eggs.

In a couple of weeks UNCG will put in native plants — several varieties of rushes and sages — and wait for it to rain. About 4 inches of rain should fill up the first wetlands area, Schug said.

The second wetlands area is in the woods near UNCG’s Music Building, just a few steps from West Market Street. It’s longer and narrower than the first pond, roughly 20 by 40 feet, but there’s more clay in the soil and the area is perpetually damp.

This shady pond will be fed by a drainage pipe that collects rainwater from a dorm room and a parking lot nearby. Excess water will be directed into a nearby creek.

The two areas should attract insects, turtles, frogs, birds, mammals and a host of other flora and fauna. A motion-activated camera set up near the first wetland site recently caught glimpses of red and gray foxes.

“It won’t take them long for (animals) to make their way in here,” Schug said.

Talk of building wetlands at UNCG started about three years ago with discussions among university employees, students, the city of Greensboro and the Greensboro Science Center. Coordinating the project was UNCG’s RISE Network, which brings together university faculty and teachers at local schools and science centers to improve teaching of science, math and technology.

A year ago, the RISE Network invited to campus an expert in wetlands construction from Kentucky. Tom Biebighauser, who has helped several hundred colleges build wetlands, helped UNCG identify a couple of sites. He returned to campus to oversee the installation this week, three months after Duke Energy awarded the university a $46,000 grant for the project.

On Wednesday, students spread straw at the edge of one of the new ponds to keep the dirt and grass seed from washing away. As the students worked, Biebighauser kept up a running commentary on how wetlands are formed, how they improve water quality and how they increase plant and animal diversity.

“Getting students involved in the design and restoration of wetlands is a really good way of improving science scores … and interest,” he said. “If you experience something with your hands, you’re going to remember it.”

Even before the new wetlands fill up with water, UNCG professors already have started their research. They plan to measure water quality and keep a count of the numbers and types of plants and animals in the area. They started with the nearby creeks, and they’ll compare the data to what they find in the newly formed wetlands.

Once the wetlands mature, Schug said, UNCG scientists and students could develop other research projects. Teachers from local schools can bring their students here on field trips to learn about science and nature.

“We’re viewing this as a very long-term community project that will continue for many, many years,” Schug said.

One chronic complaint about wetlands is mosquitoes. The water is stagnant, which is the perfect breeding ground for the blood-sucking swarms that make summer porch-sitting and outdoor-living unpleasant.

Unlike buckets, old tires or ruts in the road where water can collect, wetlands have plenty of creatures that keep the mosquito population in check.

Biebighauser said wetlands attracts dragonflies, damselflies, beetles and salamanders whose larva love to munch on mosquito eggs. Bats, birds and amphibians who are attracted to wetlands feed on adult mosquitoes.

“In a healthy wetlands,” he said, “mosquitoes will check in but they won’t check out.”

For more information about wetlands, visit Biebighauser's website at www.wetlandrestorationandtraining.com.

For more information on the UNCG's wetlands project, visit the university's Research and Instruction in STEM Education website at rise.uncg.edu.

The Syllabus: The natural world at UNCG (footnote edition)

One of the great things about the higher ed beat is the variety. One week I’m hard-hatting my way through a construction zone at High Point Un…

The 35th annual I-Fest will be held on College Avenue on campus.

The nine-stall station is in the Oakland Avenue parking deck on the south side of campus.

Margot Lee Shetterly, author of The New York Times bestseller and critically acclaimed movie, was the keynote speaker as the school awarded about 2,600 degrees Friday.

Both small ponds on campus are full of water — and attracting a variety of animals — thanks to heavy rains since March.

GREENSBORO — UNC-Greensboro will build two wetlands on campus this spring.The university will create these marshy areas in Peabody Park, the 3…

GREENSBORO — For the past 13 years, a UNC-Greensboro art professor has been typing postcards to presidents.Now, all of those postcards — 3,289…

GREENSBORO — UNC-Greensboro and the Phillips Foundation think they have work together to improve the quality of life in Guilford County.Their …

The Frontier Set project wants to improve the academic outcomes for college students, especially those who are first-generation, minority or l…

Commencement is May 12 at the Greensboro Coliseum.

Sharon Morrison of UNCG and Lisa Owens-Jackson of N.C. A&T are the 2017 winners of the UNC system’s Awards for Excellence in Teaching.

Haley Bobbitt spreads straw inside the site of a future wetlands area on UNCG's campus, Wednesday, March 22, 2017, in Greensboro, N.C.

Tom Biebighauser, a wildlife biologist and wetlands ecologist who is advising UNCG on its wetlands project, demonstrates how to spread straw over a future wetlands site on the university’s campus.

Taylor Prichard distributes straw on the site of a future wetlands area on the UNC-Greensboro campus on Wednesday.

An excavator digs out the site of a wetland area on the UNCG campus, Wednesday, March 22, 2017, in Greensboro, N.C. Drainage from the dorm building above the site will help fill the wetland site.

An excavator digs out the site of a wetland area on the north side of UNCG's campus, Wednesday, March 22, 2017, in Greensboro, N.C.