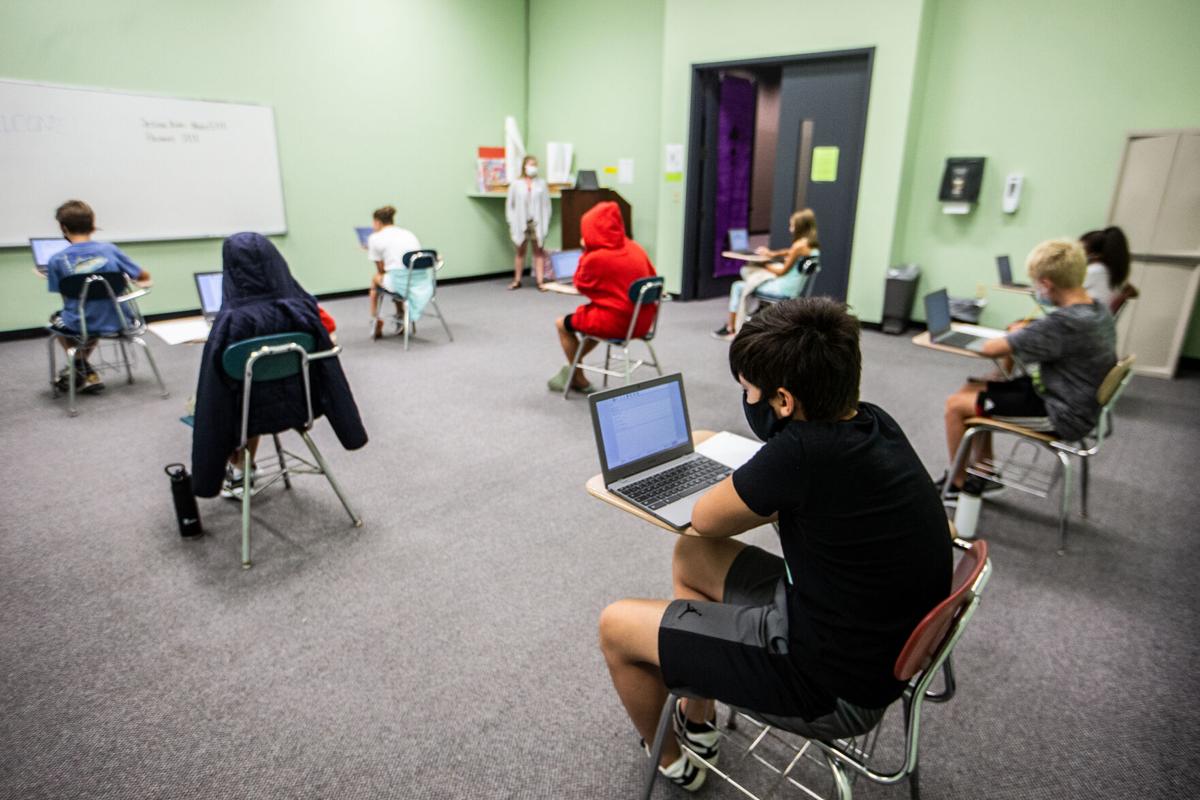 Sixth graders take a placement test in a classroom at Revolution Academy in Greensboro, N.C., on Thursday, August 6, 2020. 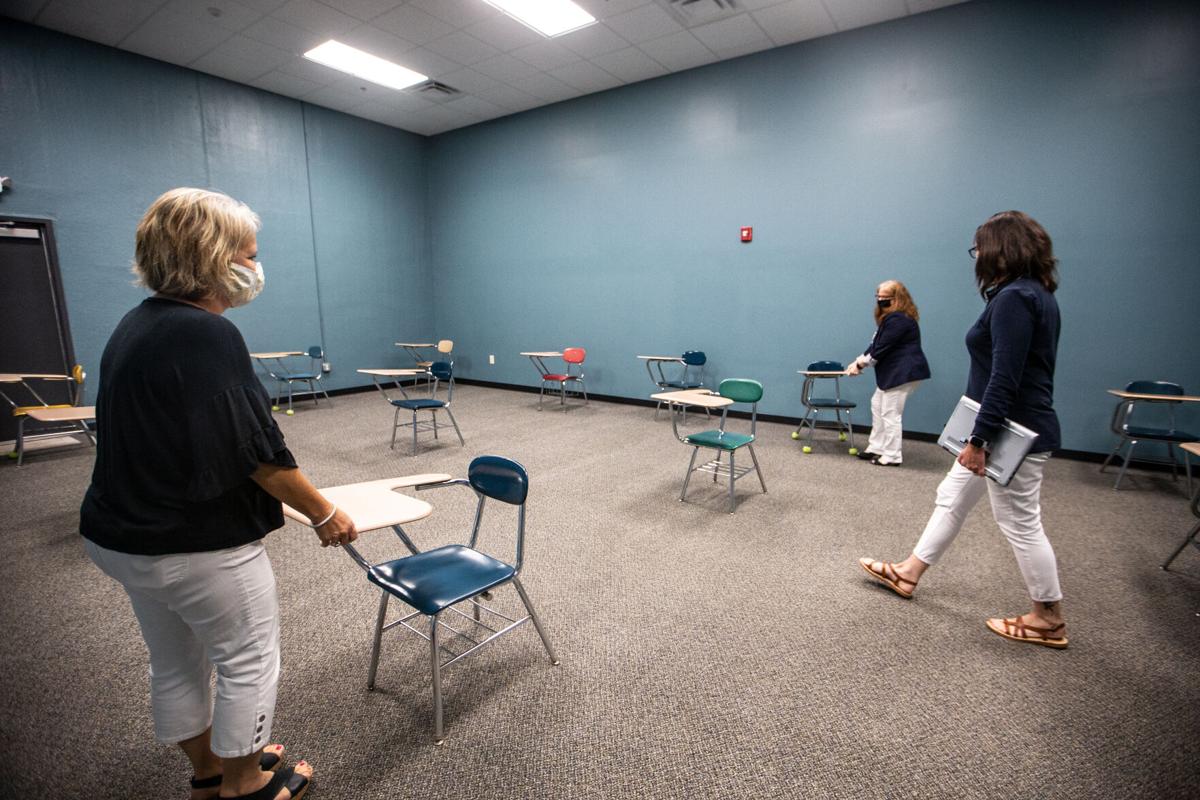 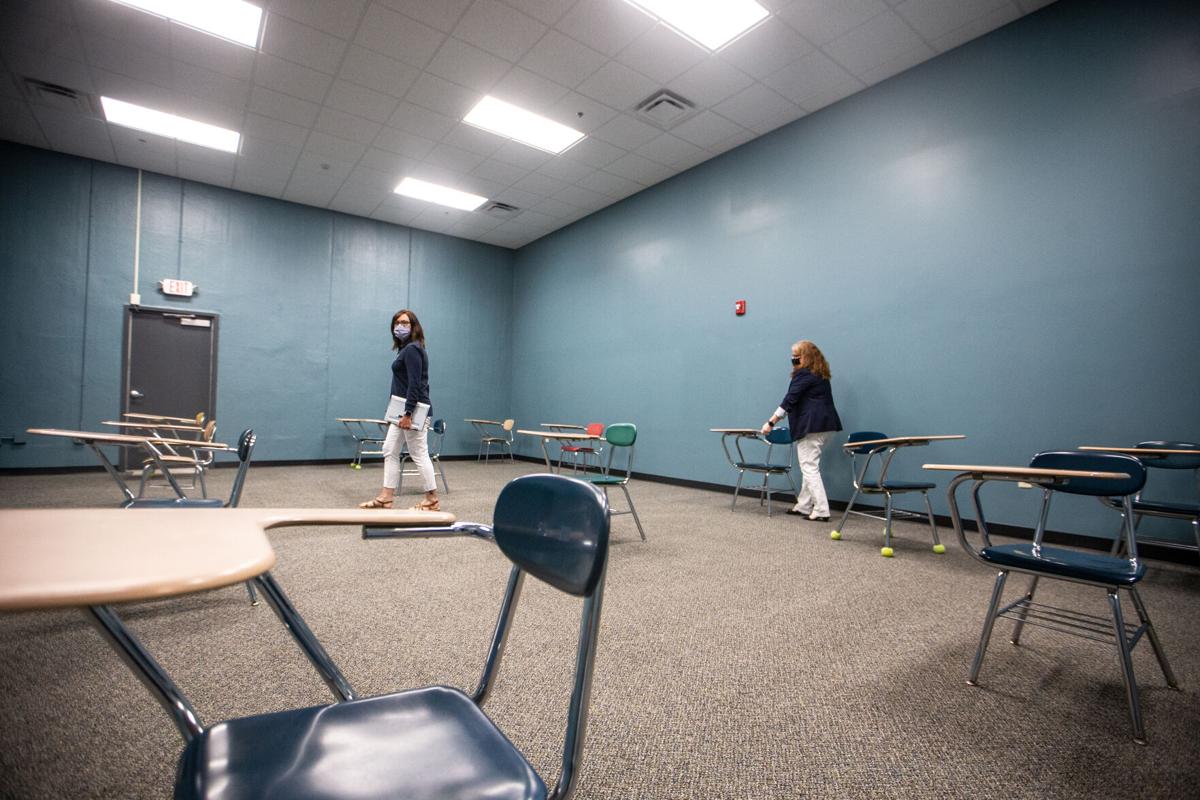 GREENSBORO — Seven charter schools in Guilford County are expected to start the school year with remote learning, while the other five will begin with a hybrid of remote and in-person instruction.

“It is not an ideal situation, but we need to keep everybody safe," Liz Firm, vice president of TMSA Public Charter Schools, said in a news release.

Her group, which includes Triad Math and Science Academy, is keeping its schools remote only for at least the first quarter of the school year.

On the flip side, Revolution Academy, a new charter school in Guilford County, is one of those pursuing a hybrid approach.

"We struggled with how to make it work, but we didn’t struggle whether to make it work," said Mary Catherine Sauer, the school's principal, about the decision to teach students in person.

The school starts its first-ever year on Aug. 20. Even if they have to go remote-only later, leaders wanted to start with some in-class learning to forge what they see as critical in-person connections, Sauer said.

Like other schools, charter schools in North Carolina must stay remote or follow Gov. Roy Cooper's orders for social distancing, including arranging furniture to ensure six feet of separation between people.

Next Generation Academy, which starts school Aug. 19, plans to transition students to face-to-face classes the first week of October. Samuel Misher, the school's director, said it will accommodate students who prefer to keep learning remotely. The school has a few openings in grades kindergarten through 4, Misher said.

Guilford Preparatory Academy will have remote learning for the first nine weeks and then reassess whether to extend it another nine weeks based on recommendations from the Centers for Disease Control and Prevention and Guilford County's health department, principal Bennie Bradley said. The school is still accepting new students for the 2020-21 school year, he said.

The Experiential School of Greensboro is eyeing a longer remote learning period.

"We feel it is best to engage in remote learning until January, yet we will reassess at the end of November (end of first trimester), and if possible we will begin to phase into meeting face-to-face," the school said on its website.

Among the five schools starting with hybrid learning, all planned to also offer a remote-only option.

"Half of the students will come in to the actual building on Monday and Wednesday while their peers work remotely from home and then they will rotate on Tuesday and Thursday," Piedmont Classical High School's director Travis Ward said in an email. "Fridays will be used for extra help sessions and building cleaning."

He said the school is still accepting new students, especially in grades 10 and 11.

The College Preparatory and Leadership Academy of High Point will start with one day of in-person instruction before transitioning to two per week after Labor Day, according to Michelle Johnson, its director. The school is enrolling seventh through ninth grades.

Revolution Academy, which has a wait list for the 2020-21 school year, is the only public school in Guilford County offering daily in-person instruction at school. Sauer said the school's temporary location in a church building — with more space than they normally would have needed — makes that possible.

It's also shortened the academic instruction periods per day, putting more emphasis on daily work at home, she said.

Kindergarten and first grade students' families can pick remote learning or in-person learning, she said. Families of second through sixth grade students have a third option — sending their child to school for just a morning or afternoon academic period and getting their special classes virtually at home.

"We are trying to be as flexible as we can for our parents and our students," Sauer said.

There will be no fee for the service but there is no funding to offer transportation. Officials plan to share more details about the student registration process next week. The learning centers are not planned to be for in-person instruction, but a place for students to do their online work.

Chief of Staff Nora Carr said the employee was not showing symptoms and had passed a health screening and temperature check before attending the training, where employees all wore masks. The training area and any other places the employee visited were cleaned and sanitized and the building reopened to staff the next day.

GREENSBORO — Siblings at Cornerstone Charter School have tested positive for COVID-19, prompting the school to temporarily go to all-virtual l…

CHARLOTTE — Yolanda Ames and her boys live in a crowded apartment on a dead end street in East Charlotte’s Grier Heights. Wires that could bring the world — and her boys’ classrooms — into her home zigzag between poles across her neighborhood.

Sixth graders take a placement test in a classroom at Revolution Academy in Greensboro, N.C., on Thursday, August 6, 2020.