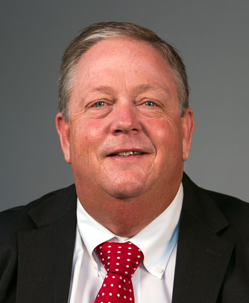 CHAPEL HILL — Randy Ramsey is the new chairman of the UNC Board of Governors.

Board of Governors members Tuesday made Ramsey their unanimous choice to lead the UNC System's governing board.

“It is my great honor and privilege to serve as chairman of the board, and I want to thank my fellow members for entrusting in me with this responsibility,” Ramsey said in a statement put out Tuesday by the UNC System. “I’d like to thank Governor Smith for his service and the great work that he has accomplished during his time as chair. The initiatives that he has put in place have done a great deal for the State of North Carolina and I look forward to continuing in this effort going forward.”

Ramsey is the founder and president of Jarrett Bay Boatworks, a Beaufort company that builds custom sport fishing boats. He's a graduate of Carteret Community College and previously served on the N.C. State University Board of Trustees. He lives in Beaufort.

Smith announced last week that he would step down as the board's chairman Tuesday. He cited the demands of running several businesses while attending to university system business. Smith will remain on the Board of Governors through the end of his term in 2021.

Board of Governors members elected Wendy Murphy of Wallace in eastern North Carolina to be vice chairwoman. Pearl Burris-Floyd will remain as secretary.

Raleigh TV station WRAL reported that Ramsey and Murphy were the only candidates for the two positions and that the board meeting was conducted by telephone.

The chairman of the UNC Board of Governors is leaving that role next week, and the UNC System interim president gives his notice.

In Greenville, support grows for embattled ECU leader who was 'trying to be a man of the people'

Interim chancellor Dan Gerlach remains on administrative leave after pictures surfaced over the weekend of him at a local bar.

A Raleigh TV station reported that physics professor E. David Davis made the comments during a lecture Tuesday.

Greensboro's Dwight Stone named to UNC Board of Governors

Stone is chairman of a Greensboro custom home-building company and a past chairman of the UNC-Chapel Hill Board of Trustees.