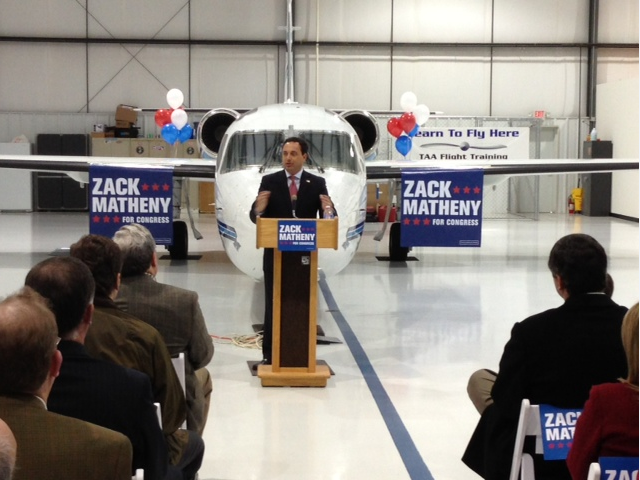 Zack Matheny announces his run for Congress during a news conference at Koury Aviation in Greensboro on Dec. 9, 2013. 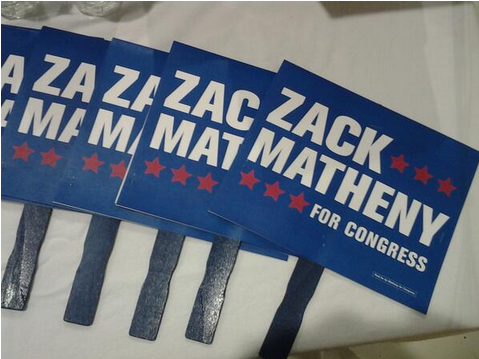 Campaign materials were displayed during a news conference at Koury Aviation in Greensboro on Dec. 9, 2013.

Matheny, who easily won re-election to the council last month, said he is running for Congress because he loves representing people in government. He said he hopes to emulate Coble’s legendary commitment to constituent service.

Matheny billed himself as a common-sense candidate and said the recent federal government shutdown — part of a fight over the new health care law and deficit spending — was inexcuseable.

He noted that during his six years on the council, the city hasn’t raised taxes. He gave only a partial criticism of the Affordable Care Act, which other Republican candidates have severely criticized.

“It was too much too fast,”

“We’ve got to figure out what is right and make it happen,” he said.

Matheny declined to get into details beyond that. Rockingham County District Attorney Phil Berger Jr. called for a full repeal when he announced his candidacy last month, and other candidates — Lawndale Baptist Church associate pastor Mark Walker, High Point financial adviser Don Webb and the Rev. Dan Collison, a Jamestown-area pastor — are staking out similar turf on the Republican right.

Matheny is more of a moderate, though he eschewed labels after his announcement.

“Is there such thing as a common-sense person that just works hard and gets the job done?” he asked. “That’s what I want to do.”

Matheny, 40, announced his run at Koury Aviation near Piedmont Triad International Airport to emphasize aviation’s importance to the Triad economy. He stood in a hangar in front of a private jet festooned with red, white and blue balloons and “Zack Matheny for Congress” signs.

It was Matheny who announced last week that the city was trying to recruit a Boeing aircraft assembly plant. He promised an aggressive push, but so have other cities and states, and the winner will probably have to pony up massive incentives.

Matheny and his wife, Lauran, have three children, ages 1, 3 and 12. All attended Monday’s announcement and the youngest, Lily Grace, stole the show for a while, toddling around the hangar.

“Luckily, Lily Grace is not of age to run against me,” Matheny said.

Matheny is self-employed and works on a variety of projects, including investing in real estate deals and a company that insulates homes. He said he would seek a balance during this congressional run among family, work, campaigning and his job on the City Council.

He planned another event Monday in Rockingham County and one today in Alamance County. The district includes those counties, Guilford County and all or parts of seven others, mostly along the Virginia state line.

Primary elections will be held May 6, followed by the general election Nov. 4. The district leans Republican, and there’s only one Democrat in the race so far: Laura Fjeld of Orange County.

LEXINGTON, N.C. (AP) — A North Carolina man is charged with felony murder in connection with a shooting death, authorities said.

ROCKY MOUNT, N.C. (AP) — Police in an eastern North Carolina city were investigating Sunday the shooting death of a teenager found inside a home.

CHARLOTTE, N.C. (AP) — A North Carolina man has pleaded guilty to charges stemming from his role in a scheme to defraud North Carolina's Medic…

RALEIGH, N.C. (AP) — A North Carolina man trying to steal a catalytic converter from a disabled car was killed when the jack he used to get un…

WHITSETT, N.C. (AP) — A North Carolina woman killed in a crash while driving the wrong way on Interstate 40 on Thursday evening was reported m…

FAYETTEVILLE, N.C. (AP) — A mother and child missing for more than five years have been found safe in North Carolina, the U.S. Marshals Service said.

CHARLOTTE, N.C. (AP) — A North Carolina man shackled to a floor while in police custody did not get help from police officers who watched him …

ASHEVILLE, N.C. (AP) — A woman being detained at a North Carolina jail has died, according to a sheriff's office, marking the fifth such death…

North Carolina mother dies after being thrown from car

GREENSBORO, N.C. (AP) — A North Carolina woman was killed Wednesday night in a rollover wreck after she was thrown from a car that was carryin…

Zack Matheny announces his run for Congress during a news conference at Koury Aviation in Greensboro on Dec. 9, 2013.

Campaign materials were displayed during a news conference at Koury Aviation in Greensboro on Dec. 9, 2013.