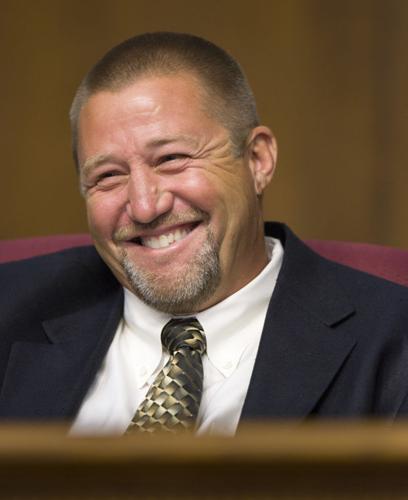 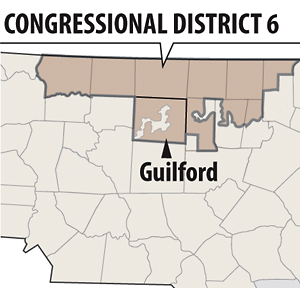 "He is a very upstanding, outright speaking, honest, with integrity man," Yow said of Berger at a Wednesday morning press conference at Berger's Greensboro campaign headquarters.

Yow said he's heard from people across the district who have met Berger Jr. as he's campaigned and they've all been impressed. Yow said the Rockingham County District Attorney has impressed him, too.

"Year after year, serving the public, he's done an astounding job," Yow said of Berger. "He has shown that he has the integrity that it takes to hold the seat Mr. Coble has held for many years, to represent the citizens."

Yow served on the Guilford County Board of Commissioners for 12 years, stepping down in 2012. He unsuccessfully challenged Rep. Howard Coble in the District 6 Republican primary in 2010 and 2012. He was considering another run this year but sat it out after a serious head injury a year ago.

Coble, who will step down from his seat this year after 30 years, introduced Yow at Wednesday's press conference as "the commissioner with the beguiling smile."

"That smile can be receptive or it can be a trap, depending on how the issue is resolved," Coble said, joking.

"When Billy served as a county commissioner I can say without reservation he was not just one of the most popular elected officials in the county but also in Piedmont North Carolina," Coble said. "Everybody knew him, and everybody respected him."

Berger will face former minister Mark Walker in the GOP runoff on July 15. The winner will take on Democrat Laura Fjeld for the seat in November.

Yow said Berger's experience in office distinguishes him from Walker — and the voters will see that.

Local tea party group Conservatives for Guilford County has thrown its support behind Walker. Yow, who had a falling out with the group after they endorsed someone else in the 6th District primary in 2012, said he doesn't think they'll be much of a factor in this election.

"Who have they endorsed that's ever really won?" Yow said. "They don't have reach across the district really, outside of Guilford County. And Phil is reaching out to the entire district. That's a lot of area."

Walker has gotten strong tea party support throughout the district, but his campaign has from emphasized from the beginning that their appeal is wider than that. Walker says proof is the strong showing he made in the crowded May GOP primary, taking 25 percent of of the vote to Berger's 34 percent and forcing a runoff.

Guilford Commissioner Alan Branson also weighed in on the race Wednesday. Walker will represent a wider swath of the district and not just business and special interests across the state and in Washington, Branson said.

"One of the things that Mr. Coble has always been is a man of the people," Branson said. "He's always been out there, always been transparent with his constituents. Mr. Berger hasn't been that way in this campaign. He comes off as cocky. He doesn't come to public forums. He's turned down debates. That's now what you want to see."

Berger said he's looking forward to a Time Warner Cable debate with Walker on July 11 - but he won't have to spend much time on debate preparation.

"In terms of preparation, I say the same thing everywhere I go," Berger said. "I'm consistent on the issues, I'm grounded in conservatism. So as far as debate prep, that's not something we engage in. I speak the truth on the issues all the time."

Read more news about local elections on our Elections page.

The former Guilford County commissioner, sidelined by an injury, is happy to guide others.

A crowded field replace long-time U.S. Rep. Howard Coble, who is retiring after 15 terms, is now down to Greensboro Republican Mark Walker and…

Berger accuses Walker of lying about alma mater on Facebook

As the July 15 runoff nears for the GOP nomination for the 6th Congressional District seat now held by Howard Coble, both candidates are racki…

Here is a voter’s guide to the July 15 runoff, or second primary.

The two Republican candidates for Congress will meet July 11, four days before their runoff election.

There appears to be no shortage of groups wanting to host a debate between the two Republican candidates for the 6th Congressional District.