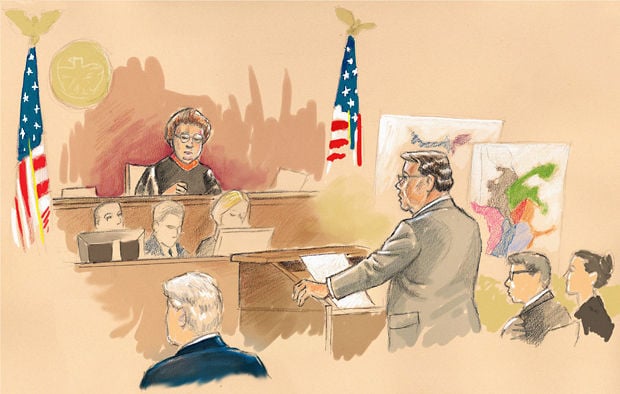 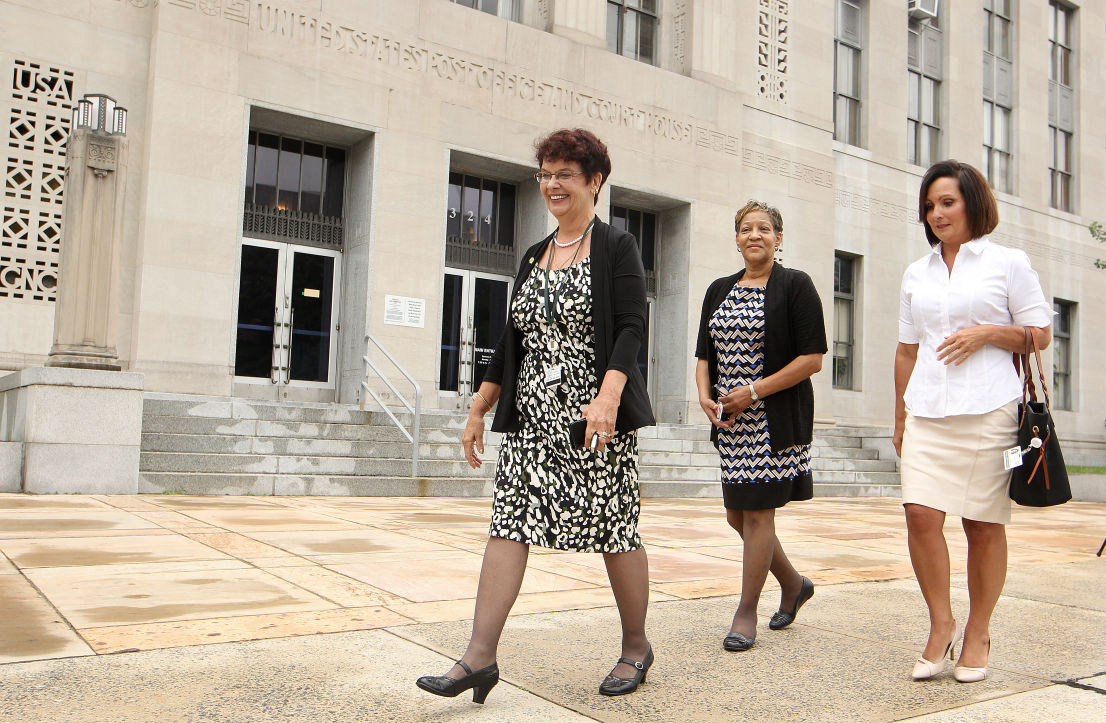 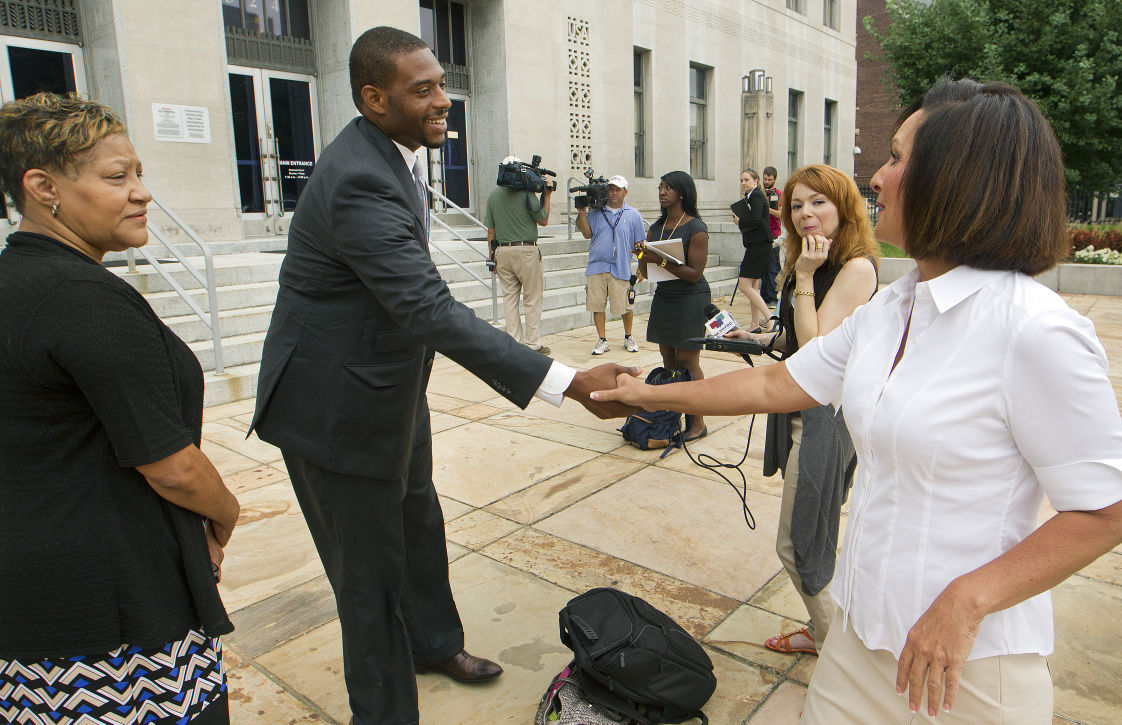 Hightower looks on outside the federal courthouse in downtown Greensboro. They spoke with the media before walking in the courthouse 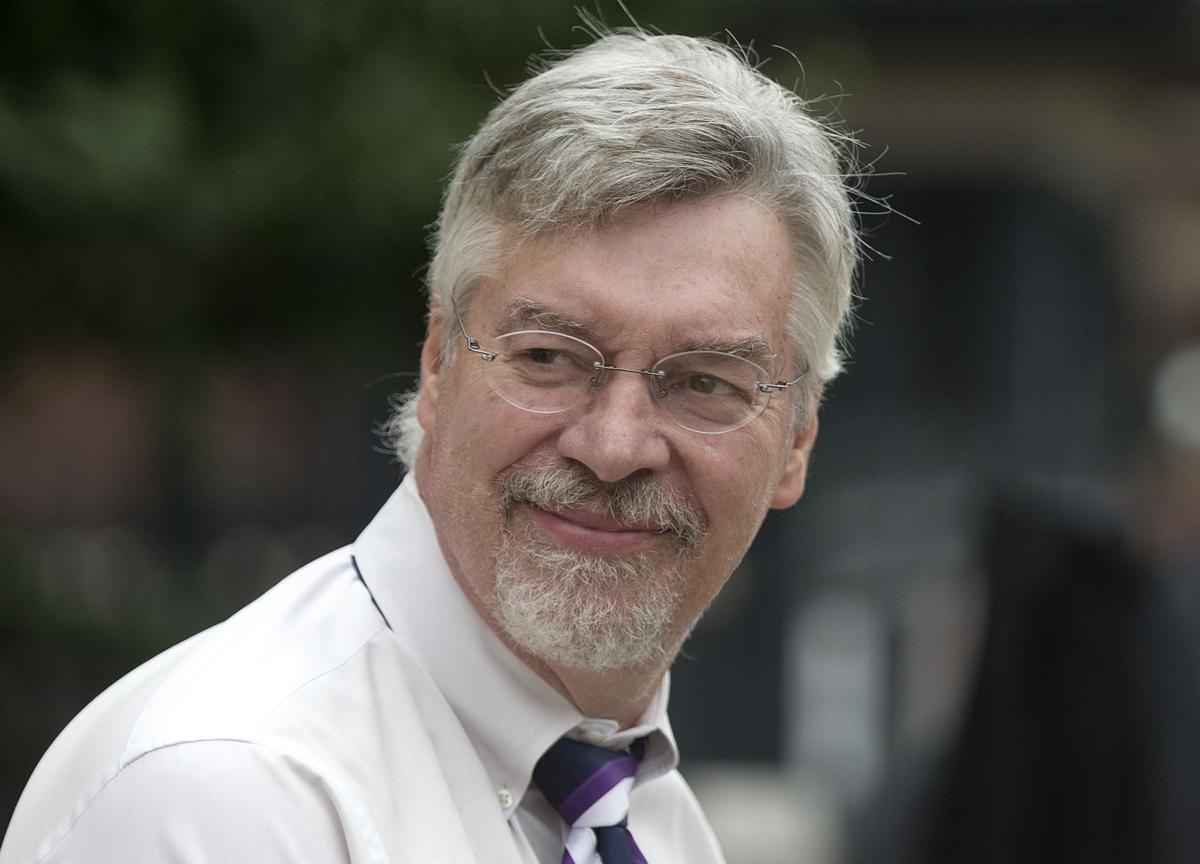 Guilford County Attorney Mark Payne leaves the courthouse. He represented the elections board, which was named in the suit. 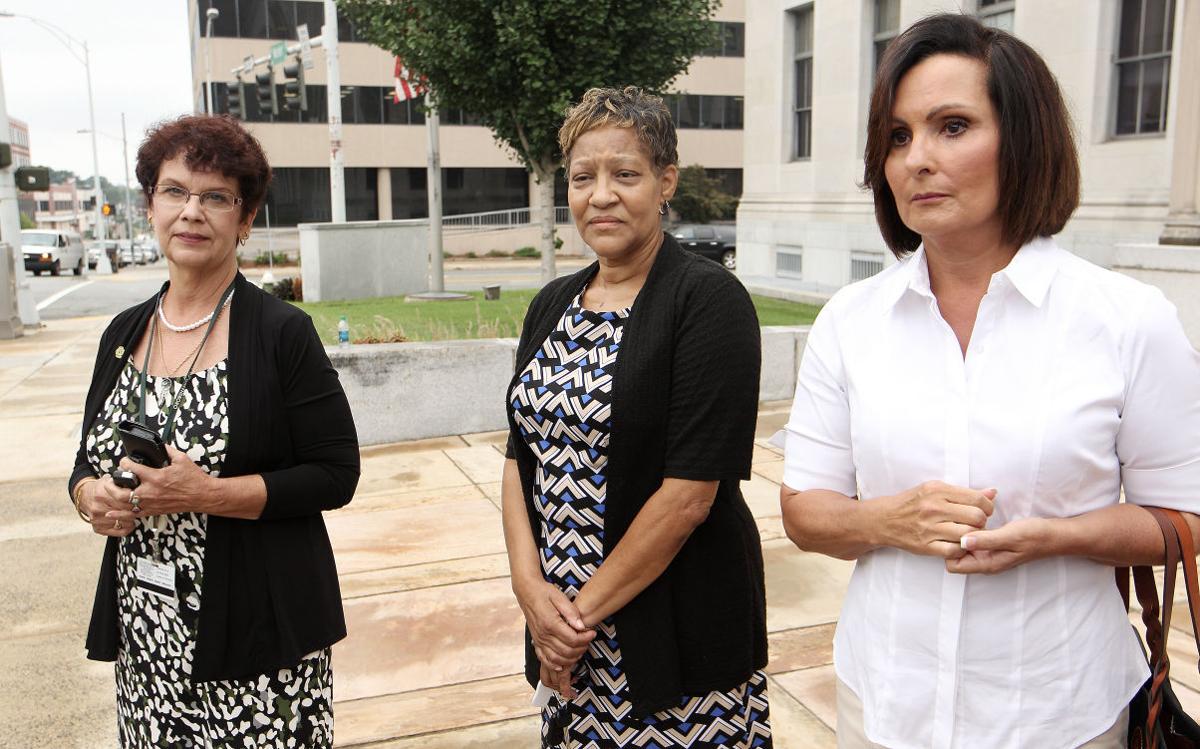 Talking to the media outside the federal building in downtown Greensboro after a court hearing in July over a new state law revamping the City Council are (from left) Councilwomen Marikay Abuzuaiter and Sharon Hightower and Mayor Nancy Vaughan. 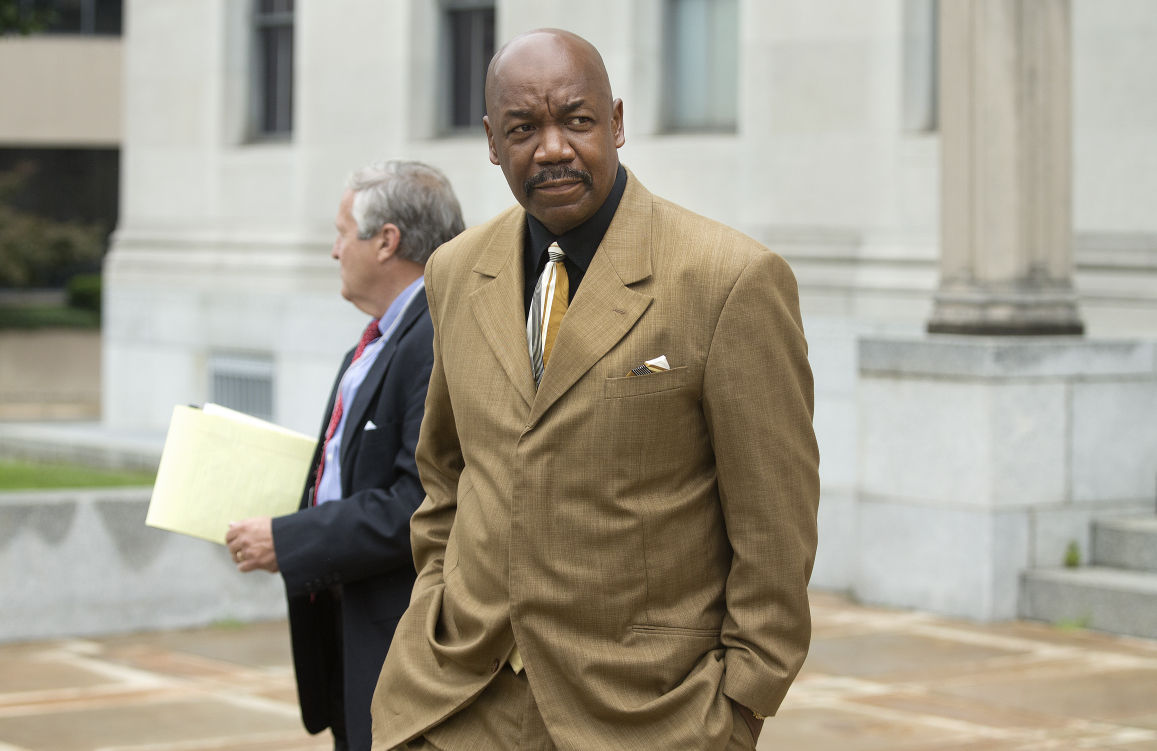 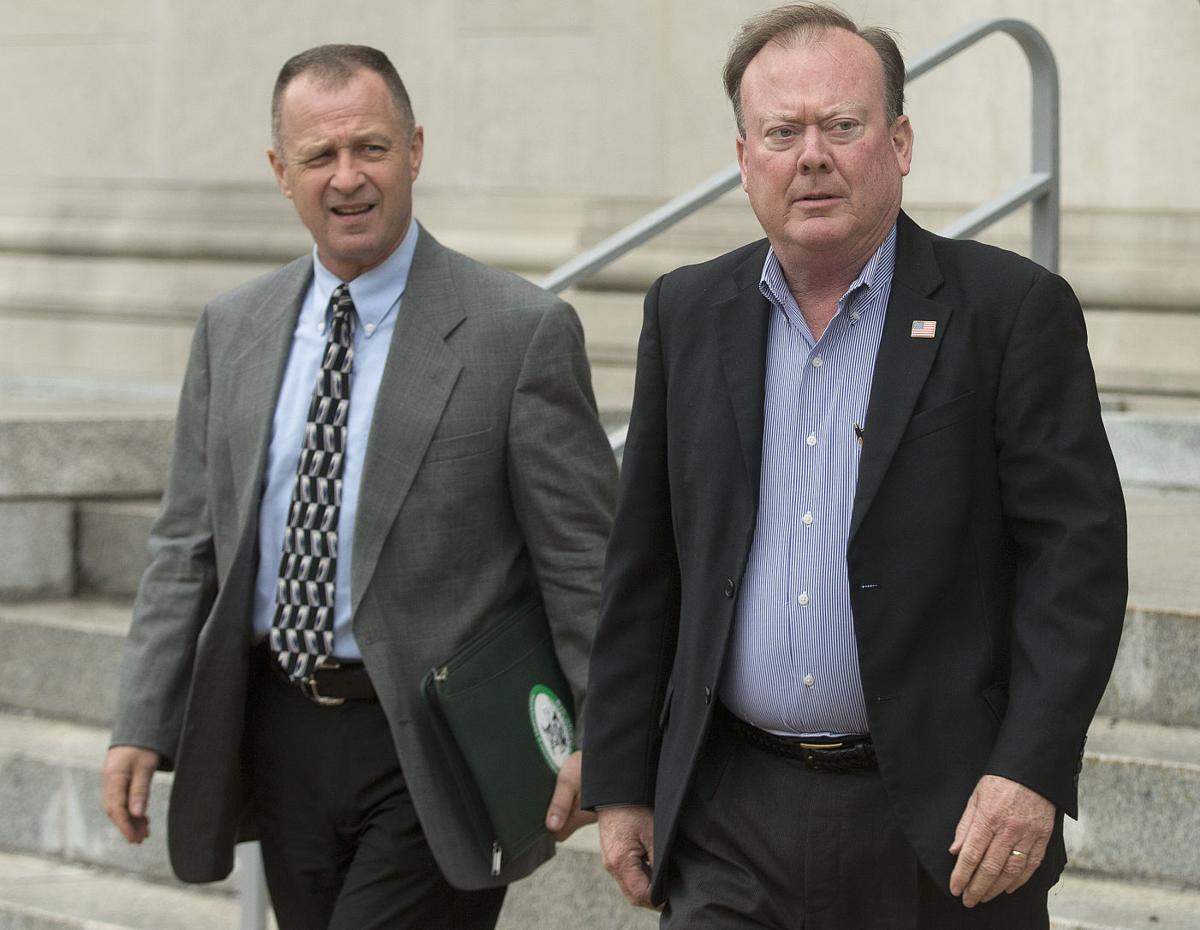 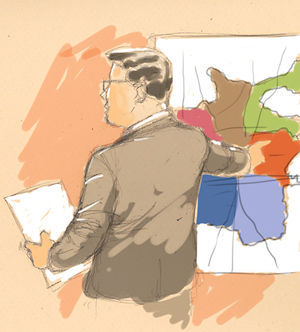 Attorney Jim Phillips refers to a map of the new council districts. 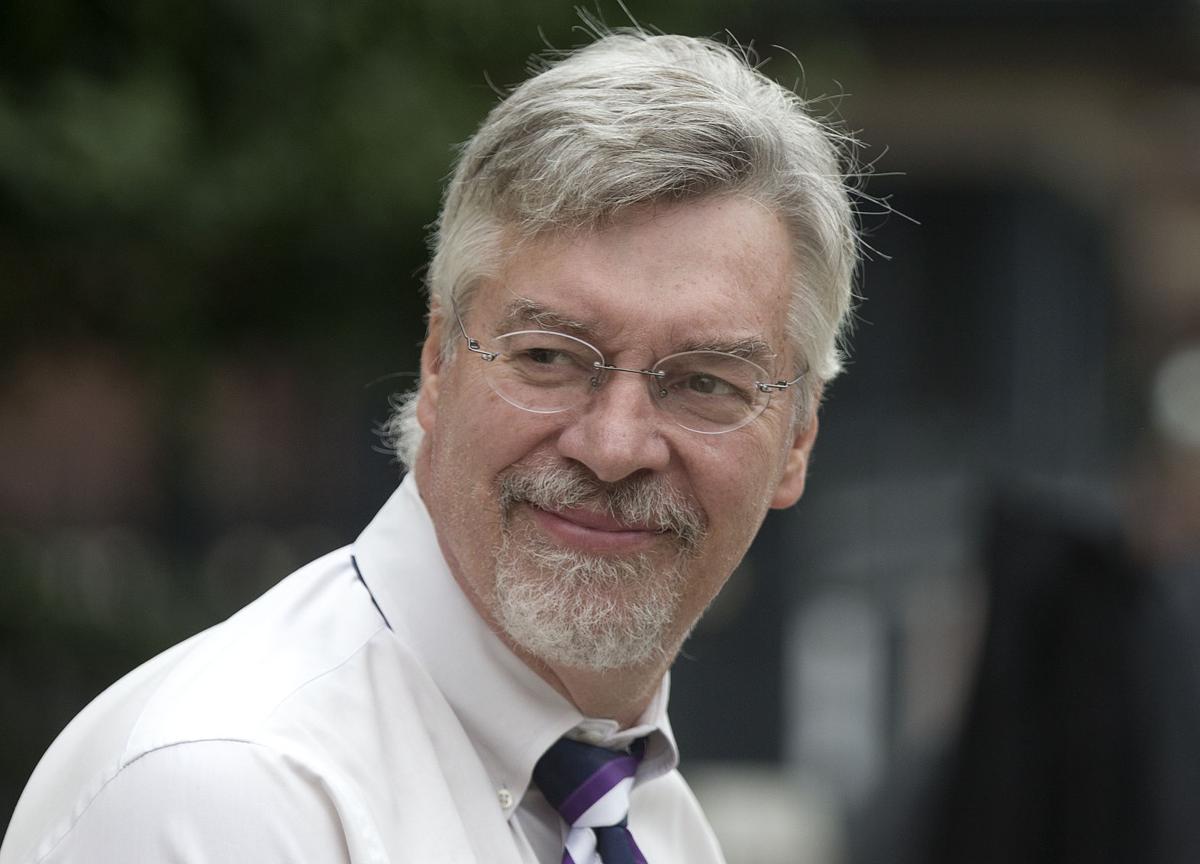 GREENSBORO — A federal judge ruled for the city Thursday, granting a permanent injunction against a new state law that remakes the City Council.

That means the law will not go into effect for this City Council election cycle. Its ultimate fate will be decided at a future trial to take place before the 2017 election.

Greensboro voters get their day in court, but another fight may loom back in the legislature.

Judge Catherine Eagles heard arguments for nearly two hours in U.S. District Court for the Middle District of North Carolina in Greensboro before making a ruling.

“It appears ... that the new statute deprives Greensboro voters, alone among municipal voters in the state, of the right to change the city’s municipal government by referendum ... without a rational basis,” Eagles wrote in her order Thursday. “The plaintiffs would suffer irreparable harm should the 2015 election go forward under the new law.”

The city’s traditional council structure and district maps will remain in place through November’s election.

“We’ve had people who have called us self-serving, frivolous, all sorts of other things,” Mayor Nancy Vaughan said after the ruling. “To have the judge agree with us on the merits of this case feels good.”

At issue in the lawsuit: A law passed by the General Assembly earlier this month that redraws Greensboro’s City Council districts. The law did away with at-large representation, created a council of eight members elected from districts and a mayor chosen by the entire city. Under the new law, the mayor wouldn’t have voted except in the case of a tie or in some personnel matters. The law also extended council terms from two years to four, moved the election to October, with a November runoff, and prevented the city from altering its form of government or changing the council district lines. That made Greensboro the only municipality in the state without that ability.

The city sued over the law, arguing that by singling Greensboro out, the law violated provisions of the North Carolina and U.S. constitutions that guarantee equal protection.

Councilman Justin Outling, a lawyer, said it was a strong argument that ultimately won the day.

“The judge recognized the validity of our claims with regard to the law and its discrimination against Greensboro’s residents,” Outling said. “Certainly the General Assembly’s actions were unfair to the citizens of Greensboro, who deserve better. That conclusion was supported by the judge today.”

“We listened to the people and they told us to fight it,” Fox said. “To those people who said it wasn’t worth it, I think we can officially say today that it was. The court has spoken.”

Councilwoman Nancy Hoffmann said it’s good to have clarity after months of uncertainty.

Councilman Tony Wilkins, the only council member to defend parts of the law, agreed.

“The judge has ruled,” Wilkins said. “So I’m glad we can move on and prepare for the next election.”

While most of the council celebrated the judge’s decision, several said they realize the redistricting struggle isn’t over.

“I am sure that the General Assembly has a Plan B,” Vaughan said. “I’m waiting for it.”

When N.C. Attorney General Roy Cooper declined to defend the law, the General Assembly decided not to hire outside attorneys — essentially leaving the law undefended in Thursday’s hearing.

Because the city is likely to win in a final trial as well, Vaughan said, she believes the General Assembly will try another redistricting bill between now and the 2017 election.

Senate Bill 36, the original plan to redistrict Greensboro, is still active and sitting in a House committee. Legislators could retool that bill, removing the pieces that made it vulnerable in the city’s lawsuit and pass a new version.

“I would be surprised if the legislature, especially the House, has the appetite to revisit this,” Vaughan said. “But we’ll see.”

Greensboro redistricting: One battle down, war to come

Last week, the City Council won a first victory in a federal lawsuit, halting a controversial redistricting law. But the fight isn't over.

Federal Judge Catherine Eagles will hold the first hearing today in the lawsuit over a controversial city council redistricting law. But as at…

Hightower looks on outside the federal courthouse in downtown Greensboro. They spoke with the media before walking in the courthouse

Guilford County Attorney Mark Payne leaves the courthouse. He represented the elections board, which was named in the suit.

Talking to the media outside the federal building in downtown Greensboro after a court hearing in July over a new state law revamping the City Council are (from left) Councilwomen Marikay Abuzuaiter and Sharon Hightower and Mayor Nancy Vaughan.

Attorney Jim Phillips refers to a map of the new council districts.