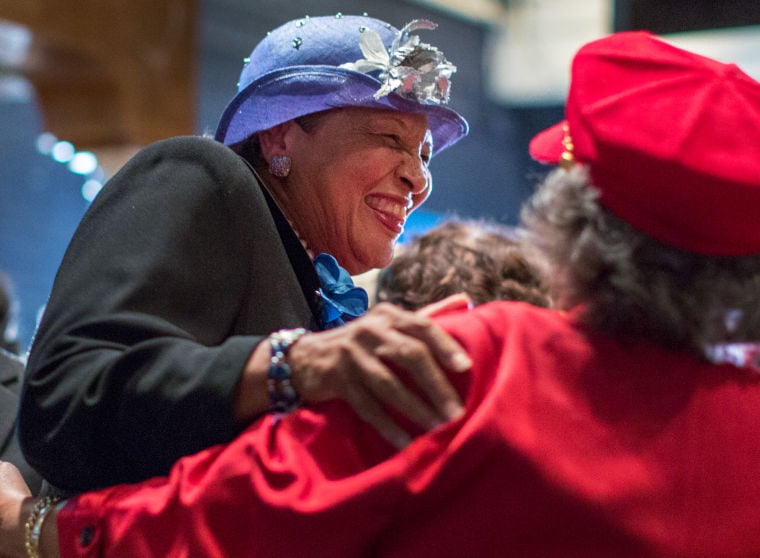 Alma Adams (left) celebrates with a supporter after winning the election for the unexpired term of the vacated U.S. House of Representatives 12th district seat at Mr. Boston's House of Jazz, in Greensboro, North Carolina, Tuesday, May 6, 2014. Adams also won the Democratic primary for the general election. 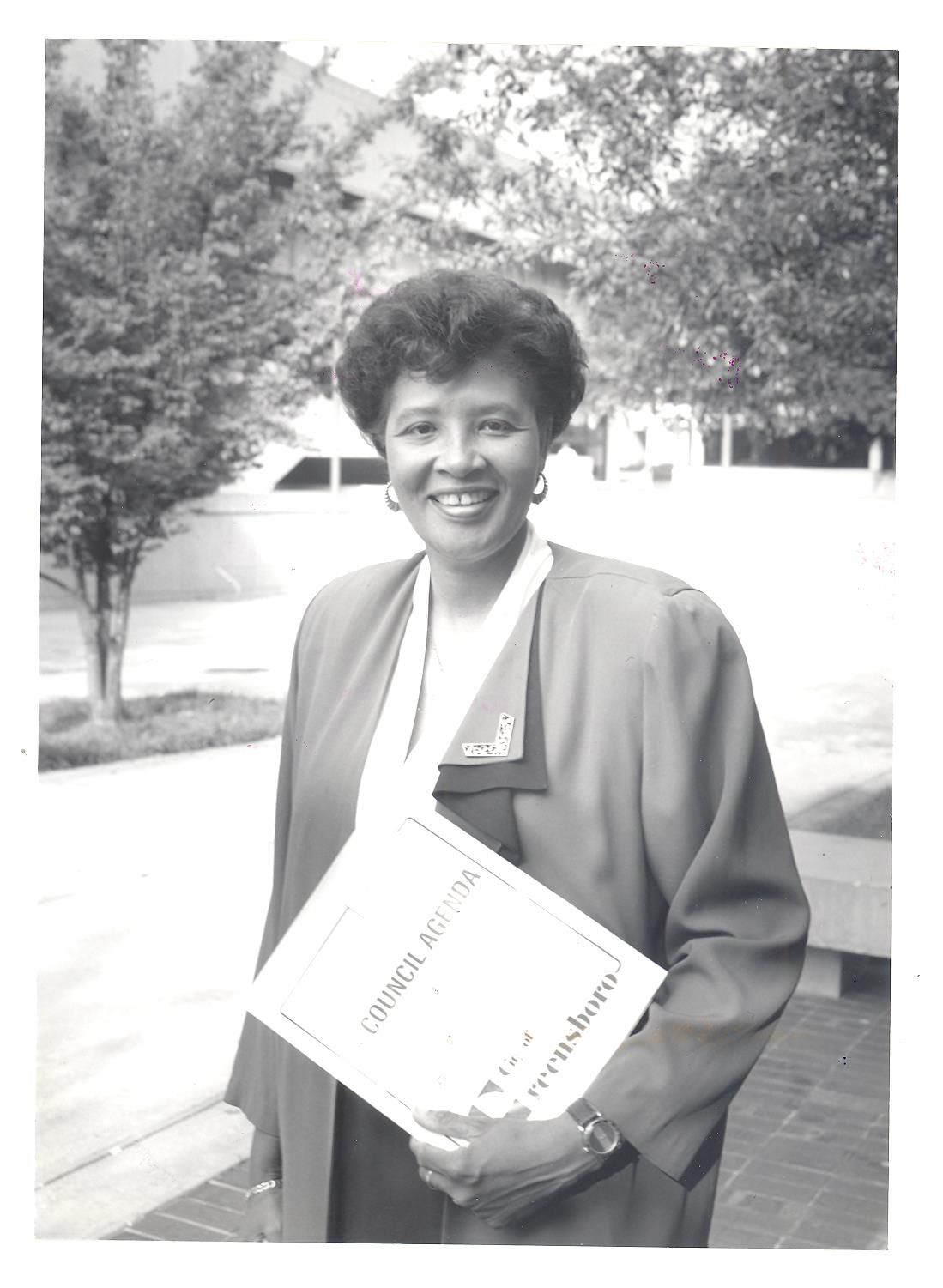 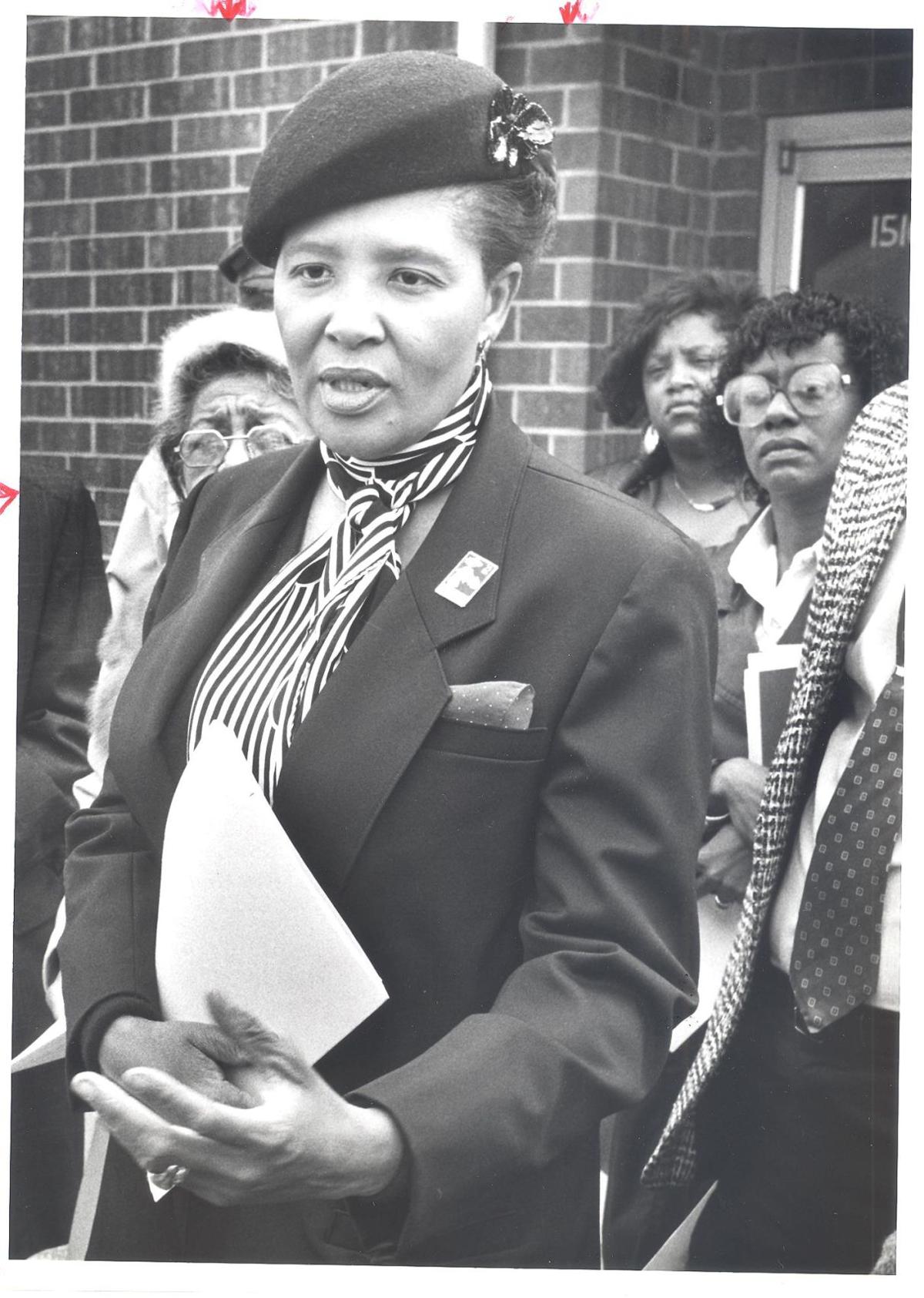 She started 30 years ago as a single mother who wanted to make the local school system better for her two kids.

After more than 20 years in the N.C. House, today may be Rep. Alma Adams’ last official work day as a state representative.

Adams, a Democrat, is attempting to continue her career in the U.S. Congress, as the representative for North Carolina’s 12th Congressional District. She’s running against Charlotte Republican Vince Coakley in the heavily Democratic district.

If she wins on Nov. 4, she will be sworn in almost immediately to fill the empty seat. And since the General Assembly expects to reconvene after the election, this could mark Adams’ last session as a state legislator.

“Leaving the General Assembly, it’s bittersweet,” Adams said this week. “But I believe we have made some significant accomplishments.”

Adams, 68, was born in High Point and grew up in New Jersey.

Her mother was a domestic worker. Adams often cared for her older sister, who suffered with sickle cell disease.

Adams moved back to North Carolina to attend college at N.C. A&T. She wasn’t academically prepared and had to take remedial courses to catch up.

She went on to earn a doctorate and become an art professor at Bennett College.

“Where you start out in life doesn’t have to determine how far you go or where you will end up,” Adams said. “I am a testimony to that.”

She got into politics in 1984, spurred by the city school board’s decision to close schools in African American neighborhoods.

She became the first African American woman to be elected to the school board.

It was a tumultuous time.

“It was something that Greensboro wasn’t ready for,” said Katie Dorsett, a former state senator from Greensboro.

“They thought she was too aggressive.”

Adams and fellow African American board member the Rev. Michael King butted heads with their colleagues and with school administrators.

They pushed for more African Americans to be hired as principals, and they questioned policies that allowed white students to transfer out of majority-black schools.

At one point, Adams and King threatened to resign because of what they saw as black people being treated as second-class citizens in the school system.

They were unabashed in their outspokenness. Adams said she was labeled a “militant black professor.”

“I felt that I was unduly criticized,” she said. “I spoke out. I felt that I should, but some of the community felt offended by many of the things we tried to focus on.”

It showed at the polls. In 1986, Adams beat her opponent handily in her district primary. But her opponent won by a wide margin in a citywide vote in the general election.

Adams ended her school board career after only one term.

But ideas that she pushed then are now guiding principles in Guilford County Schools — such as a measure to set higher academic requirements for students who want to participate in athletics.

“Education has always been dear to me,” Adams said. “I think that is going to be the way out for our students. It is clearly the pathway. It undergirds everything you do.”

By 1987, Adams took on a new role: Greensboro councilwoman.

And she brought her same brand of aggressive advocacy to that board.

“Initially, she scared the bejeebers out of me. She was very forceful about her ideas,” said former Greensboro Mayor Carolyn Allen. “Over time, I came to appreciate that quality very much. You pretty well knew where Alma stood on things.”

On the council, Adams pushed for neighborhood revitalization in blighted east Greensboro.

“We had boarded-up housing, just terrible,” Adams said. “It just kind of kept the community from really progressing like they wanted to.”

It became an issue she would carry with her to the General Assembly years later.

In 1994, Adams was planning to run against incumbent legislator Herman Gist when he died. Adams was appointed to fill his unexpired term and later won the seat outright.

Among her first pieces of legislation: rules to toughen housing regulations and limit how long property owners could leave buildings boarded up.

She built a name for herself fighting for women’s issues, like adding a $20 fee on the divorce application that funds programs for displaced homemakers.

She fought for African American issues as well, in big and small ways — such as a bill meant to spur communities to change offensively named landmarks.

That was prompted by a constituent who told

Adams that she was traveling in another part of the state and passed a creek with a name that used a racial epithet. Adams drafted legislation she called “the N-word bill.”

“When the bill came to the floor, it was quiet,” Adams said. “No one wanted to talk about it.”

She didn’t always get the credit she deserved, said Earl Jones, who served with Adams in the legislature and on the City Council. Like when she pushed for research to determine whether the state’s historically black colleges and universities were in need of upgrades.

That turned into a $3.1 bil lion bond issue, approved by voters in 2000. It provided new construction and renovations at the 16 UNC campuses and 59 community colleges, including $314 million for A&T and UNCG.

“It became a bill that wasn’t just for HBCUs but for the entire university system,” Jones said.

Perhaps Adams toughest battle was the effort to raise the minimum wage. That was a bill she filed year after year.

She got the NAACP and religious and civic groups on board, as well as support from legislative leaders in both houses.

“I had to build coalitions to get that bill passed,” Adams said.

“Every year, she lost the vote in passing it, but she was persistent and consistent and principled,” Jones said. “That is where you have real honest leadership, where you believe in something and you continue to push it.”

1984: Elected to Greensboro School Board

1986: Lost re-election bid for school board

Read more news about local elections on our elections page.

Biden: US troops won't be moving into Ukraine

Biden: US troops won't be moving into Ukraine

WHITSETT, N.C. (AP) — A North Carolina woman killed in a crash while driving the wrong way on Interstate 40 on Thursday evening was reported m…

North Carolina mother dies after being thrown from car

GREENSBORO, N.C. (AP) — A North Carolina woman was killed Wednesday night in a rollover wreck after she was thrown from a car that was carryin…

CONCORD, N.C. (AP) — A North Carolina man is accused of fatally shooting his mother and trying to leave the scene, police said.

LEXINGTON, N.C. (AP) — A North Carolina man is charged with felony murder in connection with a shooting death, authorities said.

RALEIGH, N.C. (AP) — A North Carolina attorney has pleaded guilty for her role in a conspiracy in which she and others created credit profiles…

ROCKY MOUNT, N.C. (AP) — Police in an eastern North Carolina city were investigating Sunday the shooting death of a teenager found inside a home.

KNIGHTDALE, N.C. (AP) — A patient has died after the ambulance transporting her to a hospital went off a North Carolina highway amid icy condi…

CHARLOTTE, N.C. (AP) — A North Carolina man shackled to a floor while in police custody did not get help from police officers who watched him …

Alma Adams (left) celebrates with a supporter after winning the election for the unexpired term of the vacated U.S. House of Representatives 12th district seat at Mr. Boston's House of Jazz, in Greensboro, North Carolina, Tuesday, May 6, 2014. Adams also won the Democratic primary for the general election.