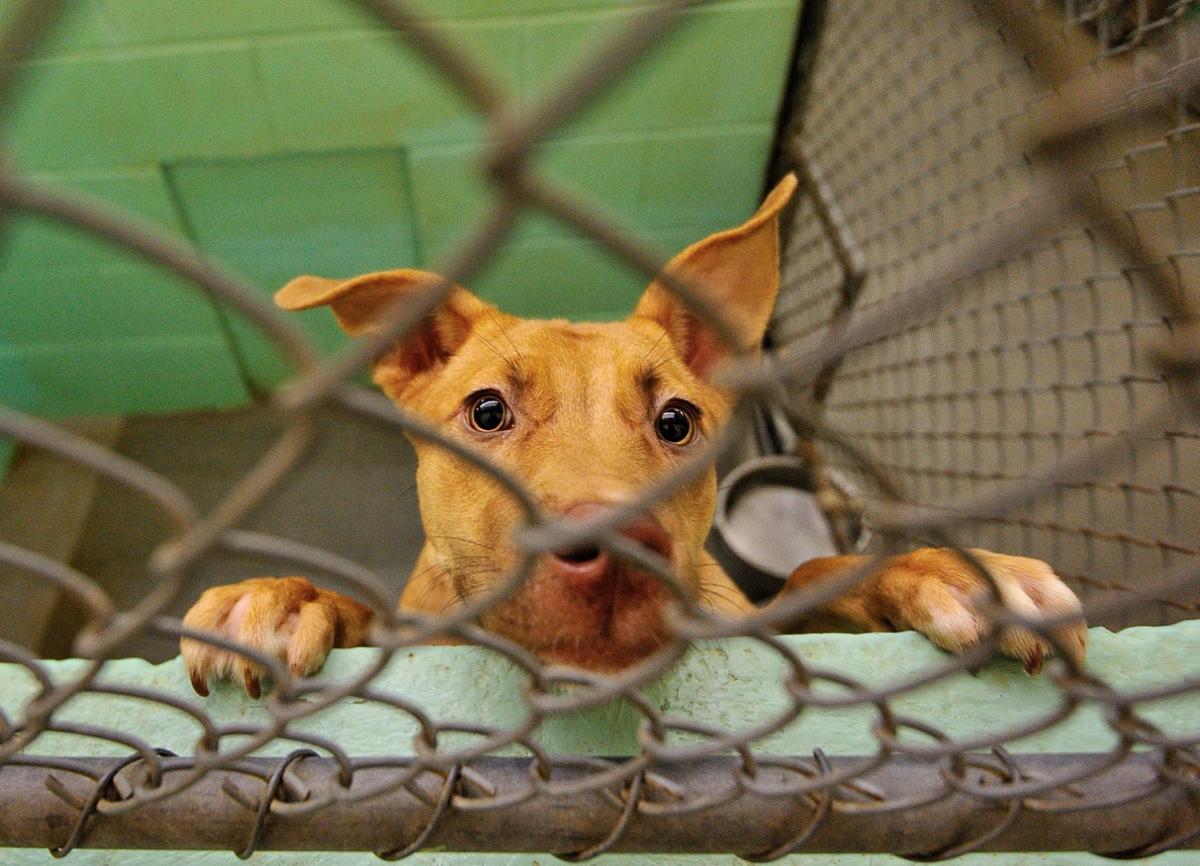 Izzy, a brown lab/pit bull mix, looks out from a kennel during an adopt-a-thon at the Guilford County Animal Shelter Saturday in Greensboro, N.C. 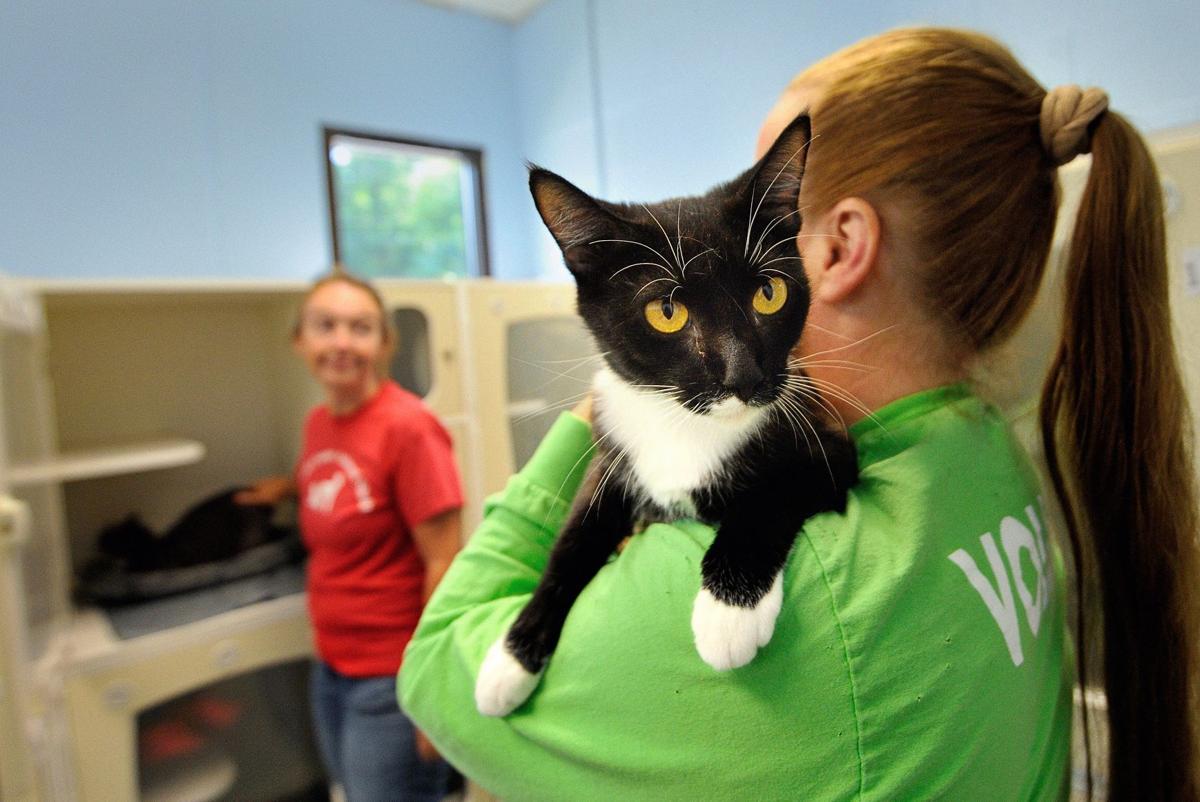 Volunteer Brenda Starner holds Destiny while Sue Andrews looks on during an adopt-a-thon at the Guilford County Animal Shelter on Saturday. 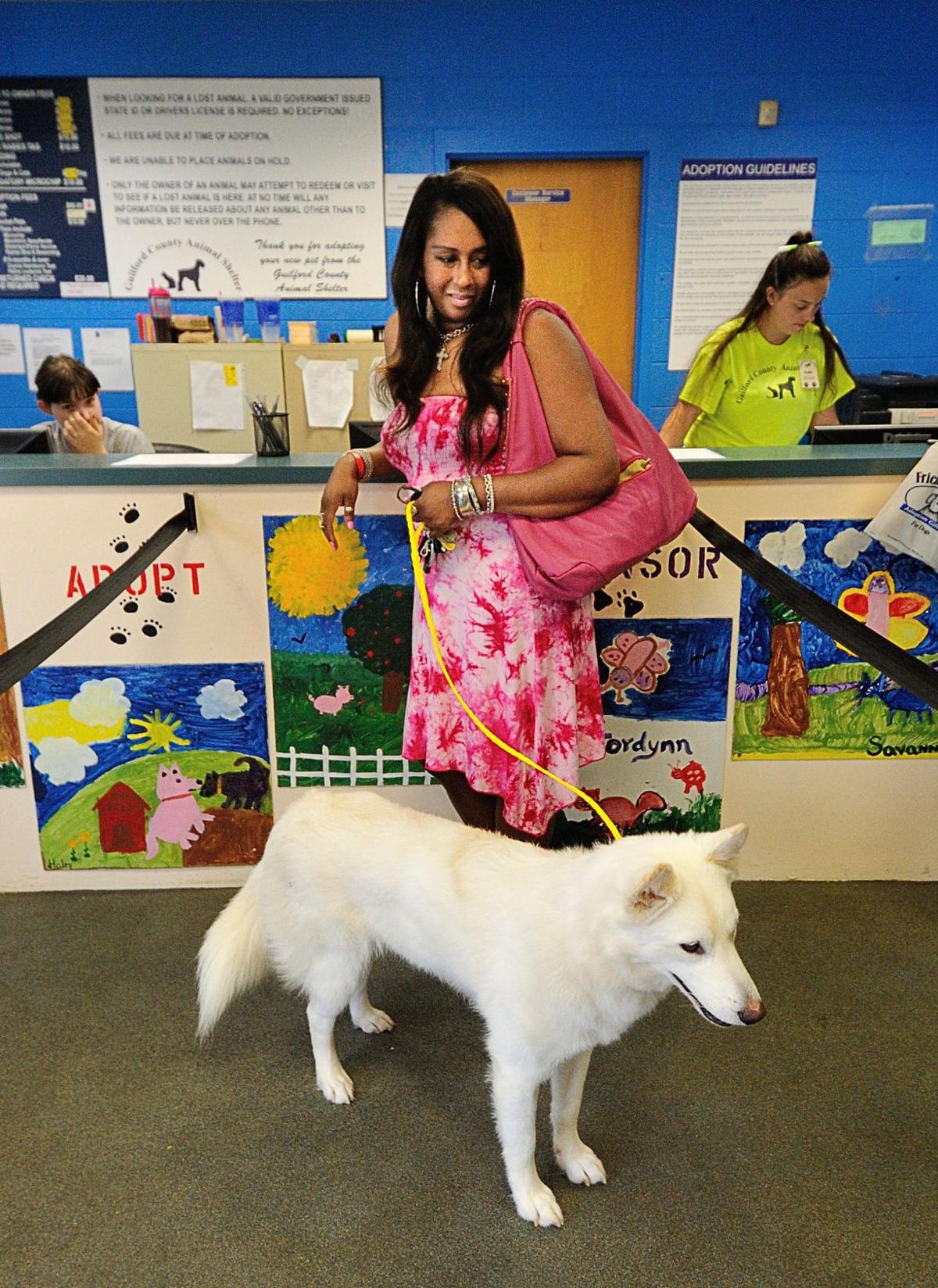 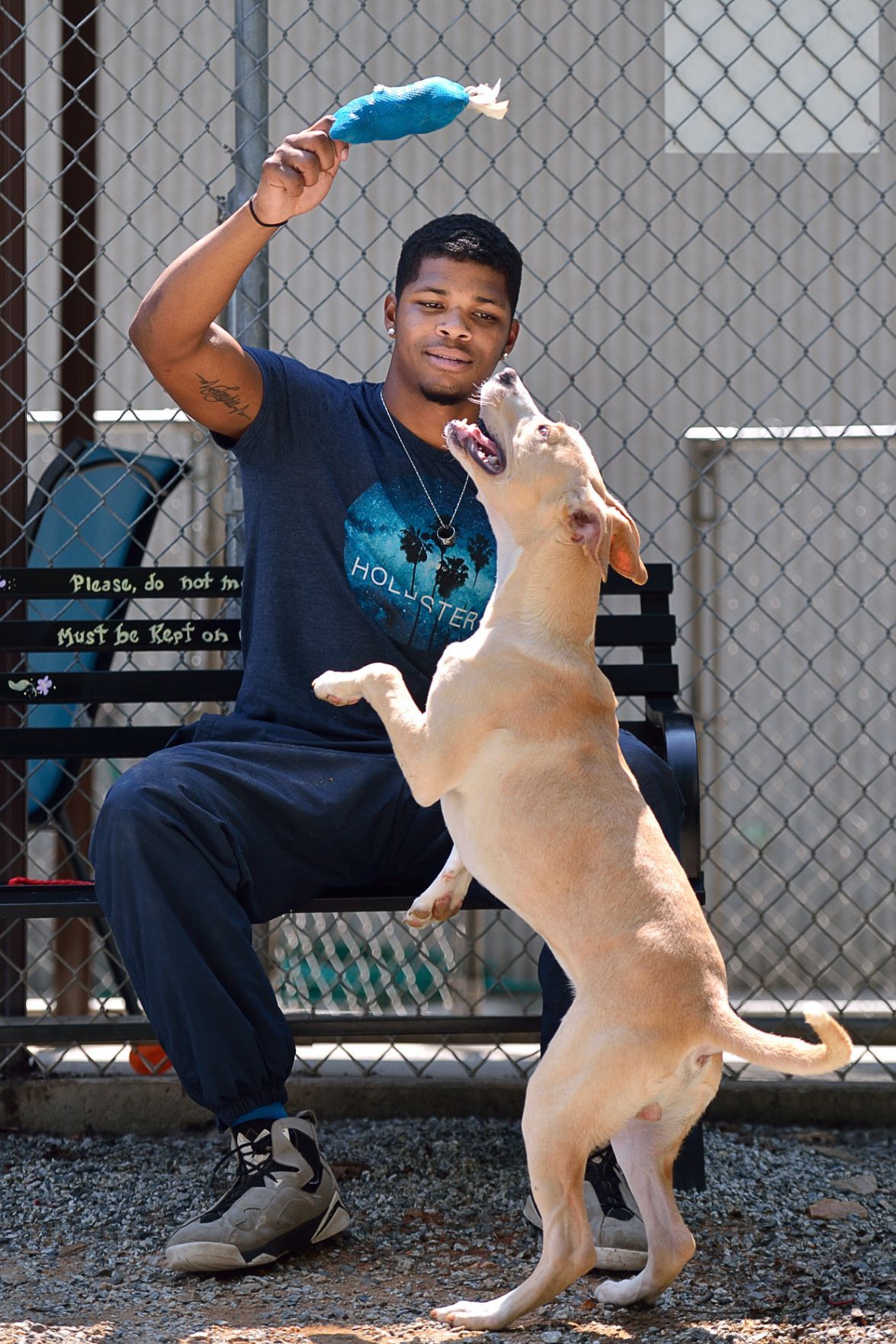 Tahlik Taylor plays with one of the dogs up for adoption at the Guilford County Animal Shelter Saturday, Aug. 22, 2015 in Greensboro, N.C.

Izzy, a brown lab/pit bull mix, looks out from a kennel during an adopt-a-thon at the Guilford County Animal Shelter Saturday in Greensboro, N.C.

Volunteer Brenda Starner holds Destiny while Sue Andrews looks on during an adopt-a-thon at the Guilford County Animal Shelter on Saturday.

Tahlik Taylor plays with one of the dogs up for adoption at the Guilford County Animal Shelter Saturday, Aug. 22, 2015 in Greensboro, N.C.

GREENSBORO — Dozens of people streamed into the Guilford County Animal Shelter to adopt pets when it reopened Saturday, nearly a week after closing to the public following an investigation into charges of cruelty and mismanagement.

“We expected an initial wave today because of the controversy and the news,” Grier said Saturday. “One of the things we always say is there are two things you don’t want to mess with — people’s children and their pets.”

Twenty animals found new homes Saturday and another 22 were placed with rescue groups, said Guilford County Animal Control Manager Logan Rustan, who is acting as the interim animal welfare agent for the shelter.

Rustan said people who stopped by the shelter on Saturday saw that changes have been made, and that the changes are “for the better.”

A happy white husky/German shepherd mix was one of the first to find a new home.

In a moment, the dog bounded over and licked the Jamestown woman’s face as she sat in the shade in a pen at the Guilford County Animal Shelter.

Matthews adopted Mattelin on Saturday, as the shelter kicked off an adopt-a-thon and opened to the public for the first time since closing on Monday. The shelter has resumed its regular hours, Rustan said, with adoption fees remaining at $95 for dogs and $50 for cats.

Guilford County closed the shelter Monday to assess the situation after taking over operations from the nonprofit United Animal Coalition, which had run the shelter for years.

Following months of complaints, rumors and allegations of cruelty and abuse leveled against the shelter, the N.C. Department of Agriculture on Monday revoked the United Animal Coalition’s license to operate animal shelters in Guilford and Davidson counties. The nonprofit suspended — then fired — shelter director Marsha Williams.

The state released the findings of its investigation Monday, noting more than 100 documented examples of animal cruelty at the Guilford shelter and abnormally large numbers of dead animals found in kennels at the Davidson shelter.

The Guilford County Sheriff’s Office and the Lexington Police Department, in conjunction with their respective district attorneys, are continuing separate investigations into unrelated reports of animal cruelty and potential misappropriation of county money.

The federal Drug Enforcement Agency is also investigating potential violations at both shelters.

Commissioners in both Guilford and Davidson counties voted Monday to terminate their respective contracts with the United Animal Coalition.

County staff members are managing the facilities on an interim basis.

Staff called in recognized animal rescue operators, who took in about 150 animals for adoption during that period.

The shelter still contained 607 animals Saturday morning. About 200 were ready for adoption.

Staff had to euthanize animals that were “very sick,” Rustan said. But all were seen by veterinarians before that step was taken.

“Many animals were taken off the euthanasia list,” he said.

“The two top priorities for today are to get as many animals into new homes as we can and to earn the community’s trust,” he said Saturday. “We wanted to reassure the public that new people are here to take care of the animals.”

Beverly Levine, who has volunteered at the shelter for about 10 years, said working with the animals without the public was unusual.

“A lot of us were in rooms, by ourselves with the animals, just giving them attention,” she said. “It just felt good to be with them.”

Prospective pet parents included Brandy Areno, who went to the shelter for a specific tabby cat.

Areno adopted Jacob, who had been in the same cage as a cat Areno’s mother adopted about two weeks ago.

Tahlik and Genesis Taylor sat on a bench in an outside dog run and threw a tennis ball for Harley to retrieve. Harley, a 5-month-old light-brindle-color Labrador retriever/pit bull mix, scrambled to the ball then ran to stand by the bench on which the couple sat.

Genesis Taylor agreed with her husband and offered that he’d make a good family dog.

The couple had arrived early, so they could be choosy about which dogs they interacted with.

“We were looking for something smaller,” Tahlik Taylor said, “but kind of fell in love with this one.”

As early as the Taylors arrived, they didn’t beat Matthews.

“I wanted to be first,” she said with a smile. “I got my pick of the litter, literally.”

Marsha Williams had been previously suspended with pay while the N.C. Department of Agriculture and several law enforcement agencies conducted…

GREENSBORO — After months of complaints, rumors and allegations of animal cruelty and abuse, the N.C. Department of Agriculture on Monday revo…

Updated 11:26 a.m.GREENSBORO — Citing “a systemic failure to care for animals,” the N.C. Department of Agriculture on Monday revoked the Unite…

Guilford animal shelter's troubles go back to the late 1990s

A law enforcement official walks through the Guilford County Animal Shelter in Greensboro on Friday, when authorities searched it for a second…

An officer removes a computer Friday from the administrative office at the Guilford County Animal Shelter in Greensboro.GREENSBORO — The Guilf…

Updated 3:31 p.m.GREENSBORO — Lexington police and the District 22B District Attorney’s Office have confirmed they are searching the Guilford …

GREENSBORO − Marsha Williams, director of the Guilford County Animal Shelter, has been suspended with pay in the wake of ongoing investigation…

The investigations into abuse come after months of complaints and accusations from volunteers, shelter employees and the public.GREENSBORO — F…

What: Adopt a pet

Sickness is down and pet adoptions are up since Davidson County took control of its animal shelter from outside operators whose license was revoked last month amid allegations of cruelty and misconduct.

Charges are expected following an investigation by the DEA and N.C. Dept. of Agriculture of the company that runs the animal shelter.