GREENSBORO — A video of a local man lying face down in a yard while being handcuffed by a Greensboro police officer, shared widely on the Internet, has prompted a community activist to ask for an investigation of what he calls an “unprovoked, unnecessary and seemingly irrational abuse of power.”

How far removed is Ferguson, Mo. from Greensboro?

Johnson is co-pastor of Faith Community Church and executive director of the Beloved Community Center, a group that in January founded its own unofficial police review group.

In his letter, Johnson gives his account of an encounter the Scales brothers had with Greensboro police Officer T.B. Cole, a sequence captured on cellular telephone by Devin Scales with Rufus Scales on the ground and being handcuffed by Cole that concludes with another officer grabbing for Devin Scales’ phone and ending the video.

Officer Cole arrested Rufus Scales and cited Devin Scales at 6:38 p.m. on Aug. 4. The brothers were walking along Memphis Street. It’s a neighborhood where Johnson said the brothers’ grandmother lives. Police incident reports also list an address in the 500 block of Memphis Street as the home of both brothers.

Rufus Scales is charged with being intoxicated and disruptive, impeding traffic and resisting a public officer. Devin Scales, 22, was cited for standing “upon a highway or street in such a manner as to impede the regular flow of traffic.”

In a telephone interview Tuesday evening, Rufus Scales acknowledged having one beer beforehand, but denied that he was intoxicated.

Both brothers also said there was no traffic in the neighborhood at the time.

The details of the arrest as depicted on the video prompted not only Johnson’s letter but an official inquiry into Cole’s actions.

Miller said Tuesday that he has received the letter from the Beloved Community Center and that the department’s Professional Standards Division is investigating.

If a complainant is unsatisfied with the Division's findings, they can ask to have the city's Complaint Review Committee look at the matter.

(Information has been corrected to fix an error. See Correction at end of story.)

“We’re aware of the complaint, and we’ll gather the facts and the data,” he said. “I do know that at the scene that day there were a couple of people who came up to the sergeant who saw what happened, and they stated they would be witnesses, because they felt the officer acted appropriately.”

Miller said he has not seen the video, but that it has been described to him.

“It seems like the video only captures the latter part of the encounter where the officer is arresting one of the brothers....There is a whole lot more that precedes where the video picks up.”

Miller also said at least one officer present at the arrest was wearing a body camera.

On Tuesday, Devin Scales said that he and his brother were walking to a nearby store, when the officer drove by and allegedly yelled, “Hey, you morons get off the road.”

“We didn’t say anything, we just moved closer to the curb,” Devin Scales said. “We weren’t really in the road, and we weren’t bothering traffic, because there was no traffic flow. ... And there are no sidewalks there. None.”

Devin Scales said Cole then “slammed on the brakes,” and asked the brothers to show him their IDs.

“We asked ‘What is this for?’ ” Devin Scales said.

Devin Scales said he tried recording at that point, but that Cole tried grabbing his camera.

After the brothers gave over their IDs, they said, they kept asking why they were stopped. Rufus Scales acknowledged using a curse word at one point during the exchange, which he said was what prompted Cole to arrest him. It was then that Devin Scales began recording.

In Devin Scales’ 60-second clip, posted on the site photographyisnotacrime.com, Liveleak.com and included on various Facebook pages, Rufus Scales is seen face down and with his hands behind his back. He can be heard asking, “What did I do?” and telling his brother, “Make sure you get this on camera, too. I ain’t doing nothing.”

Cole can be heard telling Rufus Scales, “You cannot sit there and run your mouth and start cursing out in the middle of the street.”

Devin Scales narrates the footage as Cole talks into his radio and cuffs Rufus Scales.

Devin Scales says on the video that he and his brother walked into Memphis Street and were followed by the police car, which had been parked nearby. He pans the camera to show a residential neighborhood without sidewalks near the intersection of Memphis and Atlanta streets.

“I don’t know where you live,” the officer says on the video. “All I know is that you are out in the middle of the road.”

Two more police cruisers are seen arriving, and one officer can be heard saying, “Get back.” A hand reaches out, the camera shakes and then goes dark.

A report of the incident by Greensboro PD states that Rufus Scales appeared intoxicated, blocked and interfered with traffic and was swearing. The report also states that he did not stop when told to do so and that he physically resisted the officer.

The allegations made by police are not seen on the video. Rufus Scales, who was arrested and released on $50 bond, said Tuesday that the only time he cursed during the incident was he and his brother had asked what they were being stopped for.

On Tuesday, Greensboro police spokeswoman Susan Danielsen declined to release a copy of the letter sent to the department. She said police consider it part of the officer’s confidential personnel file.

She also said police would not release police body camera footage because a complaint has been filed.

Danielsen said Cole, 33, remains on duty. He has been with Greensboro Police since 2008 and has had no previous disciplinary incidents or investigations related to his conduct, Danielsen said.

Johnson and the Beloved Community Center have objected to the police’s use of force against young African Americans, including a 2013 incident involving Bennett College students in which one officer was fired and another was suspended.

The arrest of Rufus Scales took place five days before the shooting death of 18-year-old Michael Brown, who was shot by police in his neighborhood in Ferguson, Mo., and in his correspondence Johnson writes that Rufus Scales’ arrest is “frighteningly similar” to the events surrounding the shooting of Brown, a young, black man who police said was walking in the middle of the street.

“The difference is that the Scales incident did not escalate into a situation of someone being shot. But all the elements were there!” Johnson wrote.

When reached by phone Tuesday, Johnson declined to comment on the letter or the situation with the Scaleses.

The description of the event’s similarity to the events in Ferguson was included in a 7-page account of the brothers and the center’s view of the arrests that was attached to the letter.

Johnson called the arrest part of the police culture that needs changing, writing that Cole “assumes that two young black men walking on the street had to be guilty of something.”

Miller said he has tried being proactive with community outreach and addressing conflict between police and the public.

“We take our relationships with the community very seriously,” said Miller, who leaves his job Aug. 31 to become police chief in Greenville, S,C. “And we will continue to work to improve our relationships with all members of the public. And we have processes in place to address scenarios where officers may not act appropriately.”

Devin Scales said he’s glad the video has gotten so much exposure.

“I wanted to make this as public as I possibly could,” he said. “This has been going on for some time, getting harassed and now I have a way to record it.”

The Greensboro Police Department’s Professional Standards Division is currently investigating a complaint concerning the arrest of Rufus Scales on Aug. 4.

The entity handling the matter was misstated in this story when first published Tuesday at 11:59 p.m.

Video spurs Greensboro ministers to call for police review board

Trust is lacking between the police department and the black community, local ministers said.

Miller: 'We have a department moving forward' (videos)

How far removed is Ferguson, Mo., from Greensboro? Maybe not quite far enough.

How can authorities restore order in Ferguson?

FERGUSON, Mo. — The city of Ferguson, Missouri, says it working hard to better connect with the community and learn from the "discord and hear…

The U.S. Department of Justice has sent lots of resources to Ferguson, MO. to investigate the shooting an unarmed black 18-year-old by a white police officer.

The protest was one several Greensboro events over the past week related to the killing of Michael Brown.

It’s unclear what effect the group will have on police policy and what access it will have to police records.

State Sen. Gladys Robinson holds a meeting at Bennett College to talk about concerns over police response to a noise complaint April 27. 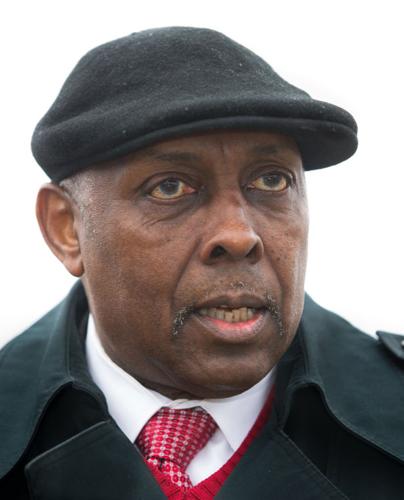