GREENSBORO — Three private schools in Guilford County have been mistakenly included in reports listing COVID-19 clusters — much to the surprise of their administrators — but exactly how they got on the list remains unclear.

The N.C. Department of Health and Human Services produces the report using data provided by county health officials throughout the state. And while a spokeswoman with Guilford County’s health department tried to explain the reversal, noting that the collecting of data is complicated, she stopped short of expounding on why so many schools erroneously appeared on the report.

Since the pandemic began, the weekly reports have been tenuous by nature. Their introduction notes that the data is preliminary and numbers can change as more information is discovered. But the reports can give a snapshot of how the disease may be spreading at schools or day cares.

As defined by the state, clusters are a minimum of five confirmed COVID-19 cases associated with schools or day cares. Those cases are detected within a 14-day period with “plausible epidemiological linkage.” That means those tested positive were together in the same area at the same time when exposure to the disease was likely.

When the Sept. 14 report was released, officials at all three of the schools and a fourth on the list — Greensboro Academy — told the News & Record the numbers were inaccurate or that the likely source of the cases came from outside of their schools.

The News & Record contacted Guilford County health department spokeswoman Kenya Smith Godette early Tuesday about concerns that schools were being erroneously added to the report. She said that the Sept. 14 report had been revised and sent the News & Record a copy which noted that the COVID-19 cluster at High Point Christian Academy “was listed in error and had been removed.”

When asked via email for an explanation for the error, Smith Godette said: “As far as specific questions about the cause of the error, that is an internal matter. Tracking COVID cases is a detailed process that includes input from various agencies. Our sole focus is the health and safety of the Guilford County community and doing what we can to ensure that.” 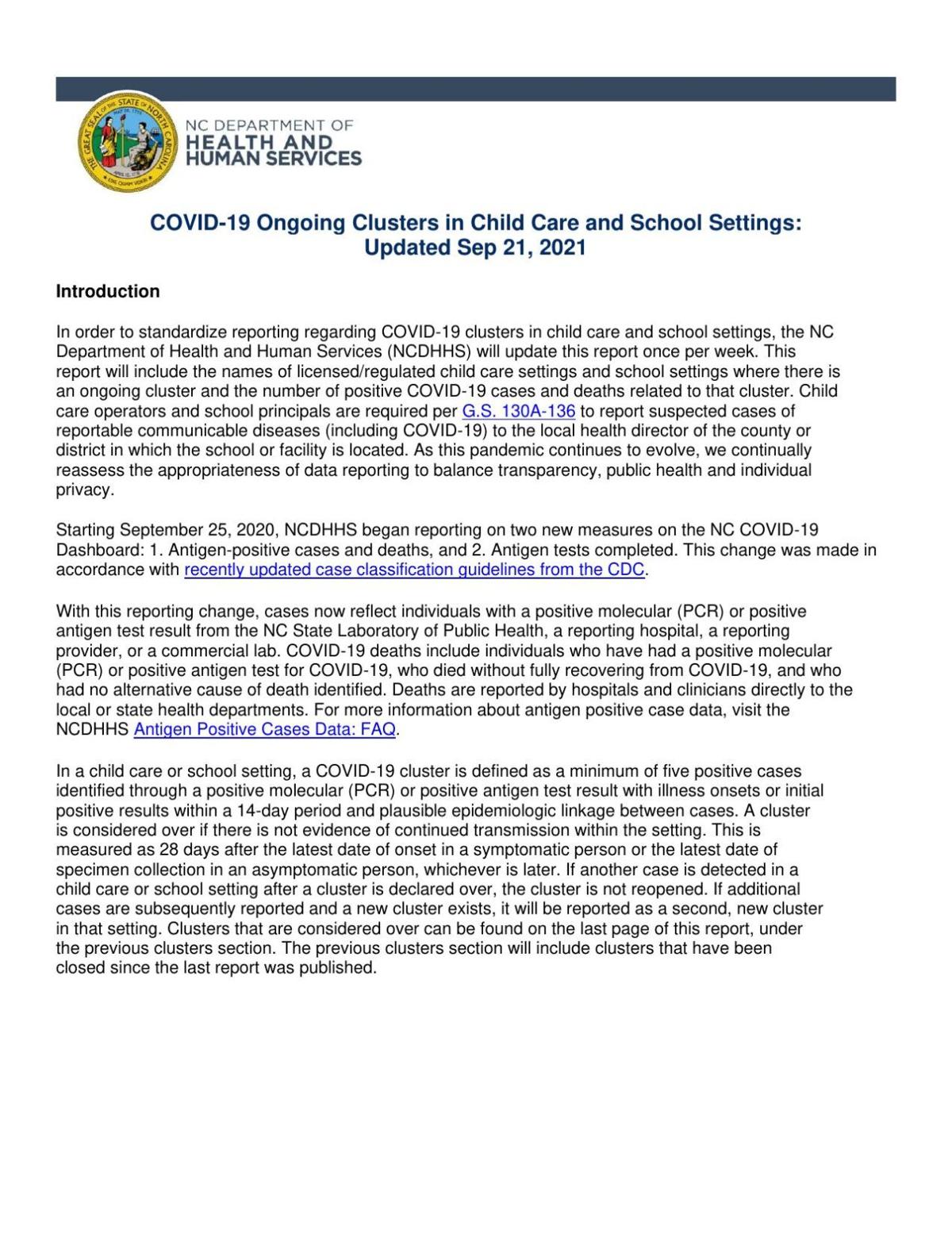 When asked about the other schools, whose status had not been dropped from the revised report, Smith Godette said a new report would be issued at 4 p.m. Tuesday.

On that report, Triad Math & Science Academy and Greensboro Day School disappeared from the updated listings. However, no explanation was given on the report as to why they weren’t listed.

Kelly Haight, a spokeswoman for NCDHHS, said in an email Wednesday that these two clusters also were mistakenly reported.

“They were reported as clusters, but then later the (local health department) determined they were not clusters. So they came off the report,” she said.

“We’ve been meeting a lot about the situation, making a lot of calls to make sure that it was corrected,” Van Hagen said.

Jeff Topham, director of strategic communications for Greensboro Day School, also was happy “the report has been fixed.”

Jennifer Lambert, advancement director at High Point Christian Academy, said the school’s appearance on the list took officials there by surprise. However, she also praised the county health department’s staff and said they apologized for the error.

“We appreciate the hard work all of the medical professionals do, with all that’s going on,” Lambert said.

Greensboro Academy continued to be listed on the state’s report Tuesday, with seven cases among students. However, Principal Tracey Duhaime told the News & Record last week that the school should not be included on the list because “there is no plausible epidemiologic linkage between cases.”

Once a report is received, Smith Godette said in an email Wednesday that “the school Public Health team investigates the case by contacting the positive staff member or parent of the positive student to determine isolation dates and other individuals potentially exposed in the school building.”

Anyone potentially exposed is included in an electronic contact-tracing program that notifies them and provides monitoring, Smith Godette said.

In a Sept. 13 report, state health officials said that, as of August, clusters in K-12 settings are at the highest level since the pandemic occurred. Most schools resumed in-person classes at the beginning of this school year.

Biden honors Powell as 'a dear friend and a patriot'

Across the five years before the pandemic, the district's enrollment, including pre-K, dropped by 450 students, according to a News & Record analysis of data provided by the district. Within the last two years it dropped by another 3,367.

Ask a Reporter: Trying to get an appointment for license renewal is difficult

Also, how do you remove mildew stains from clothes?

Recording of the service will take place on HPU's campus at 6:45 p.m. Oct. 26 in the Hayworth Fine Arts Center. The program will air on Christmas Eve on ABC affiliates across the country.

Mark A. Hoffman has long gray hair, blue eyes and is approximately 5 feet 9 inches tall and weighs 230 pounds, according to information from the N.C. Center for Missing Persons.