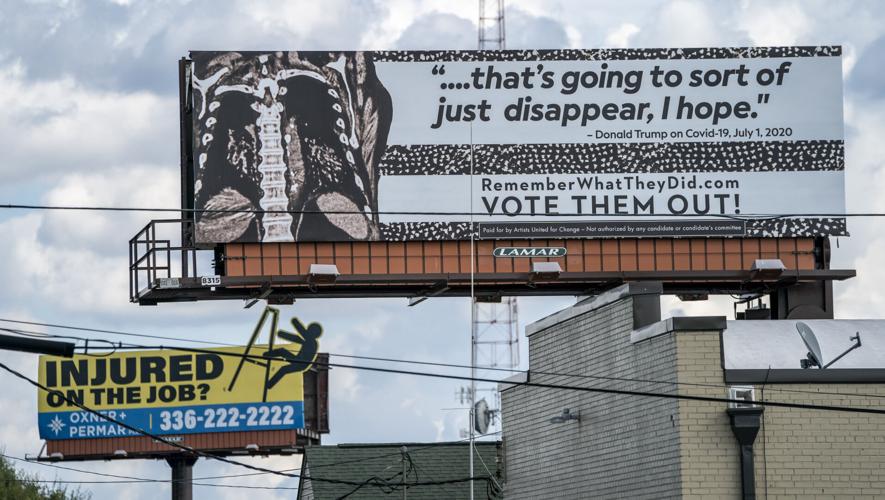 Artists United for Change created a series of anti-Trump billboards to place across the country, including this one at 1302 E. Wendover Ave. in Greensboro. 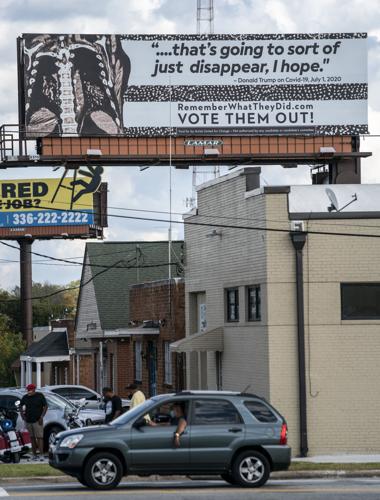 Artists United for Change created a series of anti-Trump billboards to place across the country in battleground states like North Carolina. Several have been placed in the Triad, including this one at 1302 E. Wendover Ave. in Greensboro.

GREENSBORO — Street art and billboards with anti-Trump messages are popping up in Greensboro and across the country in states considered “battlegrounds” in this year’s presidential election.

It’s all part of a nationwide "RememberWhatTheyDid" campaign.

“We are connecting what has been said and done with the importance of voting," Robin Bell, artist and project co-founder of Artists for Change, said in a news release. "Our message is simple: Remember what they did and vote them out.”

Twenty anti-Trump billboards have gone up in cities across North Carolina, nine of which are scattered across Greensboro, according to the group. Nationwide, the campaign is responsible for about 200 billboards and thousands of street posters in Michigan, Ohio, Wisconsin, Arizona and Pennsylvania.

A Greensboro Republican decried the billboards as an example of "hate and fearmongering" by Democrats.

"These billboard signs are stereotypical of what we should expect in any marketing campaign from the far left — crude, factually inaccurate and filled with hyperbole," said Chris Meadows, a Republican candidate for the District 57 seat on the N.C. House of Representatives.

According to Artists for Change, award-winning artists created works to target communities that tend to be underrepresented at the polls, including Black, Latinx and young voters. The billboards take a jab at the president's response to the coronavirus and his stances on immigration and police brutality and racism.

In Greensboro, two artists designed billboards criticizing Trump's response to the pandemic, though neither artist is from the area. The nine billboards in prominent locations around the city feature one of the two designs.

One of designs, which can be seen on West Wendover Avenue at Edwardia Drive and again at Elm-Eugene Street at Florida Street, showcases a caricature of Trump shouting over a field of grave markers. Beside him, the words, "It affects virtually nobody," referencing a Sept. 21 statement Trump made about COVID-19. Justin Hampton, a widely recognized rock poster artist, is responsible for the billboard.

A second billboard in Greensboro by Nate Lewis, a former ICU nurse turned artist, features an X-ray of a person's lungs. Beside the black and white image is a July 1 Trump quote, also a commentary on the coronavirus: "... that's going to sort of just disappear, I hope."

People who see the billboards and art are urged to go to RememberWhatTheyDid.com. There, they can pledge to vote, register to vote and learn about early voting.

Co-founder Scott Goodstein, who worked on the Obama 2008 and Sanders 2016 campaigns, said some 40% of voters aren't reached by usual political advertising. Many of those voters are in the communities that are underrepresented in the polls.

"In an election year this important, we cannot allow any of our communities to be overlooked," Goodstein said in the release. "We are generating enthusiasm and are excited to take this groundbreaking program to the neighborhoods where voter turnout can make the difference in this election."

The deputies had responded about 8:15 p.m. to 6705 Long Meadow Drive and found the two victims. Both were pronounced dead at the scene, the Guilford County Sheriff's Office said Sunday in a news release.

A 4-year-old girl who was not properly restrained was killed in crash Sunday, Greensboro police say.

The 4-year-old girl was in the back seat of her uncle's 2004 Toyota Camry, not in a child restraint seat, when he ran a red light and hit a 2016 Kia Sorento, police said in a news release.

Officers responding to a report of shots fired at 6:50 p.m. Saturday in the 2600 block of Donlora Drive found Xavier Ramon Wells wounded, police said in a news release. He was taken to a local hospital and later died, police said Sunday morning.

Jeffery Bernard Ellerbe, 39, of Hoffman was also charged with possession of a firearm by a felon, speeding 103 mph in a 35 mph, careless and reckless driving and driving while licensed revoked, police said Monday in a news release.

The Greensboro nonprofit is still providing services, but its 86 beds are not available, officials said.

Police are investigating several cases where a two-person team of thieves targets unwary shoppers with one distracting the shopper with a question while the other takes their wallet from a purse or bag sitting in their cart, police said in a news release.

History in the remaking: Two 'iconic' Summerfield buildings have plenty of suitors

Two historic properties in the heart of this Guilford County town are for sale and one is under contract.

On Wednesday, Crime Stoppers released photos taken from surveillance footage of a man authorities say "may have knowledge and information" for their investigation, according to a news release.

Officers responded about 1:15 p.m. to the Wells Fargo Bank at 308 Pisgah Church Road and found that a robber took an undisclosed amount of cash.

Artists United for Change created a series of anti-Trump billboards to place across the country, including this one at 1302 E. Wendover Ave. in Greensboro.

Artists United for Change created a series of anti-Trump billboards to place across the country in battleground states like North Carolina. Several have been placed in the Triad, including this one at 1302 E. Wendover Ave. in Greensboro.