Friday's COVID-19 update: Guilford County has documented 700 deaths since the beginning of the pandemic, according to state data 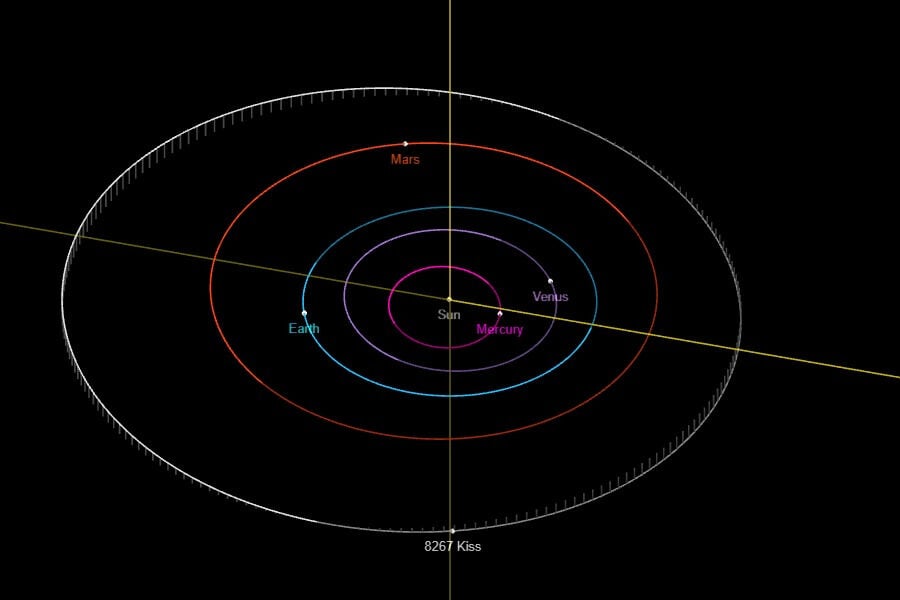 The position of the 8267 Kiss asteroid — nearly 223 million miles from the sun — is shown here on April 13. In August, the asteroid will come within about 110 million miles of Earth and will be easier to spot. 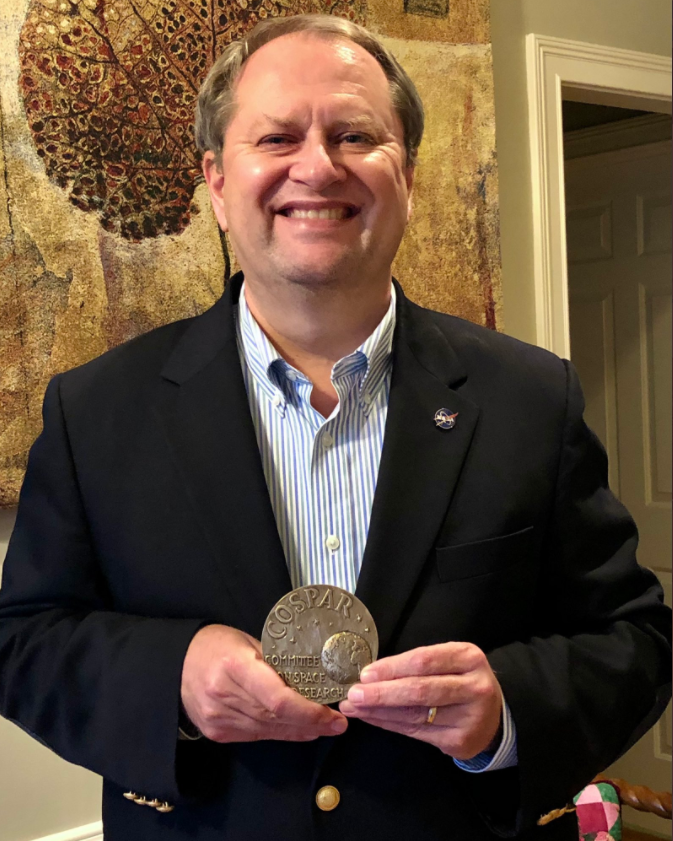 UNCG dean John Kiss with the International Cooperation Medal he was awarded by the Committee on Space Research. 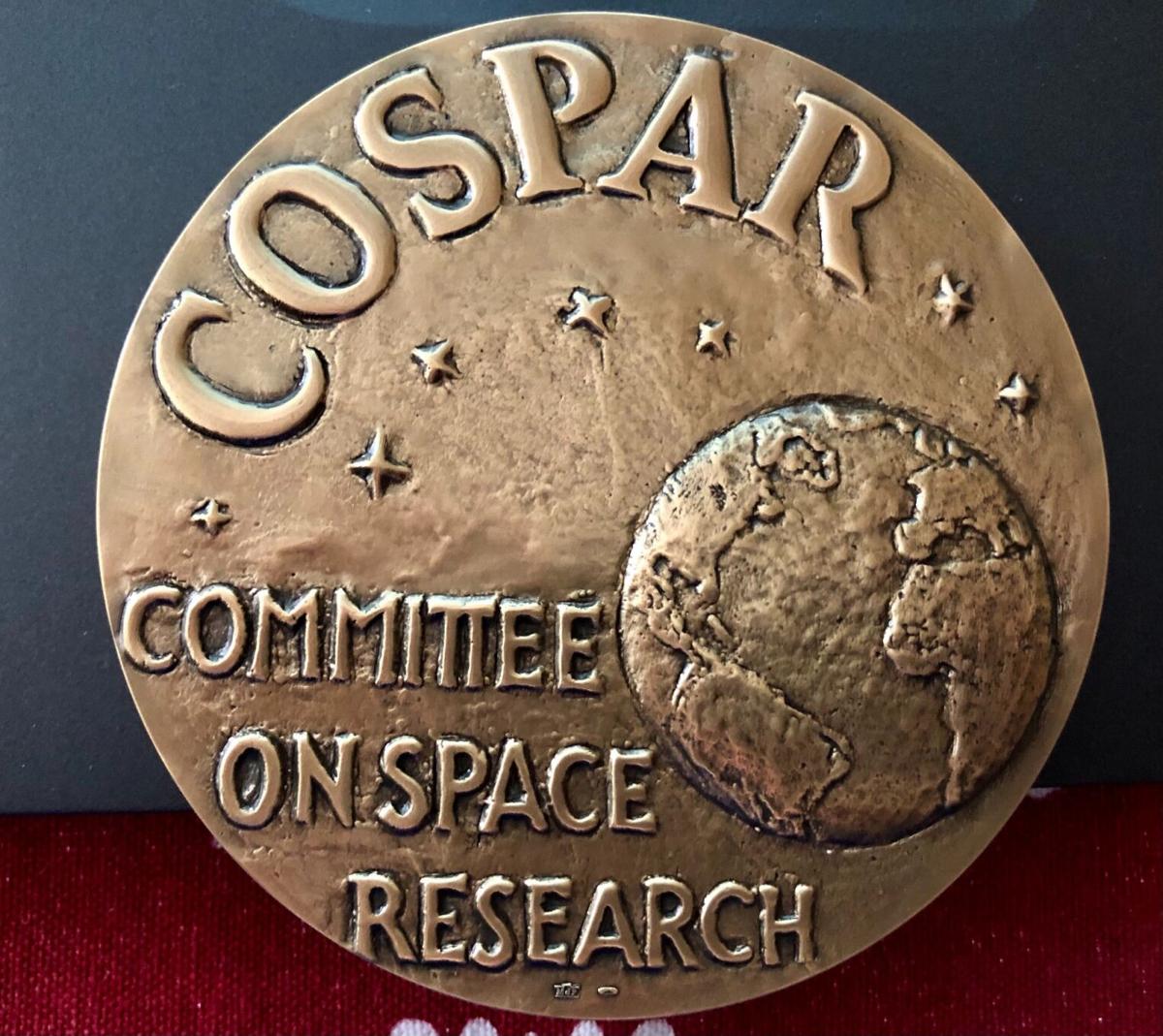 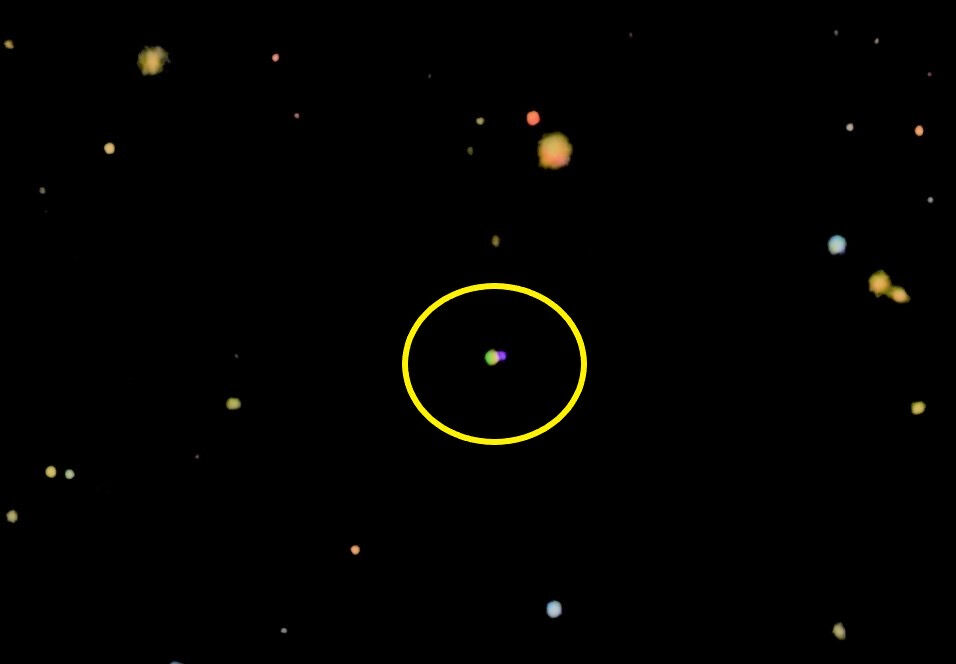 GREENSBORO — About 229 million miles from Earth, partway between Mars and Jupiter, there’s an asteroid named after, of all people, a dean at UNCG.

John Z. Kiss, the dean of UNCG’s College of Arts and Sciences, was honored earlier this year by the Committee on Space Research, which promotes international cooperation in all scientific study of space. In addition to awarding him a medal, the organization put Kiss’ name on a minor planet.

The medal “is just very rewarding,” said Kiss, a biologist who has devoted most of his professional life to studying plants in space. But having his name on an asteroid, he added, “is just really cool.”

COSPAR in January awarded Kiss its International Cooperation Medal, one of its top prizes. Since 2018, the organization has arranged with the International Astronomical Union, which is responsible for naming planets, stars and other celestial bodies, to name asteroids for COSPAR medal winners.

The asteroid now known as 8267 Kiss was discovered in October 1986 by an observatory in the Czech Republic. It orbits the sun from within the main asteroid belt that lies between Mars and Jupiter.

Kiss was honored for his work with Spanish scientist Javier Medina. (His asteroid is named 8333 Medina, by the way.) About a decade ago, the two were proposing similar but separate projects to study plant growth in space. A panel of their scientific peers recommended the two combine their efforts.

“We were delighted. That was our goal,” Kiss said in a recent interview. “One plus one equals more than two because we could share samples and share resources. ... Javier and I really wanted to make this work.”

Kiss and Medina led this three-part international research project, which began in 2013 and has involved NASA, the European Space Agency and scientists from other European countries.

Their project was designed to study how plant seedlings react to light and low gravity — something of pending importance as NASA prepares to send humans to the moon and, later, to Mars.

In 2017, Kiss and Medina got their plant seedlings — mouse-ear cress, which is a cousin of kale and cabbage — on the International Space Station. An onboard centrifuge that replicated the gravity found on both Mars and the moon allowed them to perform experiments they couldn’t do on Earth.

The seedlings seemed largely unfazed by the Mars portion of the experiment. But moon gravity, which is even less than that on Mars, seemed to confuse the seedlings.

“If you put a seed in the ground ... you want the stems generally to grow up and the roots to grow down,” Kiss said. “But it’s going to be more complicated on the moon.”

Kiss said he and Medina are still analyzing their data. They have published one scientific paper so far, with more to come.

Kiss, meanwhile, is turning his attention to a new project. He and a NASA scientist want to put a one-cubic-foot greenhouse on the moon to study how seedlings react to radiation and other factors. But competition for a research spot on moon missions is fierce, Kiss said, and NASA has already rejected one of their earlier proposals.

“That’s what I tell students,” Kiss said. “Even if you’re successful, you’re going to be turned down a lot. You need to be resilient.”

As this latest experiment takes shape, Kiss is looking forward to August. That’s when 8267 Kiss will come within about 110 million miles of Earth and will be easier to spot.

So far, Kiss has seen only images of his asteroid. “I got excited even though it’s a dot,” he said.

Having his name on an asteroid “gives you a minor sense of immortality,” Kiss added with a chuckle. “It’ll be there after I’m gone.”

How asteroids are named

The naming of planets, constellations, asteroids and other objects in the solar system is the responsibility of the International Astronomy Union, which was formed in 1919 in Paris.

Asteroids, also known as minor planets, get a provisional letter-number name when they are first discovered. After an asteroid is observed several more times, the IAU’s Minor Planet Center gives it a permanent number.

The person who discovers the asteroid has first crack at naming it, subject to approval by the IAU.

The IAU has several guidelines for names. Names must be short — no more than 16 characters — preferably one word and pronounceable. People and place names are OK. But names can’t be offensive or commercial. The IAU discourages pet names and forbids names of politicians and military leaders as well as political and military events until 100 years after they’re dead or 100 years after that event has passed.

The IAU also names stars and takes a dim view of the practice of selling star names to the public.

“Like true love and many other of the best things in human life, the beauty of the night sky is not for sale, but is free for all to enjoy,” the IAU says on its website. “True, the ‘gift’ of a star may open someone’s eyes to the beauty of the night sky. This is indeed a worthy goal, but it does not justify deceiving people into believing that real star names can be bought like any other commodity.”

Wake Forest on Tuesday became the second North Carolina university to mandate vaccines for its students before fall semester classes start in August.

New trustees named to the N.C. A&T and UNCG boards

Among the new trustees are the president of a Boston university, retired corporate leaders and current and former health care executives.

To get students back in the dorms, UNCG is offering them $1,500

The one-time grant will go to UNCG students who live in campus housing during the upcoming fall semester.

This UNCG professor has many different titles: professor, dean — and knight

Omar Ali was recently named knight in the Order of the Academic Palms for his work with French schools around the world.

The SpaceX rocket scheduled to take off Thursday for the International Space Station contains an experiment that looks at the effects of light and gravity on plants.

The position of the 8267 Kiss asteroid — nearly 223 million miles from the sun — is shown here on April 13. In August, the asteroid will come within about 110 million miles of Earth and will be easier to spot.

UNCG dean John Kiss with the International Cooperation Medal he was awarded by the Committee on Space Research.