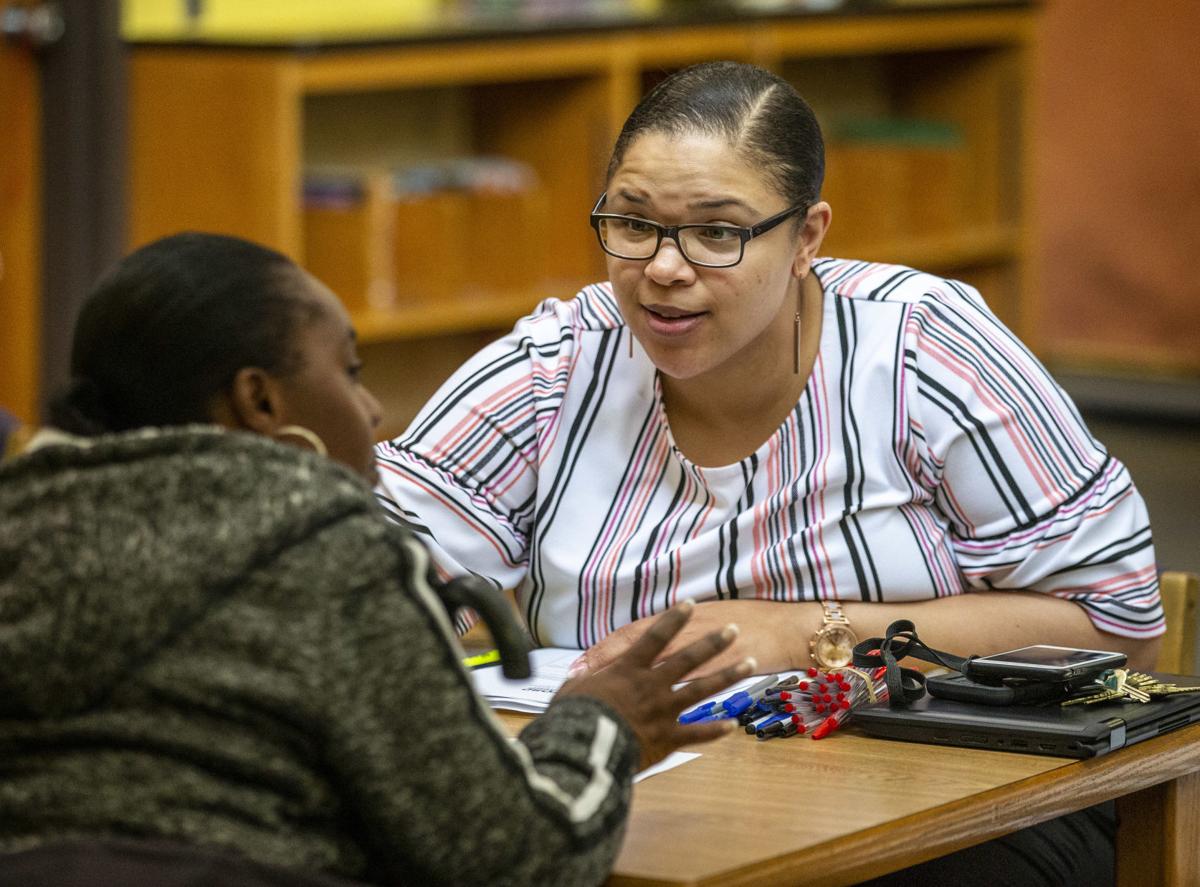 In this March photo from last year, Bessemer Elementary principal Chelsea Smith gives a laptop to a parent at the Greensboro school. To help kids who don’t have devices at home for distance learning, Guilford Education Alliance teamed up with local nonprofit Technology for the Future to help fill the gap. 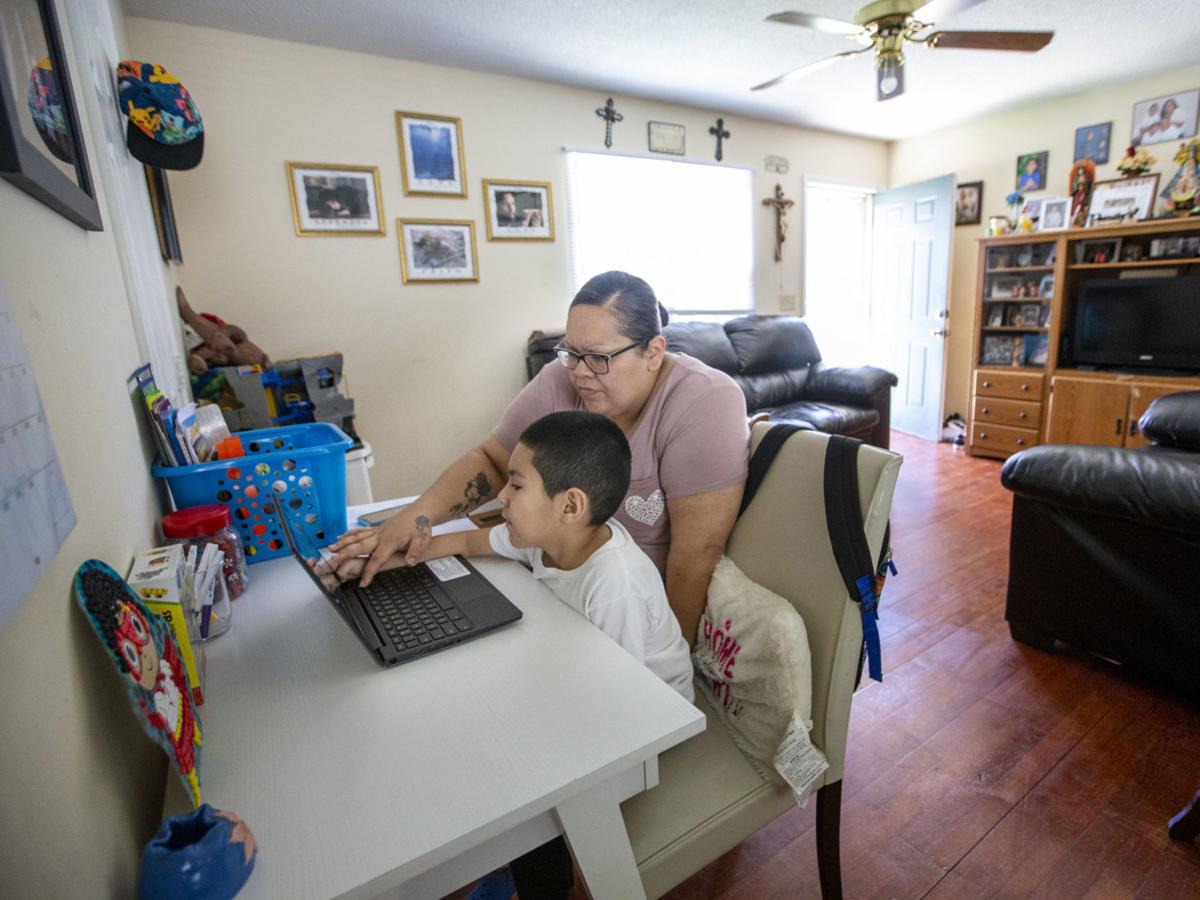 In this April 2020 photo, Angelica Esparza helps her 5-year-old son, Alex Razo, with his schoolwork using the refurbished laptop that was donated by Guilford Education Alliance and Technology for the Future at her home in Greensboro.

HIGH POINT — While busy supplying laptop computers for students in need, 30-year-old Adrian Martinca and his 25-year-old sister, Miriam Martincova, missed a deadline to submit a government form and now face being kicked out of the country.

Martinca, founder and chairman of the nonprofit Technology for the Future, said they have been working with Winston-Salem-based immigration attorney Helen Parsonage, who advised him they may be able to get a federal hearing if they can get 30,000 online signatures on a petition. Parsonage did not return phone calls or emails from The Enterprise.

Ana Santiago, a spokeswoman for Citizenship and Immigration Services in Miami, was skeptical an online campaign would solve the problem for Martinca and his sister, who were 8 and 4 when their parents brought them from the central European country of Slovakia to Canada and eventually to Kernersville and High Point 14 years ago.

“No visa lasts 14 years,” Santiago said. “If they’re already talking about a federal hearing, it’s because they have paperwork that tells them they’re illegal and that they have to go in front of a judge. I think they’re in the last desperate steps of trying to fix something they didn’t fix for decades.”

Martinca’s High Point-based business, AM Technology, and its charitable arm, Technology for the Future, employ about 15 people at their 112 Avondale St. site. For more than six years, the nonprofit has helped connect students with needed technology and equipment.

“Our visa was valid until 2023, but we had two schools that had a crisis,” Martinca said. “Me and my sister eventually lost track of time fulfilling that need of providing 250 computers to kids, and we accidentally missed our May 3 deadline to renew the I-94 (a form used by U.S. Customs and Border Protection to keep track of people who are not U.S. citizens or lawful permanent residents) but still with a valid visa. We couldn’t fly, so we drove up to the Canada border late on May 20 to renew our I-94.”

After their arrest, the siblings’ visa was canceled. They were told if they go to court and can’t prove that they were not late, they would get deported and banned from the United States for three to 10 years, Martinca said.

“Instead, we took a voluntary departure, so they offered us 30 days to leave the United States,” Martinca said. “They told us to move back to Canada within 30 days, like we don’t want you here. ... Literally tens of thousands of children don’t have computers and they are asking us to just walk away.”

Martincova took the situation public when she wrote a change.org petition asking for signatures of support. She recalled how frightening it was when she and her brother were arrested at 2:30 a.m. on May 21 after they had traveled to the U.S.-Canada border.

“We had not known that being 2.5 weeks late for the renewal would mean that we were no longer welcome in America, that the visa we had counted on ... would be so quickly and easily canceled and taken away,” Martincova wrote. “The process to be able to return will take several months, during which time we will lose much of the progress we have made, and many of those seeking our help will be neglected and our ability to currently employ will be downsized.”

Last year, Technology for the Future donated nearly 15,000 computers to students across the country, Martinca said.

“We donated 10,000 just in Guilford County and about 2,500 just to High Point students,” Martinca said. “We did a challenge grant, and by the end of it we contributed over $1 million toward technology for kids here. Now we essentially are in a place where we sacrificed everything and everything is being taken from us.”

Rob Russell, who works as philanthropy coordinator for Technology for the Future and has prior military and police service experience, had some familiarity with what the siblings are facing because he recalls it took six years for his immigrant wife to become a citizen.

“I’ve seen this on a personal level,” Russell said. “It’s gnarly and expensive. It’s intense. We’re taking it seriously. I believe in him and his intentions. He’s making a lot of sacrifices to help get technology to students.”

Martinca said he feels he has sacrificed his family and friends in Slovakia and Canada just to be able to be in the United States and pursue the American Dream.

“My family has sacrificed everything just to be here, just as I have sacrificed for the community always,” Martinca said. “I was always taught the community is family. If I was going to accept leaving, the 22 years of sacrifice that we have made as a family would be thrown away.”

Heat alerts in effect for parts of the South and Northwest

Heat alerts in effect for parts of the South and Northwest

At the Z. Smith Reynolds Foundation, Guilford County Schools Chief of Staff Nora Carr rejoins former district Superintendent Maurice “Mo” Green, who is the foundation's executive director. Green, who joined the district as superintendent in 2008, left in 2016 to lead the Winston-Salem nonprofit.

The bonus, announced Wednesday, is open both to teachers new to the district or who would be moving from a district school to one of the designated schools. To get the signing bonus, teachers must commit to teach for at least three years.

Some educators say these new policies are so vague that they will have a chilling effect, with parents going after teachers for discussing anything in class they dislike.

You've got questions about the new mask rules for N.C. schools. We've got answers.

For now, Gov. Roy Cooper says it will be up to local school boards to actually enforce the state guidance.

The university is using federal pandemic relief funds to create new scholarships to help A&T students pay for their education.

The Virginia Dare Room has been renamed. It's now the Oakley Family Reception Room.

North Carolina has received $36.6 million in federal Charter Schools Program grant money to help increase the number of educationally disadvantaged students attending charter schools. But the Network for Public Education charges that the state has used the money to help fund "white-flight alternatives to the local public schools."

In this March photo from last year, Bessemer Elementary principal Chelsea Smith gives a laptop to a parent at the Greensboro school. To help kids who don’t have devices at home for distance learning, Guilford Education Alliance teamed up with local nonprofit Technology for the Future to help fill the gap.

In this April 2020 photo, Angelica Esparza helps her 5-year-old son, Alex Razo, with his schoolwork using the refurbished laptop that was donated by Guilford Education Alliance and Technology for the Future at her home in Greensboro.