This article is part of an occasional series about designs for new schools. The projects are part of a $300 million bond referendum for Guilford County Schools that voters approved in 2020.

GREENSBORO — One of Greensboro’s oldest schools is set to be reborn and rebuilt, with an approach that frames learning as an adventure, and a design partly inspired by the woods that will surround the new building.

“We really took the clues from this idea of the tree canopy to protect, shelter and collect our students,” said architect Gregor Lewis.

Peck Elementary School, in south Greensboro near the city’s Glenwood neighborhood, dates to 1929. It has some later additions, but its condition has declined and it is up for replacement in the first phase of Guilford County Schools’ facilities master plan. The county is borrowing to pay for the projects by selling bonds. Voters gave the county the go-ahead for the bonds for the first round of projects in 2020 and will consider another round of bonds for additional projects on the ballot this May.

New Peck will differ from the old Peck in a few key ways. The elementary school will turn into a “K-8” school, become an “Expeditionary Learning” magnet, and move to the other end of its current site. All three changes are factors in the school’s design.

The upcoming transformation to a K-8 school has meant designing the new school and campus to serve more students and tailoring the spaces to a wide range of ages.

About 900 students, from pre-K tots to eighth graders in their early teens, will occupy what’s expected to be a three-level building. The district estimates it could open in 2024 and cost about $41 million. Design work is ongoing.

Guilford County Schools is creating a K-8 school at the Peck site for a couple of reasons, according to district spokesman Janson Silvers. One is the projected growth in Smith High School’s attendance zone, where Peck is located. The district’s plan also tries to avoid the operational inefficiencies that can come with smaller schools.

Right now, most of the district’s schools are just elementary, middle, or high schools. Some of the rare exceptions include Johnson Street Global Studies, a K-8 school, and Penn-Griffin School for the Arts, a 6-12 school. Both of those grade configurations are likely to become a little more common in the next couple of decades, if the district continues to follow the facilities master plan.

During a recent board meeting, Superintendent Sharon Contreras said schools that combine both elementary and middle school-aged students are more common in other districts, and the combination does not always mean a total fusion.

“It’s a culture that evolves in the school, that they work together, but in some cases they are separate,” she said.

Lewis, who works for the architectural firm SHP, explained to the school board in January the early draft designs include separate bus-rider entrances for pre-K through fourth grade, and fifth through eighth grades, as well as separate areas for their academic classrooms.

He said that the design team thought keeping the older and younger students away from one another in that way could help create a sense of safety. 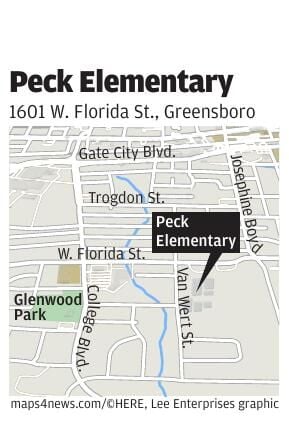 Grades would be paired, Lewis said, with common spaces where the two grades — pre-K and kindergarten, for example — could collaborate together.

He pointed to the common spaces as an example of the way the school is being designed to reflect Expeditionary Learning.

That’s the educational approach that Guilford County Schools has selected for Peck as it transitions to a magnet school. Typically, families are assigned to a school based on the attendance zone where they live. With magnet schools, families choose to send their child there and students don’t have to live in the school’s attendance zone.

Each magnet school or program typically has something unique to help draw students, but that varies. It could be a theme, such as languages or science, or an approach, such as Montessori, single-gender education or Expeditionary Learning.

The EL approach dates to the early ‘90s and a partnership between the Harvard Graduate School of Education and Outward Bound, USA. According to EL Education’s website, the model combines, “the character-infused philosophy of Outward Bound founder Kurt Hahn, which focuses on teamwork, courage, and compassion” and an, “active approach to learning crafted by leading Harvard scholars.”

The district sees Expeditionary Learning as an exciting opportunity for students that would help them gain skills that will help prepare them for high school and life after graduation, Silvers said in an email. He explained the district also wants to provide more options for families, given the high parent demand in Greensboro for choices about where to send their students to school.

Many of the new schools the district looks to build will have more flexible and collaborative space, Lewis said, and architects are especially trying to push those goals for Peck, due to the expeditionary learning theme. He talked about having classrooms that could be opened up to the commons area if needed, or closed off at other times, and having movable furniture of various sizes and functions that could be useful for various group projects or activities.

While the new school is built, leaders expect Peck students will continue learning in their old school. That has meant having to find a new place on the site for the new Peck, and designing the new school to reflect challenges and opportunities presented by the new location.

The new Peck will be on the back of the existing school’s site, in a wooded, hilly area. Once the old building is demolished, the front of the site will feature play fields for the students and the community. At the back of the site, the new school is expected to be built into a hill in a way that results in two of its three levels being ground levels. There will be a lower level where the buses will come in and a main entrance atop the hill on the other side at the second level.

The woods around the school inspired a design element that appears on multiple sides of the building in the draft designs. Tall pillars, similar to tree trunks, connect with a canopy-like roof that extends past the building’s edge. Cutouts in that roof allow light to filter through to the ground below, in patterns that change throughout the day. It is meant to evoke the sun shining down through the leaves in a forest.

The early designs also include a courtyard between the school’s academic wing and the shared spaces for subjects like music and art. The idea, Lewis said, is for students and their teachers to have quick, direct access from their classrooms to a secure space for outdoor learning.

“Also, we envision these expeditions continuing into the woods so that they can take kind of guided tours to learn about the animals and the plants and everything that’s growing on the forest floor,” he said. “All that stuff that we all did when we were kids.”

A reimagined Peck Elementary takes inspiration from the trees around it. A Triad-made thriller gets a local premiere. A mobile home fire claim…

District leaders expect that money to touch each school in the district and for the work to take a decade — at a minimum — to complete. "We have crumbling walls and crumbling ceilings," said Ged O'Donnell, the principal of Grimsley High School.

County voters in November approved a school bond referendum that allowed elected officials to borrow the money to pay for the much-needed work.

Michelle Reed, the chief operating officer of the operations business unit for the city of Seattle, is set to join the district in August. As the school system's COO, Reed will head the district's transportation, maintenance, facilities and technology departments.

Under proposal, new Montessori school at Archer would be part of larger 'choice' zone

The idea hasn't been welcomed by some parents, but Superintendent Sharon Contreras said it didn't "come out of the blue."

Superintendent Sharon Contreras and her staff have a plan to build new replacement fields at Grimsley but the district does not expect those could be ready any sooner than spring 2025. In the meantime, Grimsley will need to move games and practices elsewhere.

Whoa! Scientists finally know why these dolphins are lining up to rub against coral

Vladimir Putin often got frustrated with Donald Trump, here’s why

Vladimir Putin often got frustrated with Donald Trump, here’s why

View of the courtyard for Peck Expeditionary Learning School.

View of the bus-rider entrance for the planned Peck Expeditionary Learning School. About 900 students, from pre-K tots to eighth graders in their early teens, will occupy what’s expected to be a three-level building. The school could open in 2024 and cost about $41 million. 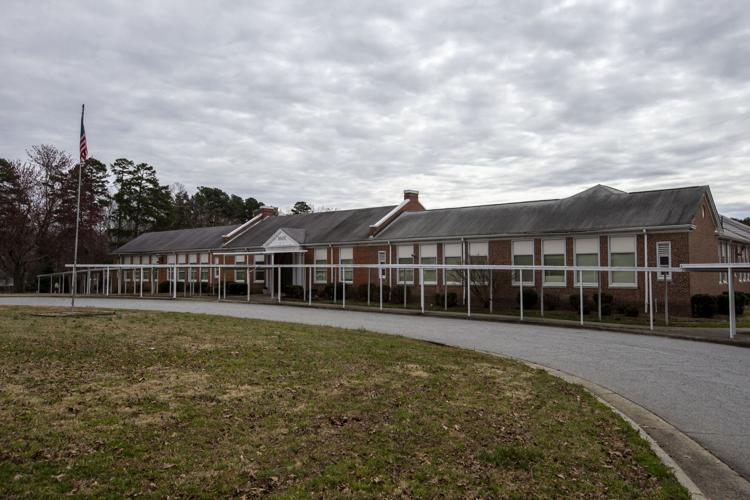 Peck Elementary School in Greensboro is among schools set to be renovated or replaced through bond money approved by voters in 2020.